Home » How LAZADA makes an enemy out of royalists, Thai military and royal shops

How LAZADA makes an enemy out of royalists, Thai military and royal shops

The online shopping app LAZADA has become the target of a boycott by the Thai authorities and netizens in protest against their online sales campaign that has been seen as mocking the disabled, with royalists also angry that it somehow defames the monarchy.

Examples of the two ads can be seen in the first minute of the video made by a far-right news agency, TOP News.

The online video advertisement made its first appearance on 4 May, aiming to promote Lazada’s 5 May sales known as “Lazada 5.5”. It portrayed Aniwat “Nara Crepe Katoey” Prathumthin fooling around with Thidarat “Nurat” Chaokuwiang, a hearing-impaired influencer who sits in a wheelchair.

The video was posted on Aniwat’s social media channel. Prior to the post, Aniwat also posted a video ad displaying the two sitting alongside Kittikoon Thammakitirad, the owner of “Mom Dew Diary”, wearing a costume that can be seen as similar to those worn by royalty.

Reactions to the posts took many forms. While positive cheering stayed in social media, anger and dissatisfaction with Lazada found its way offline .

Netizens who found the ads in bad taste have a problem with how the content seems to make fun of disability.

In response, Intersect Design Factory, the media agency who was assigned to coordinate the video production and promotion, issued an apology on 5 May for the improper content, insisting that it had no intention to mock the disabled or connect the characters in the ads to other persons or incidents.

Lazada followed suit on the morning of 6 May, saying that they well understood that the content had affected society emotionally and undermined human values. They had removed the posts as soon as they learned of the content.

The statement also expressed their apology and said that they would take responsibility for what happened to society, clients, sellers, and partners. Lazada is ready to improve their working process to prevent the same thing from reoccurring.

On the afternoon of 6 May, a dozen people under the banner of the People’s Network Protecting the Monarchy, a coalition of various pro-monarchy groups, went to Bhiraj Tower on Sukhumvit Road where the platform’s office is located, demanding an explanation from company executives over the ads that “affect the hearts of Thais countrywide”. 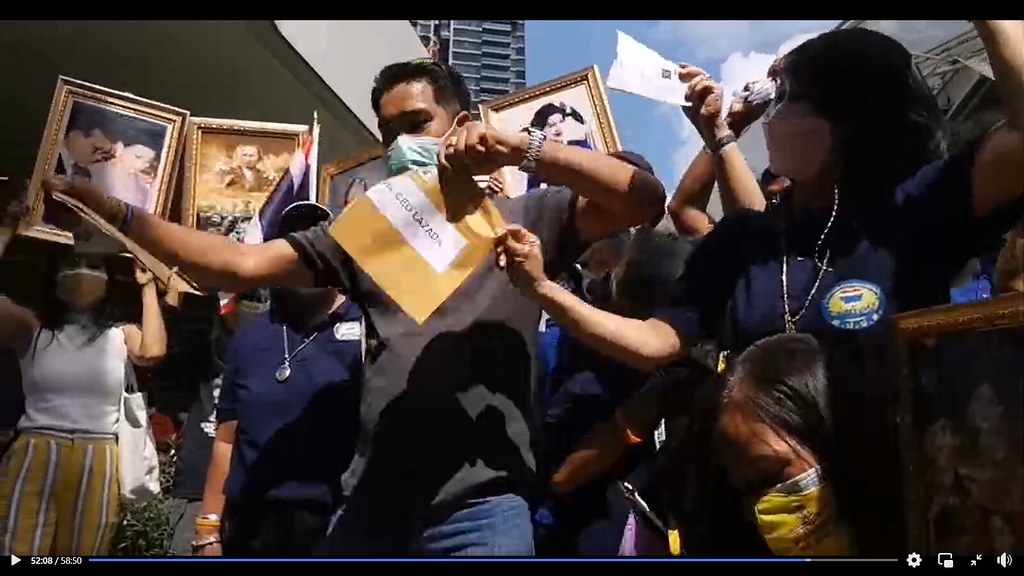 A protester tears an open letter aimed to deliver to LAZADA executives.

In the morning before the gathering, the group also started an online campaign urging people to stop using Lazada under the hashtag #BanLAZADA. Other similar hashtags seen are #banlazada and #แบนLazada. People have posted criticisms and declared that they have either deleted the app or stopped using it.

Activist Srisuwan Janya also filed a complaint against the two companies and Aniwat under the Computer Crimes Act and the lèse majesté law.

Enemy of the state

Lazada is a subsidiary of Alibaba, a Chinese conglomerate. In Southeast Asia, it operates in Thailand, Vietnam, Malaysia, Singapore, Indonesia and the Philippines.

This is not the first time that a company has suffered negative popular feedback over a campaign like this. Recently, a failed April Fool’s Day prank shook Thai Vietjet Airline after they posted a joke promotion of a new route from Nan Province to Munich starting at 1,010 baht, which some royalists found offensive to the monarchy.

But what is different this time is that it is not only netizens who are seen expressing anger at the company, but official agencies and companies related to the royal family are also abandoning Lazada.

On 9 May, a ‘most urgent’ order  was sent from Royal Thai Army (RTA) Chief of Staff Gen Santipong Thampiya to all RTA units countrywide, completely banning personnel and the businesses related to them from using Lazada. Commanders will be held accountable for any violations.

The order states that action was taken due to the improper content in the company’s campaign that affects the hearts of Thais and undermines humanity.

The order was reported to be issued on the day after RTA Commander-in-Chief Gen Narongpan Jitkaewthae ordered personnel not to allow Lazada deliveries to RTA premises.

The Royal Thai Navy commander and Royal Thai Air Force spokesperson also urged Thai not to tolerate what LAZADA has done, saying the ad was not creative as they make fun of a person's disabilities. The two did not order a ban on LAZADA like the RTA did.

On 7 May, Wansook Shop, a retail outlet of the Department of Corrections that sells products made by prison inmates, also announced a temporary closure of their store on Lazada. They urged their customers to see them on Shopee, another shopping app, Facebook and LINE. 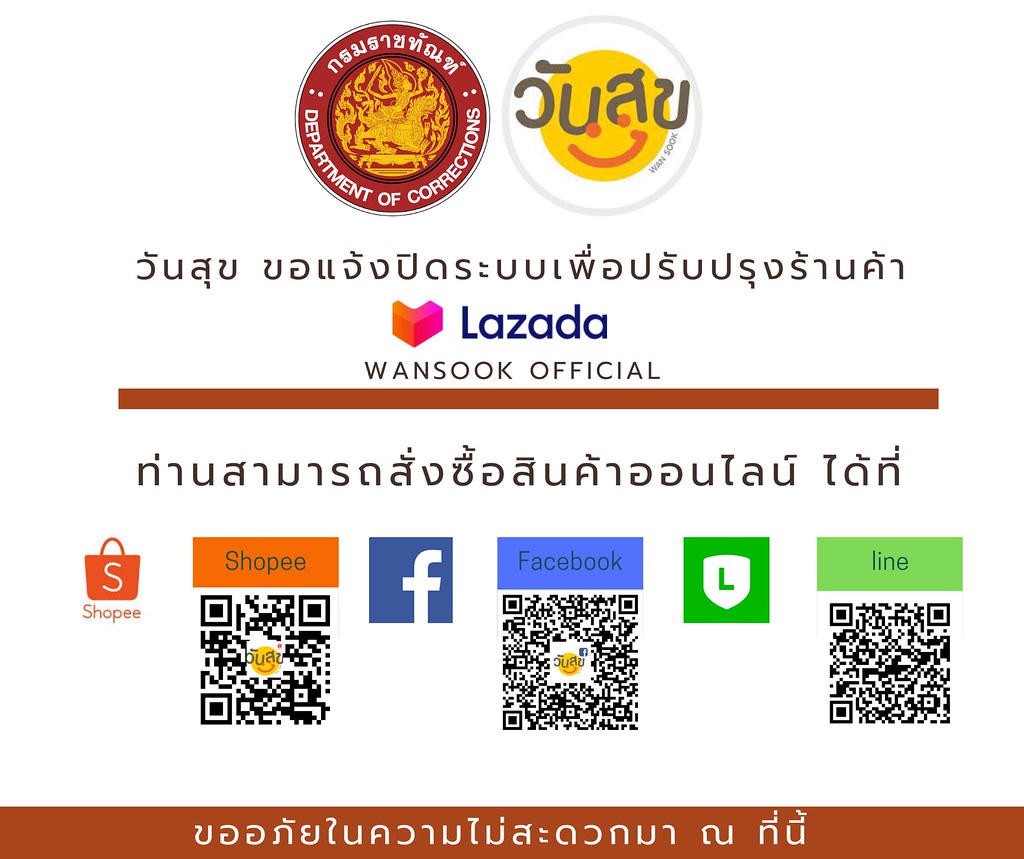 On 6 May, Doi Tung, an organic product store of the Mae Fah Luang Foundation under Royal Patronage, also announced the temporary closure of their shop on Lazada while they review the situation. 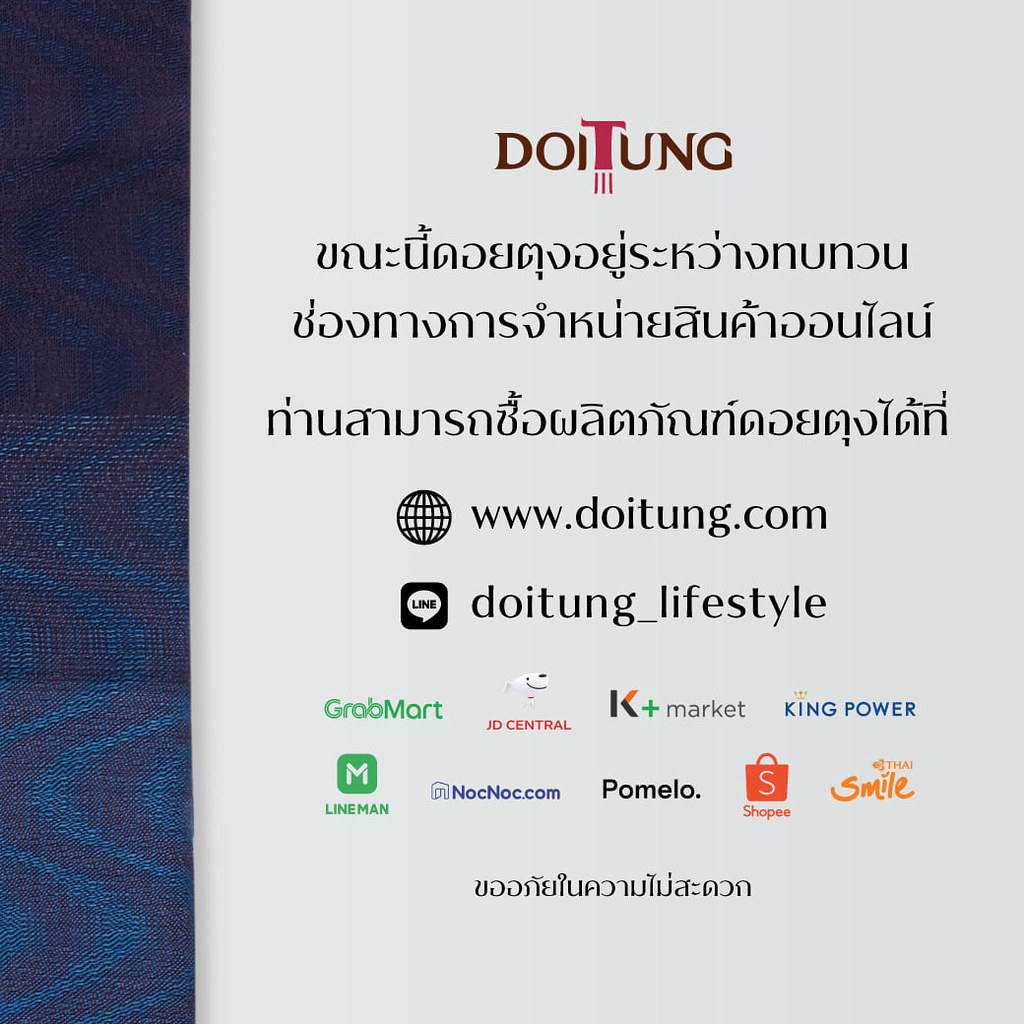 Doitung announcement on a temporary closure

In the same day, Doikham, a juice producer originating from one of the royal projects initiated to combat communism during the Cold War period, and the Royal Chitralada Project also announced the temporary closure of their shops on Lazada. 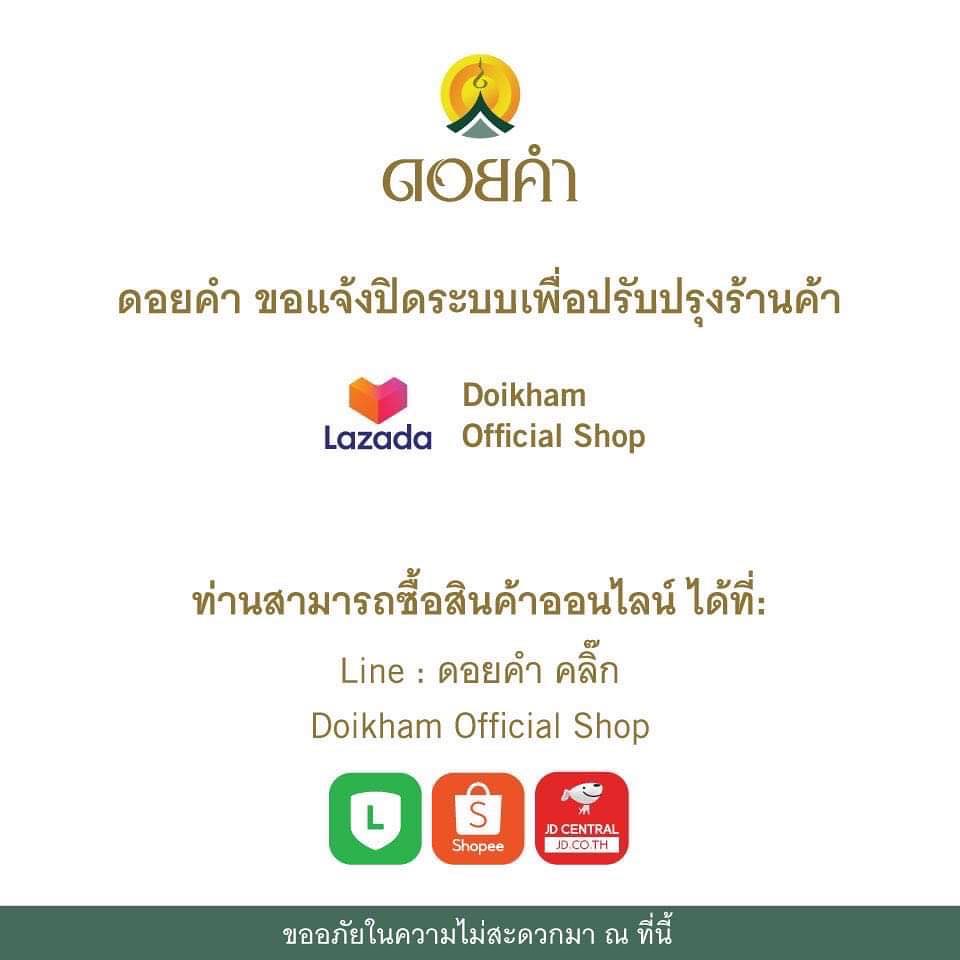 Doikham announcement on a temporary closure 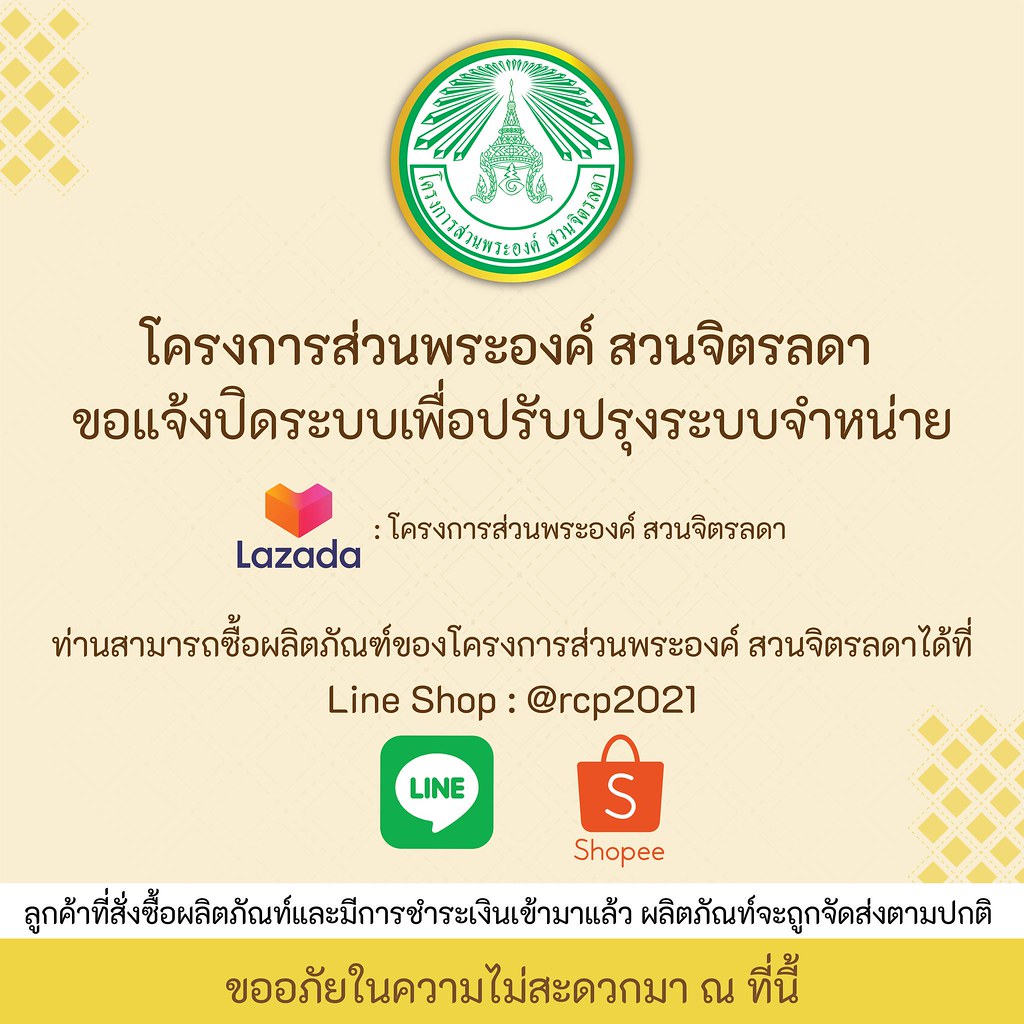 The Royal Chitrlada Project announcement on a temporary closure

The announcements by Wansook, Doikham, and the Royal Chitralada Project are similar in format. There has been no official statement about this as of 9 May.

From witch-hunting to cancel culture

As of 9 May, no reports from either companies or government agencies have identified which member of the royal family was the intended target of what pro-monarchists see as a parody.

From the Vietjet Air and LAZADA incident, it can be seen that the violence and intensity of the royalists over issues they deem as infringements upon the monarchy have decreased in comparison to 2016 when the popular late King Rama IX passed away.

At that time, there were public displays of vigilantism against those who did not comply with the countrywide mourning practice of dressing in black. Posting messages about the monarchy other than extolling it invited reprisal.

Public concern over vigilantism spiked in the aftermath of mass protests in front of the homes of people accused of lèse majesté. The first such incident occurred in the southern province of Phuket, followed by others in Phang Nga and Surat Thani, before spreading to other regions. The goals of the mobs were generally to arrest the victim, expel them from the area or force them to kneel and apologise in front of the late King’s portrait. 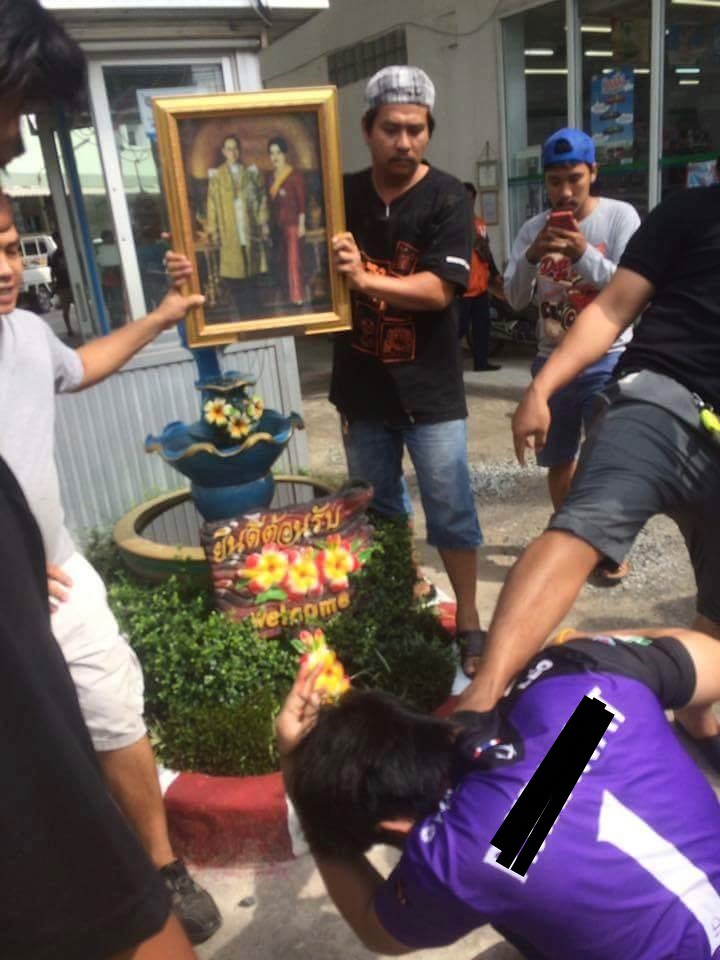 A man, later accused of lèse majesté is beaten and forced to kneel before the late King's portrait as he posted on Facebook 5 days after the late King Rama IX's death, saying he wanted to sell coins that have his portrait on it. (Photo from Facebook)

With the broader debate about the monarchy after the surge of mass protests in 2020 calling for political and monarchy reform, the fate of Lazada and the possible financial damage are still unclear.

Anon Nampa, a human rights lawyer famous for his ground-breaking speech on monarchy reform, said on Facebook that the world has changed. Whatever happens to Lazada will not affect them much as it is just a case of a “dog barking to cheer up its master”.

Pavin Chachavalpongpun, a Thai academic in exile, known for his criticism of the monarchy, posted on Facebook questions about the royal defamation complaint against Aniwat as the law only protects the King, the Queen, the Heir apparent and the Regent. Even if it was alleged that the ad aimed to mock Princess Chulabhorn, the Princess is not protected by this law.

Pavin also noted on Facebook the Thai military's role in joining the Lazada boycott, questioning if this is a proper role for the military.

Despite shifting public attitudes regarding the monarchy, Section 112 of the Criminal Code, also known as the lèse majesté law, carrying a 3-15 year jail sentence is still being enforced, jailing people for expressing their opinions about the monarchy.

After it was brought back into use in November 2020, 191 people have been charged under this law in 205 cases, 106 of which have gone to trial, according to Thai Lawyers for Human Rights.

As of 9 May 2022, 7 people are in prison on lèse majesté charges. Two have been found guilty; one of them, Anchan, was given 42 years in jail by the Supreme Court in January 2021. The remaining five are detained pending trial with their bail revoked due to their activism and social media posting.