One activist released, one denied bail

Activist and human rights lawyer Anon Nampa remains in detention, after he was denied bail by the South Bangkok Criminal Court despite being granted bail by other courts, while student activist Parit Chiwarak was released yesterday (24 February 2022) after his lawyer presented evidence of his enrolment at Thammasat University. 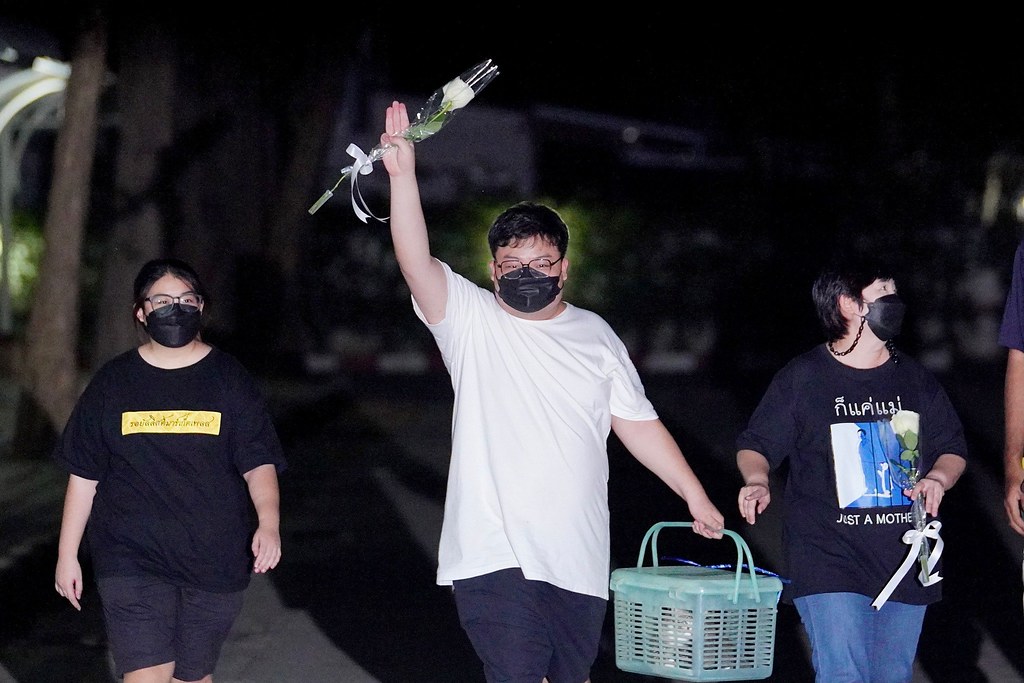 On Tuesday (22 February 2022), the Ratchadapisek Court granted bail for Parit and Anon on several royal defamation charges relating to protests in 2020 – 2021, requiring a security of 2,070,000 baht. They were also given the conditions that they must not participate in activities which damage the monarchy, cause public disorder, or obstruct court proceedings. They must wear an electronic monitoring bracelet and are not allowed to leave their residence between 21.00 – 6.00 without court permission, unless for a medical emergency, to go to class, or to contact a police station, the public prosecutor, or a court.

Their security was to be covered by the Will of the People Fund, a bail fund for those facing legal prosecution for participating in pro-democracy protests. However, the fund did not have enough money on Tuesday evening to cover their security, since it has just paid 600,000 baht in bail security for a person accused of throwing a plastic bag containing red paint onto two portraits of King Vajiralongkorn in Nonthaburi and Pathum Thani.

A call for donations was put out by the Fund and other activists. Within less than 4 hours, the Fund raised around 10 million baht and was able to post bail for Parit and Anon, as well as having sufficient funds to post bail for other protesters.

The court granted them a temporary release period of 3 months, valid until 22 May 2022. However, Parit and Anon were not released on Tuesday night, as they were still detained on charges under the jurisdiction of other courts.

The South Bangkok Criminal Court, however, denied Parit and Anon bail. The court’s executives ruled that Anon’s request for bail for charges relating to the 3 August 2021 protest on the grounds that he has to work and take care of his family is a “common matter” and not enough reason to change the Appeal Court’s order to deny him bail. For charges relating to the 18 November 2020 protest, the court executives ruled that Anon has committed several offenses and is likely to cause more damage if released.

For the charges facing Parit relating to the 20 December 2020 “crop top” protest at Siam Paragon, the court required Parit to present evidence of his enrolment at Thammasat University, his class schedule for the second semester of the 2021/2022 academic year, along with a letter from the university certifying the evidence, before they would consider his bail request.

It was reported that the order denying them bail was not signed by a specific judge. Meanwhile, the list of the chief justices of the South Bangkok Criminal Court has been taken down from its website. 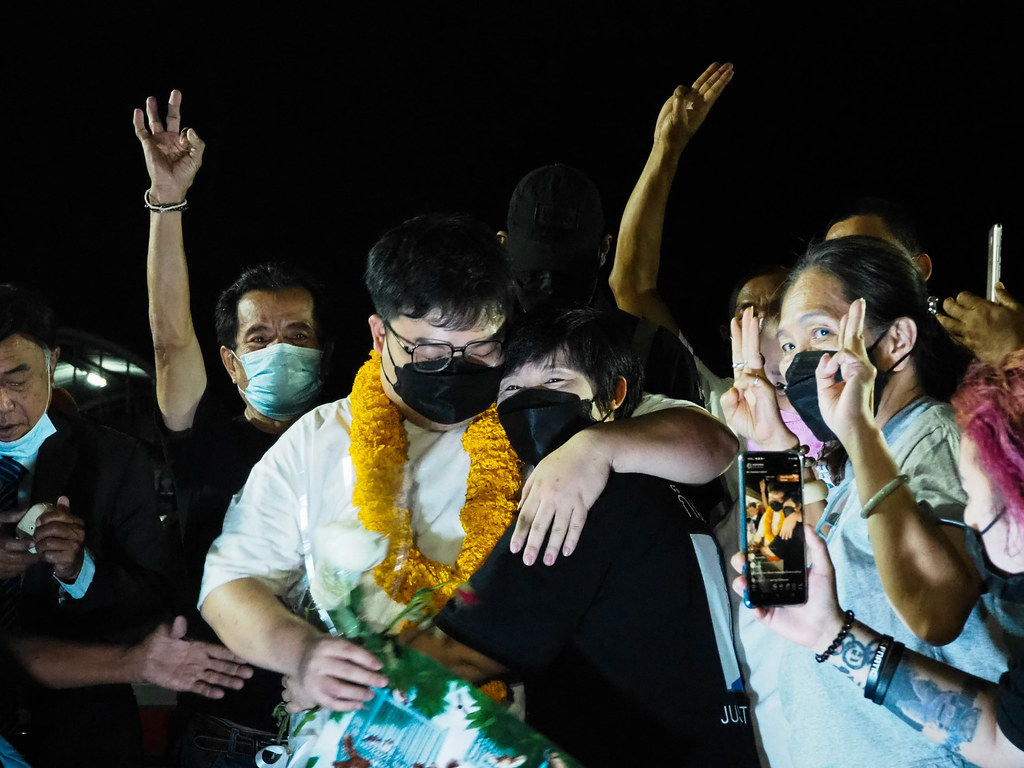 Parit is greeted by a crowd of supporters upon his release

On Thursday (24 February 2022), Parit’s lawyer submitted documents confirming his student status, certified by the Dean of the Faculty of Political Science, Thammasat University, to the court as required. He was subsequently granted bail on a 200,000-baht security. His temporary release order is valid until 24 May 2022, as the court ruled to release him for a three-month period to allow him to continue his studies.

The court set him the conditions that he must not participate in activities which damage the monarchy or the court, obstruct court proceedings, or cause public disorder. He is also prohibited from posting "seditious" messages on social media.

The court requires him to wear an electronic monitoring bracelet, and set him a curfew between 18.00 - 06.00. He is also not allowed to leave the country without court permission.

Parit was released on Thursday evening (24 February 2022), after spending 6 months in prison. Meanwhile, Anon remains in detention. He is facing 14 royal defamation charges and is being detained on one count of the charge, which is related to the 3 August 2021 “Harry Potter” protest, during which he gave a speech on the monarchy reform movement. 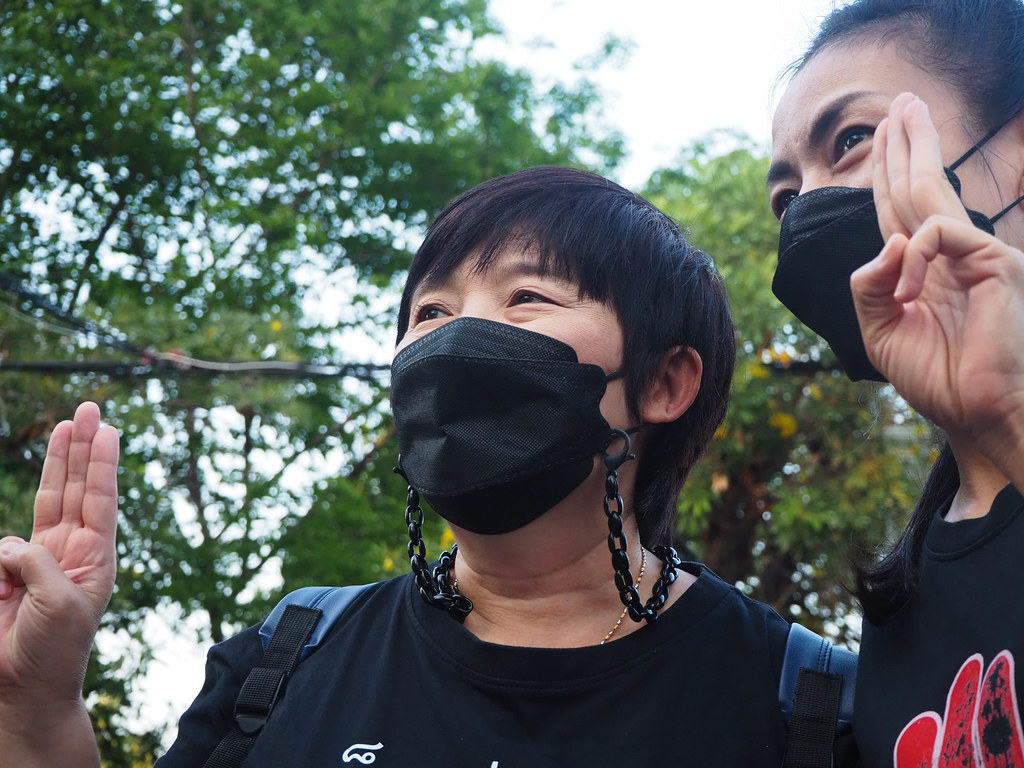 Parit’s mother Sureerat Chiwarak came to the Bangkok Remand Prison, along with a crowd of supporters, to wait for Parit’s release. She said that Parit is now everyone’s son as well, since his supporters have cared for him. She is concerned about his safety, and asked his supporters to look out for him when he is in public, and said that she is still worried and does not want him to return to prison. As for his studies, Sureerat said she has discussed with his professors about what they should do, since Parit did not receive the textbooks sent to him while he was imprisoned, but she would have him catch up on his classes once he is released. She also said that she will not interfere with his activism and that she will always give him freedom and respect his ideas.

Upon his release, Parit thanked the public for raising funds to post bail for him and Anon, and said that it shows that the movement has not died. He also thanked officers who facilitated his case at court. He said that he has received the kindness of his supporters, who got him through his imprisonment.

He said that he understands that he is a political prisoner, and that a fighter could fight from anywhere, but even though it was a happy day for him, several other political prisoners remain in detention, and he would like them to receive justice as well. He said that he respects the conditions that court gave him, but that he believes that those conditions cannot limit the people’s opinions.