Members of the Bang Kloi indigenous Karen community who came to join the protest organized by the People’s Movement for Just Society (P-Move) returned home yesterday (3 February 2022) after the government agreed to set up an independent committee to solve community rights issues facing them. 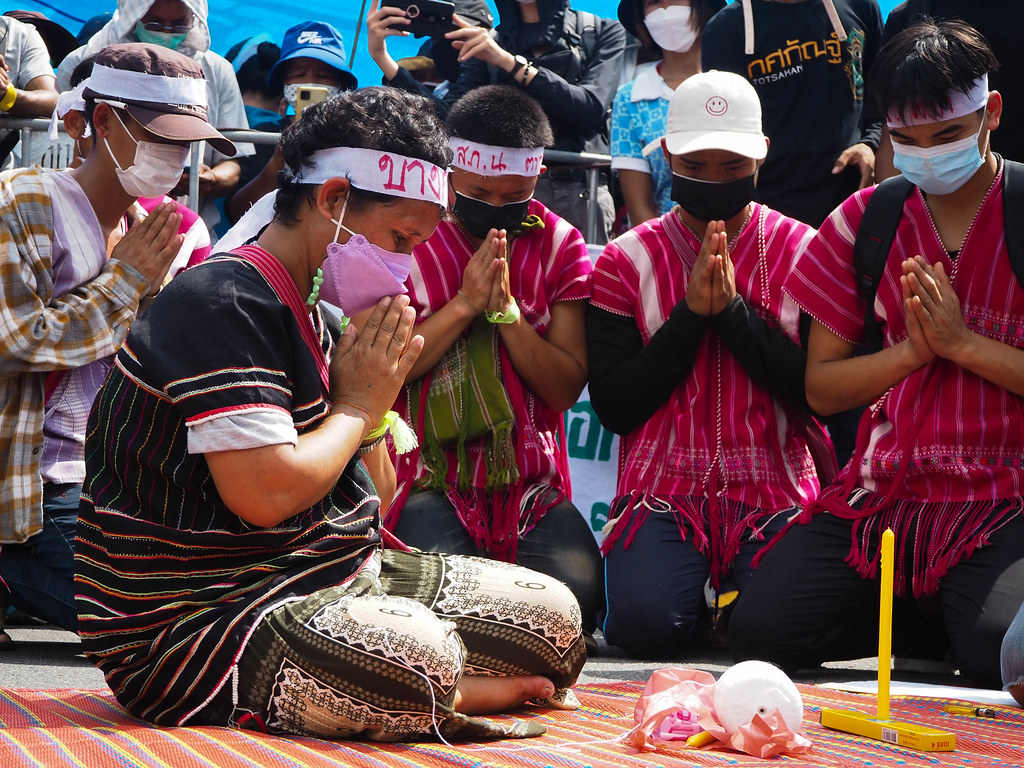 The community members came to Bangkok to join the protest organized by P-Move, which addressed land rights and community rights and occupied the sidewalk opposite the UN headquarters on Ratchadamnoen Avenue from 20 January 2022 before marching to Government House. After being stopped by a police blockade, the protesters occupied the Nang Loeng Intersection until yesterday (3 February 2022), when they ended their protest after their demands were answered by the government.

The Bang Kloi indigenous Karen community now lives at the Pong Luek-Bang Kloi Village in Kaeng Krachan National Park, where they were forcibly relocated in 1997, and once again in 2011, when park and military officials raided the Bang Kloi Bon and Chai Phaen Din (meaning “heart of the land”) villages, which are located deep in the Kaeng Krachan forest, and burned down their houses and rice barns.

Throughout the past 25 years, the community has faced unresolved community rights issues. They were not allocated land for agriculture as the authorities promised them, and the land they did receive was not suitable for growing crops, while they are not able to practice their traditional rotational farming method. Many members of the community are also still in the process of getting Thai citizenship, and so missed out on land allocation and welfare. The Covid-19 pandemic has worsened the issues, as many of those employed outside the village began to lose income.

Of the 87 people arrested, 36 were minors and the authorities did not press charges against them. The rest were charged with trespassing on national park land. 29 people received a fine, while 22 were temporarily detained at the Khao Kling Prison before being released after two nights.

On 26 July 2021, the Kaeng Krachan Forest Complex was named a natural World Heritage site despite ongoing concerns about human rights violations against indigenous communities in the forest area and recommendations from the International Union for Conservation of Nature (IUCN) and the UN Special Rapporteur on the rights of indigenous peoples, who pointed to human rights violations against indigenous Karen communities in the Kaeng Krachan forest, from forced evacuations and lack of a proper remedy, to arrest and legal prosecution, as well as the resulting food insecurity. Meanwhile, the community’s situation has not improved. They are suffering from food scarcity and have to rely on donations, and are not earning enough money from selling their produce to cover food costs. They also face an epidemic of malaria and dengue fever, and found visiting hospital to be difficult due to travel costs and the difficult route from their village. 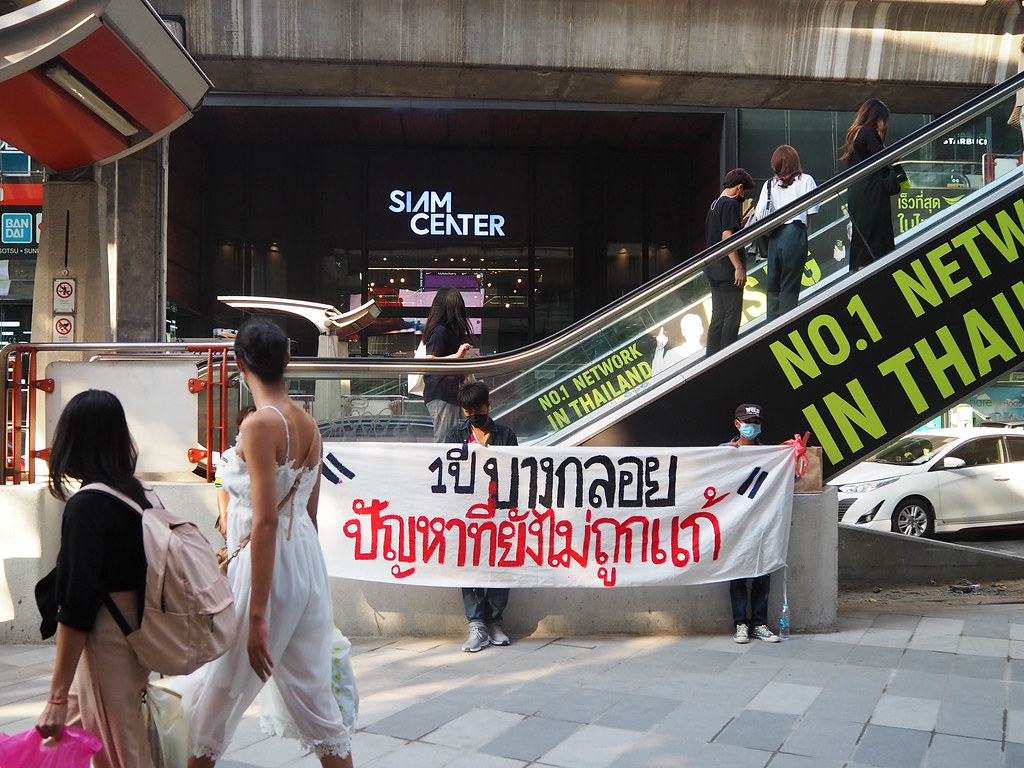 Community members standing at the escalator going up to the Siam BTS station holding a banner saying "1 Year of Bang Kloi and unsolved problems”.

Last Saturday (29 January 2022), the community members joining the P-Move protest staged a flash mob, during which they walked around the Pathumwan Skywalk and Siam Square shopping district holding a sign saying “1 Year of Bang Kloi and unsolved problems”. It was around the same time last year (2021) when the community members came to Bangkok to demand protection for those who had chosen to return to Chai Phaen Din and to call for their right to return to their ancestral home.

On Sunday (30 January 2022), they staged a ‘car mob’ protest, driving from Phitsanulok Road, where they were occupying the street with P-Move protesters, to the Ministry of Natural Resources and Environment (MNRE). Paint was then thrown onto the Ministry sign and a billboard with a picture of MNRE Minister Varawut Silpa-archa in front of the Ministry gates.

The caravan then moved to the Victory Monument, where a sign saying "1 year of Bang Kloi and unresolved problems" was attached to the fence around the monument. 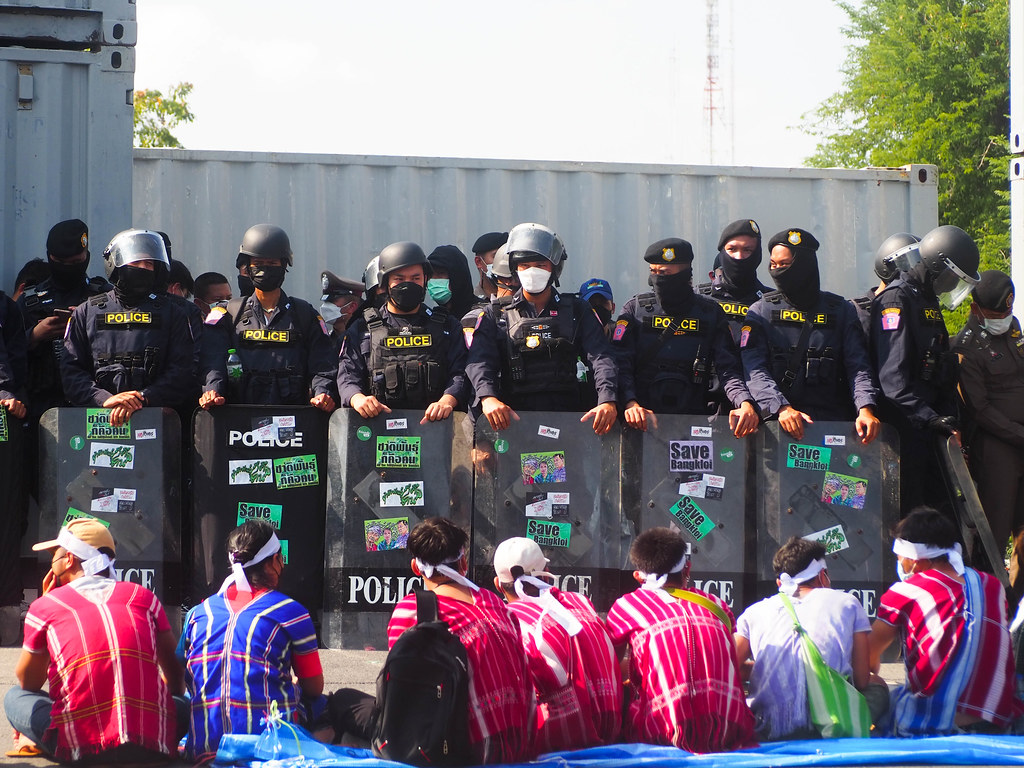 Community members sitting in front of a row of crowd control police while they wait for their representatives to negotiate with government representatives.

At around 13.00 on Tuesday (1 February 2022), the community members, along with activists from the Save Bang Kloi Coalition, marched from the Nang Loeng intersection to the nearby Chamai Maruchet bridge to submit their demands directly to Prime Minister Gen Prayut Chan-o-cha. They were met with a row of crowd control police and a razor wire blockade, while the bridge was blocked with rows of shipping containers.

They returned after several hours, when Thatchapong told the protesters and reporters gathering by the Chamai Maruchet bridge that the government has agreed to remove Varawut from his position as chair of the government committee working on issues facing the Bang Kloi community and replace him with Prime Minister's Office Minister Anucha Nakasai.

Thatchapong said that Varawut’s removal is part of the Save Bang Kloi Coalition’s demands, since his attitude towards the community is discriminatory towards indigenous peoples in Thailand. He also said that they demanded that Anucha meet with the protesters to explain the agreement himself, and that the Prime Minister must sign an official order for the formation of a new committee within a week. 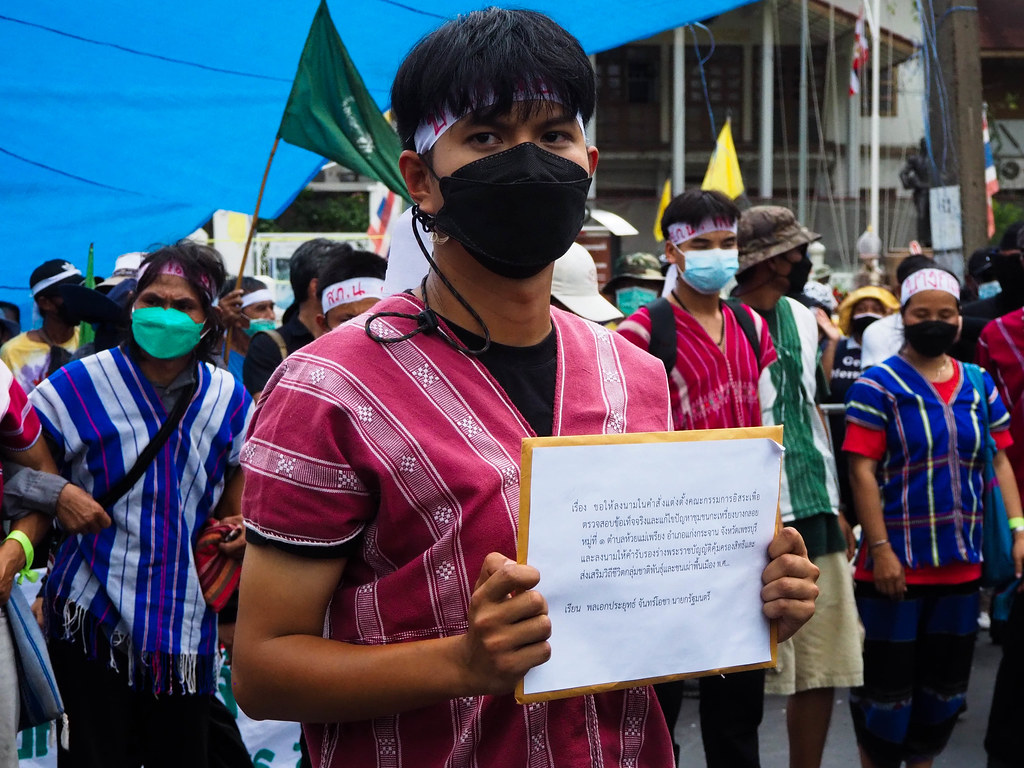 At around 17.00, Anucha came to notify the P-Move protesters of the results of the day’s cabinet meeting. He confirmed that he has been appointed as chair of the committee on issues facing the Bang Kloi community, and that P-Move and Bang Kloi’s demands have been presented to the cabinet. He also said that he will try to hold the first committee meeting as soon as possible.

P-Move leader Chamnong Nuphan said that he appreciated the government’s response, but said that they will stay on Phitsanulok Road at least until Thursday (3 February 2022) to make sure that their demands have been met.