Home » Protests back demand for release of political prisoners

Protests back demand for release of political prisoners

To show support for the demands made by two activists now on a dry hunger strike in prison, activists in several provinces have staged protests to demand the release of all political prisoners and reform of the judicial system. 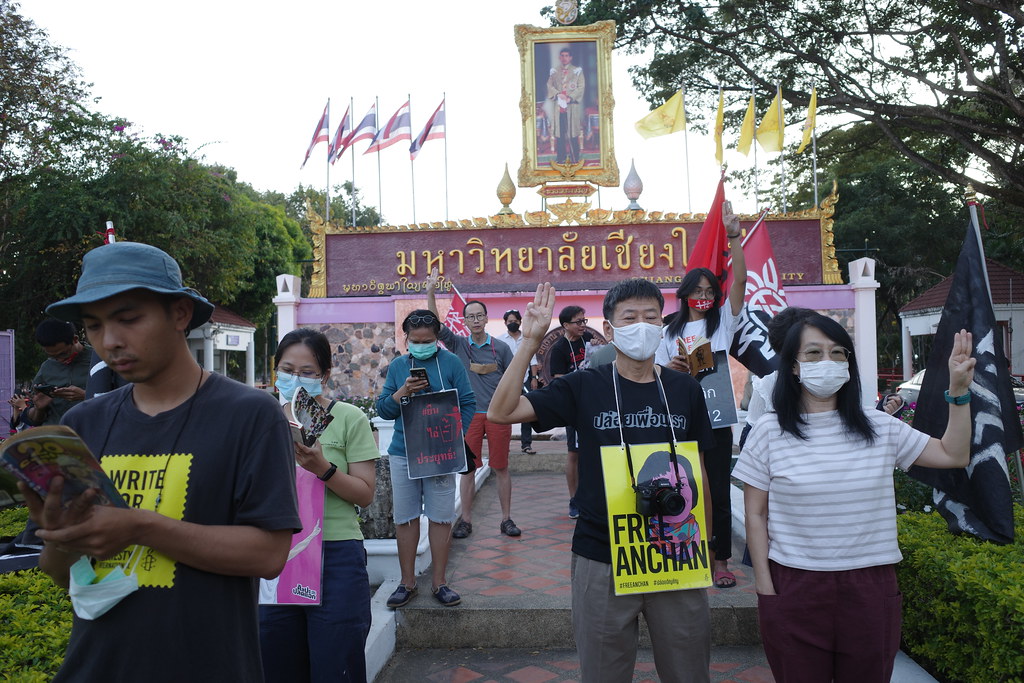 Activists in Chiang Mai standing in front of the entrance to Chiang Mai University last Friday (20 January) during a protest demanding the release of all political prisoners.

Last week, monarchy reform advocates Tantawan Tuatulanon and Orawan Phuphong revoked their own bail to demand the release of political prisoners and reform of the judicial system so that human rights and freedom of expression take priority, and so that courts are independent and protect people’s freedom, as well as for judges to make decisions without intervention from their own executives.

They also called for all charges to be dropped against those exercising their freedoms of expression and assembly, and for every political party to guarantee people’s rights, freedoms, and political participation by backing the repeal of the royal defamation law and sedition law.

After no response was made to their demands within the three-day time limit, Tantawan and Orawan announced on 18 January that they would be dry fasting and will not request bail for themselves until their demands are met. They were taken to the Department of Corrections Hospital last Friday (20 January). Thai Lawyers for Human Rights (TLHR) reported that even though the activists refused all medical treatment and insisted on being taken back to the Women’s Central Correctional Institution, they were admitted to the hospital regardless.

The activists’ lawyer also reported being given conflicting information. After requesting to meet them on Friday morning (20 January), the lawyer was made to wait around an hour and a half before being informed that the two activists had already been taken to the hospital that morning. After correction officers were not able to provide information on the activists’ condition and hospital visits, the lawyer decided to go to the Department of Corrections Hospital, where they were initially told by an officer that the two activists had been taken back to prison. Only when pressed and after they called their supervisor did the officer say that the two activists were being examined by a doctor.

At around 2.00 on Sunday morning (22 January), Tantawan and Orawan’s lawyer was contacted by a corrections officer and asked to come to the hospital to see the activists. TLHR reported that their condition had worsened as they entered their fifth day of fasting. A statement from their lawyer released on Sunday evening (22 January) said that the two activists were fatigued and nauseous, and that Orawan condition had worsened as she reportedly passed out in the bathroom.

Meanwhile, Tantawan is still alert and can still response to a conversation in long sentences. Both activists insisted they would continue to fast until their demands are met, and said that they have rejected medical treatment, intravenous fluids, and tube feeding.

The two activists asked their lawyer to tell the public that they are staying strong. They also noted that they heard the fireworks set off in front of the prison and thanked people for their support.

Fireworks were reported to have been set off in front of the prison complex on Ngamwongwan Road by unknown groups on 18 January after a video announcing the activists’ dry fast was released on Tantawan’s Facebook page, and on Saturday and Sunday nights (21 – 22 January).

TLHR’s statement also noted that the activists’ lawyer is concerned about the hospital staff’s treatment of the activists, their physical and mental safety, and whether they would be treated with human dignity.

TLHR lawyer Kunthika Nutcharus confirmed that, as of 11.00 on Monday (23 January), Tantawan and Orawan have not been force-fed. 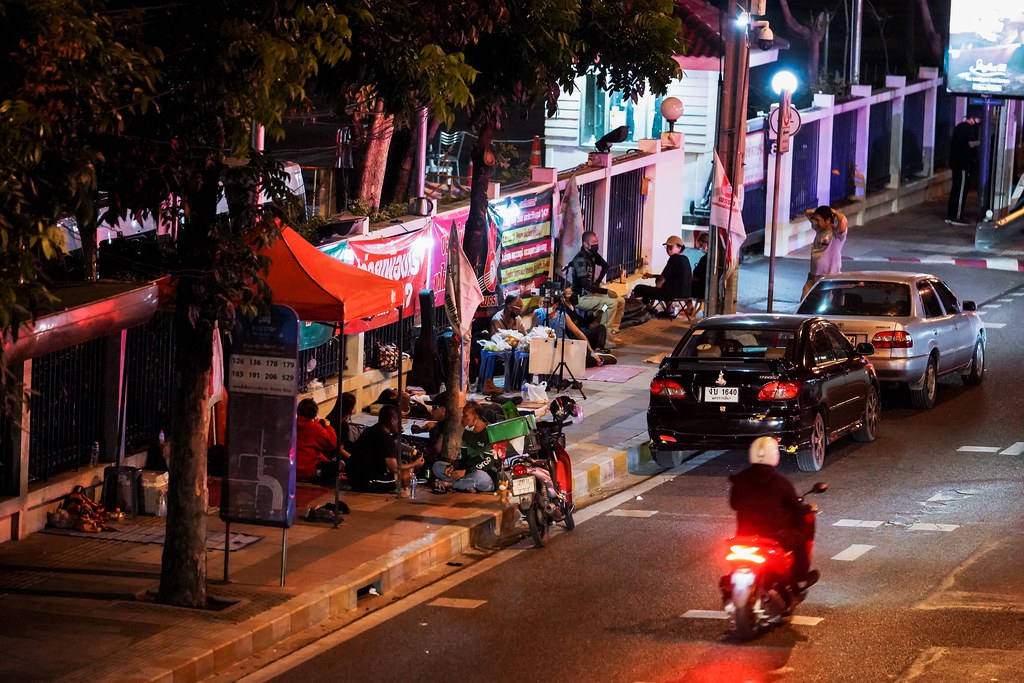 Meanwhile, other activists and protesters have launched protests to show their support for Tantawan and Orawan’s demands. In Bangkok, a crowd has gathered in front of the Ratchadaphisek Criminal Court between 15.00 – 6.00 every day since last Friday (20 January), vowing to return every day for the foreseeable future. 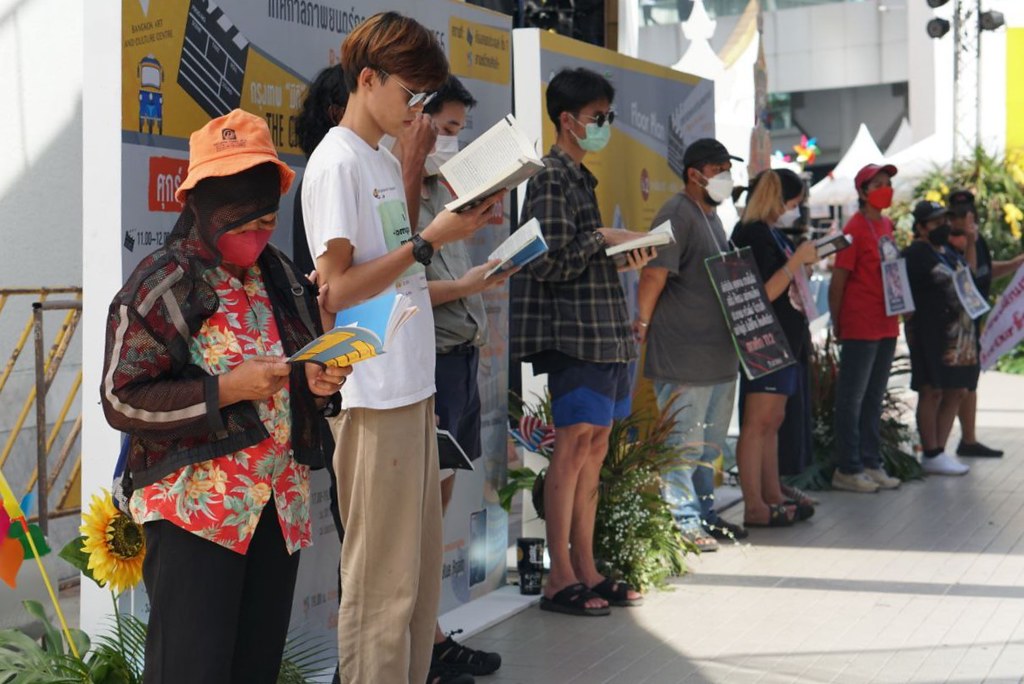 Protesters standing in front of BACC on Sunday afternoon (22 January)

The activist group Thalufah also announced that they are holding their own Stand Against Detention protest and will be standing in the courtyard in front of the Bangkok Art and Culture Centre (BACC) for 112 hours, starting at 1.12 on Sunday (22 January) and until 17.12 on Thursday (26 January), to show support for Tantawan and Orawan’s demands.

Activist Tanapat Kapheng said that the group wanted to bring the demands to the public, because there has not been a lot of public interest, and they wanted people to know that activists are being imprisoned and are fasting. Members of the group will take turns standing in the courtyard throughout the 112 hours, and members of the public are welcome to join them.

Although concerns have been raised about the wellbeing of Tantawan and Orawan, Tanapat said he respects their decision, and that even though the methods are different, he felt he needed to act because they share a common goal. 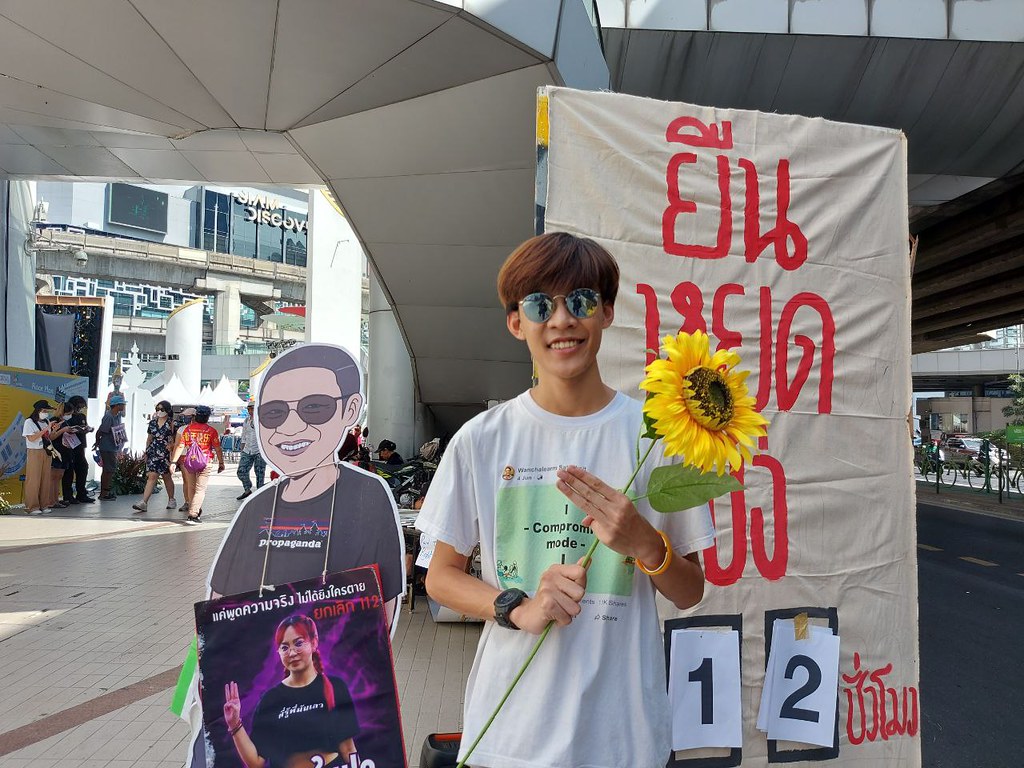 “It is not a good thing that the Thai state and the authorities are locking up the country’s future in a prison and they are dying. You should listen to them. Sometimes, young people can see problems caused by the older generations, and they wanted to take part in developing the country,” he said.

“I want those in power to listen to young people, because obviously you cannot live forever, so when the people speak out, you should listen to their voice, if you believe that this country is really democratic.” 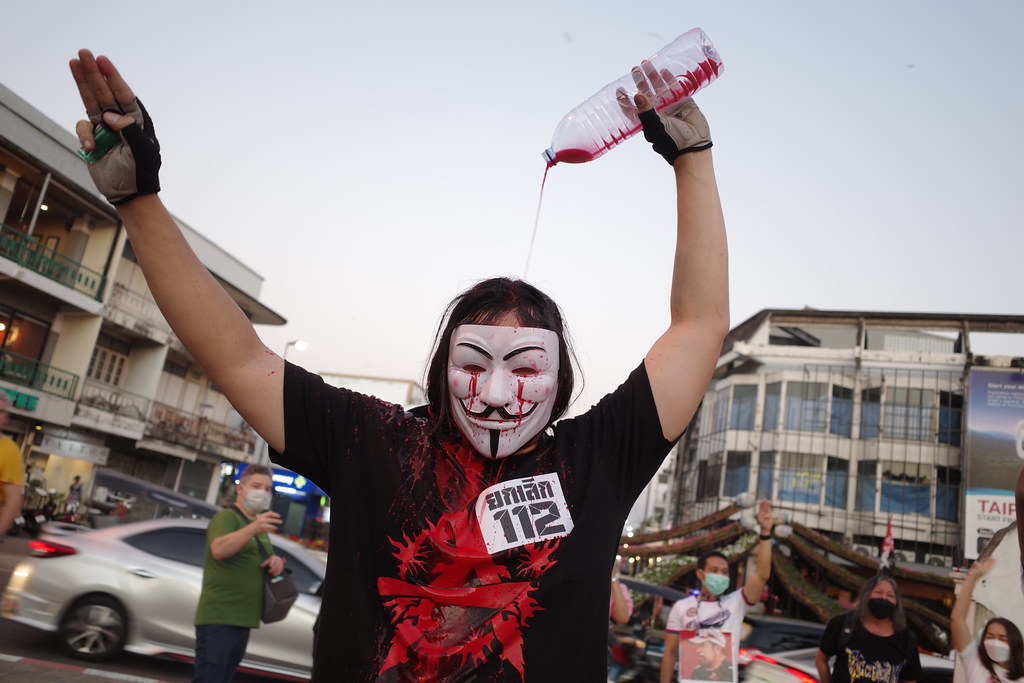 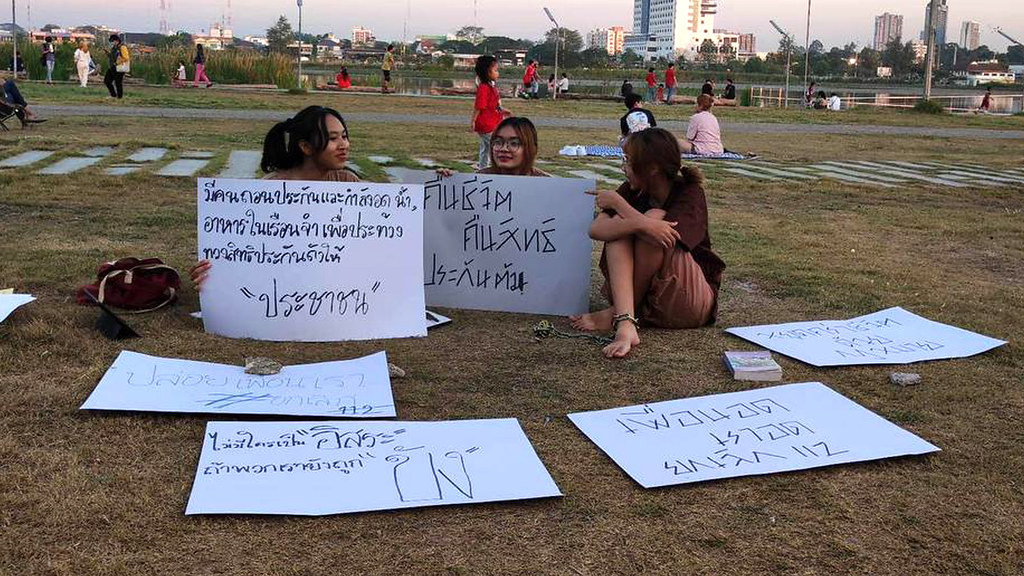 Student activists in Khon Kaen sitting in an on-campus park at Khon Kaen University as they fast for 8 hours in solidarity with Tantawan and Orawan.

In Khon Kaen on Sunday (22 January), local student activists sat in an on-campus park at Khon Kaen University dressed in mock prisoners’ uniforms and wearing chains on their ankles. In solidarity with Tantawan and Orawan, they also fasted for 8 hours, between 15.00 – 23.00, saying that they wanted to bring public attention to the activists’ demands.

The activist group 24 June Democracy has also announced they are staging a protest this Wednesday (25 January) to support the activists’ demand. They called for a caravan starting at the Democracy Monument and said that they will drive to the Ratchadaphisek Criminal Court to demand the release of political prisoners.