A parliamentary hearing into a police crackdown on an anti-government protest in November that left dozens wounded was adjourned without any progress on Wednesday because police commanders failed to show up. 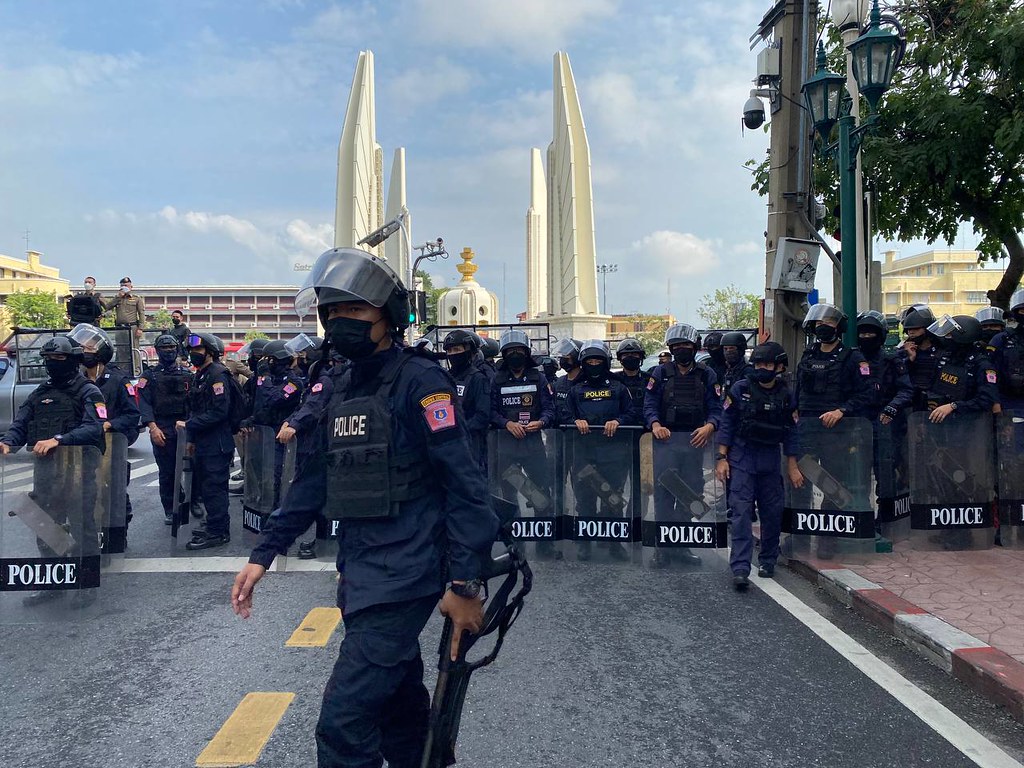 A policeman with a firearm observes a protest taking place close to Democracy Monument in Bangkok on 18 November 2022.

Some lawmakers in the House Committee on Legal Affairs, Justice and Human Rights were left visibly frustrated upon hearing that senior police officials did not respond to their summons, citing scheduling conflict. Despite calls for clarity from various watchdog groups, the police continued to remain silent about the  18 November operation, in which four media workers were also injured.

House committee member Rangsiman Rome said it’s the third time their summons were snubbed by the police commanders, including the chief of the Metropolitan Police Bureau. A correspondent for Prachatai English was also present to observe the session.

“We have been trying to understand and coexist with the authorities. We know that they have a lot of duties,” Rangsiman, an MP for the Move Forward Party, said. “But this is already the third time that this has happened.”

He added that the committee was hoping to give the police officers in charge of the crackdown a chance to explain themselves.

“We want to hear from every side. We respect the facts given by every side,” Rangsiman said.

The house committee launched a probe into police actions on 18 November after protest organisers lodged complaints of excessive violence by the riot police. The activists attempted to march to the venue where leaders of Asia-Pacific Economic Cooperation, or APEC, were gathering, but officers blocked the march and moved in to arrest multiple people, wielding batons and rubber-tipped bullets.

More than 20 demonstrators were wounded in the clashes, activists said; the most serious injury belonged to a man blinded in his right eye by a police baton round. Four media professionals were also injured while covering the protest. They include a reporter beaten by a group of riot police and a photographer who was struck in her face by a glass bottle thrown from the police lines. Police said 14 officers were wounded.

Police officials summoned by the house committee to testify at today’s hearing include chief of the Bangkok police force; commander of the Metropolitan Bureau’s Division 1; commander of the Crowd Control Division; and superintendent of Samranrat Police Station, the precinct overseeing the protest area.

Only the crowd control unit chief, Maj Gen Tanantorn Rattanasittipak, showed up. The rest dispatched other officers on their behalf, as in two previous hearings. They said their bosses could not come to the parliament because they were needed elsewhere; Metropolitan Bureau chief Thiti Sawang, for instance, was having an audience with an unspecified member of the Royal Family, his aide said.

Rangsiman and some other lawmakers argued that the hearing cannot proceed properly without the participation of the commanders in charge, not their junior stand-ins. They also questioned why the police appeared to insist on obfuscating the fact-finding mission.

“It is notable that they declined to come here many times already,” Democrat Party Suthat Ngernmuen commented at the hearing.

Police also maintained radio silence in the face of a complaint from media associations which urged the police on 21 December to investigate the violence against journalists and photographers during the crackdown.

At the time, police spokesperson Archayon Kraithong said that an internal investigation was ongoing and would be concluded “soon.” The police have yet to offer any follow-up to the public since.

Following the complaint, the Commissioner of the Royal Thai Police and other high ranking officials were scheduled to hold a discussion with the Thai Journalists Association and its allied organizations on 12 January.

But hopes of getting any answers are now dashed. That meeting was postponed to 18 January – a day after police officials are due to testify to the Civil Court in connection with a lawsuit filed against the national police force over its use of force against field reporters.

At today’s hearing, house committee member Supachai Jaisamut said that a letter will be sent to PM Prayut Chan-o-cha, who is technically in charge of the police force, informing him of failures by police officials to respond to the summons.

“So we’ll let the Prime Minister know what happened,” said Supachai, an MP for the Bhum Jai Thai Party. “And once we come back after the next election as MPs, we’ll take the matter from there. The House will be dissolved in a few days anyway.”