On the same day that leaders from various Asia-Pacific nations mingled at a shiny convention centre in Bangkok, photographer Chalinee Thirasupa was among a huddle of journalists photographing a phalanx of riot police close to the Democracy Monument. A glass bottle was suddenly hurled toward her face. 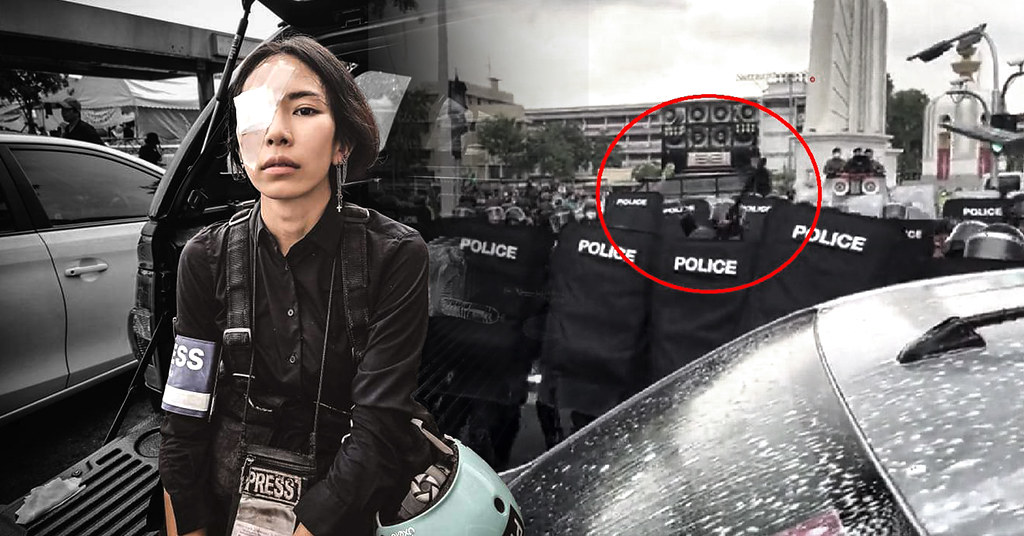 Right: A glass bottle that appears to be thrown from the line of riot police toward a group of reporters during a protest on 18 November 2022. Image: LIVE REAL / Facebook. Left: Photographer Chalinee Thirasupa after she was struck by the bottle. Image: jane_chalinee / Twitter.

“I saw it coming and I tried to dodge it, but it was so fast,” Chalinee recalled the moment in an exclusive interview with Prachatai English.

A video shows the bottle shattering on the hood of a police pickup truck, where the photographers were standing, just inches in front of Chalinee. One of the glass pieces ricocheted straight into her face, drawing gasps of shock from onlookers.

Photographer hit in the face by glass bottle at protest outside APEC summit in Bangkok, Thailand this morning #ม็อบ18พฤศจิกา65 #APEC2022THAILAND #APEC2022 pic.twitter.com/NvvXQ10GTS

A hospital scan would later show that the impact left a 6-mm wound on the sclera of her right eye, and just one millimetre away from the pupil. This one milimetre saved her from a severe eye injury, if not a loss of eyesight. The photographer said she previously had lasik surgery, which doctors said would have greatly complicated the damage had the projectile struck her pupil.

“It was sheer luck,” said Chalinee, who currently works as a stringer for a foreign news agency.

Chalinee was one of a number photographers and journalists who were injured while covering the 18 November demonstration that attempted to march on the venue of the Asia-Pacific Economic Cooperation, or APEC, Leaders' Meeting. Violence broke out when the protesters scuffled with the police, ultimately leading to a crackdown that saw dozens wounded on both sides.

Multiple videos, photos and eyewitness accounts reviewed by Prachatai English show that police actions contributed to the injuries of at least 4 media professionals on that day, including Chalinee. The glass bottle appeared to be hurled, without any warning, from the police lines facing the reporters. Police have yet to make a formal explanation for the incident.

Other cases of police assaulting media workers at the scene including riot police shoving a reporter for The Matter to the ground and beating him; a photographer for Top News struck in the face by another police officer, damaging his eyeglasses; and a reporter for Prachatai wounded in the hand after a policeman shoved a riot shield at him.

Chalinee said perhaps the most surprising thing about her injury was that it came at an unexpected moment of the protest.

Police and protesters did scuffle earlier that day, but there was already a lull in the confrontation when Chalinee walked with other photographers to take photos of the protesters burning chili on a pan – a traditional way of putting a curse on someone – and then putting it on the top of a police vehicle.

“It was before the crackdown,” Chalinee said. “The atmosphere wasn’t tense yet.”

Police were forming a shieldwall just beyond the pickup truck. After an officer noticed that a piece of burning coal had dropped onto the hood of the vehicle, the police brought a fire extinguisher to douse the flame.

This sight prompted protesters to throw bottles and other objects at the police. Photographers jostled with each other in the sudden chaos, and Chalinee’s goggles were lost in the struggle.

“I couldn’t find the goggles, and I thought I’d look for them later,” she said.

The glass bottle flew at her just moments later, as she was training her camera at the police line. Chalinee recalled seeing it coming at her from the direction of the police, an observation collaborated by several eyewitnesses and videos.

The projectile is seen being thrown from the direction of the police at the 11.28 mark.

Another key evidence is a pair of photos taken by Nattaphon Phanphongsanon, another photographer who was standing close to Chalinee. The first photo appears to show the glass bottle being hurled from the riot police position, while the second shows moments before the same bottle landed on the pickup truck. 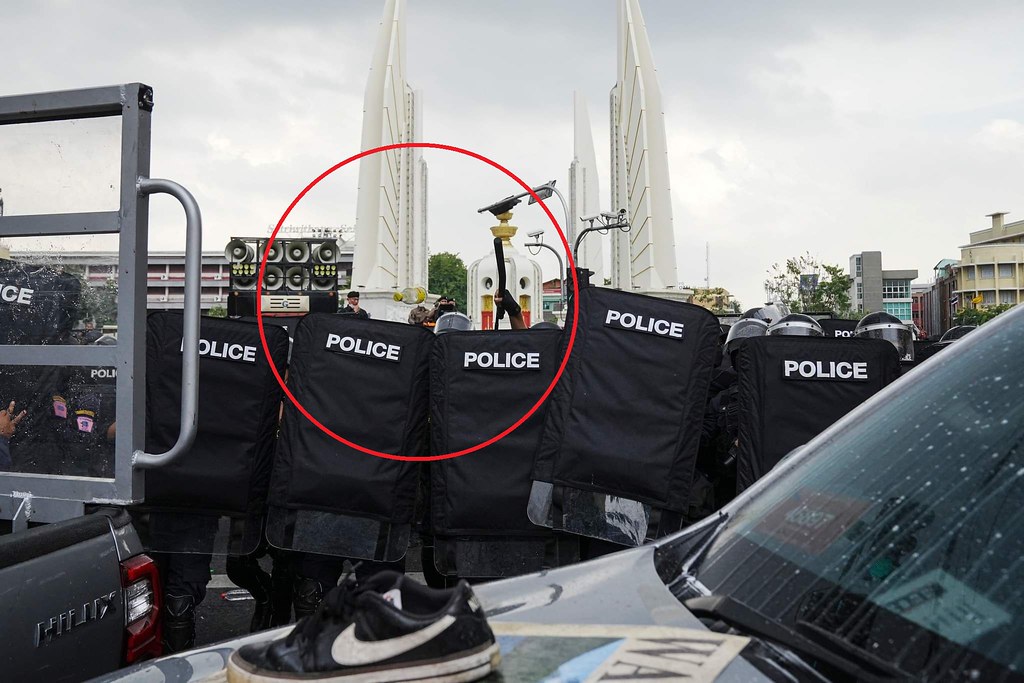 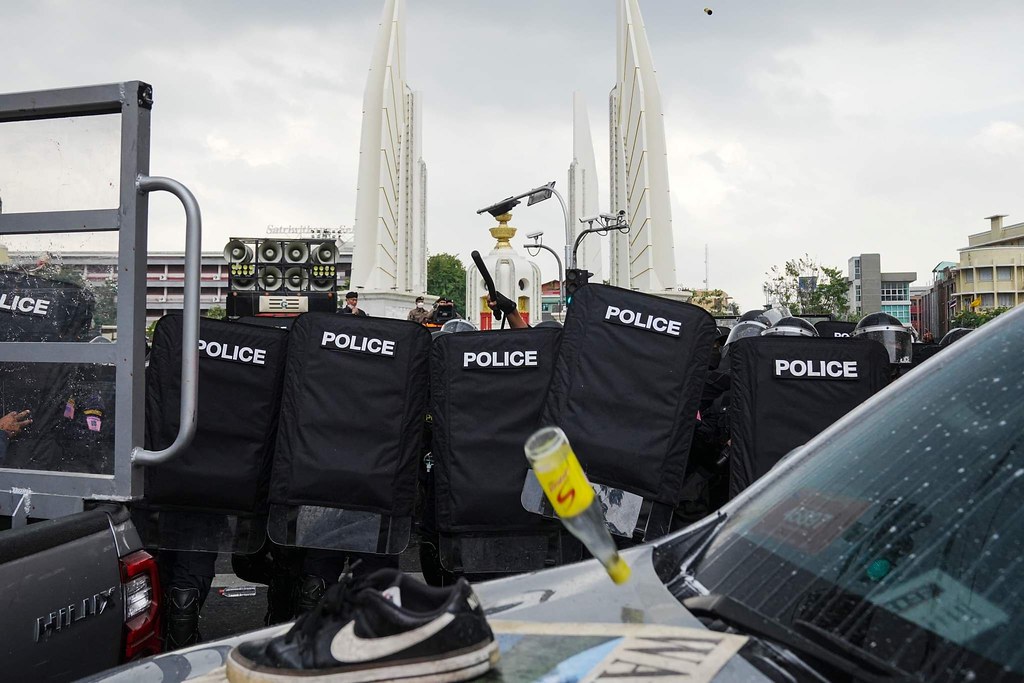 Nattaphon, who shared the photos with Prachatai English, said there was no question the projectile was thrown from the line of riot police.

“It wasn’t the only thing thrown from the police direction either,” Nattaphon said. “There were also wooden sticks, bottles, and other things.”

Minutes after she was struck with the bottle, police moved in and cleared out the protesters. An officer advised her to leave the area immediately to avoid being stranded in the confused skirmishes, so Chalinee left in a car, her right eye bleeding, and headed for medical assistance. Rubber-tipped bullets started flying just as Chalinee tried to make her way out of the area, forcing her to duck in her car at one point to avoid another injury.

Protest organisers said at least 21 demonstrators were wounded in Friday’s clashes, including a man who was reportedly shot in his eye by a baton round. Another 26 people were arrested, including a citizen journalist, organizers said. The police said in a statement that 14 officers were injured.

While sheer luck may have spared Chalinee from the worst plight, she still faces a long road to recovery. She was diagnosed with a haemorrhage in her eye, which has forced her to take several weeks off work. She also experiences throbbing pain.

In the next few weeks, her right eye cannot come into contact with tap water – she’s advised to clean her face by dabbing it with saline solution – and she must put an extra pillow on her head when sleeping to lessen the pressure on the eye. Doctors told her the bleeding will stop on its own in a month, but they can’t guarantee what will follow afterwards.

“Even after I recover, there might be long term complications with my eye,” Chalinee said, citing her doctors. “They may not happen right now, or soon, but it’s too early to tell.”

To monitor the damage to her eye tissue, Chalinee will have a monthly check-up with the doctors over the next two years.

In the interview with Prachatai English, Chalinee also addressed a question that kept being brought up in social media threads that discussed her injury: where was her safety gear?

Chalinee said she’d already taken routine precautions on that day, like any other assignment that involved going to a political rally. When police clashed with the protesters that morning, she had put on a protective helmet and goggles, and kept a distance from the brawl, in accordance with the training provided by her employer. She had also brought a gasmask with her, in case teargas was deployed.

“I brought the safety gear with me, too,” Chalinee said. “When there was a clash, I put it on, and I was standing on the pavement. I was in my goggles and helmet. I didn’t join the fray either because I didn’t want to risk being hurt. I don’t want to have decent photos at the cost of my own safety.”

“From now on, I’ll be even more careful than before. If I see riot police around, I won’t ever take off my safety gear,” Chalinee said with a laugh. “I’ll at least have my goggles on.”

Her friends and colleagues also told her that they saw her injury as a lesson to be more vigilant. One person said they bought safety goggles immediately after hearing the news, after hesitating at the price tag for a year. Another asked her for advice about what equipment they should don in protests.

“It’s a wakeup call that we have to bring this gear with us and put it on at all times,” she said. “It’s like a personal protocol for me now: all hell may break loose the moment we take these gears off.”

Chalinee declined to comment on what legal action she may take against the police for the injury she suffered, but urged media watchdog organizations to communicate with police commanders that the safety and rights of journalists in the field must be respected.

“We don’t go into protests to take a leisure stroll. We’re there to work,” Chalinee said. “We deserve the right to work safely.”

Note: The article and headline were edited for grammar at 14.05 on 24 November.