On Sunday (28 August), a group of activists marched 5 KM from the South Bangkok Criminal Court to the Siam Shopping District to demand that the courts stop requiring them to wear monitoring devices as part of their bail conditions as it disrupts their daily lives. 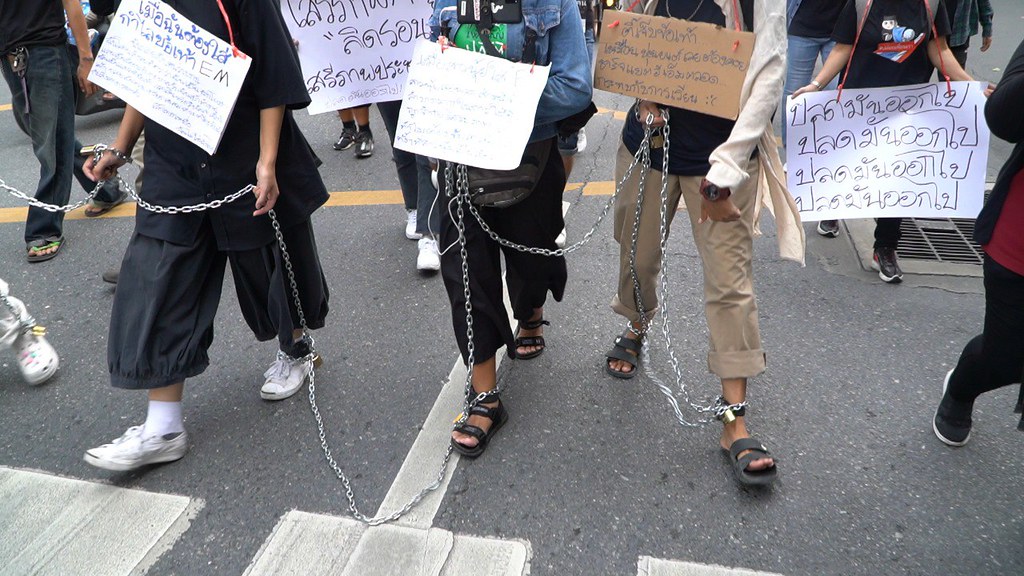 The activists wore chains during the march, which they cut off at the end of the protest.

Led by three activists who are required to wear Electronic Monitoring (EM) bracelets as part of their bail conditions, the “Unlock EM” protest march started at around 14.00 at the South Bangkok Criminal Court and ended at the Siam Shopping district at 18.00, where the activists cut off the chain they wore during the march as a symbolic act of protest.

Bam, 23, was ordered to wear the EM bracelet by the court after being charged for participating in a poll on royal motorcades conducted by the monarchy reform activist group Thaluwang at Siam Paragon in February 2022.

Bam lost her job because of the bracelet. Her employer told her not to come to work until she could take it off. She also said that wearing it makes her feel anxious when she goes out. If her clothes do not cover her ankles and people see the bracelet, they often don’t know that political prisoners are also required to wear them and suspect her of being a criminal. 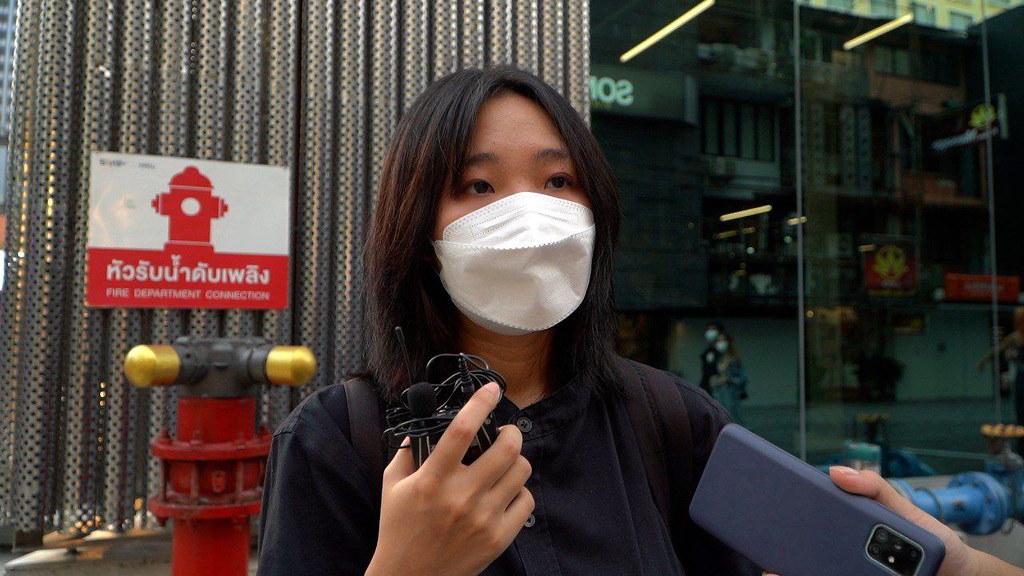 “It was hard at first. It still is a bit. I’m trying to get used to it but actually I’m still not okay with wearing it,” Bam said.

Bam wants the court to stop ordering activists facing prosecution to wear bracelets.  She also asks the public to speak out for the constitutional rights of demonstrators facing charges. She believes that if enough voices are raised, online or in public, changes will happen. 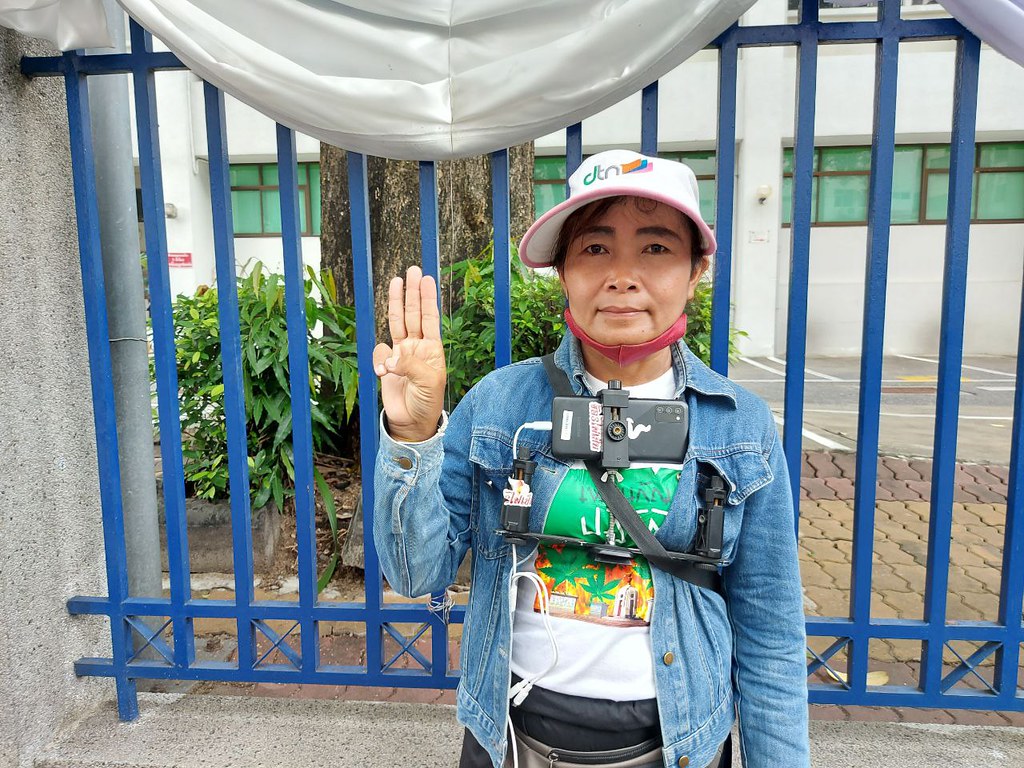 Nui, a citizen journalist who runs the YouTube channel “Sakdina Sua Daeng,” also joined the march. She was charged with royal defamation, sedition, resisting officials and refusing to comply with an officer’s order for live broadcasting the royal motorcade poll, and was also required to wear an EM bracelet as part of her bail condition.

Nui said that her electricity bill has risen because she has to regularly charge the bracelet.  She added that whenever she accidentally slept on top of it, she would receive calls in the middle of the night from officials concerned that she had done something to her bracelet because its signal had gone missing.

Wearing the bracelet has made her feel ashamed because people are always curious about the charges she is facing. She also feels that the authorities are constantly watching her and that she has no freedom because she has to go home whenever they order her to do so.

In her view, requiring activists and protesters to wear monitoring devices as part of their bail conditions is a form of control and a way for the authorities to always know where they are. She notes that other protesters, from ultra royalist groups or the People's Democratic Reform Committee, are not controlled the same way.

“I want to tell the court that judges are not slaves… they should serve the people.  Judges hold the law in their hands and should use their power over people properly,” she said.

During the march, activist Wanwalee Thammasattaya gave a speech in which she explained how wearing monitoring devices disrupted people's daily lives, at work and at school.

She noted that activists often had to choose between being monitored or going to prison, when courts made wearing bracelets a bail condition.  To see their families and and continue fighting for those still detained, many accepted monitoring.

"Today I am wearing an EM [bracelet,] I’ve been symbolically chained … although we are forced to wear EMs, although we are in chains, it will not stop us from fighting for this country," she said. 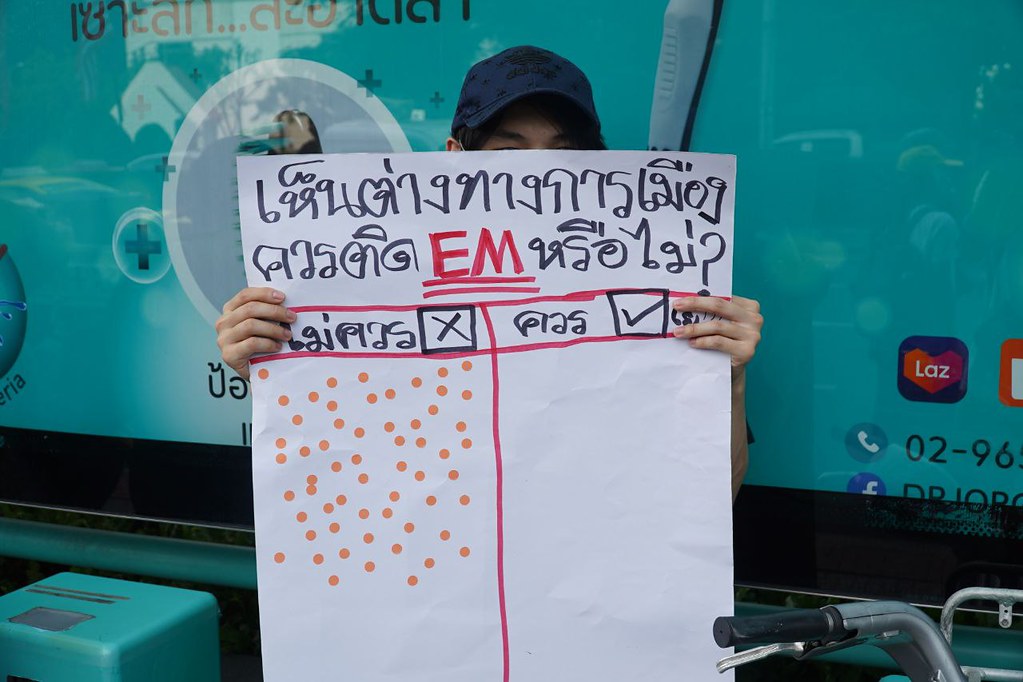 Participants conducted a poll on whether political activists facing charges should be required to wear a monitoring device.

Participants in the march also conducted a public opinion poll on the question of whether political activists facing charges should be required to wear a monitoring device. Taek, one of the poll organisers, said that bracelets were generally used in cases where the Court of First Instance had already found someone guilty and they were awaiting appeal.  As many of the activists required to wear bracelets had yet to be tried, and there was no reason to believe that they would tamper with evidence or flee, they should have been granted bail without being monitored.

“In these cases, political cases, they put EMs on people to control them and to see where each activist goes,” Taek said.

Taek called on the authorities to follow the Criminal Procedure Code, which states clearly that, if a person is not a flight risk or likely to tamper with evidence, they should be granted bail without conditions needing to wear monitoring devices.

Taek added that as many of those facing charges for political activities are students, wearing bracelets disrupted their lives.

“When students have to wear bracelets on their ankles around the clock, until a court order or verdict lets them remove it, how will it make them feel when they go out with friends, go to concerts or the movies?" Taek asked. 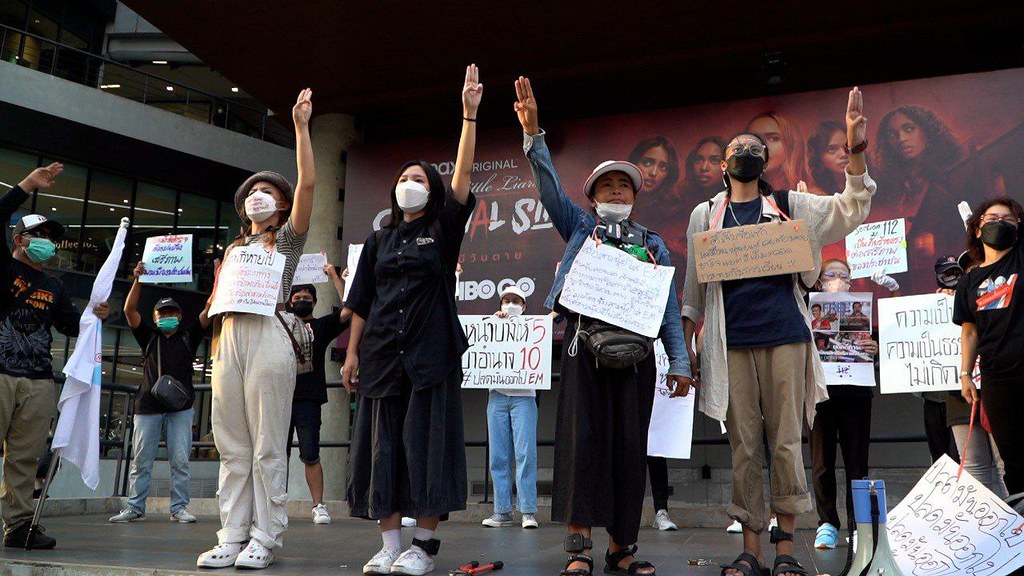 The march arrived at the Siam Square shopping district.

According to Thai Lawyers for Human Rights (TLHR), the Ministry of Justice began ordering the use of EM bracelets in March 2018, particularly in drug-related and other criminal cases where the accused were unable to put up large amounts of cash for bail. In a 2020 interview Justice Minister Somsak Thepsuthin also said that the Ministry aimed to use EM bracelets to reduce prison overcrowding, monitor the activities of individuals on probation or parole, and keep track of people waiting test results in drug-related cases.

According to TLHR, the use of monitoring devices on people charged for participating in pro-democracy demonstrations began in 2021 as a part of bail conditions, even for individuals able to pay security bonds.  Between March 2021 – March 2022, at least 54 protesters and activists were required to wear EM bracelets.  22 were facing royal defamation charges.

As of April 2022, 38 people are still wearing the bracelet. 23 people were allowed to take off the devices after making requests to the court.