The 89th anniversary of the democratic revolution that toppled the absolute monarchy of Siam resonated with demands for political and monarchy reform as the commemoration coincided with a parliamentary debate over motions to amend the constitution. 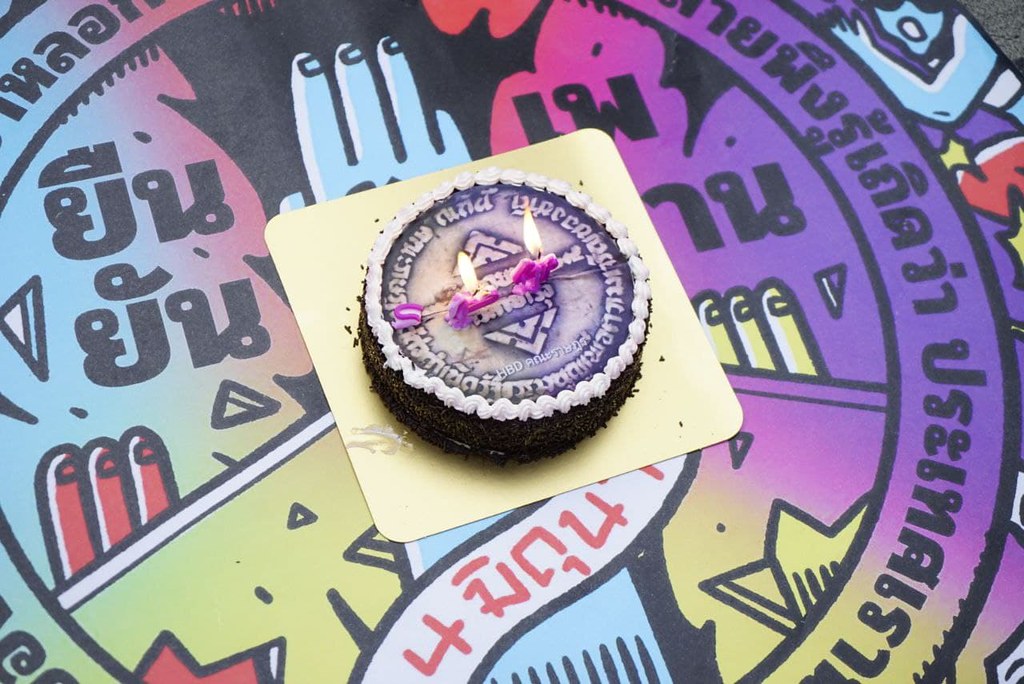 Commemorations were held in many sites including Chiang Mai, Ubon Ratchathani, Khon Kaen, Pattani, and Pattaya, to celebrate the revolution and to underline the demands for political and monarchy reform that were made during last year's protests.

In Bangkok, the date was marked by protests by at least 5 groups in 4 locations: the Democracy Monument, Government House, Parliament and the Pathum Wan intersection.

Plea for reform in the present, glorification of the past

The demands of each protest varied. Ratsadorn, a coalition of pro-democracy activists, reiterated its demands for political and monarchy reform and constitutional amendment even in the face of the massive surge in legal prosecutions in July 2020.

The protest started at 05.30 at the Democracy Monument, copying the time when the revolution began in 1932. Activities included burning history textbooks, tying banners around the Monument and setting up a gigantic People’s Party Plaque and met no significant resistance from police in the area. But protestors were warned that public gatherings are not allowed during the state of emergency to control Covid-19. 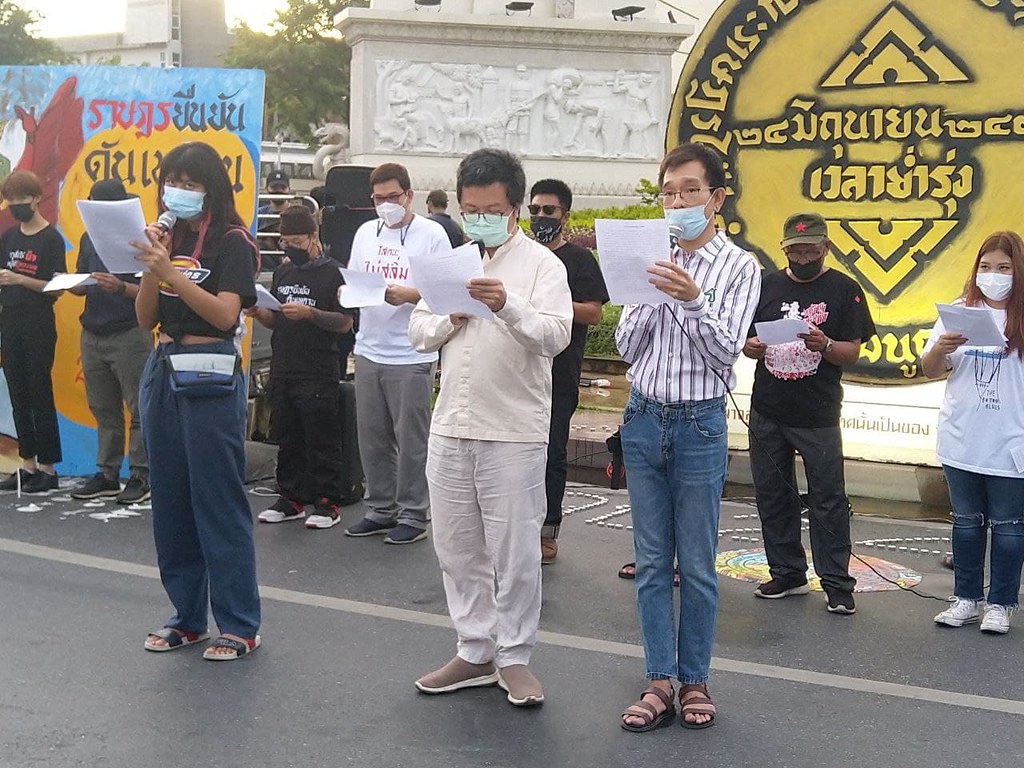 The demonstrators reading the People's Party Declaration together.

The event at dawn ended with a collective reading of the People’s Party Declaration, which publicly announced the change of regime. The Declaration states the monarch's incompetence had inflicted corruption, cronyism and exploitation upon the real owners of the country, the people. Therefore, a revolution and a new regime was needed. The organizers announced a march to Parliament at 10.00. 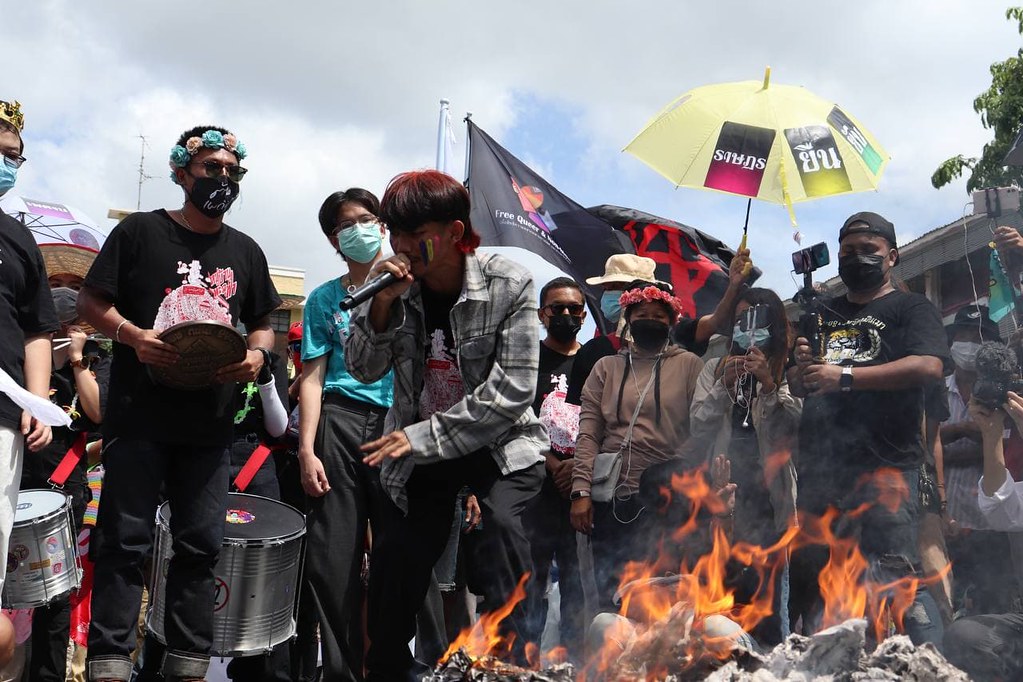 The march began at 10.38 with about 500 people taking an 8 km roundabout route to Parliament, instead of the direct 3.2 km route via Ratchadamnoen Klang Avenue, in order to circumvent blockades of police and containers protecting routes to the palace and other royal sites. The organizers said that the route had been agreed with the police. 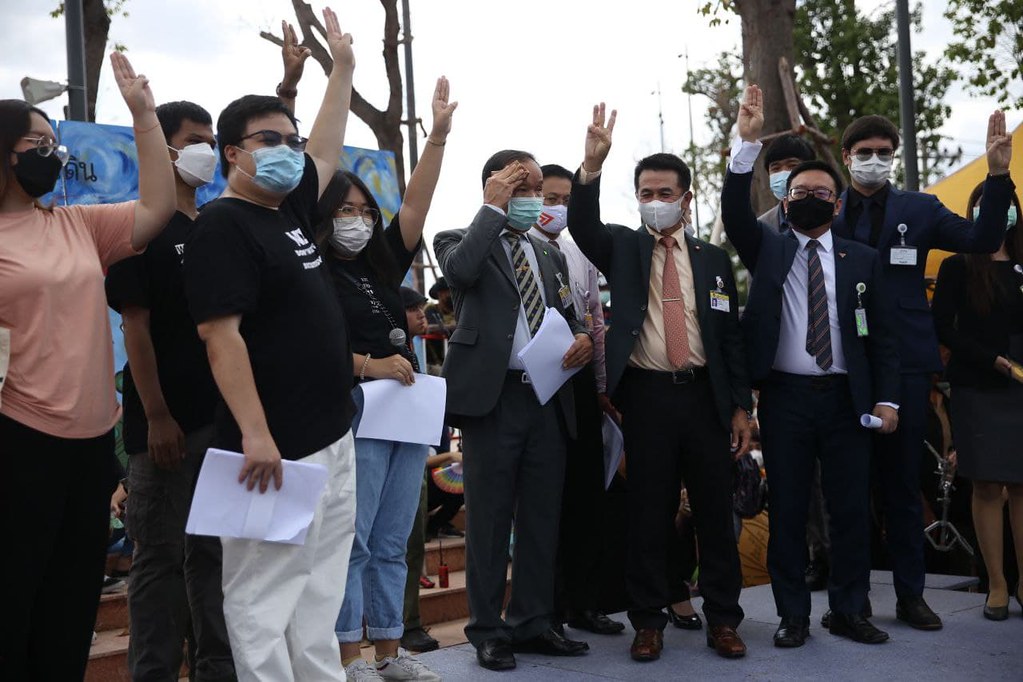 The protester representatives and MPs from the opposition parties flashing a 3 finger salute after they finished submitting the letter.

The demands were handed over to MPs from the government and opposition parties along with the new People’s Party Plaque and the first constitution of Siam as symbolic actions.

Dr Cholnan Srikaew, Pheu Thai Party MP, said after receiving the letter as a representative the opposition whips, that the people’s attempt to amend the constitution can be debated by Parliament by having 50,000 people sign in support. The referendum needed for a wholesale constitutional amendment will have to wait until the Referendum Law that had just been approved by the lawmakers on 22 June officially comes into force.

At Pathum Wan intersection at around 17.00, people started to gather in front of the Bangkok Art and Culture Centre (BACC) and the Skywalk above to attend the evening commemoration event, a continuation of the protest at Parliament. 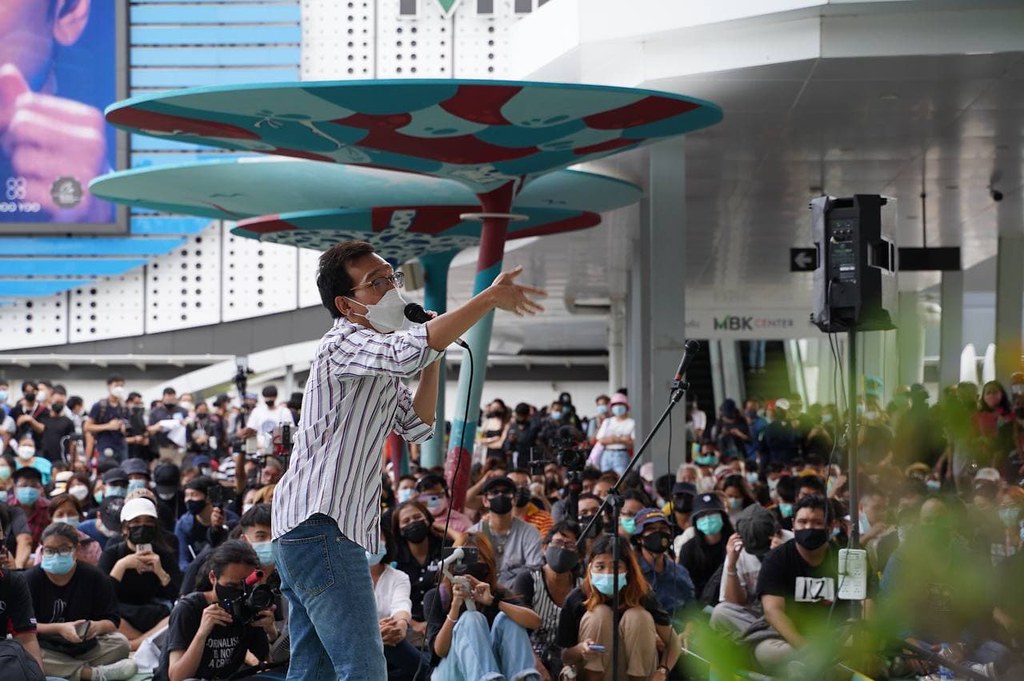 Promsorn “Fah” Veerathamjaree, one of a famous protesters giving a speech at the Pathum Wan Skywalk.

A petition for constitutional amendment from the Re-Solution group, a civil society group calling for a new constitution that will abolish the legacy of the NCPO junta, was open for signatures.  At the end of the day, it had received 70,000 signatures, 20,000 more than the number needed for submitting the draft to Parliament.

“This draft will reform the legislative system, the Constitutional Court and the independent organizations so that they are related to the people, giving the supreme power to the people and their representatives only,” said Tisana Choonhavan, a key Re-solution figure.

Tisana said the draft amendment aims to abolish the Senate as its existence hinders the law-making process. It also aims to give people more power to scrutinize the independent organizations, courts and judges.

Explainer: What has been brought up in the 2nd constitutional amendment?

Summer (alias) came to the #ม็อบ24มิถุนา protest at the BACC with a poster reading “If politics was OK, what would life be?”

Summer said she wanted the people to recall their dreams beside having true democracy. But she also urged people to pay attention to the constitutional amendments as they are an attempt to move society on from dictatorship.

Student activist groups Khana Chula and Seri Toey+ were seen at the protest at Pathum Wan intersection selling cookies in rainbow colours and in the shape of the People Party’s Plaque to promote gender diversity and the 1932 revolution.

A representative of the groups said the government has ignored the damage they have done by their illegitimate actions. Constitutional amendments are the only way to get out of this long-standing abnormality in the political mechanism. 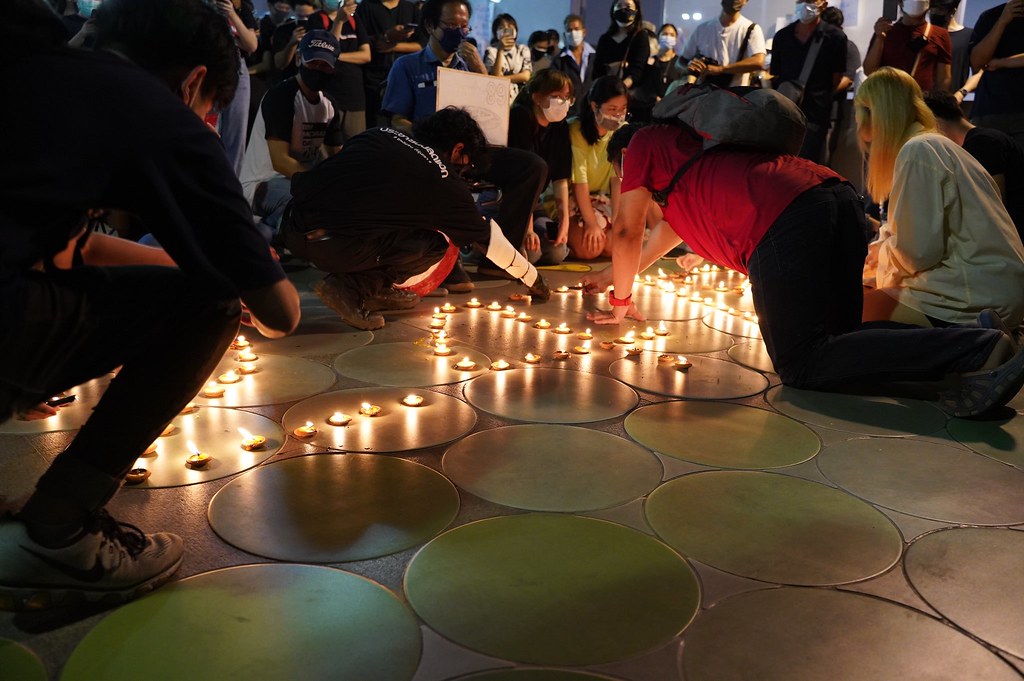 To commemorate the 1932 Siamese revolution, candles were lit and arranged into the number 2475 on the Pathum Wan Skywalk. Meanwhile, several activists gave speeches, and one of the main topics was the constitutional amendment.

Panusaya Sithijirawattanakul was the last activist to speak at the rally. She honoured and expressed gratitude to the People’s Party for creating the first constitution that paved the way for Thailand’s development, and said that their efforts are still not yet finished, and the people have been fighting for a long time.

She stated three demands: the resignation of Prayut Chan-o-cha and his clique; every section of the constitution must be open for amendment; and reform of the monarchy.

Normally, it is the monarchy reform protests that face harsh resistance from the authorities. This time, it was the protests organized by 2 separate groups, Prachachon Khon Thai (Thai people) led by Nititorn Lamlua, and the United People for Thailand led by Jatuporn Prompan, that came in for a harsh reaction from the police, despite both having only one demand, the resignation of the PM, Gen Prayut Chan-o-cha.

Planning to set up an overnight protest site around Government House, the groups approached the perimeter separately. The Nititorn group confronted riot control police on Phitsanulok Road as they tried to negotiate a way past the police blockade.

The police were equipped with rubber bullets, tear gas launchers, body armour and shields. Water cannon trucks were also deployed. As Nititorn approached the police, he said that he would ram the line if they did not retreat, causing the police line to back off a little.

The tension subsided at around 18.00. Protesters from both groups were practically mingling. Because of their small numbers, both groups decided to disperse and return on Saturday, 26 June.