Home » Calls for legal protection in wake of activist’s disappearance

Calls for legal protection in wake of activist’s disappearance

Human rights activists, legal experts and politicians are demanding laws to protect citizens from enforced disappearance while calling on the Thai and Cambodian governments to show responsibility for the disappearance of Thai dissident Wanchalearm Satsaksit. 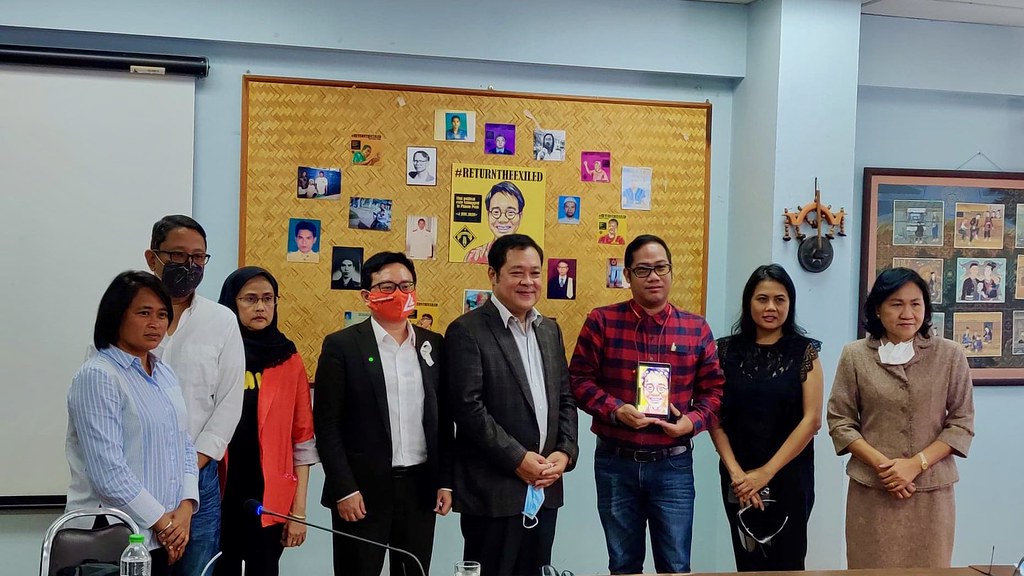 Wanchalearm is a Thai political activist who was reported kidnapped from his residence in Phnom Penh, Cambodia on 4 June. As of 12 June, neither the Thai nor Cambodian governments had conducted an investigation.

On 11 June, 25 organizations held a joint forum on the risks of enforced disappearance and possible protections. The panel included Wanchalearm’s friends and representatives from human rights and legal organizations, the Justice Ministry and two political parties.

Chayootm Sirinantapaiboon, who has known Wanchalearm since 2002, said nobody should be “abducted and murdered” solely for criticizing or expressing dissenting political opinions, not even criminals.

Chayootm said he has been told since he was young that he needs to beware of his safety when expressing his thoughts on political matters.

“We’re in a land that is obscure. Mouths that accidentally speak, hands that happen to post, or even only thoughts that flash out, we are warned,” Piyanut said. “It makes us worried about whether or not we are breaking a law, even though in fact laws shouldn’t have been designed to block the freedom of expression of the people.”

Wanchalearm is not the only activist who has mysteriously disappeared. Advisor to Human Rights Watch Sunai Phasuk said there have been eight activists who disappeared from the neighbouring countries of Laos and Cambodia. Two of the eight were found dead.

Thailand started drafting legislation that would prevent torture and enforced disappearance when the government raitified the Convention against Torture and Other Cruel, Inhuman or Degrading Treatment or Punishment (CAT) in 2007. But it has not yet been enacted. Nongporn Roongpetchwong of the Rights and Liberties Protection Department, Ministry of Justice, said the

draft Prevention and Suppression of Torture and Enforced Disappearance Act has been delayed since it conflicts with a section in the 2017 constitution.

Director of Amnesty Thailand Piyanut Kotsan said the government must pass the act so the people can have legal assurance that they can express their opinions freely while being able to seek justice when they are faced with injustice from the authorities.

Pol Col Tawee Sodsong, Secretary-General of the Prachachart Party, said the problem with Thai laws is that they were not designed to serve the people, but rather to control the people.

Chaitawat Tulathon, Secretary-General of the Move Forward Party, agreed and pointed out that what happened shows that the government sees its people as its enemy and as a threat to national security. Chaitawat believes the draft act would be difficult to pass under Gen Prayut’s administration but he said his party will keep pushing this legislation.

To make the draft act effective and actually serve justice for the disappeared, their family members must be a part of drafting it, suggested Angkhana Neelaphaijit, former National Human Rights Commissioner, as she believes there is no one who has a better understanding of the loss than them. After Somchai Neelaphaijit, her husband, was abducted, she hoped he would be the last person to face the situation but it keeps happening. Angkhana said there must be an assurance from the government to guarantee that no one will face this injustice.

Pressure on the Thai and Cambodian governments

It has been more than a week since Wanchalearm disappeared but neither government has acted on it. Chayootm said Wachalearm is not the administrator of the anti-government Facebook page, กูต้องได้ร้อยล้านจากทักษิณแน่ๆ (I must get 100 million baht from Thaksin for sure), as he has been accused, but he did not get a chance to defend himself.

Chayootm called for justice for Wanchalearm, saying the Cambodian government must investigate the case as a crime has been committed on Cambodian soil, and must institute legal proceedings once they find the suspect.

Sunai called on Thai government to stop devaluing and dehumanizing Wanchalearm, as Gen Prayut said they do not know who Wanchalearm is and Foreign Minister Don Pramudwinai said he was not registered as a political refugee in the UNHCR system. Sunai pointed out that the Thai government has the constitutional duty to protect its citizens regardless of personal relationships or their legal status. Sunai suggested that Thai government publish its communications with the Cambodian government for reasons of transparency and completeness of the documentation.