Submitted on Wed, 3 Sep 2014 - 04:01 PM
Kongpob Areerat
About 4,000 illegal migrant children are arbitrarily arrested in Thailand and detained separately from their parents in inhumane conditions without adequate food, healthcare, or space, according to the latest report by Human Rights Watch (HRW).
Moreover, migrant children aged nine to 12 are kept in the same cells in detention centres as adult prisoners on various charges.  This makes them directly and indirectly vulnerable to violence committed by the adult prisoners. Some of the children are beaten up by adult prisoners, according to Alice Framer, a HRW expert, who presented the report “Two Years with No Moon” on Tuesday 2 September 2014 at the Foreign Correspondents Club of Thailand (FCCT), Bangkok.
In Thailand, approximately 4,000 migrant children are detained each year. Of this number about 3,900 come from Thailand’s neighbouring countries and are usually deported back to their countries of their origin after one or two weeks of detention. However, another 100 migrant children from Syria, Afghanistan, and Pakistan, if arrested, will not be deported by the Immigration Bureau of Thailand due to unknown reasons, according to HRW 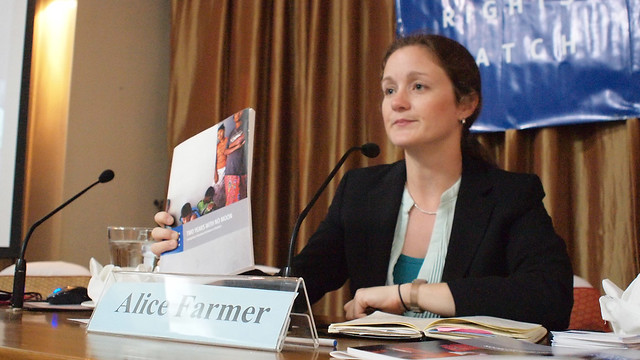 Alice Farmer, expert from the Human Rights Watch, displays the pubication  “Two Years with No Moon”
The findings are from interviews conducted between June and October 2013, with 41 migrant children and 64 adults who had been detained, arrested, and affected by the interface between the police and immigration officials.
The expert said that arbitrary arrests and the indefinite detention of migrant children in appalling facilities are prevalent in Thailand. “Migrant children detainees in Thailand are suffering needlessly in filthy, overcrowded cells without adequate nutrition, education, or exercise space.” said Farmer.
Lack of space is a major problem in the cells. Major immigration detention centres (IDC) throughout the country, especially in important destinations such as Bangkok, the northern provinces of Chiang Mai and Tak, and the southern province of Ranong, are overloaded with migrants. According to the World Health Organization, the Bangkok IDC provides only three square metres of space per detainee.
“When I got in, there were 83 people listed as occupants of the room. That was really tight. There is almost no way to walk around. If I rolled to the right, I’d lie on someone. If I rolled to the left, I’d land on someone else. I get elbowed all the time. I had to hang my bag by string or use it as a pillow. There was no room anywhere else” Leander, whose last name is withheld, was quoted by the HRW.
“300-400 people had to stay in a room built for 40-50 people” a girl whose name withheld was quoted by the Mekong Migration Network.
There are approximately 375,000 migrant children in Thailand. Most of them are from Thailand’s neighbours, Myanmar, Laos, and Cambodia. Migrants from neighbouring countries are usually released after one or two weeks of detention and deported to their original countries.
However, Thailand has also been a destination for migrants from Syria, Afghanistan, and Pakistan who have fled violence and sectarian conflicts in their countries. The fate of these migrants is worse. They are normally detained for indefinite periods of time, which could last up to five years, until they and their families are officially accepted for resettlement in third countries. Being detained separately from their families for a long period, they usually suffer from stress and anxiety.
Before the coup in May, migrant children from distant countries could be bailed out at a cost of 50,000 baht per child. However, since the coup, the junta has tightened up Thailand’s immigration policies. Now, for the children to be released, the parents of detained migrant children need to be accepted for resettlement by third countries in addition to the bailout money.
“Now, it is nearly impossible to get migrant children under detention released on bail alone. The junta has rendered this method useless, and migrant children are detained for much longer,” said a representative from the Jesuit Refugee Service.
Farmer mentioned that putting migrants in prison cells is a costly way of handling the immigration influx. Therefore, the fact that the Thai officers choose detention signals a lack of vision in the Immigration Bureau.
She recommended that Thailand follow the example of the Philippines, where migrants are arrested, documented and let go. This allows migrants to be united with their families, while officers can easily keep track of them at the same time.
Thailand has not ratified the Refugee Convention of the United Nations High Commission for Refugees, which obliges states party to accept refugees, but did ratify the UN Convention on the Rights of the Child in 1992. This convention states that no migrant child can be detained by the state.  The reality, however, is the opposite.
Featured photo by Phuketwan
News
children
children rights
Human Rights Watch
immigrants
migrant workers
Migrants