An ultra-royalist group has filed a royal defamation complaint against Move Forward party MP Amarat Chokepamitkul, after she posted a video clip on Twitter of herself speaking about court neutrality issues in royal defamation cases. 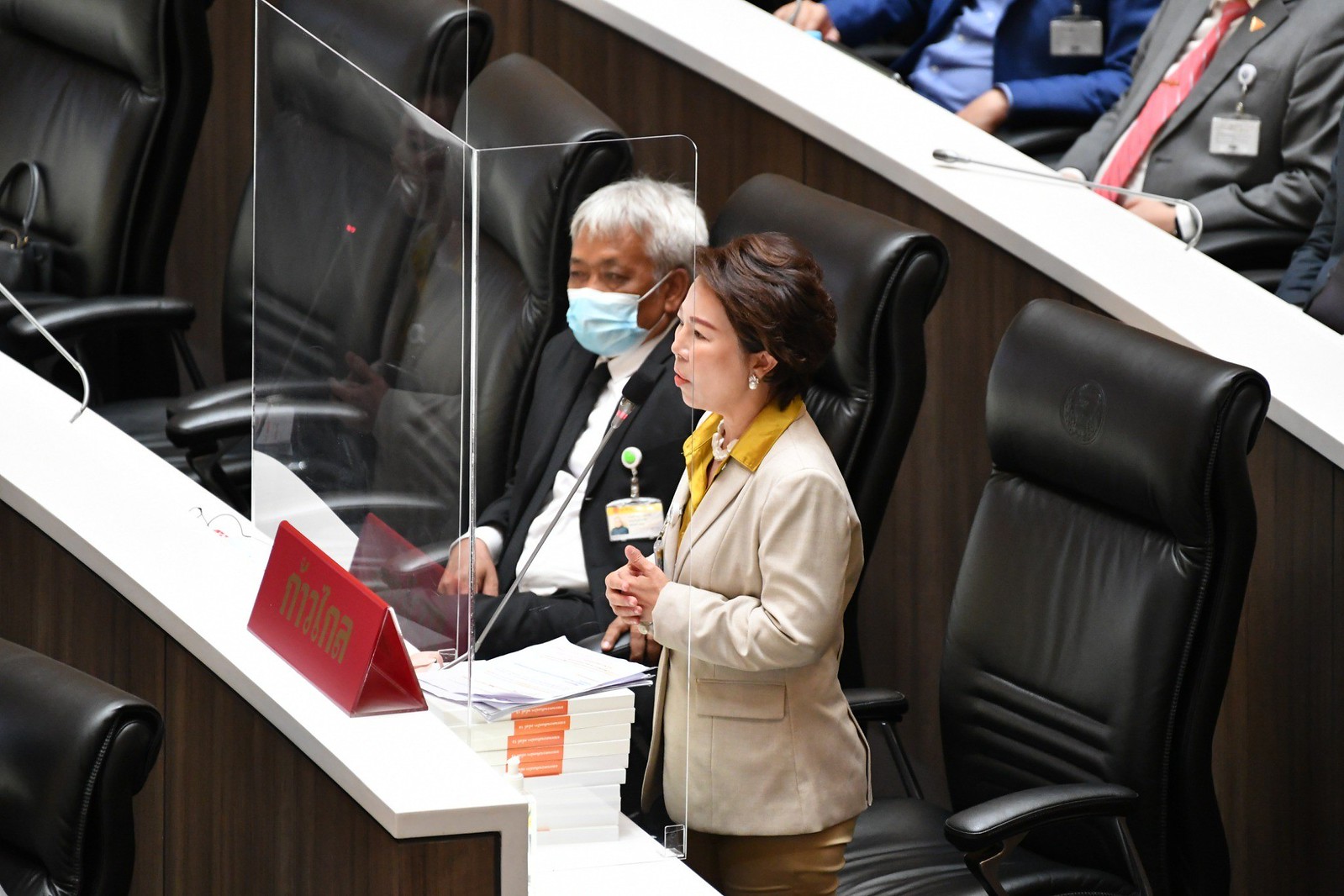 The ultra-royalist King Protection Group posted on its Facebook page on Thursday (3 November) that its President Songchai Niamhom went to Phatthalung Provincial Police Station to file a royal defamation and sedition complaint against Amarat, claiming that she defamed the monarchy in a Twitter video of herself speaking during Wednesday’s parliamentary session.

On Wednesday (2 November), Amarat posted on her Twitter account a link to a video on Matichon TV, along with a short video clip and a caption apologizing for not being able to finish her speech. The video clip was from Amarat’s speech during the day’s parliamentary session, in which she discussed the court’s neutrality when dealing with royal defamation cases and how courts refused to summon documents to be used as evidence in these cases, such as records of King Vajiralongkorn’s travel to and from Germany and records of the transfer of shares in Siam Commercial Bank. She was stopped by House Speaker Chuan Leekpai, who told her to keep her discussion to what benefits the public and not to talk about the monarchy. He eventually cut off her microphone.

Songchai said that he was shocked by the speech, and that he later saw the video clip on Twitter and found it shocking that Amarat posted the video clip even though the House Speaker forbade her from discussing the monarchy. He believes that the content of her speech is defaming towards the King and decided to file a complaint.

The police accepted Songchai’s complaint and said that they will investigate the matter and submit the case to their superiors.

Songchai and his group previously filed a royal defamation complaint at Cha-uat Police Station in Nakhon Si Thammarat Province against rapper Kitti Ruangphunglhuang, known under the stage name P9D, for a song Songchai claimed was hostile towards the King.

In July 2022, Sonthiya Sawasdee, a royalist activist and former adviser to the House committee on human rights, also filed a complaint with the National Anti-Corruption Commission calling for the Move Forward Party to be investigated for “serious ethical breach" after MP Bencha Saengchantra spoke about detained pro-democracy activists during a no-confidence motion against Prime Minister Gen Prayut Chan-o-cha. Move Forward Party MPs also raised photos of activists Netiporn “Bung” Sanesangkhom and Nutthanit “Baipor” Duangmusit, who were held in pre-trial detention at the time and were on a hunger strike to protest the court's decision to deny them bail. He also took offence at Amarat for placing a funeral flower in front of the House Speaker’s seat to protest the Prime Minister’s refusal to step down, eight years after he seized power in a military coup.

Under the 2017 Constitution, no charges can be filed against a Senator or MP for anything spoken during a parliamentary session. However, an MP or Senator will not be protected if what they say during a session is broadcast or published outside of parliament and it damages someone who is not a Minister, a Senator, or an MP. In the case of defamatory speech, the House Speaker must also publish an explanation as required by the damaged party within a time specified by parliamentary or senate regulations. The damaged party, however, can still press charges against the MP or Senator.