Indigenous Karen communities from Samoeng District, Chiang Mai, filed a petition on Tuesday (11 October) to oppose the designation of forest land as part of Ob Khan National Park, as the land includes their community forest and spiritual area. 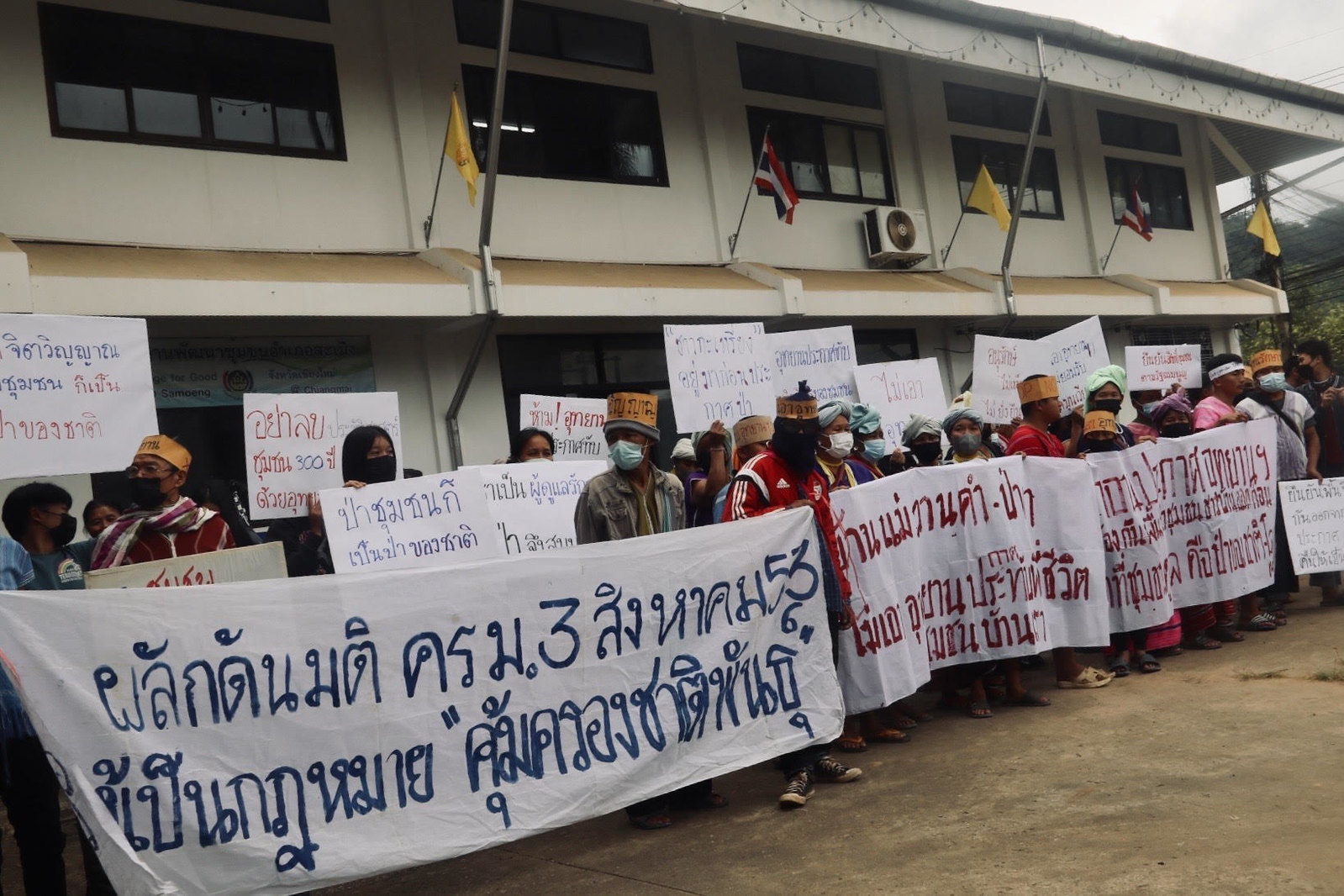 The communities are concerned that 39.22 square kilometres of land that could be designated a national park include their community forest, from which they have been making a living in accordance with their traditions as indigenous communities, and if this land is designated part of a National Park, it would be a violation of their rights and of the 3 August 2010 Cabinet Resolution on the recovery of the Karen people’s way of life.

Community members said that they have conducted a survey together with park officials and found at least 368 locations which the communities have been using for foraging, raising livestock, and performing ceremonies according to their spiritual beliefs. They are therefore demanding that these lands be taken out of the area set aside for the national park and that they be given the right to manage the land and resources as a community.

Tayae Yodchatmingboon, 75, a leader of the Mae Lan Kham Karen community, hopes that the relevant authorities will support them and remove their lands from inclusion in the national park. He asked that the government help the communities, as their rights are being violated. He is also concerned that park officials do not respect the communities’ culture and that community members will continue to be harassed even though they have conducted surveys with officials and it was apparent that the communities are making use of the land.

“If we are under the national park law, we will continue to be harassed. We have never participated of any designation or enforcement of the law. They don’t give villagers the option to live according to our traditions,” he said.

Tayae said that the communities have been campaigning for 30 years to have their lands taken out of the national park zone, and that he is concerned that the communities will not be able to continue to make a living from this land, and will not be able to grow crops using their traditional rotational farming method, which is not accepted by the law.

The authorities have been preparing to designate the Ob Khan National Park area since 1994, but indigenous communities and community right activists continue to oppose it, as the national park area included community forests and spiritual lands.

Their petition was received by the Samoeng District Chief, who said that the district office will pass the petition onto the relevant authorities, and that although he chairs the meetings, the park officials have the authority in this case. 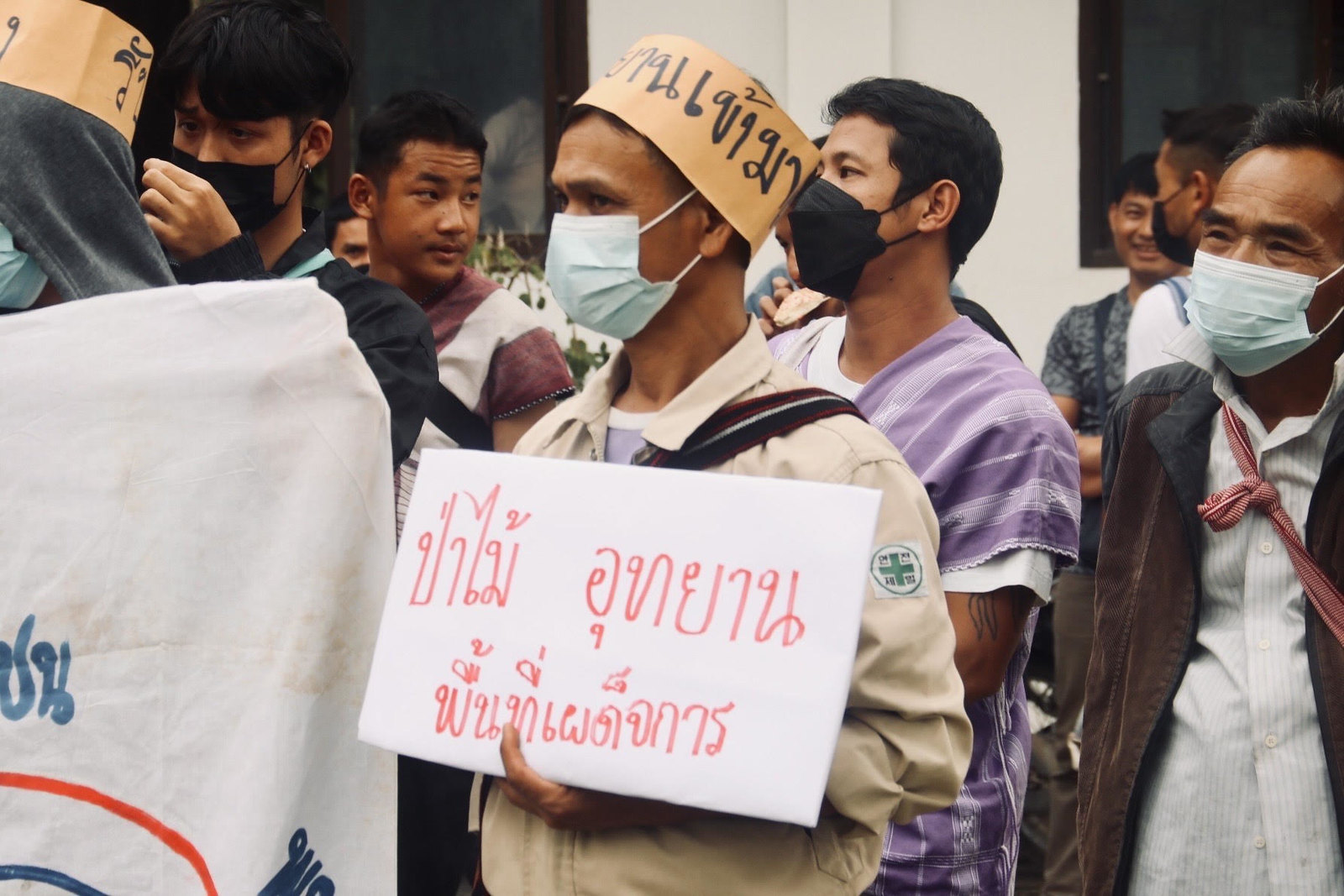 Human rights lawyer Sumitchai Hattasan, Director of the Centre for Protection and Revival of Local Community Rights, told The Active that it is possible that public hearings would be used to legitimize the plan for the national park, since it might not be conducted as a referendum but participants in the hearing might be asked for their opinion. If most people in the meeting agreed with the area being designated a national park, the results of the hearing might be used to back the national park designation, even though some people are affected.

Sumitchai said it is possible that the majority of the participants in the hearing will not be people directly affected by the plan to make the area a national park, and might say they agree with the plan, as they could think that it is a good thing that the authorities want to protect the environment.

He said that the public should keep an eye on the hearings, and that the authorities should prioritize the opinion of the affected communities, and must be able to say how they would compensate the communities. He also asked why the authorities could not exclude these community lands from the national park and whether the authorities only wanted to reach the goal of having at least 40% of the country be a conservation zone.

The Northern Peasant Federation (NPF), the Centre for Protection and Revival of Local Community Rights and partner organizations will visit the communities in Samoeng District before joining the public hearing on 18 October.