Home » Myanmar MiG-29 incursion: a threat that requires more than an apology

Myanmar MiG-29 incursion: a threat that requires more than an apology

Critics contend that efforts by Thailand’s Prime Minister and the Royal Thai Armed Forces to downplay the significance of an incursion into Thai airspace by a Myanmar MiG-29 fighter place border safety at risk. 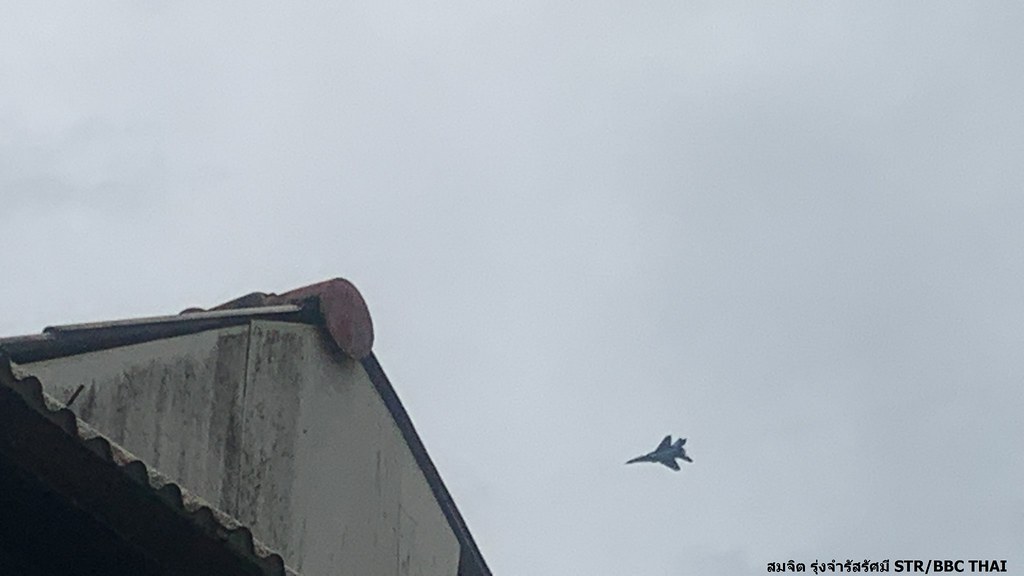 A photo of a Mig-29 fighter was taken from Thai territory on 30 June. (Source: BBC Thai)

A 4th generation Soviet-era multirole fighter jet entered Thai airspace at 11.16 over Phop Phra district, Tak province on a bombing run in support of Myanmar’s military, also known as the Tatmadaw, which is fighting ethnic Karen rebels near the border. In response, the Royal Thai Airforce (RTAF) scrambled two F-16 fighter jets, but the MiG-29 was gone by the time they arrived on the scene.

Reports over the RTAF’s response time vary. Spring News anchorman Danai Ekmahasawat states that it took about one hour for the twin F-16s to arrive. In contrast, a spokesperson for the RTAF claims that their fighter jets arrived within 5 to 10 minutes of the incursion.

In a statement on 1 July, Prime Minister Gen Prayut Chan-o-cha described the incursion as ‘minor incident’ and repeated the Tatmadaw’s explanation that its pilot did not intend to infringe upon Thai airspace, but needed to do so in order to make a turn. 4 days later, Thai Foreign Minister Don Pramudwinai announced Myanmar was planning to issue an official letter of apology for the episode.

Critics have questioned the government’s soft stance, arguing that it damages the Kingdom's safety and reputation and noting that Thailand’s territorial sovereignty has been repeatedly violated over past decades as a result of armed struggle in Myanmar.

Thitinan Pongsudhirak, director of the Institute of Security and International Relations (ISIS) and professor of International Political Economy at Chulalongkorn University, believes that the incursion should be treated as “a big deal”.

According to Thitinan, efforts to downplay the incursion create the impression that the government is unwilling or unable to protect Thai people from foreign forces. Scenes of schoolchildren running for bunkers, orders for air raid drills to be conducted in schools, and the delayed response from the RTAF clearly indicate the risk to Thai lives on the ‘safe' side of the border. 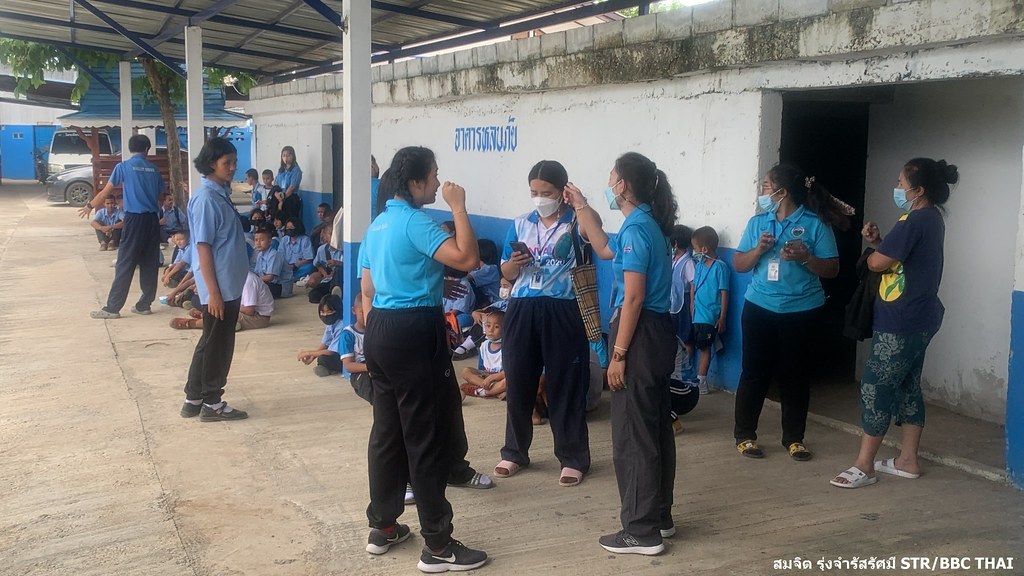 Students and school staff in Phop Phra position themselves at the front of a shelter on 30 June. (Source: BBC Thai)

He also notes that by allowing Myanmar’s air force to compromise Thailand’s sovereignty and territorial integrity, the Thai government is complicit in helping the Tatmadaw terrorize its own people by launching an attack from Thai territory.

According to Thitinan, Tatmadaw forces may have been operating under the impression such tactics would not create any problems.  A day before the incursion, a meeting was held between State Administration Council (SAC) Chairman and 2021 coup leader Senior General Min Aung Hlaing and Lt-Gen Apichet Suesat, Commander of the 3rd Army Region, which oversees the Thai-Myanmar border.

Thitinan characterised the incursion as “par for the course,” noting the close ties and similarities between the two military-backed governments.  He explains that over the past decade, both militaries have subverted the popular will and public interest by staging coups to overthrow democratically-elected governments.

“The military-backed, Prayut-led Thai government’s support for Snr Gen Min Aung Hlaing and the SAC has major political consequences because it goes against the sanctions and preferences of the international community and ASEAN’s own effort to find a peaceful way out of the Myanmar morass through mediation and dialogue. The Thai military also gains more authoritarian momentum and justification if it is not the only regime in the neighborhood to subvert popular legitimacy.”

According to the ISIS Thailand director, the two militaries share a common history of struggle against their own people to dominate political outcomes.

“The message is clear enough. If Myanmar’s military government can become more like Thailand’s with a crooked constitution and bogus poll, then Thailand’s conservative military-backed regime can be more like Myanmar’s Tatmadaw by manipulating and robbing its own people of their vote if that is what it takes to hold on to power.”

Dulyapak Preecharush, Assistant Professor of Southeast Asian Studies at Thammasat University attributes the current state of Thai-Myanmar relations to quiet diplomacy and the ASEAN principle of mutual non-interference in domestic affairs. Since the February 2021 coup in Myanmar, military skirmishes in multi-faceted civil war along a border with complex geography have posed a challenge for Thai security forces.

“Thailand is a front-line state with geographical proximity to Myanmar and close connections with Myanmar military leaders. Thailand shares a porous land border with Myanmar around 2,401 kilometers. A series of military skirmishes between the Tatmadaw and rebel groups or fights among ethnic minority armies have sporadically broken out along the Thai-Myanmar borderland.

Boundary disputes in strategic areas pose an additional security challenge to bilateral relations between the two states. With these basic problems and the current widespread civil war in Myanmar, Thailand is facing a looming threat from an influx of refugees and other security issues such as potential sovereignty violations from military combat in Myanmar.

Myanmar Humanitarian Update No. 19 of the United Nations Office for the Coordination of Humanitarian Affairs (OCHA) estimates that there are 1 million internally displaced people (IDPs) across the country. Of this number, 758,000 people have been displaced since February 2021.

According to Pornsuk Koetsawang, Director of Friends without Borders, an NGO working on Myanmar refugee issues, the majority of refugees crossing the border from Kayin state are Karen.  Other ethnic minorities and Burmese political activists have been coming as well, however.  Reasons for flight stem from fighting, political persecution, and the Tatmadaw’s tactic of shelling villages suspected of harbouring insurgents.

She says that peoples’ lives along the border are increasingly at risk as fighting and airstrikes, especially because many people on both sides of the border often cross to work, farm, and trade. There have been 4 to 5 incursions this year alone according to Gen Supot Malaniyom, Secretary-General of the National Security Council.

At its core, this incursion raises questions about not only the safety of Thai citizens, but also of refugees. Thitinan thinks that “if the Tatmadaw can use Thai air space along the border for bombing runs and ground attack, then there will be nowhere to seek safety for adversely affected innocent civilians.”  As a result, close Thai-Myanmar military ties place Thailand’ international standing as a safe-haven for refugees fleeing crisis and conflict at risk. This reputation could be irreparably damaged, if incursions and violence along the border continue.

Toward a more resilient diplomacy

Dulyapak suggests that these complex security problems can be managed by maintaining friendly diplomatic relations and military cooperation between Bangkok and Naypyidaw through existing mechanisms such as the Township Border Committee (TBC) and Regional Border Committee (RBC) are required.

“Thai policy formulation towards Myanmar should incorporate perspectives, demands, and interests of all stakeholders involved in conflicts in Myanmar's post-coup politics”.

From the diplomatic standpoint, he believes that by balancing the Kingdom’s friendly relations with the Myanmar junta and civilian resistance groups, and by providing humanitarian assistance to those in need, Thai authorities should have enough space to act.

“In this way, although Thai policy with Myanmar is driven mainly by the state security sector, especially Thai Army, National Security Council, and Ministry of Foreign Affairs and tends to appease the junta, more space would be allowed for other stakeholders to protect civilians in the Myanmar opposition movement and among ethnic minority networking groups.”

With regard to balancing security and humanitarian concerns, Pornsuk feels that “there is a way to do better than this. Two neighbouring countries do not need to quarrel or fight each other, but we can show what we stand for. Whatever the Myanmar military does on its border affects Thailand. It affects the security of Myanmar and Thai people who live at the border.”

She also believes that thought process around ‘refugees’ need to change. Thai authorities consistently label refugees as a national security threat. Villagers who live close to the border do not see refugees this way. Instead, they see the Tatmadaw as the problem. Refugees should be granted the protections afforded by international laws that Thailand has signed.

Jared Makana Kirkey is a Prachatai English intern from the Center for Southeast Asian Studies, University of Wisconsin-Madison.