Independent photojournalist Natthaphon Phanphongsanon was attacked by 4 men near the Democracy Monument after a protest. Another journalist and a bystander were injured by pro-monarchists in another incident that took place shortly afterward. 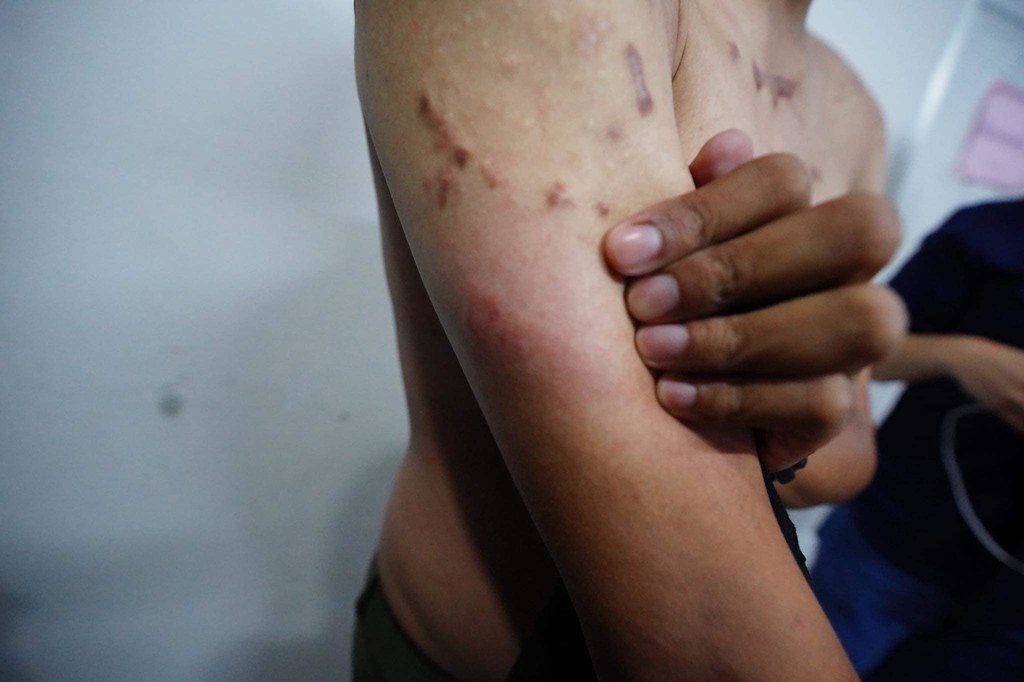 Natthaphon shows a wound on his right arm.

The 4 men, who were wearing vests and casual clothes, approached Natthapon, who was about to leave the area on his motorcycle, asking to see the pictures on his mobile phone, but Natthaphon refused. He was subsequently attacked and hit with batons.

The attack took place after a protest by the activist group Draconis Revolution around the Ratchadamnoen area between 16.00 - 20.30. During the event, a group of pro-monarchy supporters could be seen gathering at the opposite side of the Monument.

At one point, there was a confrontation between the two groups as one member of the pro-monarchy group aggressively approached the protestors. The police came in to settle the situation after several minutes of verbal exchanges and taunts.

According to an interview with Thai Media for Democracy Alliance (DemAll), Natthapon said he met one attacker as he was leaving the McDonald restaurant after finishing his work after the protest ended. As he was attacked, he ran back into the restaurant.

DemAll managed to access the CCTV footage from the restaurant. It can be seen that the man approached Natthapon and another two men later surrounded him shortly before the attack took place. Luckily, Natthaphon’s safety helmet saved his head from injury, but his shoulder and arm were directly hit.

Natthaphon filed a complaint to the police over the assault. However, as he was trying to access the CCTV footage at McDonald, two men in private clothes with pistols approached him, claiming to be police officers, asking him not to collect the footage and instead go to see a doctor. 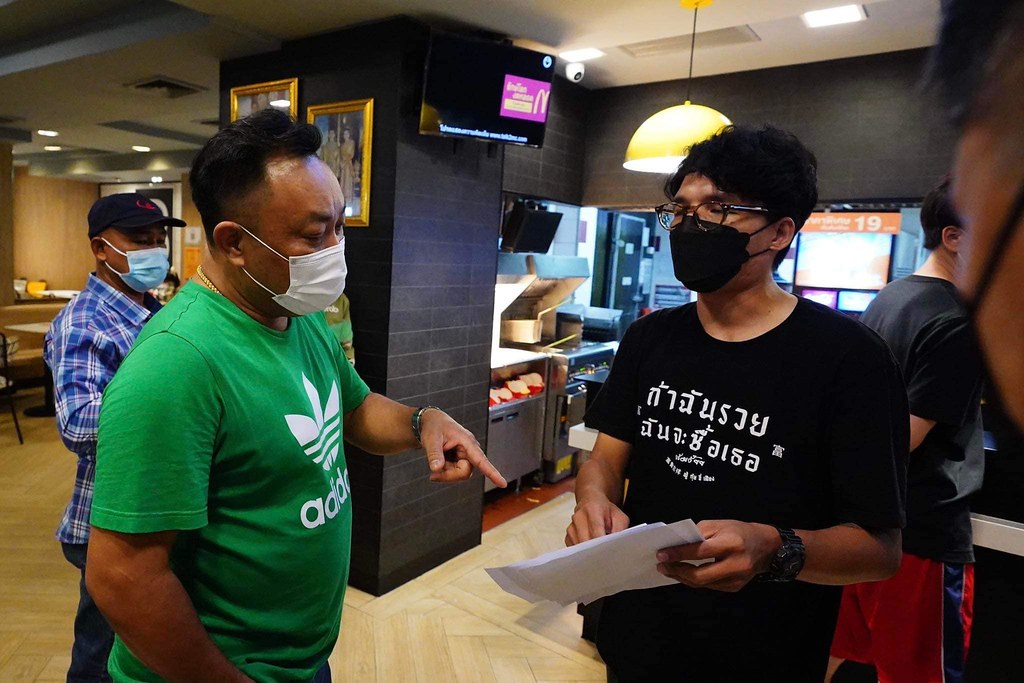 Men claimed to be a police officer try to make Natthaphon leave to see a doctor.

The two left the scene as Natthaphon’s friend made a phone call to the police station responsible for the area to ask whether they had dispatched officers or not, and the answer was no.

As Natthapon was giving an interview to the media in McDonalds, Akkhrawut Kraisisombat, a leading figure from Vocational Students Protecting the Institution, a pro-monarchy group with vocational training backgrounds, together with a two to three followers explained that the attackers were not affiliated with his group and that they wanted the media to remove any accusation of him being involved in the incident.

As the explanation dragged on, quarrels arose and the restaurant staff told the people to talk outside. Shortly after another fight broke out when one of Akkrawut’s group punched a man in the eye, causing bleeding from the eyebrow. One journalist from Political24 who was livestreaming the event was also punched in the hand.

Since the surge of mass protests calling for political and monarchy reform in 2020, the media have rarely been a target of civilian groups who hold different political opinions, and have been most at risk of being from the victims of police operations to disperse protests. This incident has raised concerns about the safety of the media whose job is to present information from the field to their audiences.

Like many others, Natthapon has covered the protests as a citizen photojournalist. He has been a target for public naming and shaming on the pro-monarchy Facebook page Dr.X for covering the protest where the public were asked their opinions about royal motorcades. Despite being wrongly identified as a news agency employee, Natthapon’s name was mentioned along with other citizen journalists and reporters.

On 23 April, Teeranai Charuvastra, Thai Journalists Association (TJA) Vice President for media rights and liberties and reform stated that he and his colleagues are closely monitoring the situation and demanded that the police quickly investigate the incident and inform the public directly about the result.

He expressed concern that the assault had taken place as Natthapon was about to leave the scene as this may cast doubt as to whether the attack had anything to do with him being a journalist and that media practitioners would be afraid for their safety if the investigation result is not clear and the perpetrator could not be brought to justice.

The TJA Vice President also stated that the media, either with official affiliation or independent, have the legal right under the constitution to report information without being harassed and it is the authorities’ duty to protect the exercise of this right.