A joint parliamentary session has dismissed a draft constitutional amendment, proposed by the Re-Solution group and related networks.  The draft was backed by over 135,000 voters. 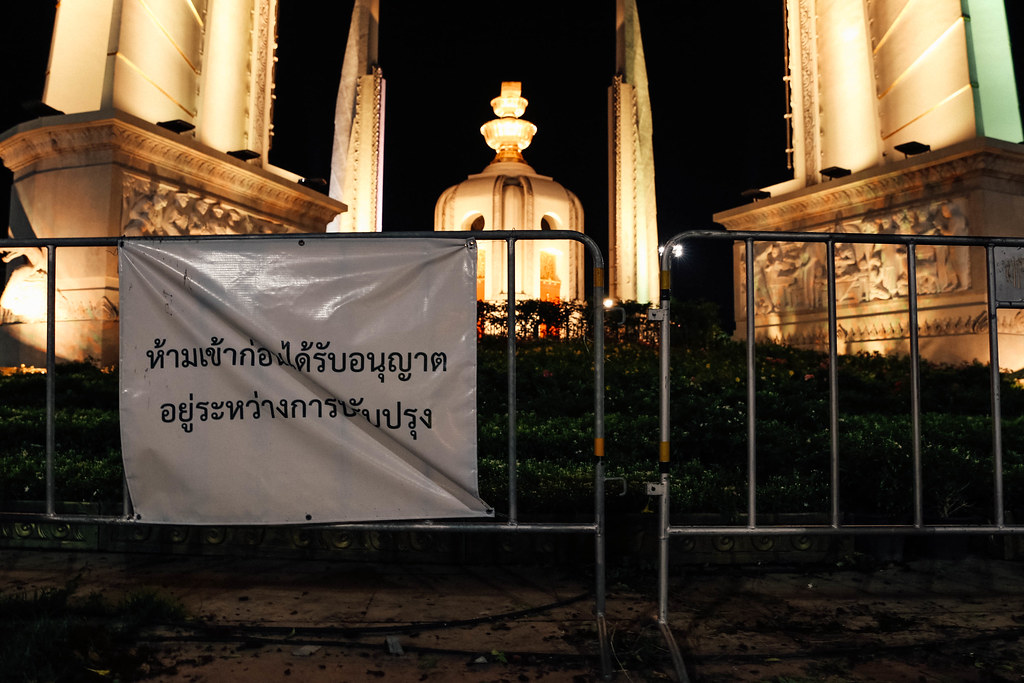 Fences bar people from entering the Democracy Monument. A banner states 'Do not enter without prior approval. Under maintenance'.

To pass the first reading, the draft needed 362 votes from a joint parliament, including one-third of the Senate, a minimum 84 senators. The draft received 203 votes in favour from the House of the Representatives but only 3 from the Senate.  Naowarat Pongpaiboon, Pisan Manawapat and Monthian Boontan are the senators who backed the proposal.

This is the second time the constitutional amendment has been proposed by civil groups. The first version proposed by iLaw, a legal watchdog NGO was rejected in November last year.

This new draft proposal was submitted by iLaw, Re-Solution group, the Progressive Movement and the Move Forward Party. Supported by 135,000 eligible voters, the draft called for several key changes to the current 2017 constitution.

Nicknamed the “Uproot Prayut Regime” amendment, it sought to roll back the legislative legacy of the post-2014 government, repealing a number of the junta’s orders including its mandated 20 year national development strategy. It also called for reform of independent governmental institutions like the Constitution Court and stipulated punishment for staging coups.

One of more hotly debated changes was a plan to abolish the senate and establish a unicameral parliament, a House of the Representatives.

How can the constitution be amended

The first reading is to approve the principles of the constitutional amendment. It requires at least one half of the total votes in parliament (375 from both the House of Representatives and the Senate). At least one-third of the unelected senators is also required to pass the motion.

Even though there have been prohibitions against changing the form of state in every constitution throughout Thailand’s history, there has been no restriction against amending specific chapters or sections. Even then, some sections are more difficult to amend than others under the 2017 Constitution.

After the third reading, there will be an interval of 15 days before the Prime Minister sends the final draft to the King to sign. However, the government must hold a national referendum if the constitution amendment involves Chapter 1 (General Provisions), Chapter 2 (The King), or Chapter 15 (Amendment to the Constitution).

If the amendment is suspected of being unconstitutional, one-tenth of the total number of the current members of parliament has the right to file a joint petition with the Constitutional Court where it shall be decided within 30 days whether the draft would amount to “changing the democratic regime of government with the King as Head of State or changing the form of the State” according to Section 255.