Let the children dream: Srisamorn Soffer’s mission to draw hope for the future 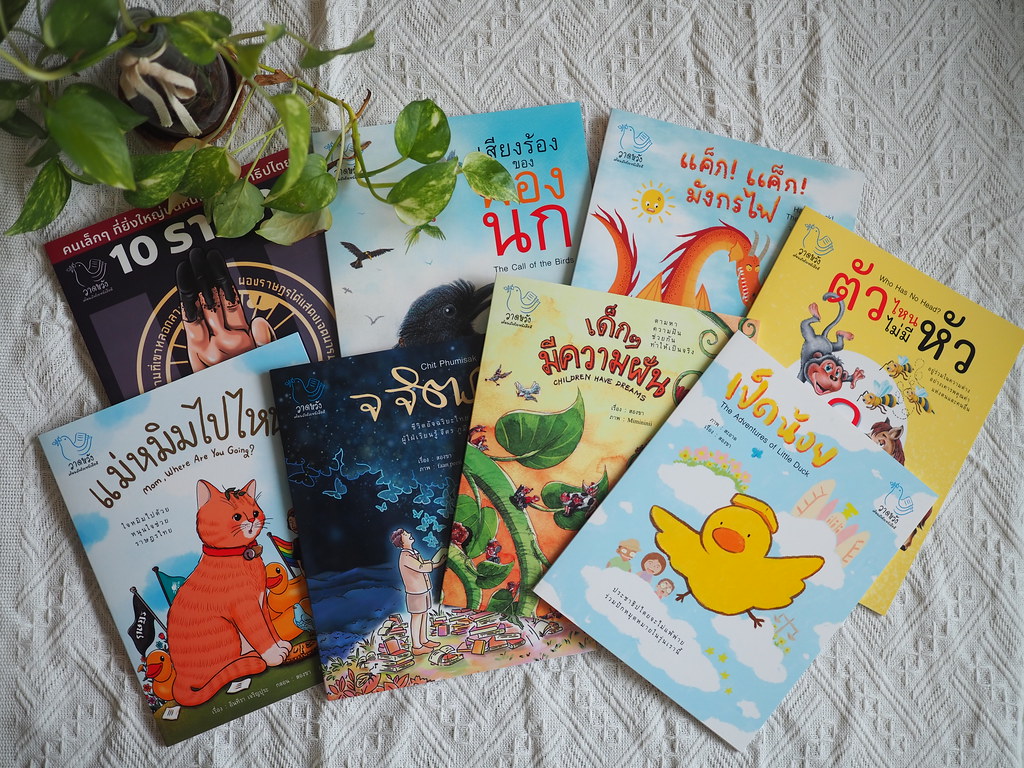 The "Dream of Hope Tales" series

In late September 2021, it was reported that Deputy Education Minister Kalaya Sophonpanich had formed a working group to investigate a series of illustrated children’s books about the pro-democracy movement, claiming that the series might mislead children. It was then reported on 14 October that the working group found that at least five of the eight-book series were likely to lead to violence in children.

Meanwhile, the Office of the Consumer Protection Board (OCPB) summoned the publisher of the series for a meeting, claiming that they had received a request for an investigation into whether selling books on a Facebook page violates the 2002 Direct Sales and Direct Marketing Act. Following a meeting on 12 October 2021, an OCPB officer said that the sellers had done nothing illegal, but the OCPB would investigate further.

The series in question is called “Nithan Wad Wang” (“Dream of Hope Tales”) – a set of 8 colourful picture books about the pro-democracy movement, freedom, and young people’s dream of the future.

Prachatai spoke to Srisamorn Soffer, primary school teacher and children’s book writer, who started the project and who wrote most of the poems in the series, about how the project began, the importance of stories, and young people’s freedom to read. 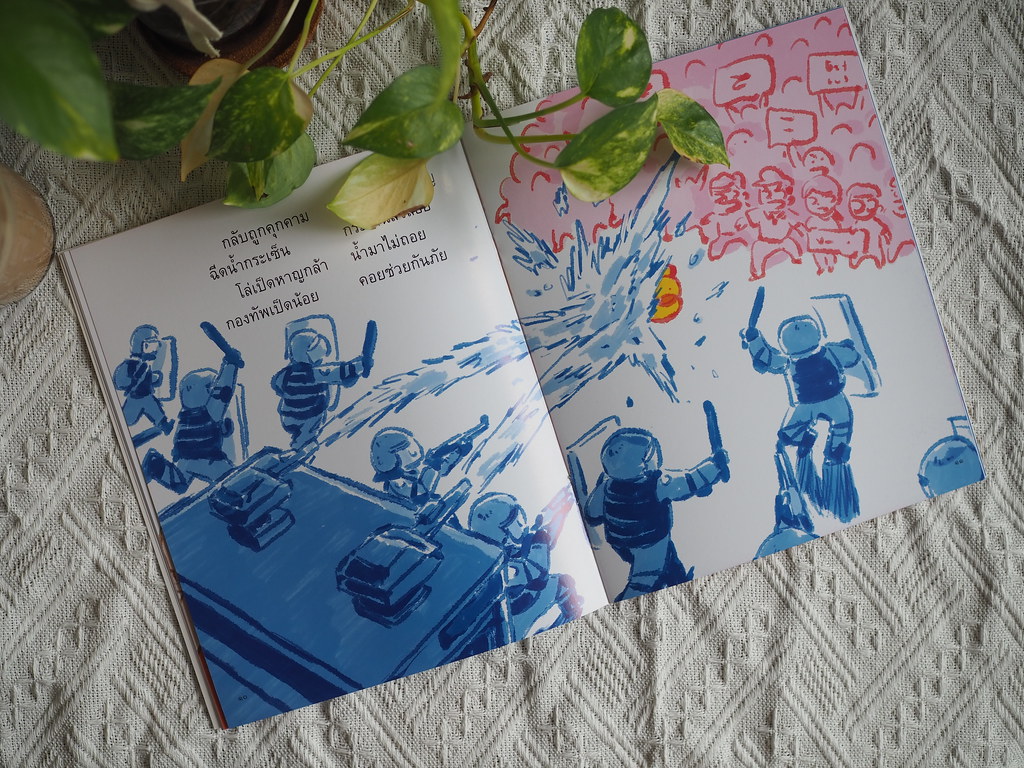 “The Adventure of Little Duck,” an illustrated book by cartoonist Sa-ard about a yellow duck adventuring and fighting for democracy

Children’s literature in Thailand often has the objective of teaching children to be good and obedient, and to instil traditional values like filial piety. There is nothing wrong with this, Srisamorn says, but children’s literature has the potential to be much more diverse.

Srisamorn, who taught primary school and special needs students in the US for 15 years, said that American children’s books have so much variety. Not only that, kindergarten and primary school students are required to read about history, from Rosa Parks and the Civil Rights Movement to the underground railroad which helped escaped slaves in the 19th century. This made her question why such books rarely exist in Thailand.

“In most cases, no one who hopes to get rich would come to work in publishing, especially children’s books. People who work in children’s books must love children. They must love books and want to give children good things. There is nothing wrong with that, but the important thing is that there should be diversity, not 80% one-sided stories or another 10% about development” Srisamorn said.

“The important, basic things about being human, like who I am, what I like, what dreams do I have, what is my country like, who is there, or talking about history and important people, I don’t want to talk about just one person. I want there to be diversity, and we’re not a ministry or a school or anything. We’re just presenting it. Any family who wants to buy them for their children to read are welcome to do so.”

When asked whether people may think that children are too young to read about ‘politics,’ Srisamorn said that it is not about whether they are too young but about how we communicate with children, and adults must also respect children’s judgement and learning capabilities, adding that parents often screen things for their children first anyway and that no one would give their children bad things.

Srisamorn said that while it might have been true in the past that Thai society tended to believe that children can’t think for themselves and must be protected from anything that goes against ‘good morals,’ society is slowly changing and becoming more open. For Srisamorn, society is a living and always changing thing which cannot be kept frozen so that it stays the same.

“If children dream about what they want to do, their lives will have goals. Why should we wake them up? A three-year-old dreams about going to play in the sand pit tomorrow. A five-year-old thinks about going to get ice cream tomorrow. A seven-year-old wants to make this card. It happens at every age. It’s universal. We shouldn’t put them in cages or inside boundaries that are too tight. It’s good to have some loose boundaries with the good intentions of adults and society, but it must be flexible so that everyone is comfortable and respectful of each other.”

Writing for the future 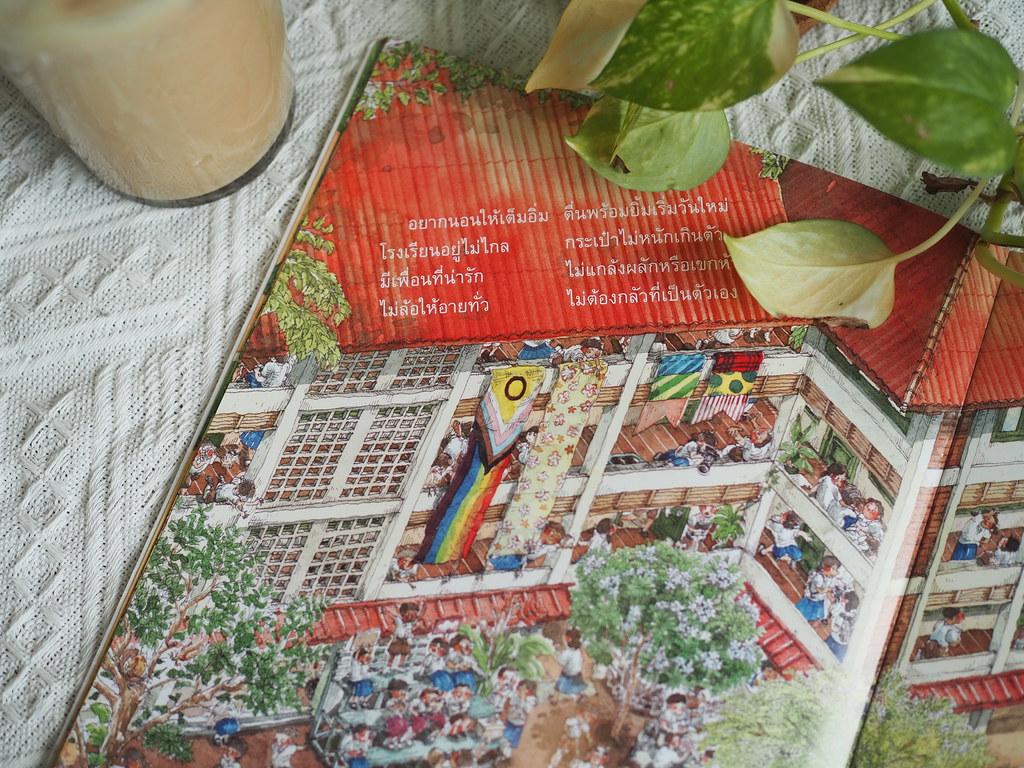 From an illustrated biography of historian and dissident writer Jit Phumisak and “The Adventure of Little Duck,” an illustrated book by cartoonist Sa-ard about a yellow duck adventuring and fighting for democracy to “Mom, where are you going?” which tells the story of the 2020 pro-democracy protests through the eyes of actor-turned-activist Inthira Charoenpura’s cat and “Children Have Dreams,” a ‘Where’s Wally?’-style picture book about what young people dream they want the world to be, the series tells stories about history, social movements, hope, and the freedom to dream.

Last Children’s Day in January 2021, Srisamorn saw the viral video clip by the YouTuber Pimrypie, where she went to an indigenous community on a mountain in Chiang Mai and installed solar panels to produce electricity. During the video, the YouTuber said that the children do not have dreams, which Srisamorn, who taught in a similar Karen indigenous community as a new graduate, said was partially true. She said that it is in children’s nature to dream, and thought of starting this project.

Srisamorn said that she contacted several well-known people and asked whether they wanted to write a children’s book to communicate with the younger generation. She said that she was looking for a diverse group of people with a lot of experience, as she thinks that they would offer another perspective for children as well as showing their gentler side, but many who were asked hesitated, as they are not sure how to write for children.

“Many people get stressed about writing for children. What if they couldn’t write well enough? They have an awareness, and everyone said they’ve never done it before. I’d tell them to write anything,” Srisamorn said. 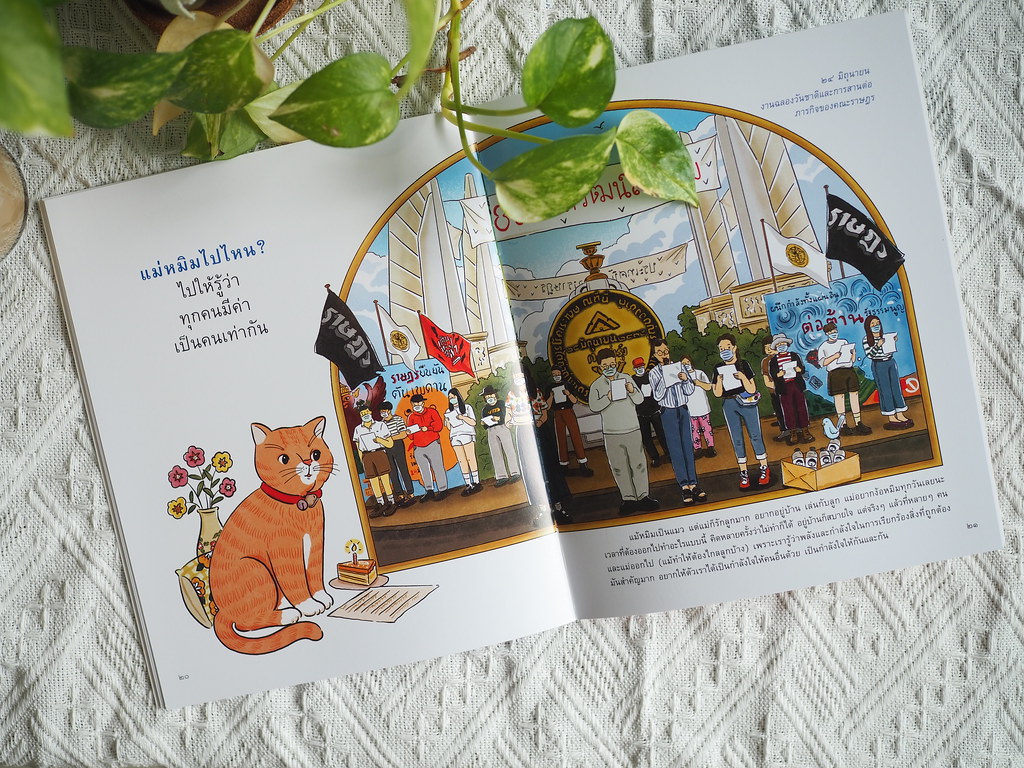 An illustration from "Mom, where are you going?" depicts an event at the Democracy Monument on 24 June 2021. Mim, Inthira's ginger cat, is looking from a corner of the page.

When actor-turned-activist Inthira Choroenpura was asked to join the project, she told Srisamorn that she doesn’t know what to write. After Inthira told Srisamorn about her ginger cat Mim, who often meows at her whenever she is leaving the house, Srisamorn told her to write the book as if she is telling her cat where Mommy is going.

The book, which contains illustrations of events from the 2020 - 2021 pro-democracy protests by artist Phetladda Kaeochin, is narrated through a poem by Srisamorn, and includes short notes from Inthira about what she has done during the protests.

Other than Inthira, activist Sombat Boonngamanong wrote “Hack! Hack! The Fire Dragon,” a story about the fight against a fire-breathing dragon attacking an indigenous village, drawn from his experience working with the Mirror Foundation’s forest fire-fighting volunteers in the north of Thailand.

As for the Jit Phumisak biography and whether children would find it hard to identify with the story, Srisamorn said that she felt that Jit was a genius, and while intellectuals often see Jit as a serious person, Srisamorn thinks that he might have had a fun side and had many interests and talents.

“I wanted to tell children, look, whatever you want to learn, you can,” she said. “Like Jit, when he was in jail, he learned Chinese. When he met another inmate who came from a hill tribe, what did he do? He made a Thai-Lahu dictionary. I think that the world must know about someone like this, so the children know that learning is fun.” 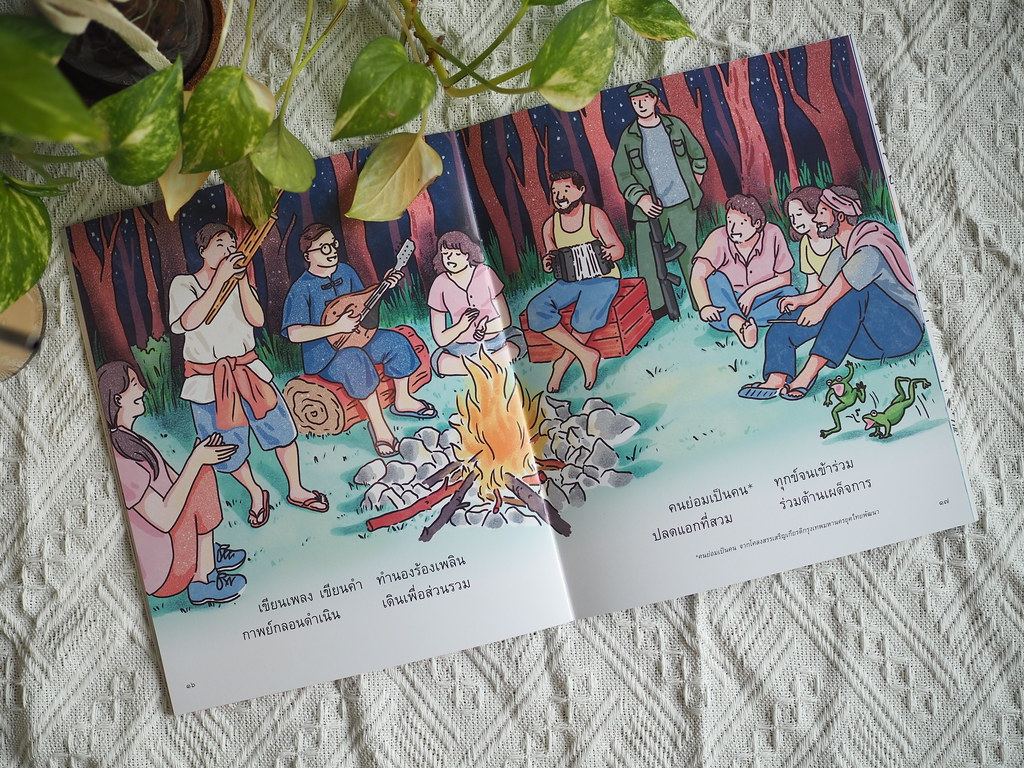 Srisamorn said that she was not looking to make money from the books, and that everyone on her team was almost like a volunteer, but she wanted to show a gentler perspective to a society which is currently full of anger. The books became like therapy for the writers and artists in the project.

“They got very little money, because I don’t have a lot of money. I have been saving up for many years, and I didn’t think that, suddenly, I would be doing this, but I think that, with the situation in Thailand as it is, I don’t want to just be angry at the government. I was never a rude or angry person, and then I saw anger bursting out, and people are getting ruder in society. I felt that if this comes out, there will be a gentler side, another perspective, and people who are famous can present something else,” she said.

Even though Srisamorn said that she didn’t think the books would sell, they are sold out within a week of the report that the Ministry of Education was investigating them. The team decided to donate the profit to pro-democracy activist groups and civil society organizations.

“I think that, say we make 8 books a year, within 5 years we’ll have 40 books. It’s not because I want to be famous. I want people in publishing to see that these books work, that people are interested in them, so other people want to do it too,” Srisamorn said. 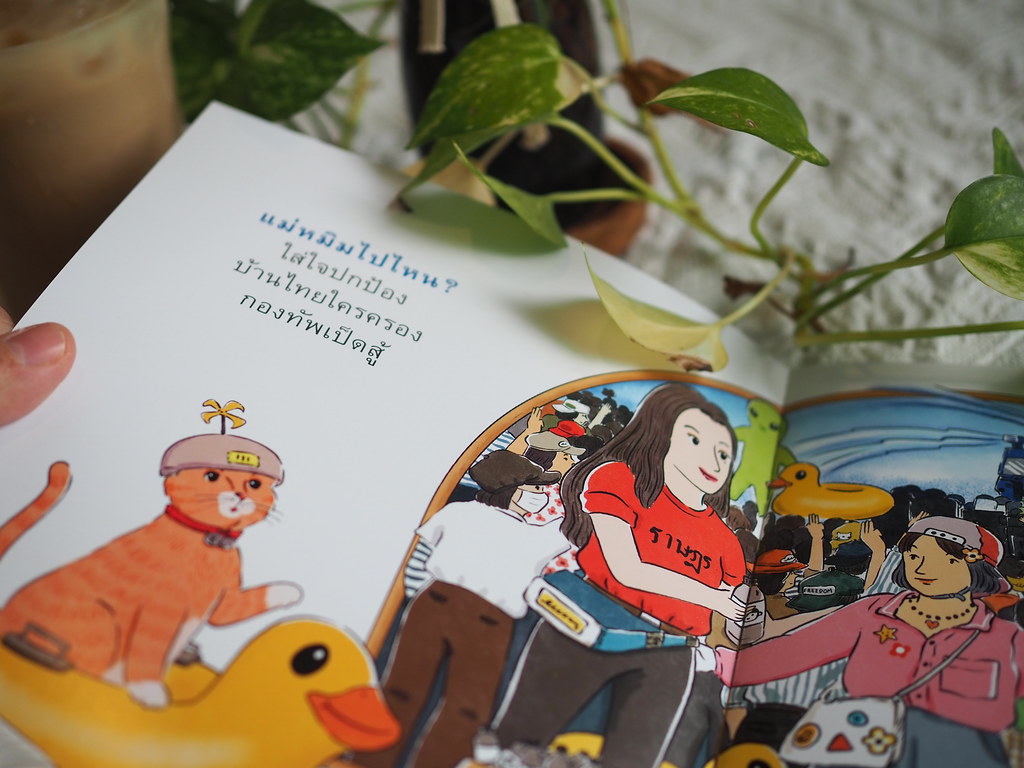 She admitted she was shocked at first when she heard about the Ministry’s investigation, and confused as to why it happened, but she added that she has to thank the ministers and senators, as well as other public figures, who made the books more widely known.

Despite the situation, she also said that the team has received a lot of support from readers, many of whom paid more than the price of the books as donations and many bought the books to donate to schools. She is also happy that children like the books. Not every child would like all 8 books, she said, but there are a lot of choices they can choose from, and she insisted that there is nothing illegal or immoral about them, or anything that goes against the ethics of someone who is a teacher, a writer, and a mother.

“I wanted to tell children to be happy, to have fun with life, to be healthy, and to open your world to a lot of things. Whatever you want to do, you should try it, like when you were little and learning to stand, or the first time you learned to ride a bike. If you fall, then you get back up, or if you ride a bike and didn’t like it, then you go and play football. It’s not that everyone is going to force children to read these books or play mancala or anything. You have the choice. Do whatever you want,” Srisamorn said.