2 online reporters were arrested on the night of 13 September while covering the protest at Din Daeng intersection and charged with violating the curfew and the emergency decree. 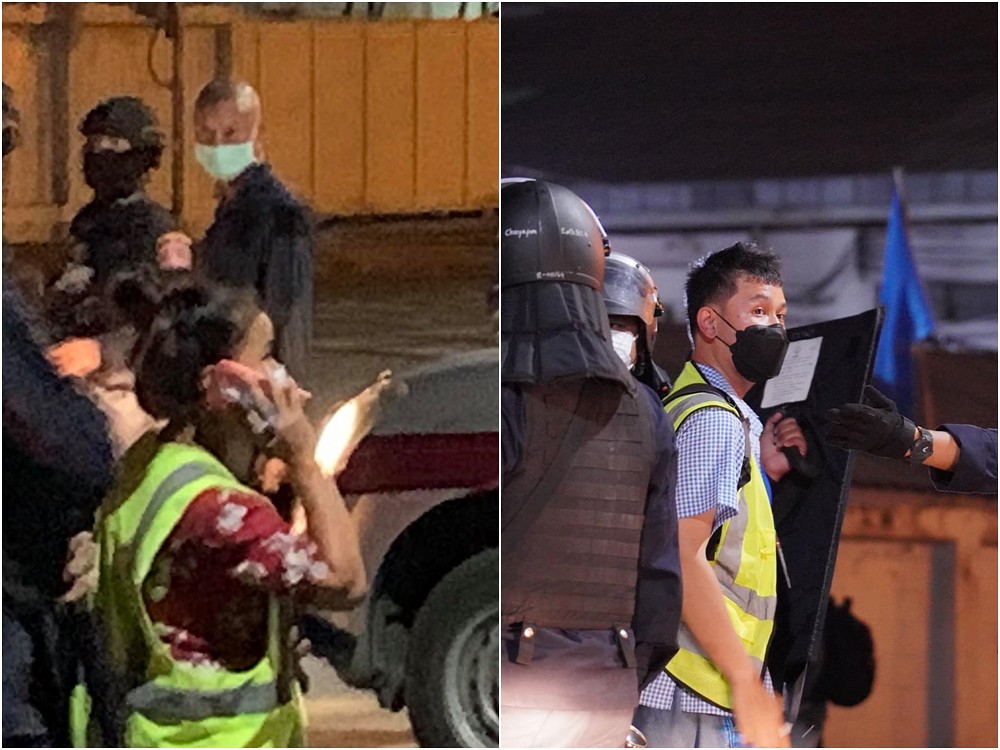 From left to right: Panida and Nattapong during the arrest.

Arrested were Nattapong Malee from Ratsadon News and Panida (surname withheld) from the Free Our Friends page. Live footage from Ratsadon News showed police asking Nattapong to produce written permission for him to work during the 21.00-04.00 curfew. He responded that his application was pending, and was taken in.

Ratsadon News is one among many online citizen journalists providing close coverage of the protests at Din Daeng through live broadcasts. These have occasionally exposed police brutality.

The two were detained overnight and taken to court the next day to request further temporary detention. The court released them on bail with no security.

Thai Lawyers for Human Rights reported that 11 people were arrested on the same night. 5 were minors, one of whom was 12 years old, 2 were reporters, and one was a volunteer nurse.

On 14 September, Khaosod reported that Pol Col Kritsana Phattanacharoen, deputy police spokesperson, said in a press briefing that Youtubers and freelancers from Thai and foreign news agencies are not allowed to cover the protests if they cannot confirm their affiliation.

Prior to the arrests, Pol Maj Gen Piya Tawichai, Deputy Commissioner of the Metropolitan Police Bureau, gave an interview to the Question Time programme on the Thai PBS channel that the police have received media reports about protesters or Youtubers disguising themselves as journalists.

Pol Maj Gen Piya said the police would remove unaffiliated journalists or Youtubers from the scene.

Reports of unaffiliated reporters and freelance journalists and photographers being blocked from reporting and assaulted have increased in the latter half of 2021 as police increased pressure on pro-democracy protesters.

Sirote Klampaiboon, a Voice TV reporter, tweeted on Monday night (13 Sep) that a group of reporters at Din Daeng had rubber bullets fired at them after the police picked them out with green lasers.

Somchai Homla-or, a human rights lawyer, in an interview with Backpack Journalist on 17 August after a freelance photographer was hit by a police baton that destroyed her camera lens, said that the authorities have no right to use violence to stop people and the media from taking photos or videos as they serve as tools for monitoring the protest situation.

Somchai cited a Court of Appeal Region 5 ruling, which said that people can take photos and videos when the authorities make an arrest or perform their duty at checkpoints as it is meant to increase transparency regarding the authorities’ actions. Citizens and journalists are able to record the situation as long as they do not interfere with the authorities.

The Thai Media for Democracy Alliance (DemAll), a group of pro-democracy media and content creators, published a statement after the arrest of the 2 citizen journalists, saying that it found many reports that reporters were asked to produce press cards, to stop live broadcasts and to leave the scene, with the curfew used as an excuse.

DemAll demanded that the police not restrict the definition of the media to only those affiliated with major press outlets and put a stop to threats against journalists.

“The press cards are not the main issue. Even citizen journalists are regarded as journalists with the duty of relaying information to the people,” stated the statement.