Nattacha Boonchaiinsawat, a Move Forward MP, has released voice clips, videos and documents regarding military operations creating fake social media accounts to conduct information warfare against the people and close monitoring of those seen as the Prime Minister’s political enemies. 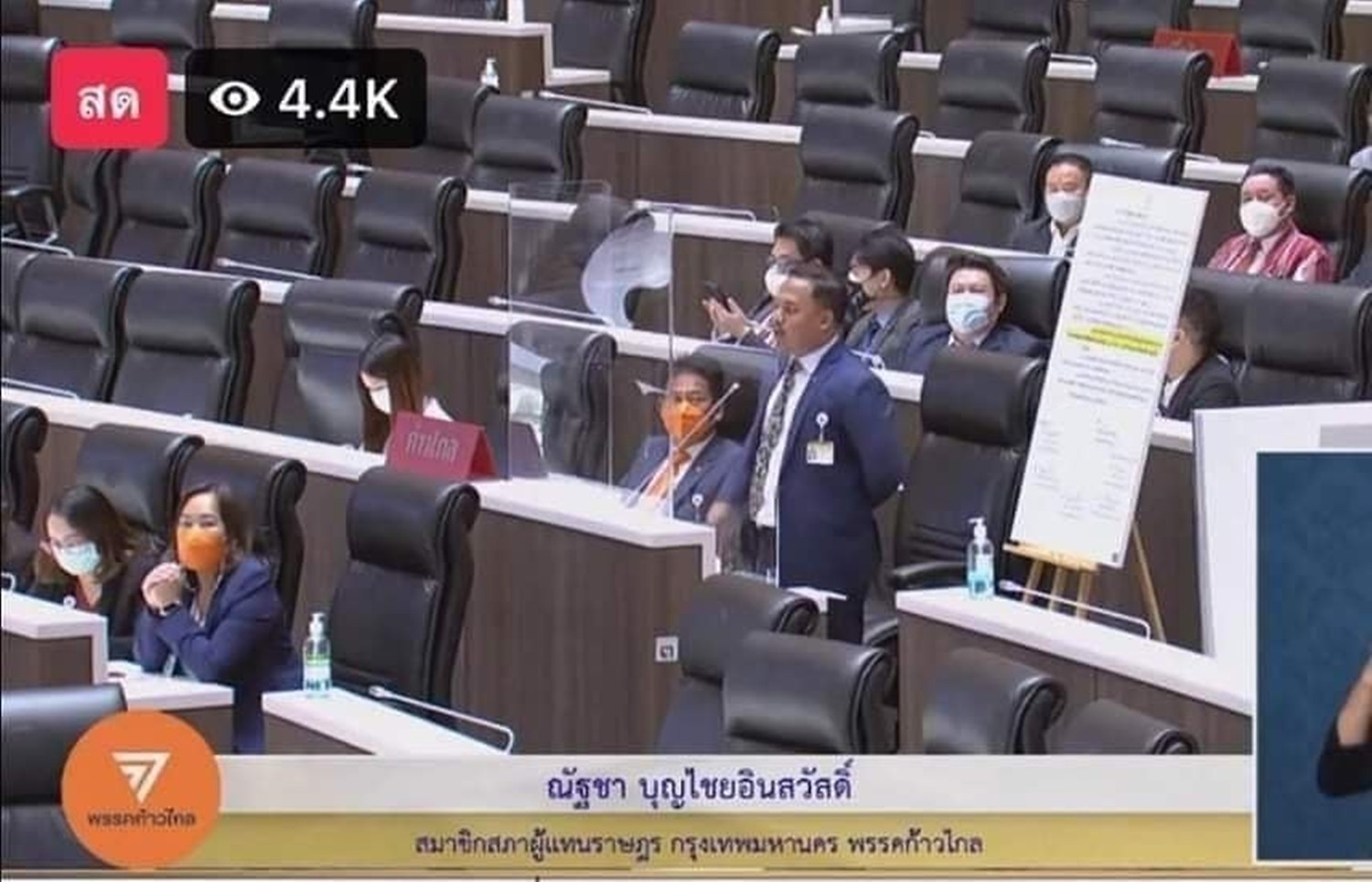 Nattacha gives a speech in the no-confidence debate on 31 August.

In the no-confidence motion against Gen Prayut Chan-o-cha, Prime Minister, Defence Minister and Director of the Internal Security Operations Command (ISOC), the Move Forward Party (MFP) has exposed his involvement in overseeing the military’s Information Operations (IO).  On 31 August, Nattacha used the description “Operation IO: racket preying on the country”.

The MFP representative said the military divides IO into 3 colours: white for promoting the PM and his work, grey for responding to criticisms against the government and black for discrediting opponents, propagating hate speech and sharing misinformation. Videos presenting the army’s ‘Cyber Warriors’ and photos of soldiers attending a workshop on how to use social media were shown.

Further documents detailed methods for transferring SIM cards and securing documents, lists of infantry units responsible for pages created by the military and the criteria of rewards for the unit that has the most followers, the best cyber warrior and the best operation room.

The name of Col Noranot Rungyanathon, chief of 2nd Army Region Multimedia Operations, was shown in a document which was a clear order to operate news and cyber operations in multiple dimensions.

A voice clip alleged to be a conversation with an operational level source, said there is 240 baht daily allowance for soldiers working on IO, amounting to 7,500 baht per month, but about 6,000 baht was creamed off by superior officers.

Nattacha also questioned the ISOC budget request of 7.88 billion baht, of which 3.76 bn baht will be used for ‘secret operations’ and maintaining internal security. 361 million baht was also requested for creating a big data platform.

Nattacha observed that this was connected to the latest secret ‘watchlist’ that was recently leaked This showed that various individuals were being monitored, including MFP leader Pita Limjaroenrat, MFP MP Rangsiman Rome, Progressive Movement leader Thanathorn Juangroongruangkit and secretary-general Piyabutr Saengkanokkul.  There were also documents authorizing security agencies to monitor the activities and movements of political activists who do not agree with the government, with a clear allocation of responsibilities among units.

In the case of MFP MP Wirot Lakkhanaadisorn, there was a detailed report that included photos of his house, car registration documents and family members, including his child.

“...Amid the Covid-19 situation that has led to people dying, losing their jobs, and losing income, many families have nothing left. I would briefly like to ask General Prayut whether he has ever had a conscience, because the people that coming out to criticize, to post criticisms about your work, behind their keyboards they are typing with tears in their eyes.

“But in the end there is an organization, Operation IO, that attacks, discredits, accuses. The head of the military, instead of having soldiers bear weapons to fight the state’s enemies, instead turns them into keyboard thugs,” said Nattacha.

Deputy Defence Minister Gen Chaicharn Changmongkol responded to Nattacha’s comments by saying Gen Prayut has never given orders to the military or ISOC to distribute misinformation or discredit anyone. The military has checked the documents presented by the MFP and found that they are fake.

Chaicharn pointed out many flaws in them, such as the misspelling of the name of a high-ranking general, different signatures and errors in the positions of some officers at the time.

Nattacha responded in parliament on 1 September saying that he cannot teach the military how to correct misspellings and signature differences but the date and log number of the documents may not be much of a burden for the Deputy Defence Minister to take a look at.

The important thing that the Deputy Minister must clearly state is whether or not it is true that the military has a mission to infiltrate citizens.

On 2 September, Deputy Army Spokesperson Col Sirichan Ngathong said Nattacha’s accusations were incorrect and had damaged the military. The 2nd Army Region has filed a legal complaint for the sake of accuracy, according to Matichon.