Thanat Thanakitamnuay, an anti-Thaksin campaigner turned pro-democracy activist has been accused for Section 112 of the Criminal Code for wearing an outfit similar to one worn by the late King Rama IX. Police also brought charges against an individual in Nonthaburi for allegedly removing a royal portrait and treating it in a disrespectful manner. 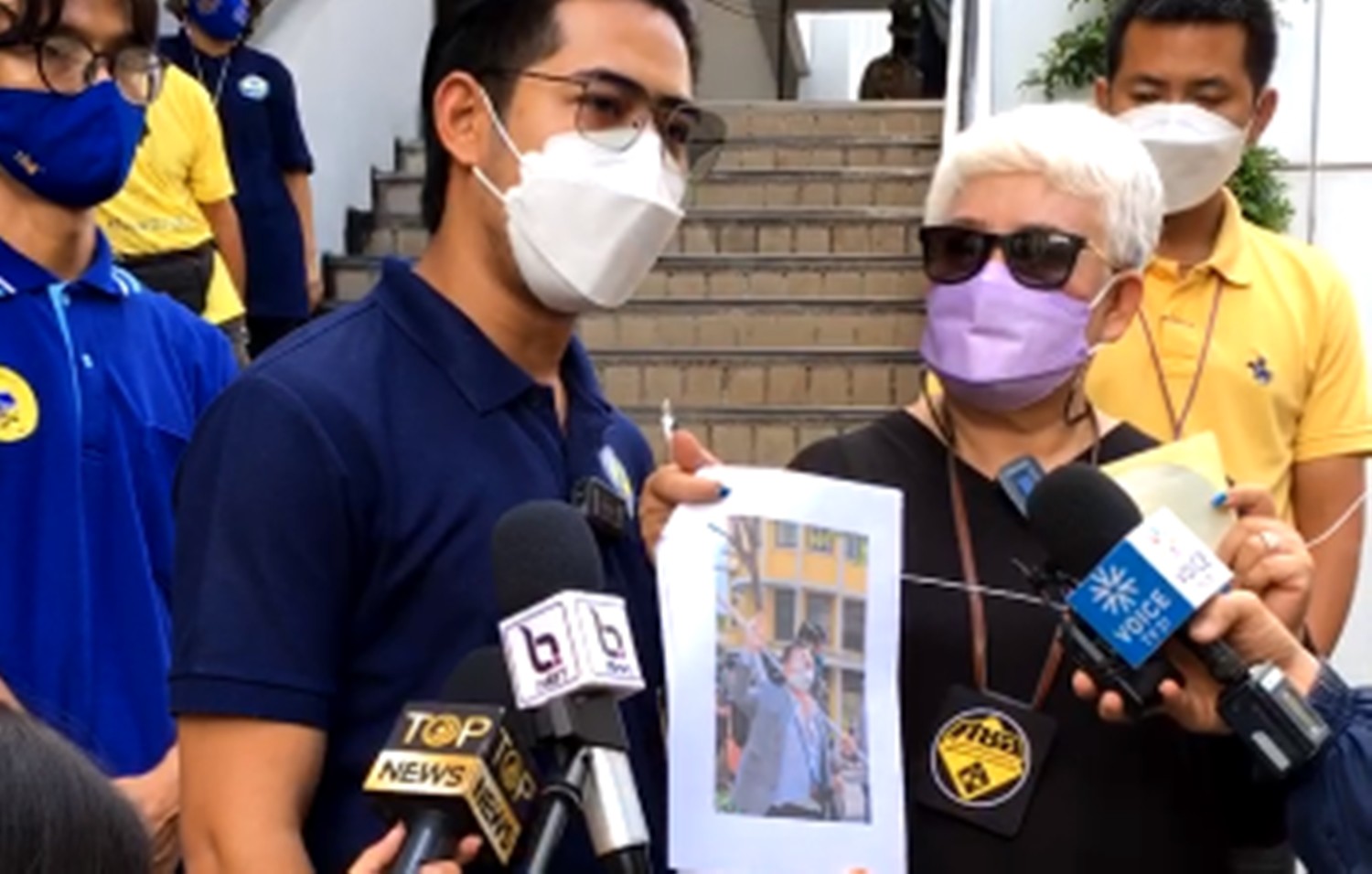 From left to right: Jakkapong and Nangnoi give the press an interview.

On 30 August, Nangnoi Atsawakittikorn from the Thailand Help Center for Cyberbullying Victims and Jakkapong Klinkaew from the People's Centre for the Protection of Monarchy filed a royal defamation complaint against Thanat at the Samranrat Police Station on behalf of the “People’s Network for the Protection of the Royal Institution”.

The group contends that Thanat was intentionally mocking the late King Rama IX by wearing a suit, an eyepatch and a camera to a protest on 22 August. They also assert that a speech Thanat gave on 25 August calling for Section 112 to be abolished reflects his intent to overthrow the monarchy.

According to Nangnoi, Thanat’s costume and camera were props employed to ridicule a well-known photograph of King Rama IX.  The late King often wore a camera around his neck when travelling upcountry. 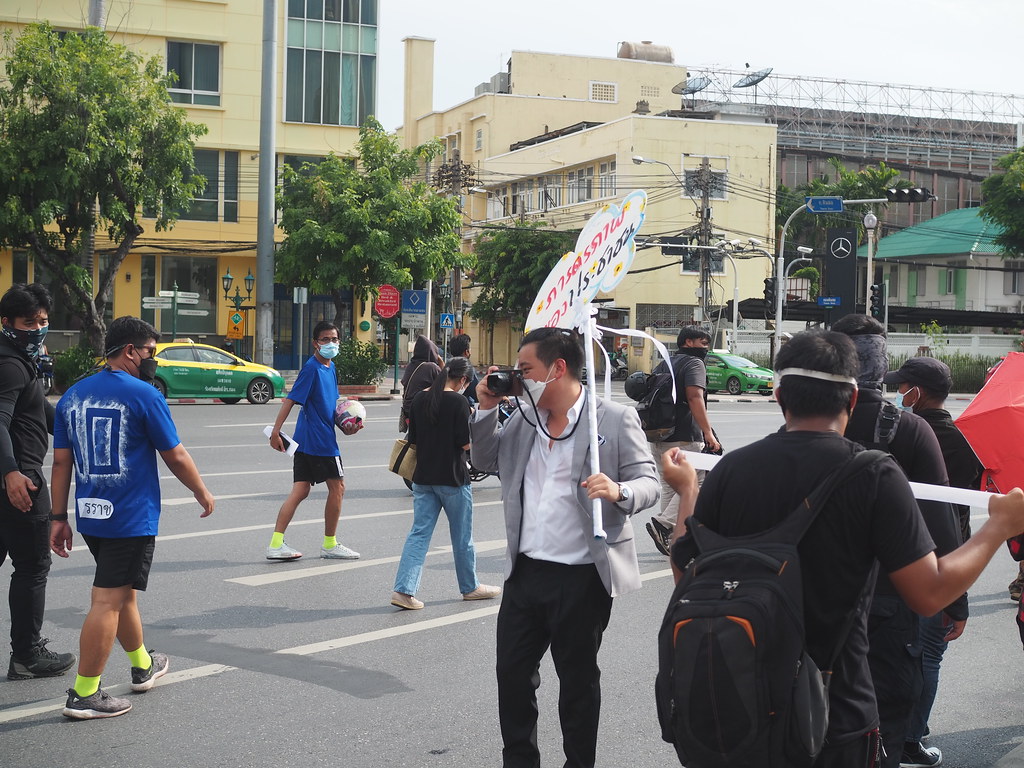 Thanat takes a photo during the protest march.

This is not the first time that royalists have taken umbrage with the costumes of pro-democracy activists. Conservative netizens put up a storm of critical commentary after the 28 January 2021 posting of a picture in which Chaiamorn ‘Ammy’ Kaewwiboonpan, a lead singer in the Bottom Blues Band, dressed in an outfit similar to one worn by King Rama IX. 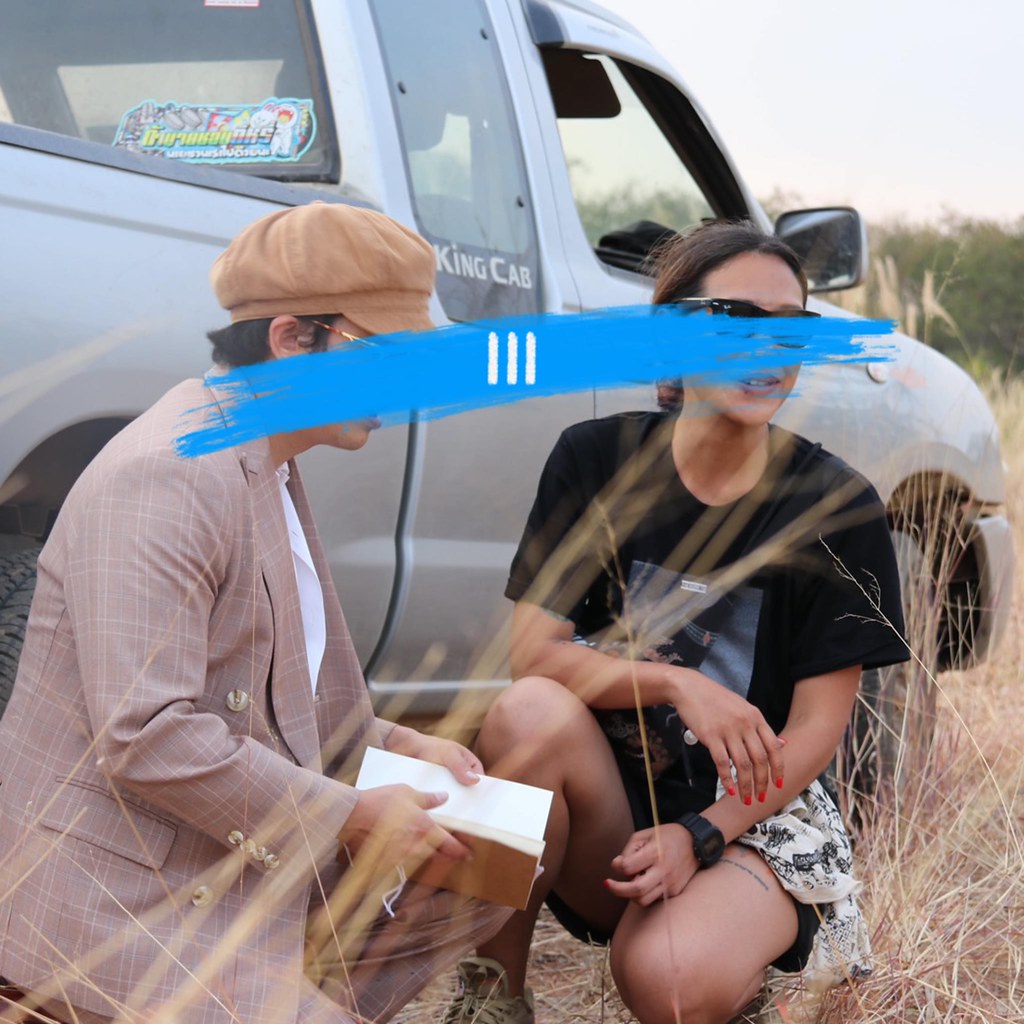 Thanat’s ‘imitation’ may well have been unintentional. He claims he was wearing an eye patch because his right eye was injured during the police suppression of a 13 August protest. However, some royalists contend that he was making fun of King Rama IX, who lost the vision in his right eye as the result of a traffic accident in his youth.

On the same day, Thai Lawyers for Human Rights (TLHR) reported that Sirapat Deesawat, 35, from Nonthaburi province, was summoned and charged by the police with royal defamation at the Rattanathibet Police station. He had earlier been released on bail after being arrested for theft and curfew violations.

He was arrested without a warrant on 10 August after a Prachachuen village chief complained that a King Vajiralongkorn portrait in a decorative golden frame was stolen from the entrance of a housing estate. A CCTV camera recorded the theft.

According to the police investigation, Sirapat removed the portrait and its frame, dragged both along the ground face down for about 190 metres. Reaching a nearby market, he gave the portrait to Kanokwan Chimnok and dumped the frame in a canal.

Police contend that Sirapat’s action amount to defamation of the monarch as he King’s portrait is supposed to be respected by people and should be kept in a place befitting his majesty’s station. Sirapat denied the charge and was released on bail.

Kanokwan was charged with receiving stolen property. She surrendered on 24 August and was released after placing a 90,000 baht security.

Section 112 of the Criminal Code stipulates that it is illegal to defame, insult or threaten the King, the Queen, the Heir Apparent or the Regent. It carries a 3-15 year jail sentence. It has been used against people who address monarchy reform or criticise matters related to the royal institution.

Human rights organisations regularly question the law and its problematic enforcement.  A complaint to the police from anyone can result in the filing criminal charges, defamation has been subject to a wide range of interpretations, and people can receive lengthy jail terms for doing nothing more than exercising their speech rights.

With the growth of the pro-democracy and monarchy reform movements, people have been charged for giving speeches about the monarchy, for allegedly burning royal portraits and memorial arches, for wearing crop tops and for paying respect to others who wear them.

TLHR reports that as of 31 August, 126 Section 112 charges are being pursued against 124 defendants.  In 2018, there was a brief hiatus in new charges being filed. The number increased dramatical after a November 2020 announcement by General Prayut Chan-o-cha that ‘every law’ would be used to handle the protests.