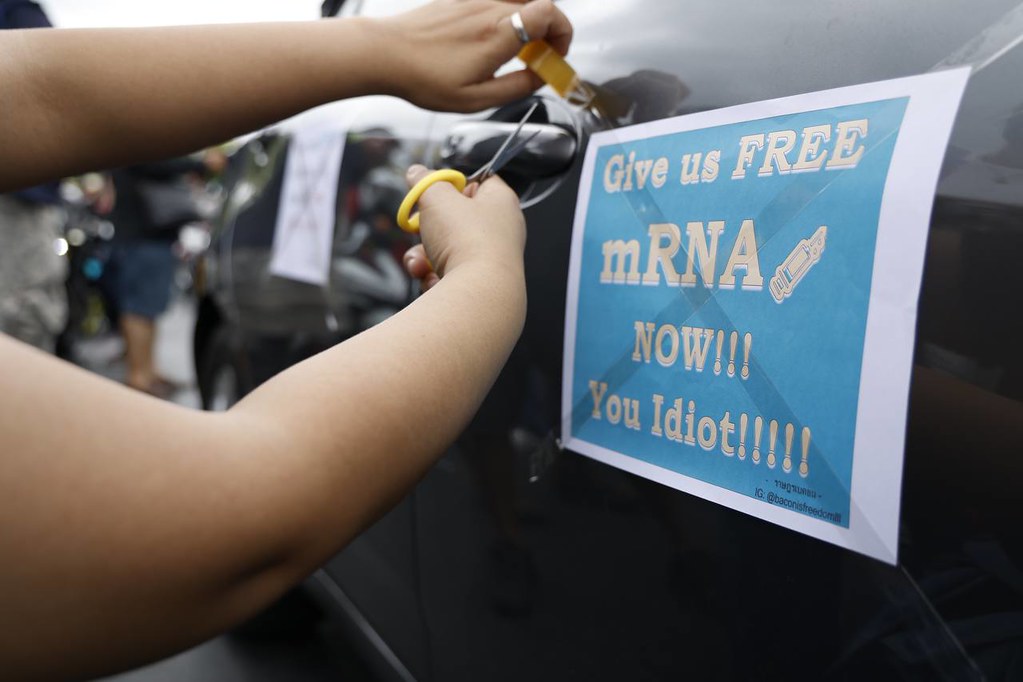 A protester at the 18 July protest taping a sign to their car with a message demanding mRNA Covid-19 vaccines due to slow vaccination rollout and the government's failure to acquire mRNA vaccines, proved by research and global statistics to be of higher efficacy.

The order was signed by Gen Prayut and published in the Royal Gazette on Thursday (29 July). It was issued under Article 9 of the Emergency Decree and is effective from Friday (30 July) onwards.

The order prohibits the reporting or distribution of information which may cause public fear or which intentionally distorts information creating misunderstanding during the emergency to the point where it affects national security, or peace and order, or the good morals of the people, whether through printed publication or any other form of media.

The ISP must also inform the NBTC of the IP address and other related information, and the NBTC must inform the national police headquarters in order to press charges. The NBTC may also launch legal proceedings against any ISP who does not follow its order.

The legal watchdog NGO iLaw observed that Article 9 of the Emergency Decree, which prohibits the spread of information which can cause public fear or misinformation affecting national security, public peace and order, or the people’s good morals, does not give the authorities the power to suspend internet services or cut communication, which is under Article 11 of the Emergency Decree and can only be done during a Severe State of Emergency. The prime minister therefore does not currently have the power to issue an order to suspend internet services.

iLaw also observed that the current National Broadcasting Commission has punished media outlets who report on political issues at least 59 times, including Voice TV, which has been penalized at least 21 times, including warnings, fines, and suspensions.

The Computer Crimes Act, meanwhile, allows state officials to request a court order to block certain URLs, but not to suspend internet services to an IP address or device.

Section 36 of the current Constitution also states that a person “shall enjoy the liberty of communication by any means” and that censorship, detention, or disclosure of information communicated between persons is not be permitted unless by a court order, “or where there are other grounds as prescribed by law.”

The government also issued an order on 12 July 2021 imposing a 2-year imprisonment or a fine of up to 40,000 baht or both for anyone spreading information or news that causes public fear or affects national security, raising concern over freedom of information and shrinking civic space during a time when slow vaccine rollout, low testing rates, and high rates of Covid-19 infection have overwhelmed the public health system, causing people to express grievance, anger and calls for the immediate import of mRNA vaccines and self-testing kits.

The Thai government declared a State of Emergency at the end of March 2020 to curb the spread of the Covid-19 virus. It has now been extended to the end of September 2021.

New restrictions issued under the Emergency Decree, including curfews, travel restrictions, closure of malls and limits on social gatherings of five or more persons, caused concerns that they will be used to restrict freedom of expression and peaceful assembly. Amnesty International issued a statement on 13 July calling on the authorities to use these measures only to address the worsening Covid-19 outbreaks and not to penalize those exercising their rights.