Family still waits for justice one year after activist’s disappearance

A year after the disappearance of Thai activist Wanchalearm Satsaksit, his family still waits for justice while official investigations seem to have stalled. 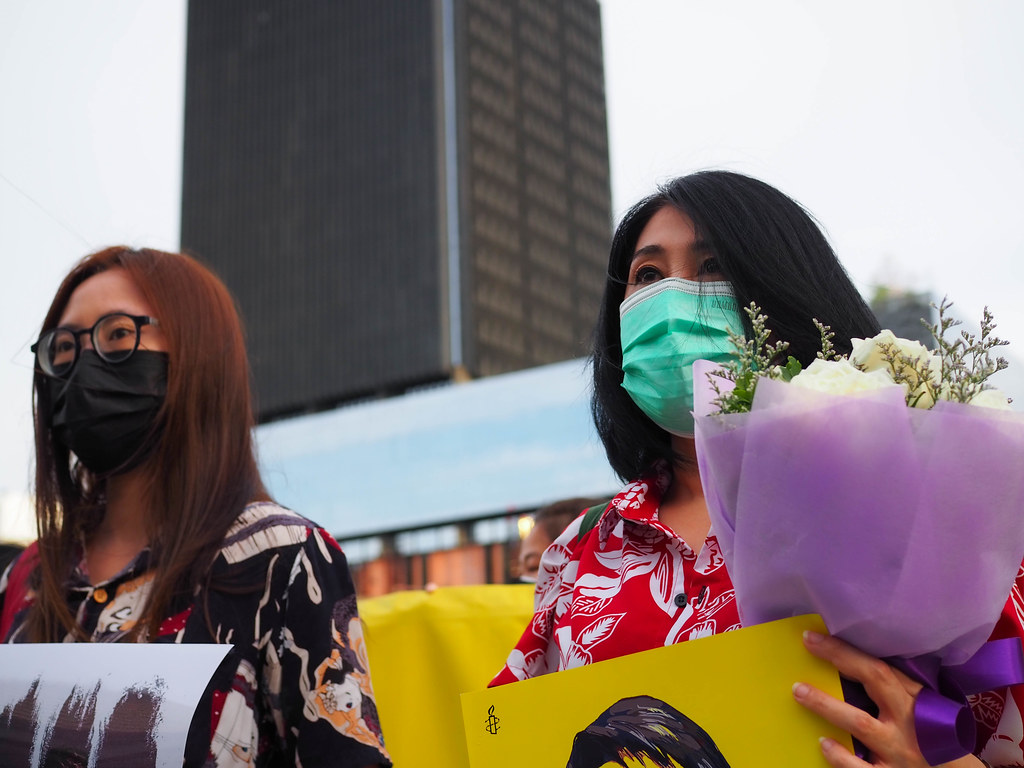 A candlelit vigil was held in front of the Bangkok Art and Culture Centre (BACC) in memory of Wanchalearm and other victims of enforced disappearance last Friday evening (4 June), which was the 1st anniversary of Wanchalearm’s disappearance, organized by Amnesty International Thailand.

The event started on the Pathumwan Skywalk, where participants stood in silence for 12 minutes, one for each month Wanchalearm has been gone, while holding posters with a drawing of Wanchalearm. Many were wearing Hawaiian shirts, the iconic look Wanchalearm is often seen wearing in pictures, while some also wore a Wanchalearm mask. 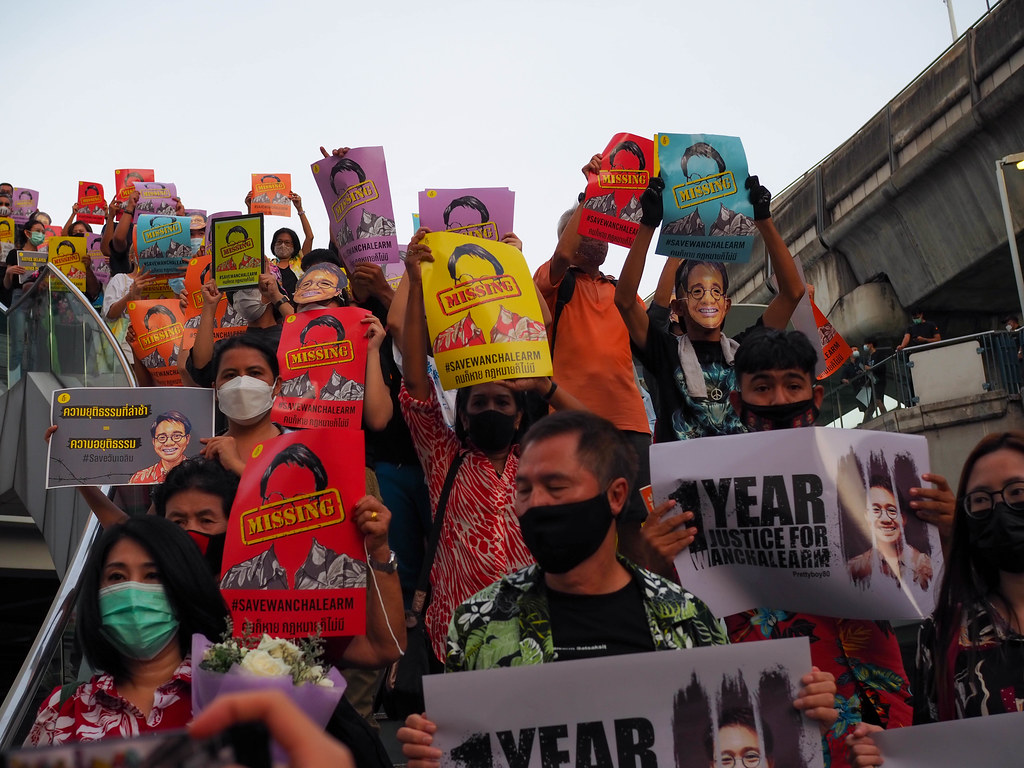 Participants walking down to the courtyard in front of BACC

After the 12 minutes silence, the participants move down to the courtyard in front of BACC, where they lit candles to form the sentence “Stop enforced disappearance.”

Wanchalearm’s sister Sitanun Satsaksit, who has spent the last year searching for her brother, thanked those who came to participate in the event, as well as the press for continuing to cover Wanchalearm’s disappearance.

“Thank you for coming to the anniversary of the year where we cared about each other, but the government did not care about us at all,” Sitanun said. “What they did to us for the entire year, do they know that we are hurt? Do they know what we have lost? The only ones I have to thank are ourselves, the people, who understand and care about each other.” 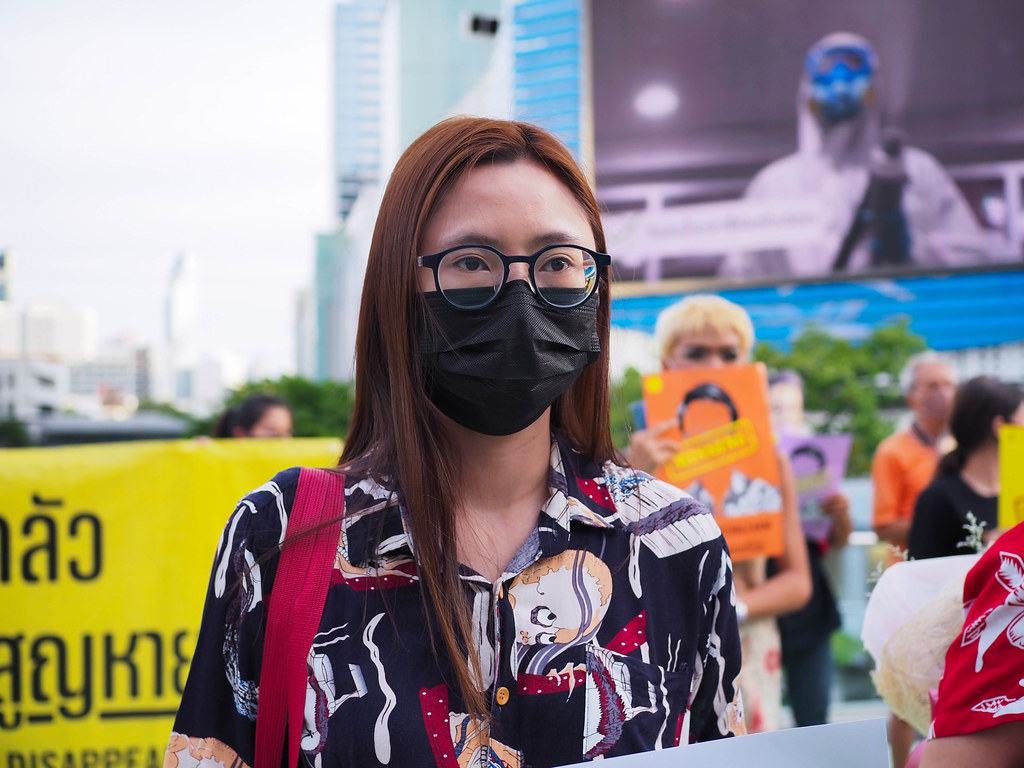 "Please give us the truth. At least it will be an end to our mental torture,” Prakaidao said.

Wanchalearm fled Thailand after the 2014 military coup and had been living in exile in Cambodia. On 4 June 2020, he was abducted from in front of his condominium and has not been heard from since, while no progress has been made in investigations by the Thai and Cambodian authorities. 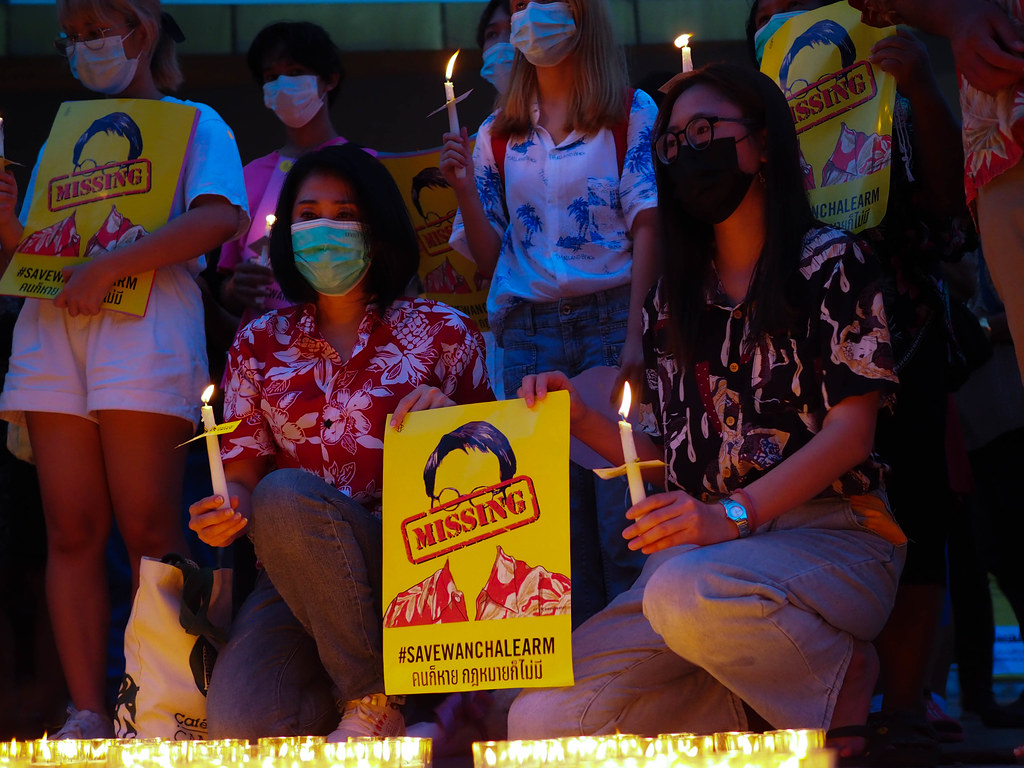 Earlier in the day, Sitanun and representatives from Amnesty also went to the Ministry of Justice to submit an open letter demanding that the Thai authorities launch a formal and independent investigation into Wanchalearm’s disappearance, since there has been no progress in the investigation conducted by the Cambodia authorities. The letter also called for the law to be revised in compliance with international standards to end torture and enforced disappearance.

Amnesty International Thailand director Piyanut Kotsan said that there is still no justice for Wanchalearm and his family, and that the Cambodian authorities have clearly failed in investigating Wanchalearm’s fate and whereabouts and are not able to follow their legal obligation to properly investigate enforced disappearances.

Amnesty therefore calls on the Ministry of Justice to revise the anti-torture and enforced disappearance bill to ensure that it is in compliance with the Convention against Torture and Other Cruel, Inhuman, or Degrading Treatment or Punishment and the International Convention for the Protection of All Persons from Enforced Disappearance.

Amnesty also called on the Office of the Attorney General and the Department of Special Investigation (DSI) to conduct a thorough investigation while respecting the victim and the victim’s family’s right to justice and to end the culture of impunity related to human rights violations such as torture and enforced disappearance. 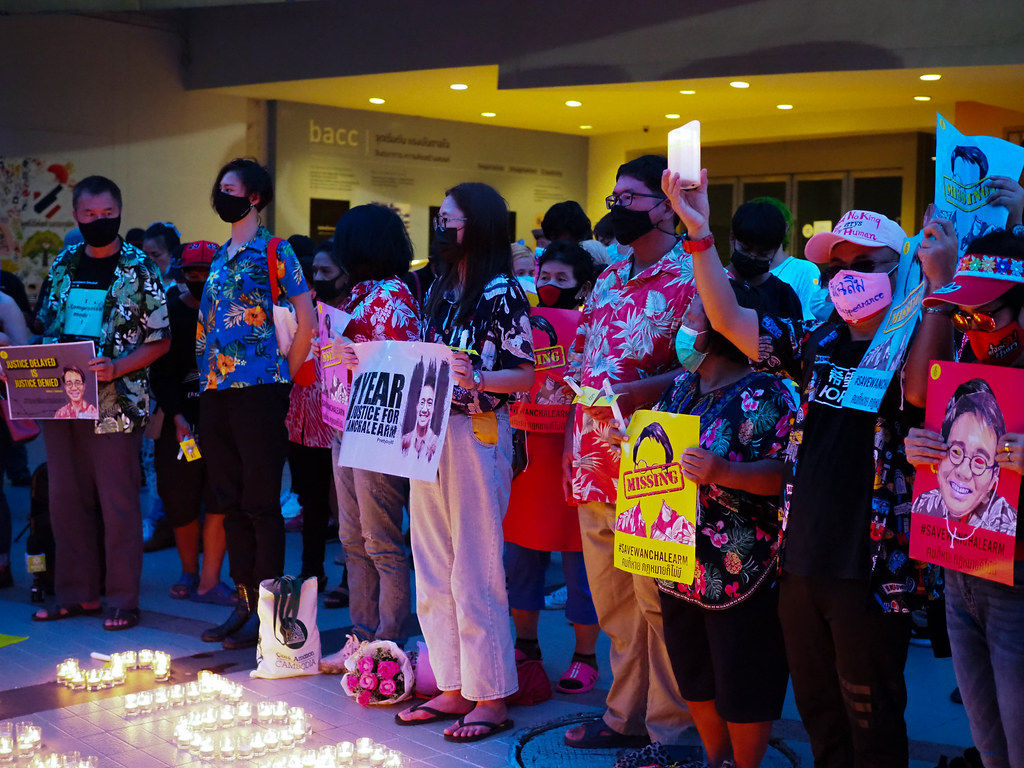 Participants holding posters during the vigil in front of BACC

“It is high time for the Thai authorities to step up and undertake a thorough, impartial, and independent investigation into the enforced disappearance of their own citizen abroad since the past few years saw several enforced disappearances of Thai exiles from neighbouring countries. A truly independent investigation free from government interference is desperately required,” Piyanut said.

Amnesty also called on the ASEAN Intergovernmental Commission on Human Rights (AICHR) to take a more active role in facilitating cooperation among ASEAN countries in supporting victims of enforced disappearance, as well as locating and releasing forcibly disappeared persons in Southeast Asia.

On the same day, several embassies in Bangkok, such as the German, the Australian, the Austrian, the Swedish, the British, the Canadian, the Swiss, the Danish, and the Finnish posted the same picture on their Facebook pages along with a message against enforced disappearance.

Most posts stated that “hundreds of thousands of people have vanished during conflicts or periods of repression in at least 85 countries around the world”.

The message also says that enforced disappearance is “unacceptable and contrary to international human rights law, and families and societies have a right to know the truth about what happened to their loved ones” and asks “How would you feel? Would you miss them? Would you be begging to know what happened? Would you do all that you can to find them? Would you want justice?” if a loved one suddenly disappeared. 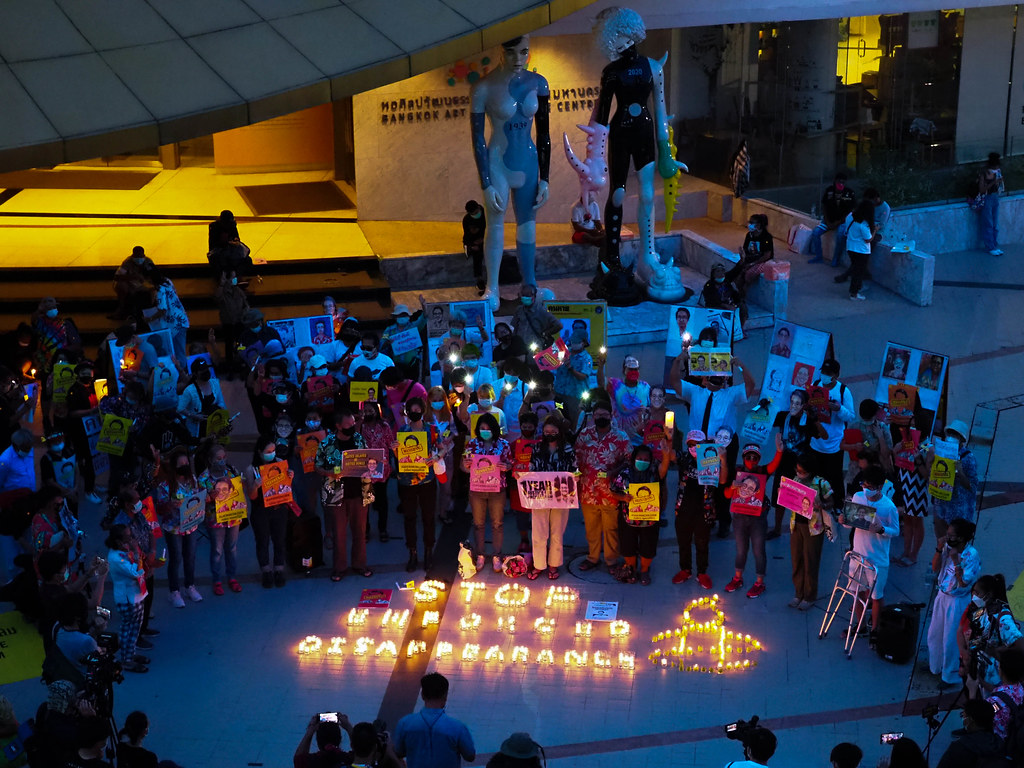 The International Federation for Human Rights (FIDH) also issued a joint statement with the Cambodia Human Rights and Development Association (ADHOC), the Cambodian League for the Promotion and Defense of Human Rights (LICADHO), iLaw, the Manushya Foundation, Thai Lawyers for Human Rights (TLHR), and the Union for Civil Liberty (UCL), reiterating their call for the Cambodian government to determine Wanchalearm’s fate and whereabouts and “deliver justice to his family,” and for the Thai authorities to cooperate with Cambodia in the search for Wanchalearm and to assist his family members in seeking justice.