A spokesperson for the state prosecutor has announced that cases has been filed against Anon Nampa, Somyot Pruksakasemsuk, Patiwat Saraiyaem and Parit Chiwarak under Section 112 of the Criminal Code for giving speeches about the monarchy in protests during 2020, according to Thai Lawyers for Human Rights. 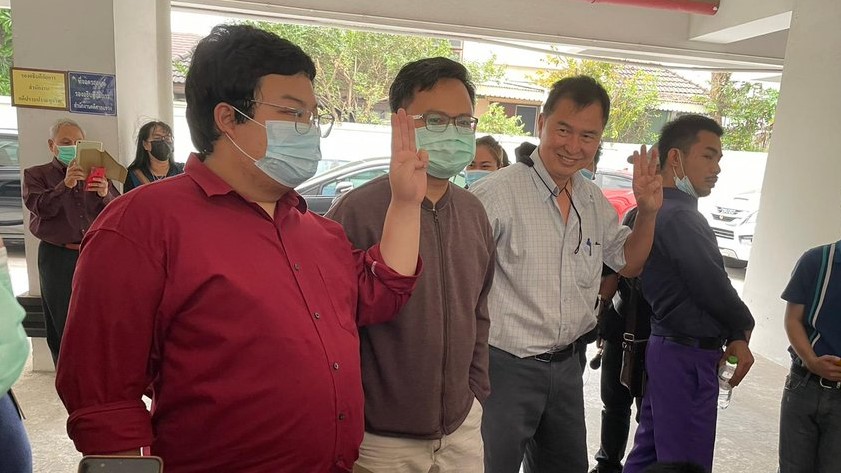 From left to right: Parit, Anon, Somyot and Patiwat at the court.

The cases stem from 2 separate events. The first is the 19-20 September protest at Thammasat University and Sanam Luang for which all four have been charged under the lèse majesté law, the sedition law (Section 116 of the Criminal Code), and the Act on Ancient Monuments, Antiques, Objects of Art and National Museums.

The second is the ‘mobfest’ protest at the Democracy Monument on 14 November for which only Parit has been charged. Sulak Sivaraksa, a Thai historian and Somchai Homlaor, a human rights lawyer are reportedly listed as witnesses.

iLaw reports that bail has been denied by the court, which ruled that the cases carry heavy sentences and the four have a tendency to repeat the offences. They will be detained in prison pending trial.

The detention during trial means they will be imprisoned indefinitely until the trial is over unless the bail would be granted at some point along the way.

The 2021 People’s Party Plaque was installed on Sanam Luang, which is recognized as an archaeological site.

These are the first lèse majesté cases to have finally made their way to the courts since the mass arrests and prosecutions after Prime Minister Gen Prayut Chan-o-cha vowed in November 2020 to use ‘every law’ to deal with the pro-democracy protesters who have been rallying for political and monarchy reform.

All other cases are still under police investigation.

According to THLR, at least 58 people have been charged under Section 112 in 44 cases. 23 cases were filed by ordinary citizens, 3 by the Ministry of Digital Economy and Society and the rest by the police.