Responding to the questioning of the government’s Covid-19 vaccination programme and its strong relationship with private company funded by King Rama X, government representatives teamed up to file lèse majesté and computer crime charges against the leader of the Progressive Movement. 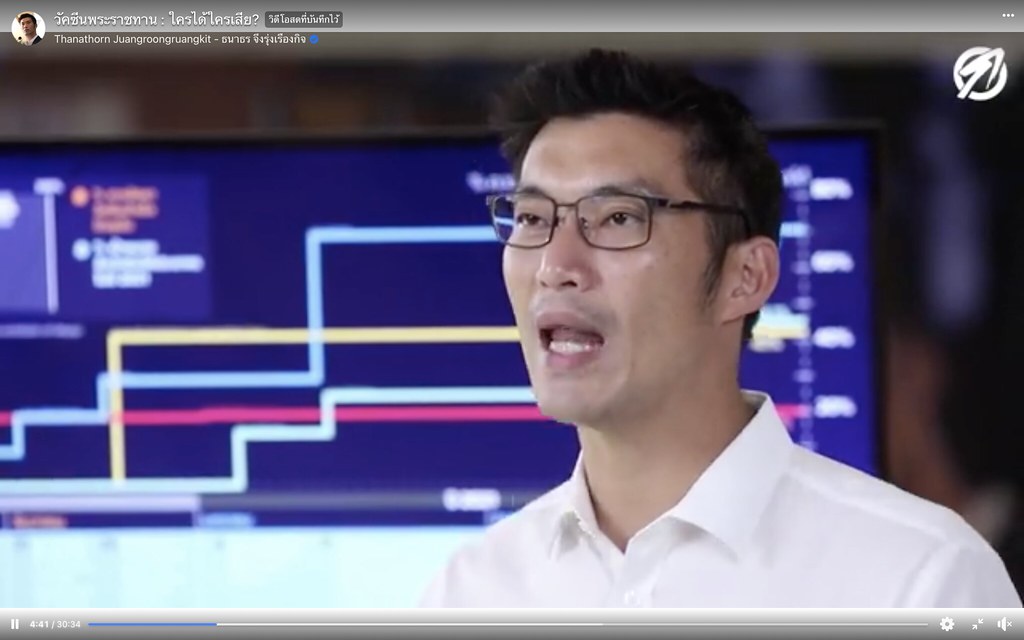 Nawin Chochaiyathip, Deputy Minister of Digital Economy and Society (MDES), Tossapol Pengsom, an official from the Prime Minister’s Office, and Suporn Atthawong, Deputy Minister of the Prime Minister's Office, went to the Technology Crime Suppression Division to file the complaints on 20 January, according to Matichon, Voice Online and Prachachat.

Tossapol said that Buddhipongse Punnakanta, the MDES Minister, told him to file complaints against Thanathorn as his 30-minute-long Facebook live presentation, which was uploaded on YouTube, has 11 instances that may be in violation of the lèse majesté law and the Computer Crime Act. .  Nine of the offending sections have been identified.  Others who are involved with the video will also be sued.

On the same day, Thanathorn’s Facebook Fanpage responded to the complaints, questioning the government’s intentions in its vaccination plans and its reliance on Siam Bioscience. The issue can be solved by clarifying the company’s technology transfer deal with AstraZeneca, the British-Swedish pharmaceutical group, said Thanathorn.

Thanathorn’s "Royal Vaccine: Who Benefits and Who Doesn't?" on Facebook live on 18 January, criticizes the government's slow procurement of vaccine in comparison with other countries in Asia. He also questioned why Siam Bioscience is the only company to strike a deal with AstraZeneca to produce its mRNA vaccine.

He expresses concern that ‘betting on a single horse’ puts at risk timely access to the vaccine for Thai people.

The company has King Rama X as its only shareholder, replacing CPB Equity Company Limited, an investment arm of the Crown Property Bureau, which had held all shares since the company was founded.

On 19 January, Gen Prayuth Chan-o-cha, the PM responded to Thanathorn's criticism saying that he would order legal action against any statement about the vaccination plan that is distorted and not factual, according to the Bangkok Post.