Protesters on Sunday (29 November) marched to the 11th Infantry Regiment headquarters to raise questions about the transfer of army units to the direct command of the crown. 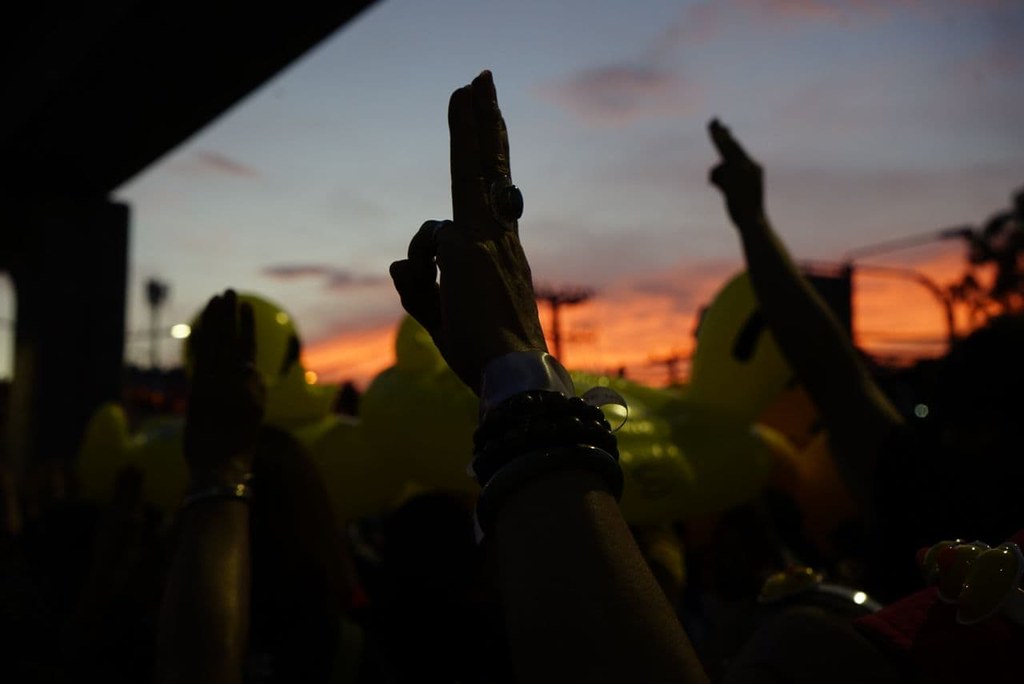 At 18.00, the protesters began marching from the Wat Phra Si Mahathat BTS Station in Bang Khen to the nearby 11th Infantry Regiment headquarters, led by a procession of protesters carrying yellow inflatable ducks, which have become somewhat of a symbol of the protest after they were used as makeshift shields against water cannon blasts during the protest in front of the parliament compound on 17 November. 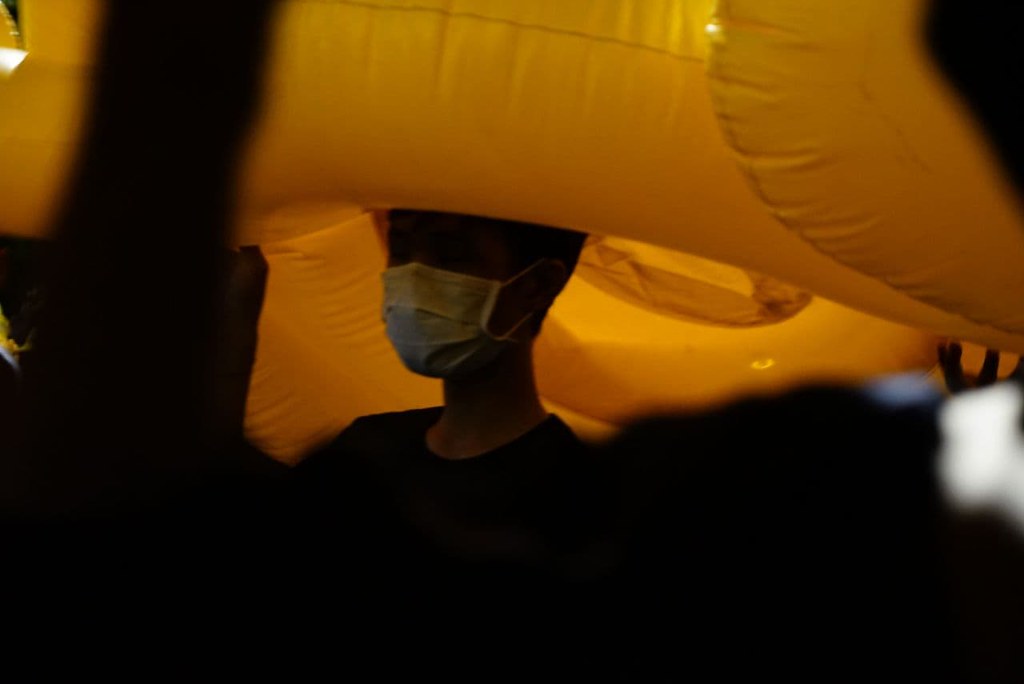 A protester carrying an inflatable rubber duck during the march

Also known as the King’s Close Bodyguard, the 11th Infantry Regiment was transferred along with the 1st Infantry Regiment, another king’s guard regiment, to the direct control of King Vajiralongkorn in October 2019. Both regiments were previously under the command of the Royal Thai Army and the Ministry of Defence. 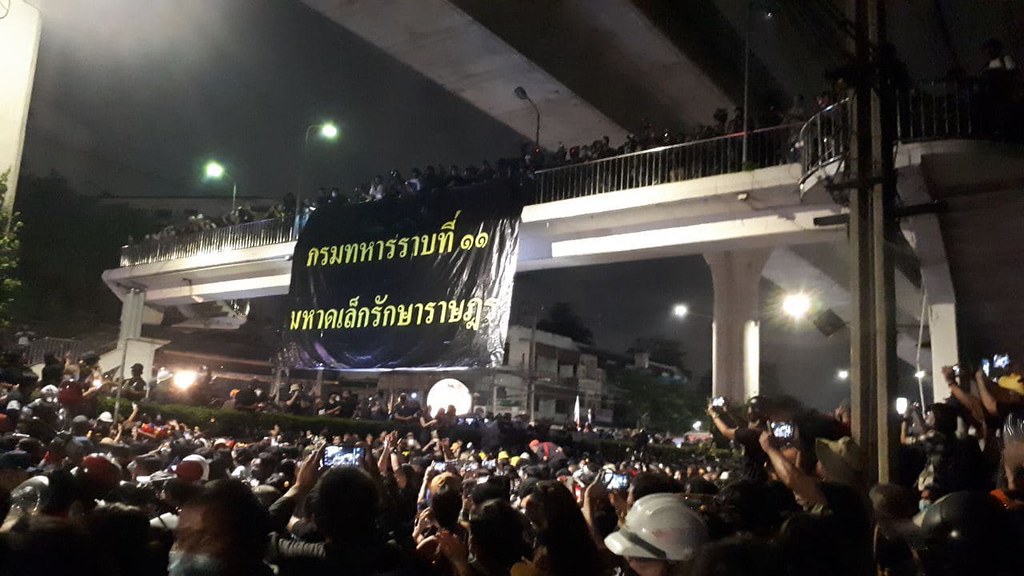 Protesters set up a stage on the street in front of the headquarters and took turns giving speeches. There was also a small stage set up in the protest area, which discussed the use of the lèse majesté law or Article 112, which carries a severe penalty, to silence critics of the monarchy, as well as the amount of budget allocated to the monarchy, while also saying that this amount of money could be used for other purposes, such as Covid-19 testing. 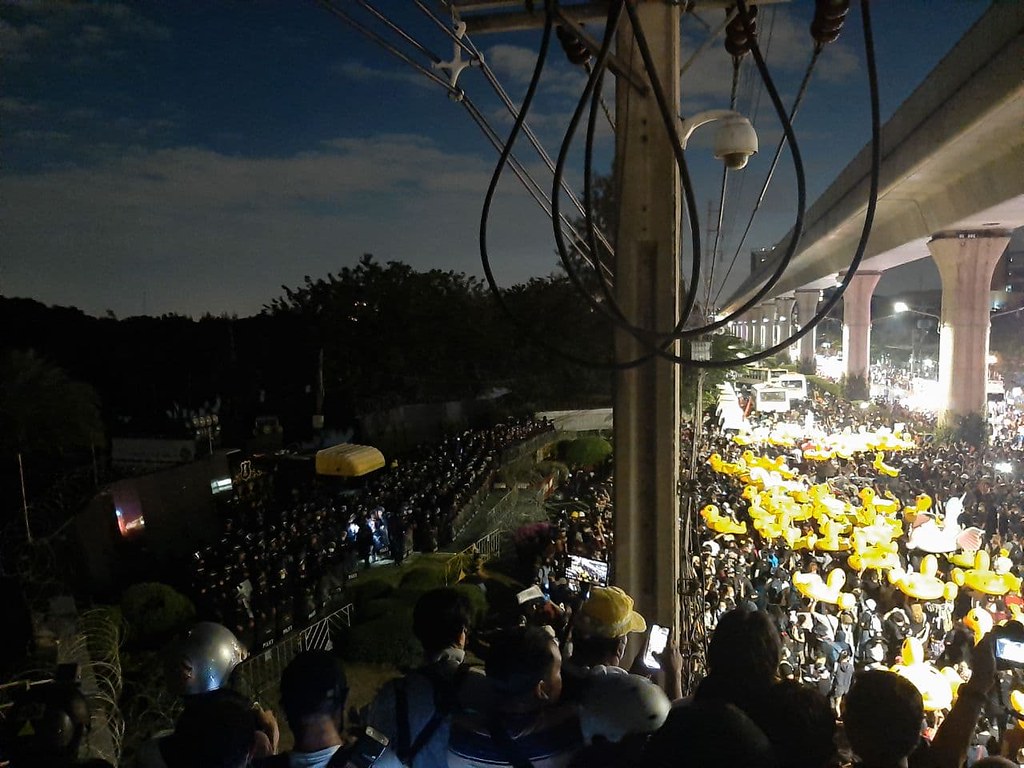 Protesters gathering on the street in front of the 11th Infantry Regiment headquarters, which were completely dark

At 20.40, the protest organizers read out a statement saying that it is unnecessary for the king to have control of army regiments, and that transferring army units to the direct command of the crown "not only severely undermines democracy but also destabilizes the stability and righteousness of the royal institution."

The statement also says that the king’s command of army units is an interference in the civilian government’s work and in the people’s sovereign power, and calls for the two regiments to be transferred back to their original chain of command and for the 2019 royal decree transferring the two Infantry Regiments to the Royal Security Command to be revoked.

One of the demands made in the 10-point manifesto declared by the student activist group United Front of Thammasat and Demonstration at a protest on 10 August was for the Royal Offices to be abolished and for units with a clear duty, such as the Royal Security Command, to be transferred and placed under other agencies.

Natthathida Meewangpla, a medical volunteer during the 2010 crackdowns on Red Shirt protests, also gave a speech during the protest about the case of the 6 people who were killed inside Wat Pathum Wanaram, which was designated a ‘sanctuary’ during the crackdown.

She said that the Red Shirt protesters were unarmed and were protesting peacefully, but they were met with violence, while those responsible are still getting away with the crime, and that people who were shot were not shot below the knees as the Centre for Resolution of Emergency Situation claimed, and that some were even shot in the head. For her, the Red Shirts were just protesting like the students are currently protesting, and she said that all the students have is inflatable ducks, but the authorities used water cannon blasts laced with chemicals against them.

Natthathida was a key witness during the Wat Pathum Wanaram case inquest hearings, during which she told the Court she saw military officers on the BTS tracks in front of the temple. She was later accused of being part of a plot to throw a hand grenade into the Bangkok Criminal Court on Ratchadapisek Road on 7 March 2015, and was also charged with royal defamation under Article 112.

She also said that she was violated while in the military camp, that she was blindfolded and carried into the camp, and that soldiers took off her shirt to look at her chest.

Natthathida then called on the protesters to take the red paint provided and pour it onto the ground in front of the entrance to the headquarters in a symbolic act of protest to call for justice for the people killed during the 2010 crackdown on the Red Shirt protests.

She also warned protesters not to throw the paint at the blockades or the police officers stationed in front of the entrance, and not to throw any object at the officers. 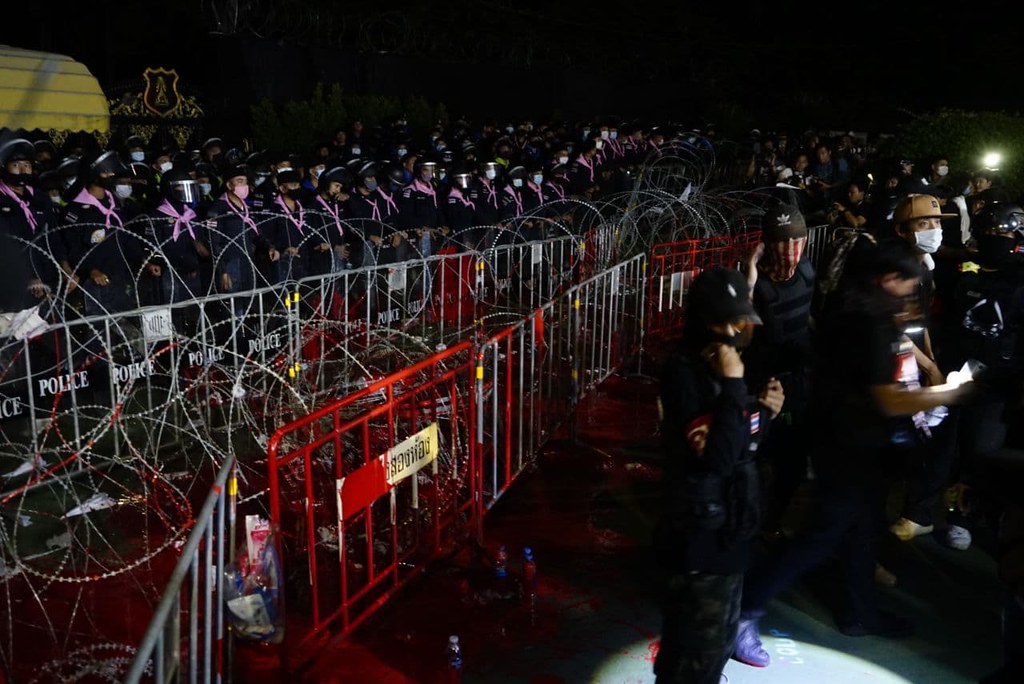 The protesters then stood still while making the three-finger ‘Hunger Games’ salute in memory of those killed during the 2010 crackdown, while the Red Shirt protest song “นักสู้ธุลีดิน” (Ashes of the Fighters) played from the speakers on the truck.

The protest concluded at 22.00. Parit then announced that the next protest will be at the Constitutional Court at 14.00 on 2 December, when the Court is scheduled to rule whether Prime Minister Gen Prayuth Chan-o-cha will be removed from office due to a complaint about him still staying in a military residence after retirement. 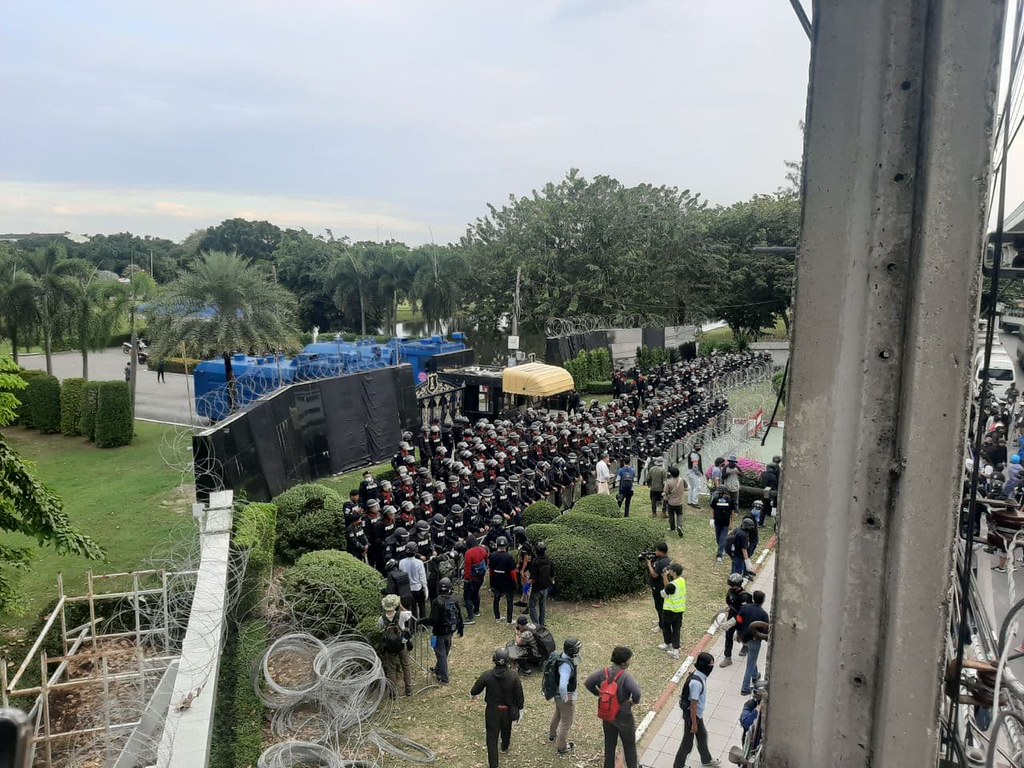 Prior to the protest, the authorities blocked the entrance to the 11th Infantry Regiment headquarters with buses, trucks, several police vans, and razor wire. A unit of police officers in full riot gear are also stationed in front of the gates.

At 16.20, protest guards moved the buses and the razor wire blocking the entrance. There was no reaction from the officers stationed there and the protest guards successfully cleared some of the blockade.

The protest was previously scheduled to take place at the 1st Infantry Regiment headquarters, but the organizers announced the change in location after the authorities blocked the streets with containers.