Protesters turn backs on royal motorcade during demonstration in Bangkok

Thousands of protesters gathering at the Democracy Monument turned their backs on a royal motorcade passing Ratchadamnoen Avenue during a demonstration on Saturday afternoon (14 November), where people gave speeches on various social issues and called for constitutional amendments. 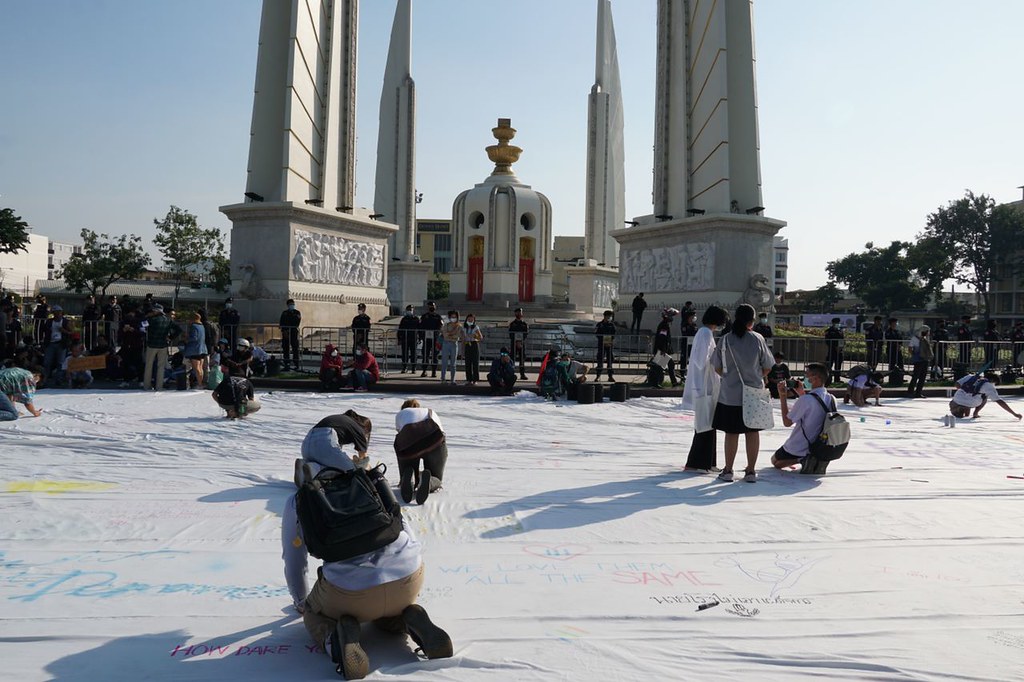 A large piece of white cloth was placed by the Democracy Monument for people to write their messages.

The protest, titled “Mob Fest,” took over one side of Ratchadamnoen Road between the Khok Wua Intersection and the Phan Fa Intersection. Various activist groups and civil society organisations set up tables and small stages to speak about different social issues, from gender equality to sex worker rights, human rights violations in prisons, abuse in schools, and state violence.

At 14.00, the high school student activist group Bad Student marched from the Ministry of Education to demand the resignation of Education Minister Nataphol Teepsuwan, who they said lacks the qualifications for his position and has so far ignored the students’ demands. They also carried a large piece of white cloth, which was later placed by the Democracy Monument for people to write down their wishes for the country’s future.

There were reports that the authorities had deployed an all-women unit of crowd control police during the march, and that the officers were lining up and walking alongside the protesters, as well as reports of water cannon trucks parked by the Ministry of Education and plainclothes officers taking pictures of protesters.

At 14.40, the group arrived at the Democracy Monument, where another group of protesters was already setting up for the event.

Police officers lined up in the middle of Ratchadamnoen Avenue, separating protesters from a crowd of men in yellow shirts, crowd control police, and plainclothes officers who arrived on the other side of the road ahead of King Vajiralongkorn and Queen Suthida’s motorcade, which was scheduled to pass through the area at around 17.00. 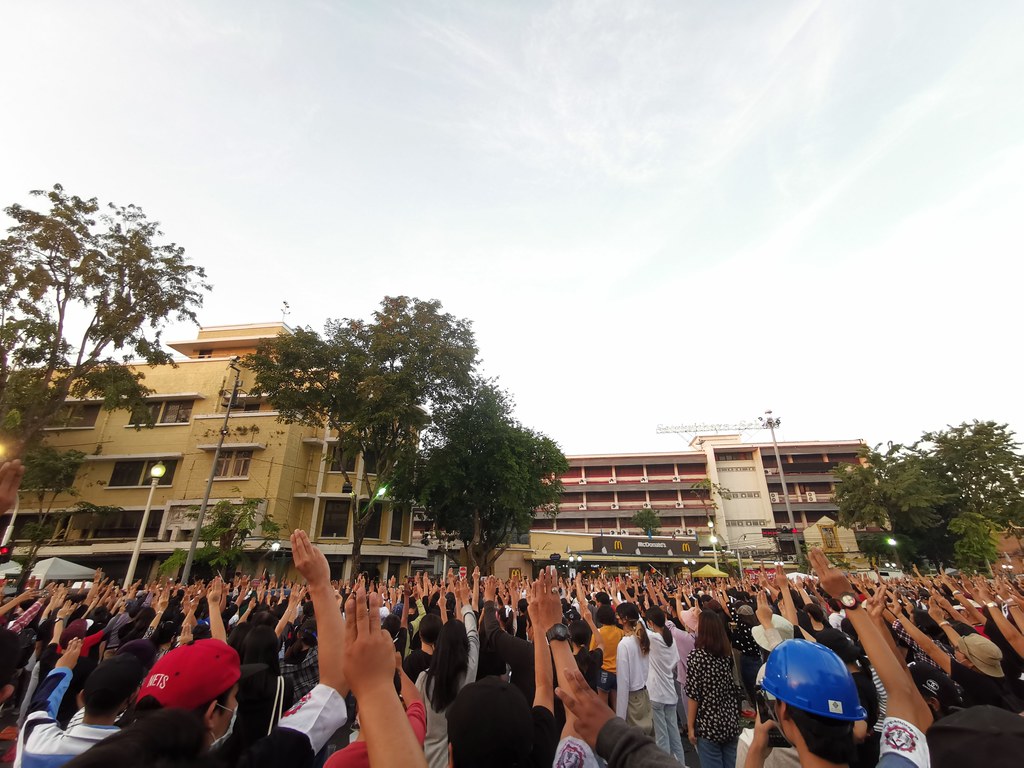 Protesters turning their back and holding their hands up in the three-finger 'Hunger Games' salute as the royal motorcade pass through Ratchadamneon Road.

At 16.20, representatives of the organizers on a truck parked by the Democracy Monument announced to the protesters that a royal motorcade will be passing by the protest and asked the protesters to stay calm and to turn their backs and hold their hands up in the three-finger ‘Hunger Games’ salute as the motorcade passed by. The announcement was repeated again at 17.25, while leaders of the Bad Student group asked the crowd around their truck to make sure that no one was holding up signs with inappropriate messages.

At 17.30, the royal motorcade drove by the Democracy Monument and along Ratchadamnoen Avenue. The protesters then turned their backs to the motorcade and held their hands up in the three-finger salute as asked, as the national anthem was played from the speakers on the truck.

After the motorcade has passed, they shouted “the nation is the people” and “Down with feudalism. Long live the people.” A group of protesters in front of the Satriwithaya School also shouted “People died here. Volunteers were shot dead at Wat Pathum.”

Protesters singing the national anthem while doing the three-finger salute as the royal motorcade pass by behind them.

At around 18.06, leaders of the Bad Student group announced that they will be taking back the Democracy Monument for the people. They then asked the protest guards and other protesters to help move the metal railing around the monument. Police officers lined up around the monument did not resist.

A small group then scaled the monument to wrap the white cloth, now covered in messages from protesters, around the monument, while a Thai version of “Do You Hear the People Sing?” played from a nearby truck and protesters around the base of the monument turned on the flash lights on their mobile phones. 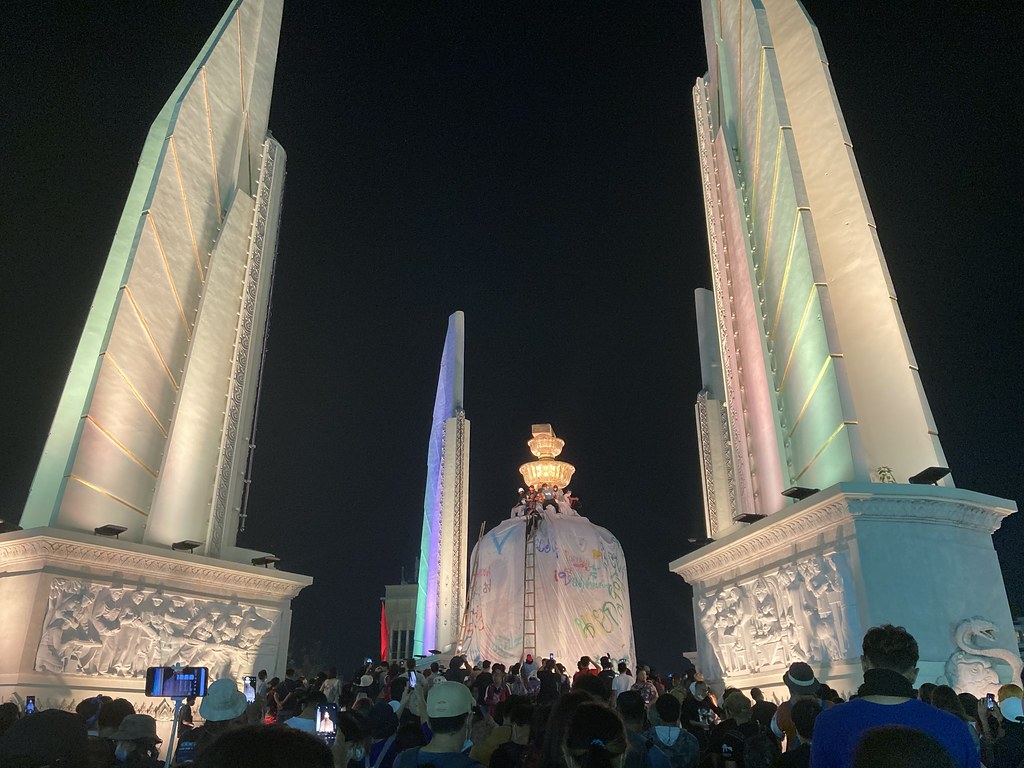 A small group of volunteers climbed the Democracy Monument and wrapped it in the piece of white cloth covered in messages from protesters.

During the protest, representatives of various groups took turns giving speeches on various social and political issues on both stages, with performances from several bands in-between the speeches. The Women for Freedom and Democracy Group, which announced during the protest that the group’s name is being changed to Feminists for Freedom and Democracy, also set up a stage by the Democracy Monument, where speakers gave speeches on gender-based violence, LGBTQ rights, and abortion rights. 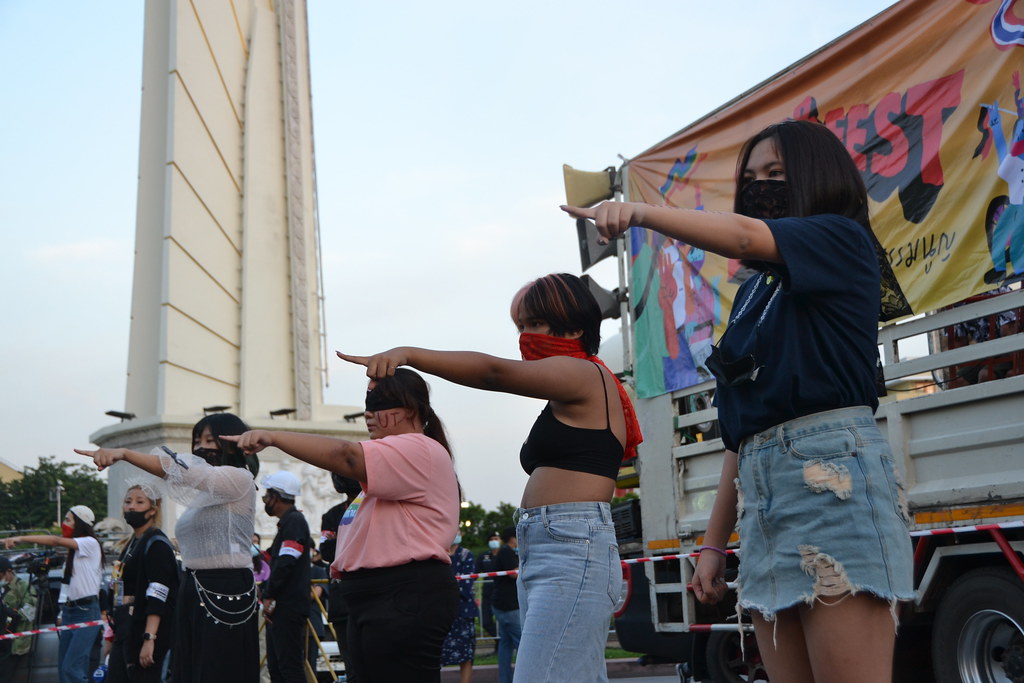 The People’s Right Party also read a statement calling for the establishment of a Constitution Drafting Assembly of Thailand, in order for the new constitution to be drafted through a democratic mechanism with the participation of every sector of the society.

The group made six demands:

The protest concluded at around 1.30, when protesters took down the cloth wrapped around the Democracy Monument.

The 7 proposed drafts of constitutional amendments, including the version referred to as ‘the people’s draft,’ which was proposed by iLaw and co-signed by over 100,000 members of the public, are scheduled to go before parliament on Tuesday (17 November).

The iLaw draft proposes to amend Chapters 1 (General Provisions) and 2 (the Monarchy) of the constitution, which may open the way to monarchy reform.

The student activist group Free Youth has announced on their Facebook page that there will be a protest at the parliament building from 15.00 onwards on Tuesday until parliament accepts the draft of the constitutional amendment proposed by the people.