The Thai authorities have issued an order under the Emergency Decree for the National Broadcasting and Telecommunications Commission (NBTC) and the Ministry of Digital Economy and Society (DES) to investigate and possibly suspend four online media outlets: Voice TV, Prachatai, The Reporters, and The Standard, as well as the Facebook page of the student activist group Free Youth, for their coverage of the recent protests in Thailand. 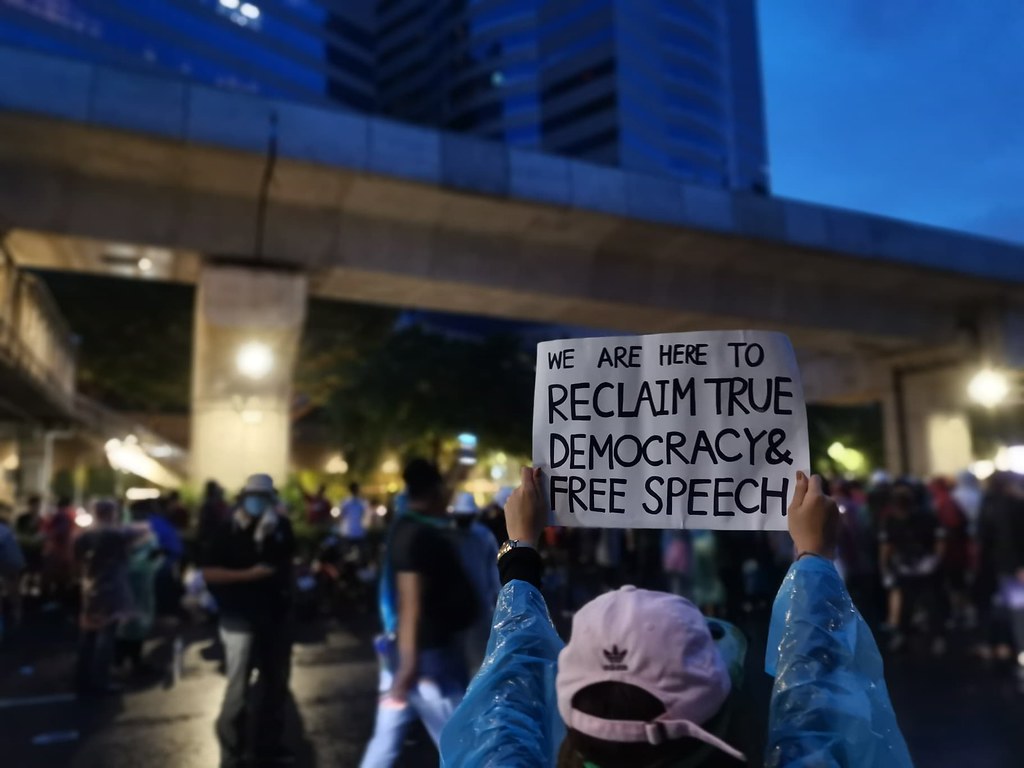 A protester at the Lad Phroa Intersection held up a sign saying "we are here to reclaim true democracy & free speech."

The order, dated 16 October 2020, was issued by police chief Pol Gen Suwat Chaengyodsuk, who was appointed the chief official in the severe state of emergency, and states that “it appears that there was a broadcasting of content that affects state security, peace and order, or the good morals of the people”, and that the NBTC and the DES have been ordered to investigate and to stop the broadcasting or order the removal of such content.

However, as of 9.50 on 19 October, the order had yet to be published on the Royal Gazette website.

The Reporters reported at 10.40 today (19 October) that DES Minister Puttipong Punnakanta confirmed that there was an order for the Ministry to investigate the four media outlets and the Free Youth Facebook page.

Puttipong also said that he has tasked the DES Permanent Secretary with pressing charges against social media users who have broken the law between 14 – 18 October 2020, and that the DES is investigating at least 300,000 URLs.

At 12.36, The Reporters reported again that DES Deputy Permanent Secretary Putchapong Nodthaisong said that the Ministry has already requested a court warrant and is ready to shut down any media outlet that violates the Emergency Decree if it receives an order. He also said that the Ministry may request to check an outlet’s equipment, suspend it, or confiscate its equipment, but whether a journalist reporting the content in question would also face charges has to be decided based on the journalist’s intention.

However, assistant national police chief Pol Lt Gen Jaruwat Waisaya told the Reporters that the order to investigate the media outlets mentioned above is not currently enforced, but that the police have asked the NBTC and the DES to investigate some of the content published by Voice TV, Prachatai, The Reporters, The Standard, and Free Youth’s Facebook page, as there was a complaint that these outlets published content that affected national security, peace and order, or the good morals of the people. He claimed that the authorities are not trying to obstruct press freedom or shutting down media outlets, but are only notifying relevant agencies to investigate information that could violate the Emergency Decree.

The Foreign Correspondents’ Club of Thailand (FCCT) issued a statement this morning (19 October) expressing concern about the order to investigate the media outlets and the threat to suspend these outlets.

“A free media is an essential element in any democratic society, and bona fide journalists should be allowed to report important developments without the threat of bans, suspensions, censorship or prosecution hanging over them,” says the statement, which also criticized the use of national security as a justification for such threat as “overly broad, and can easily be abused to silence reporting that is accurate but makes the government uncomfortable.”

The statement also says that such move is “likely to be ineffective and counterproductive in an age of social media” and that “it makes the government appear heavy-handed and unresponsive to criticism, and could stir up even more public anger.

“The professional membership of the FCCT urges the Thai authorities to reconsider censorship of media reporting, and drop the threats made against these particular media organisations,” concludes the statement.

The editorial board of Thai Enquirer, another Thai online media outlet, also issued a statement saying that “instead of dialogue, opening up discussion and press, the government has chosen to embrace its authoritarian roots and censor, shutdown, and intimidate journalists working to present the news” and called on the authorities to “rescind the gag order immediately and to engage in dialogue with the press, the opposition and the people.”