The 16 October police crackdown has not deterred the people’s will to express their anti-dictatorship ideas and criticisms of the monarchy. They turned from single protests to mobile leaderless ones.

Protesters could be seen at many BTS skytrain stations on the afternoon of 17 October in line with the strategy after the 16 October crackdown posted by the United Front of Thammasat and Demonstration, the Thammasat University student group protest organizers. The message stated ‘Everyone is a leader’.

In response, at 13.30, the police held a press conference warning against protests which obstructed transportation routes. The BTS skytrain stations were ordered closed from Ari to Phromphong from 14.30 onward. Phayathai Station on the Airport Link was closed, As were 4 access points to the Victory Monument. All access to Asok intersection were also blocked.

Most police resources seem to have been deployed at the Victory Monument.  But no protestors turned up.

However, all BTS skytrain stations and MRT subway stations were closed by the authorities as protesters started gathering. 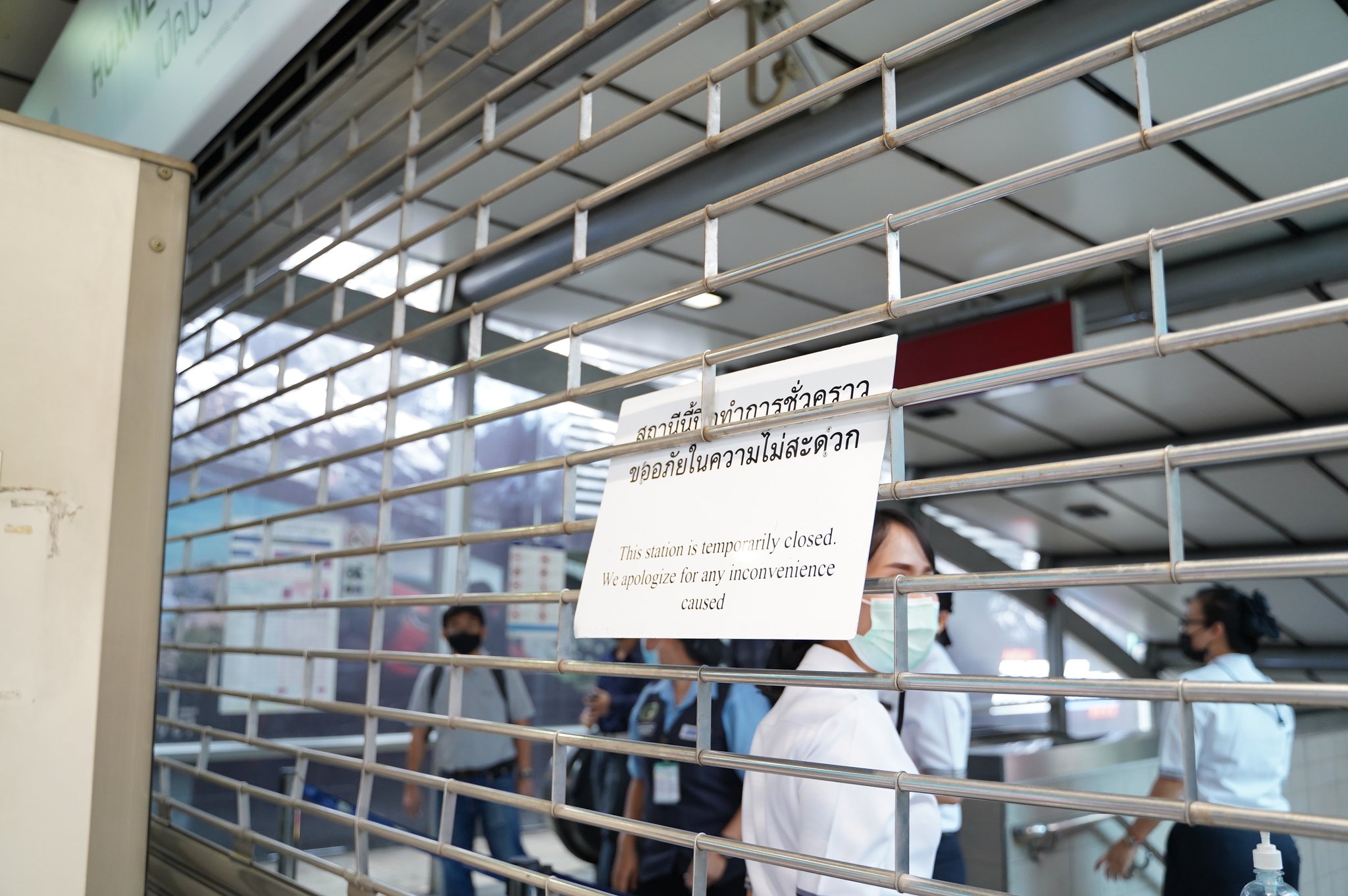 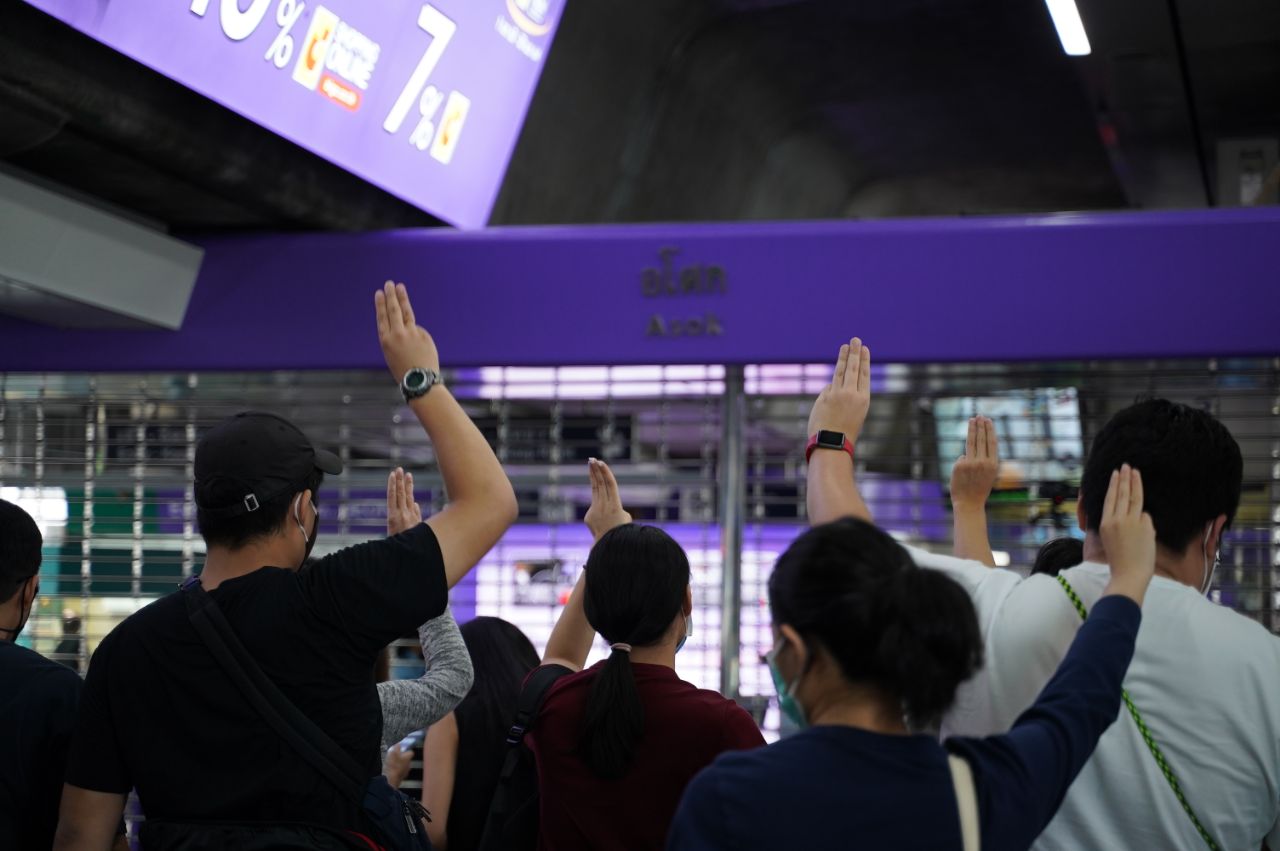 A closed MRT station and people who raised 3 fingers at the BTS gate.

Closing skytrain and subway stations was a tactic which the authorities hoped would discourage protesters who, over the last several days, had demonstrated against the government, calling for constitutional amendments, respect for human rights and monarchy reform.

Nevertheless, people started gathering at many spots. At Asok station, protesters handed out sheets of papers for signs to be written on. Protesters gave anti-government speeches: release our friends, release our children. Some said they were going to Lad Phrao intersection. 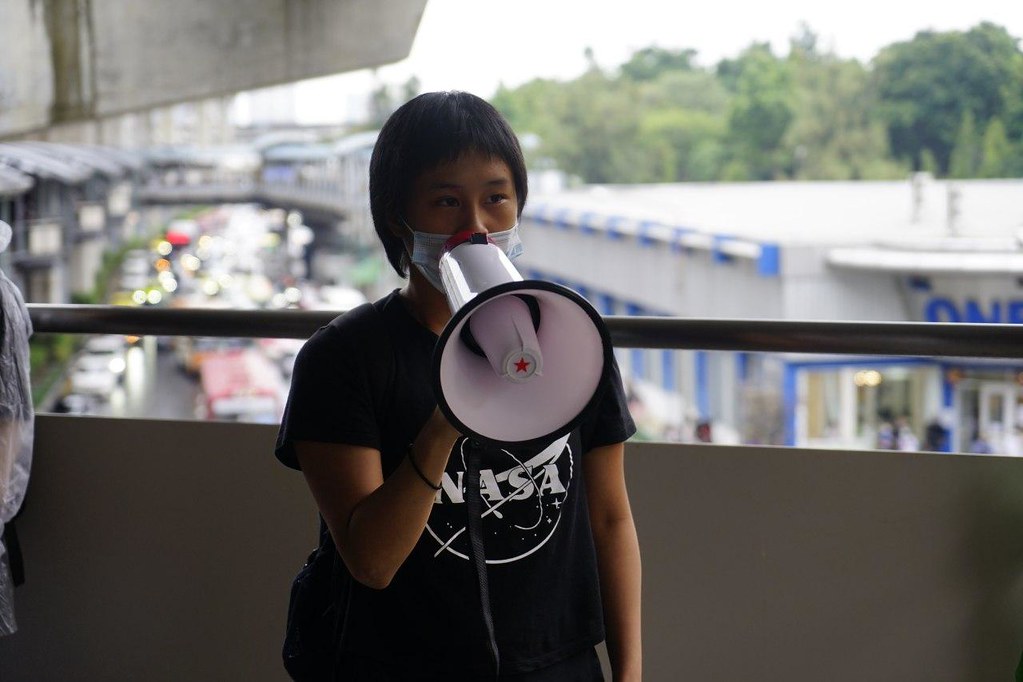 People sharing their experience regarding the 16 October crackdown. Some said they had to take care of another protesters who cannot go back home as their family hate what the protests are calling for.

At 15.35, at Lad Phrao intersection, people came down from the platform to the street in front of Central Plaza Lad Phrao and gradually took over the interesection.

An additional gathering point was at Samyan Mitrtown shopping mall, opposite Chulalongkorn University, announced by the Spring Movement, an activist group of CU students. Protesters exchanged their experience of the previous night’s crackdown. 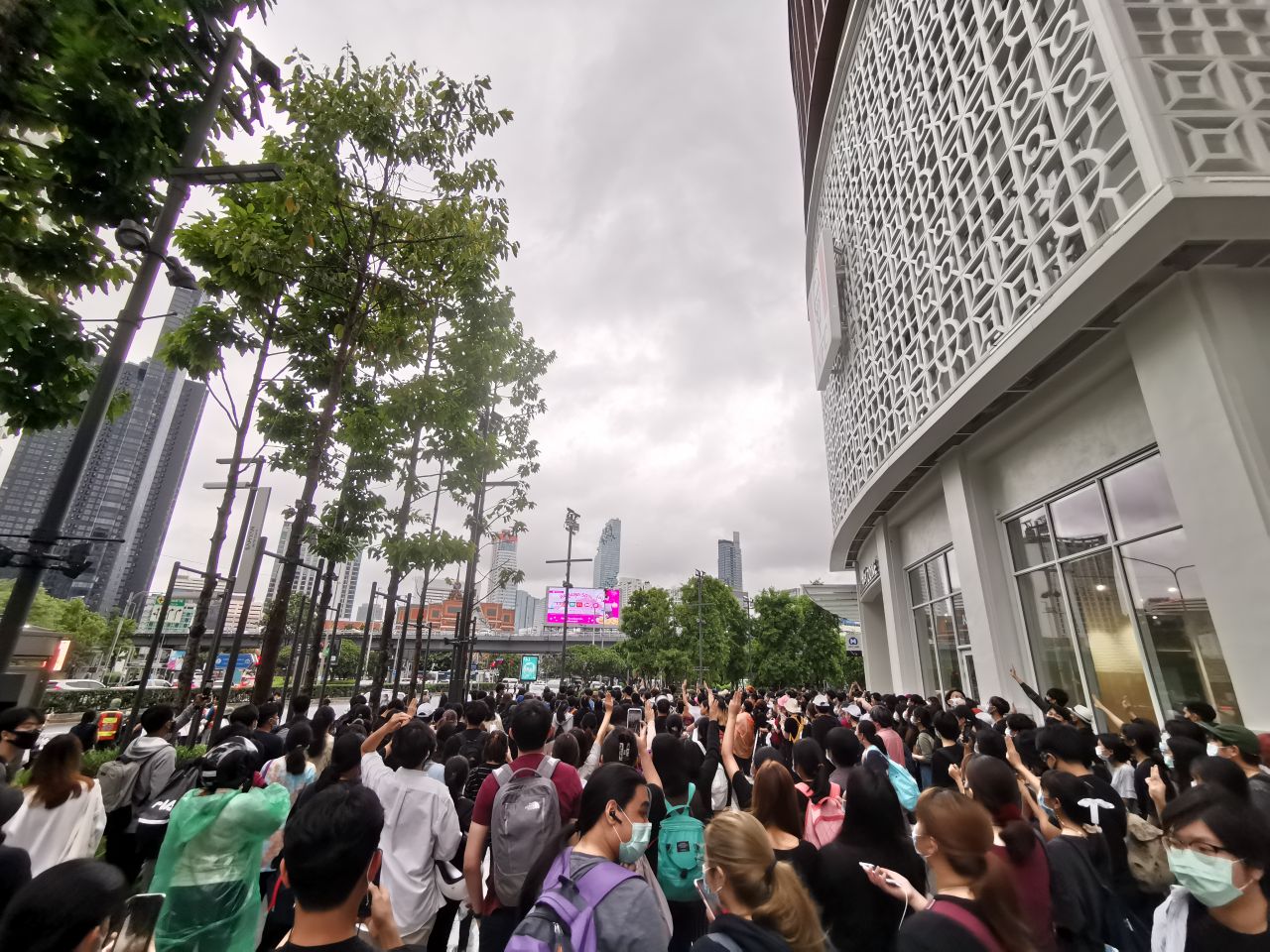 "There is no more staying neutral, either you side with democracy or side with dictatorship that uses power unfairly," said a protester. Another protester also called for a boycott of graduation ceremonies presided over by members of the royal family in order to change the cultural structure.

The mall announced that it would close at 17.00 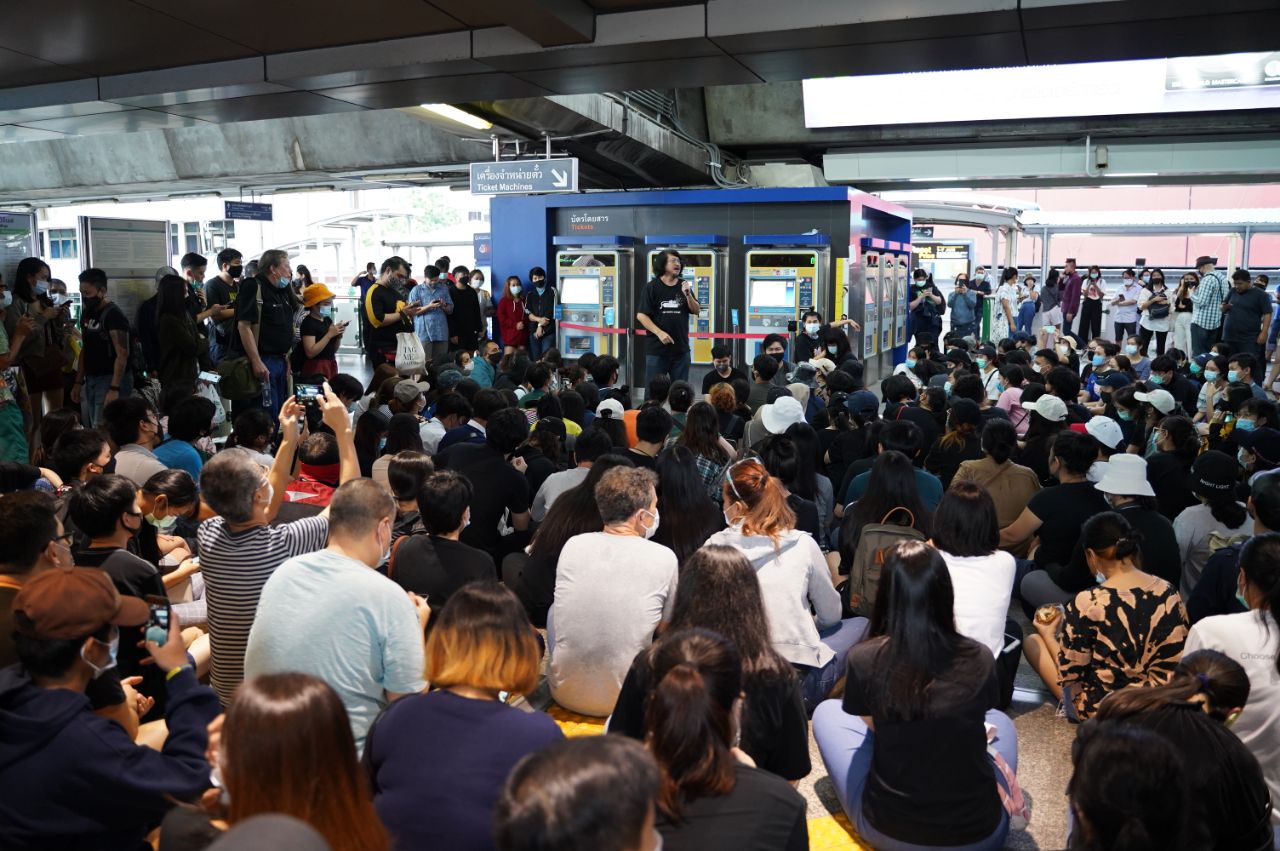 Standing in the centre: Sombat Boonngam-anong giving a speech.

At 16.35, activist Sombat Boonngam-anong gave a speech along with other people on the Asok station skywalk as they could not go anywhere else due to the transportation shutdown. There was also a protest at Ramkamhaeng University. 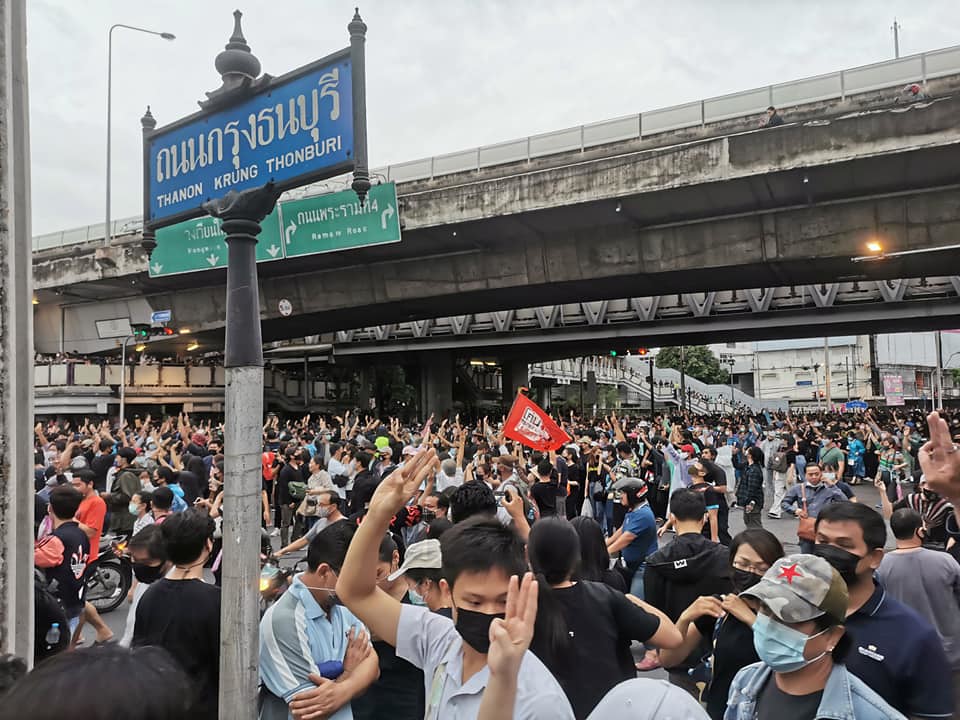 At Wongwian Yai, protesters asked "Who killed King Taksin?"  King Taksin ruled in the Thonburi era and died in mysterious circumstances that allowed King Rama I of the current Chakri dynasty to come to power.

Thonburi, the former capital, is where the protesters were standing.  An equestrian statue of Kong Taksin is situated at Wongwian Yai.

At 16.40 at the Lad Phrao intersection, occupying protesters organized a guard and arranged barriers in preparation for a potential crackdown. Some came prepared with masks and helmets. 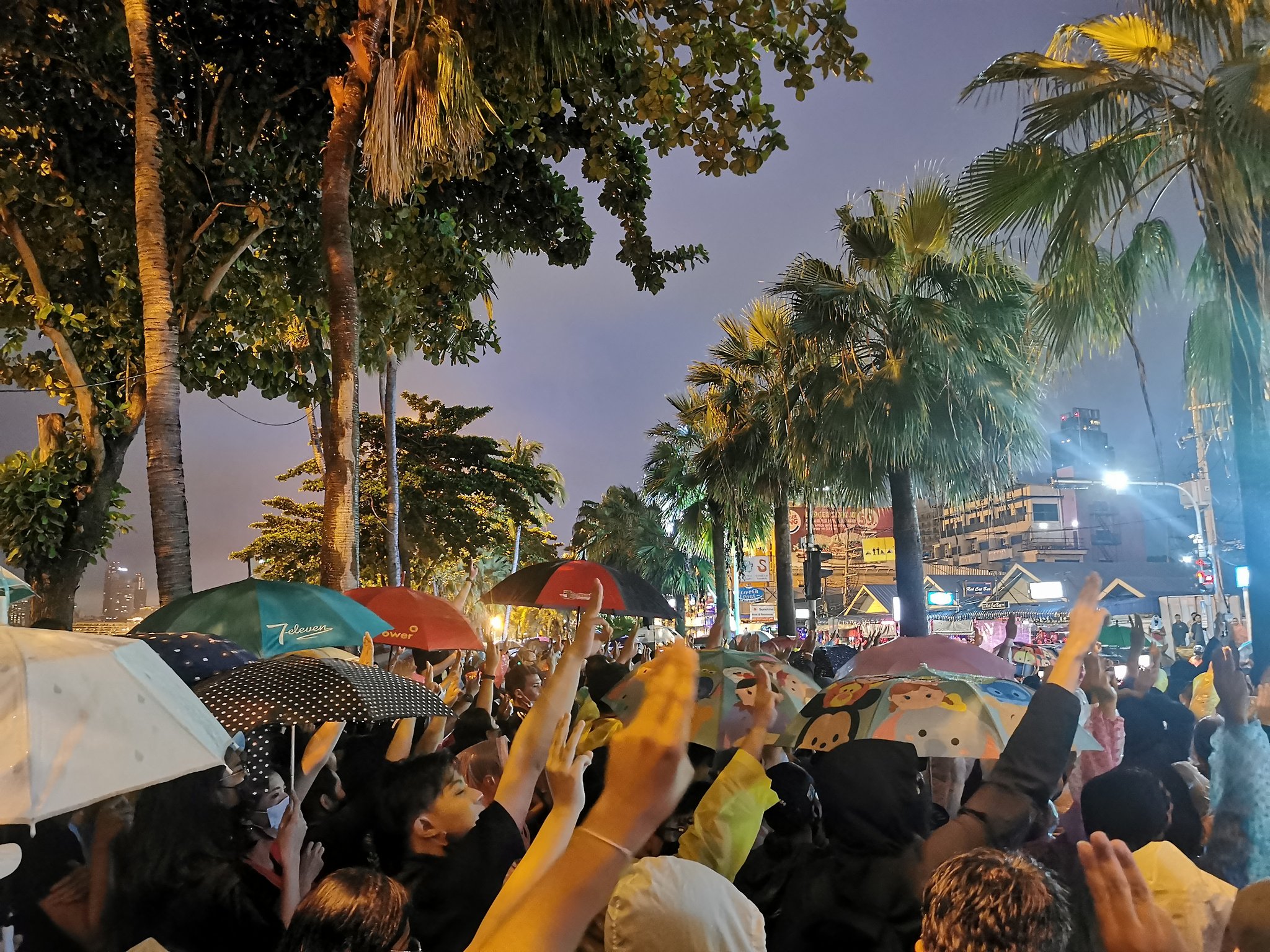 At 18.00, protesters at the various locations gave the 3-finger salute while singing the National Anthem. Raising 3 fingers during the National Anthem has become a regular protest action as one peaceful way to fight against dictatorship proposed by Parit 'Penguin' Chiwarak, a student activist who is now in police custody. 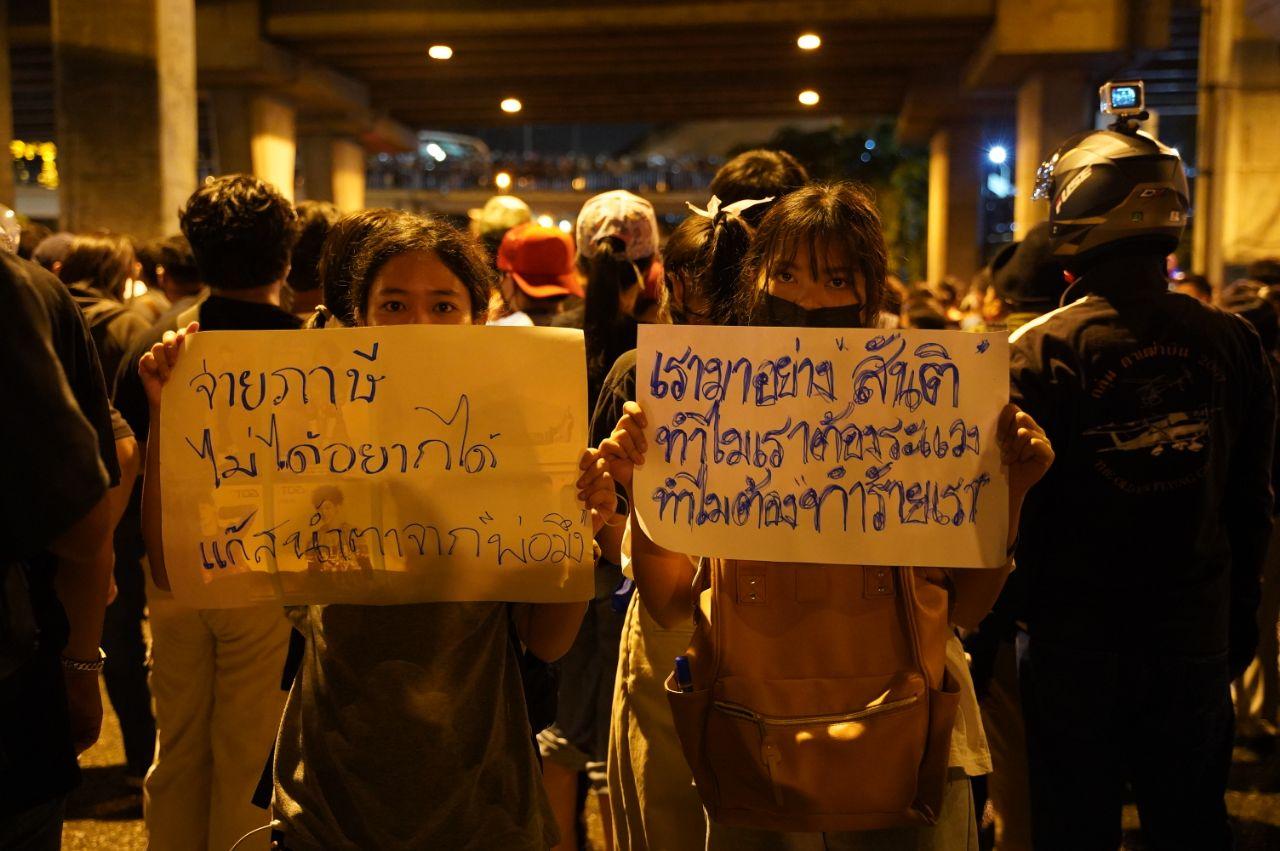 Left to Right: "[I] pay taxes. [I] don't want tear gas from your father & We come peacefully. Why do we have to be cautious? Why must [you] hurt us?

The protests went on with no reports of any clashes or crackdowns. They one by one, the protests separately dissolved at around 18.45-19.45.

The anti-dictatorship protesters have come up with an even more mobile mindset than the day before. On 16 October, they changed the protest site to Pathumwan after the police heavily deployed forces to occupy Ratchaprasong intersection, the original protest venue. 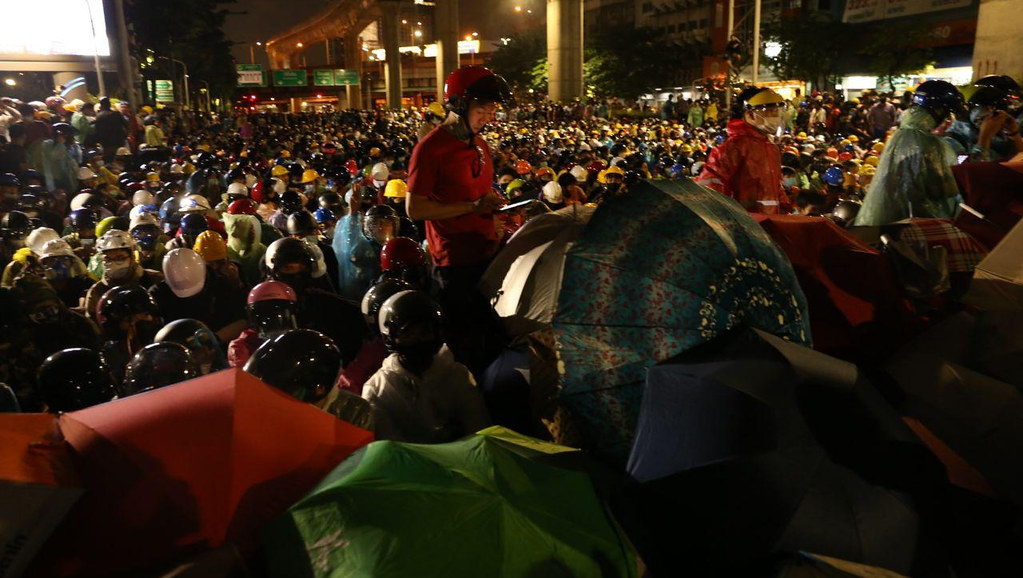 But because it was only a few hundred yards from the original spot, it did not take long for riot control forces to redeploy and disperse the protesters with high pressure water cannon, riot shields, batons and water mixed with a chemical irritant.

The protest raised the political temperature as new state of emergency was announced after the overnight protest on 14 October. This ‘severe’ emergency decree covers Bangkok and is aimed at quelling the ongoing protests which the government can now call unlawful, claiming that they endanger public safety. 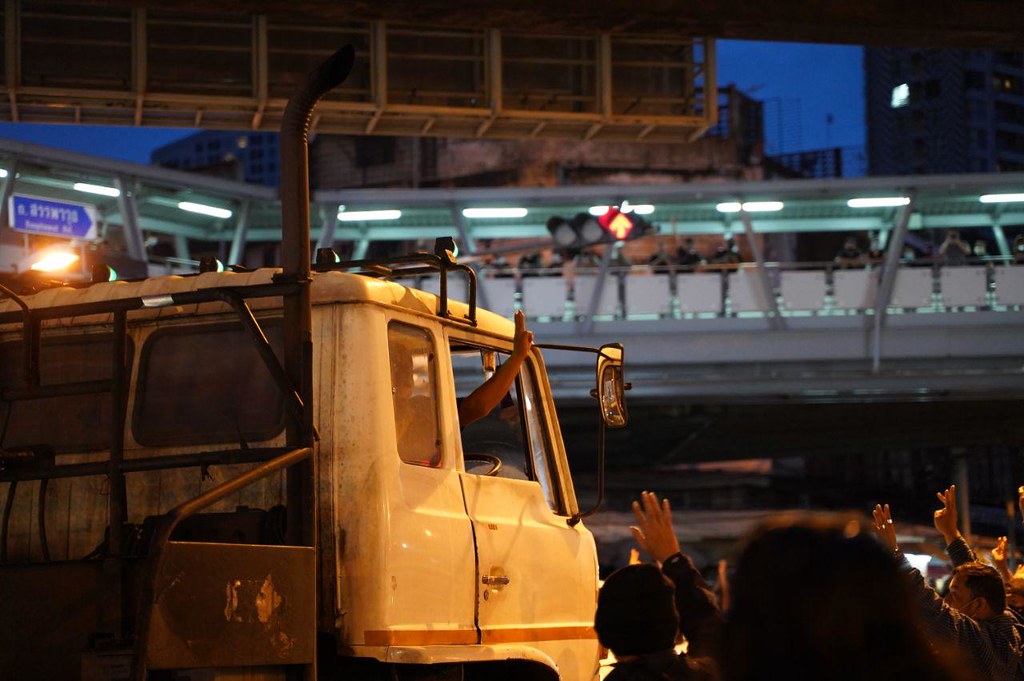 The new emergency decree prohibits the gathering of more than 5 people, enables detention for 7 days without charge, authorizes high-ranking police officers to conducts searches without court orders and prohibits people and the media from publishing or broadcasting information which threatens stability.

On 17 October, Pol Maj Gen Yingyot Thepchamnong, deputy spokesperson of the Thai National Police, said during a press briefing that political gatherings violate the emergency decree. The police have to respond according to the law. As the protesters have adjusted their tactics, the police will have to change their tactics too.