A man claiming to be a police officer visited the home of Chettha Klindee, a Mahasarakham University (MSU) student activist, without showing any identity documents. He threatened his family to make him delete a Facebook post taken from an official source. The health of his already sickening grandmother has worsened. 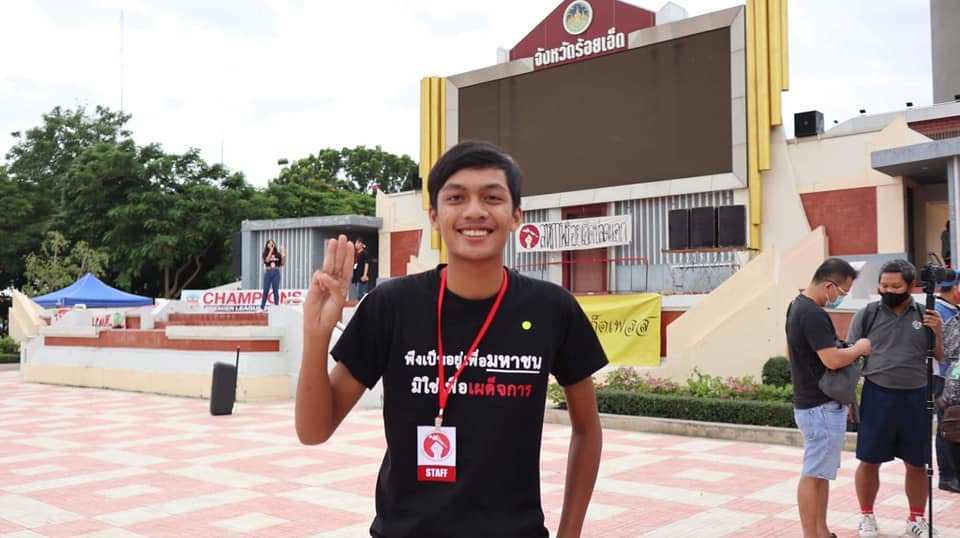 The Thai Lawyers for Human Rights (TLHR) reported that the visit took place on 5 September. A man wearing a flak jacket with the Thai national flag on the chest went to his home in Surin Province while his grandmother was there. After a short talk, she called Chettha’s father to speak to him.

The man showed Chettha's Facebook post, alleging that he had violated the monarchy. The man also demanded that Chettha stop talking about the monarchy otherwise he would find him and prosecute him. The man also took a photo of Chettha’s father before leaving.

Chettha shared a news report from The Standard about the Royal Gazette announcement restoring all official titles of Sineenat Wongvajirapakdi, the Royal Consort. The visit caused him confusion as the news is official and he did not add any caption.

According to his father, the man did not show any identity documents. Chettha’s father asked a relative who works as a police officer in Surin Police Station but did not get any confirmation of any police deployment from there. It is likely that the man is not from the Surin station.

Chettha said his 70-year-old grandmother could not sleep on the night after the visit. She was ill the following morning; as she already has many illnesses, his uncle had to take her to the doctor. Chettha tried to explain to her that he did not share anything illegal. However, not knowing about Facebook, she still did not understand very well.

Chettha is a College of Politics and Governance (COPAG) student at MSU. He is a member of the MSU Student Front for Democracy, a student activist group that has taken part in organizing many anti-government protests at MSU and in other provinces.

According to the TLHR, he was visited in a similar manner on 24 June in order to convince him not to hold a  commemoration of the 88th anniversary of the 1932 democratic revolution at Surin provincial hall. 3 policemen and the village chief warned him that any illegal act would be prosecuted. The village chief also referred to the 6 October 1976 massacre at Thammasat University in a threatening manner.

The organizing members were concerned about that visit and decided to cancel the event.

Pro-democracy activists and protesters have faced many reprisals by agents of the state, alleging violations of the Emergency Decree, the sedition law and traffic and cleanliness-related laws. Informal harassment like visiting families and schools to deter people from expressing their political opinions has also been reported.

Since the implementation of the Emergency Decree on 26 March 2020, at least 63 people in 20 cases have been charged related to political expression. At least 14 people have been summoned, and some have been arrested after participating in the mass protest on 18 July.