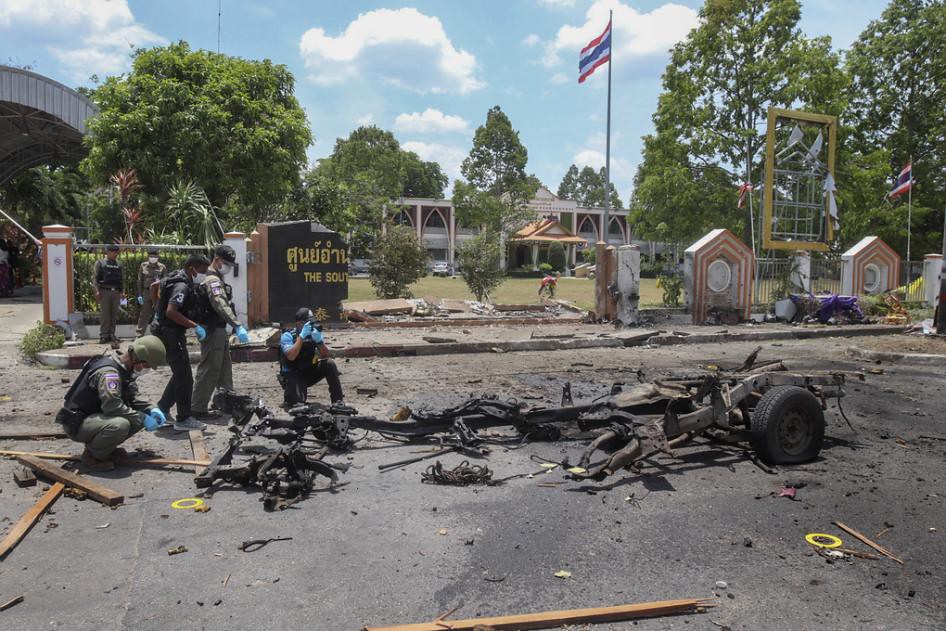 The Southern Border Provinces Administrative Centre (SBPAC) in Yala after the attack. The Centre's sign has been blown off. (Source: Human Rights Watch)

The bombing took place on Tuesday morning, when a small bomb detonated in front of the SBPAC as a meeting on the COVID-19 outbreak was taking place inside the Centre, attended by governors, public health officials, journalists, and police officers.

The first explosion caused no casualties but immediately drew onlookers and security personnel to the scene. The second, larger bomb hidden in a nearby pickup truck then detonated, injuring at least 25 people and damaging the administrative buildings and nearby parked vehicles.

The OHCHR statement said that, according to local sources, most of the injured were civilians, and among them were at least 10 women.

“A ‘double-tap’ bombing outside a government building has no aim but to cause the greatest loss of human life,” said Brad Adams, HRW’s Asia director. “In carrying out this attack during a meeting to address COVID-19, separatist insurgents have again demonstrated cruel disregard for the lives of all civilians.”

The HRW statement said that this is the first time the SBPAC, “an inter-governmental agency that coordinates civilian affairs, public administration, and humanitarian work” in the Deep South, has been attacked, and that the attack “appeared to be a response to a dialogue between the Thai government moderate BRN leaders in early March to establish the foundation for a peace process. Radical separatist elements considered the dialogue a tacit departure from the BRN’s goal to liberate Pattani, Yala, Narathiwat, and Songkhla provinces from the Thai state.”

HRW noted that international humanitarian law protects civilians and civilian structures from attack, and that deliberate or indiscriminate attacks on civilians are considered war crimes.  “Government agencies not participating in military operations are civilian objects, and not subject to attack under the laws of war,” said the statement.

HRW also expressed concerns about the “violations of international human rights law and the laws of war by Thai government security forces and militias.” The statement said that murder, torture, and enforced disappearances “cannot be justified as reprisals for insurgent attacks” and that the situation “has been reinforced by an entrenched culture of impunity for human rights violations by officials” in the Deep South, as no officials have yet to be prosecuted for human rights abuse.

“The Thai government should thoroughly investigate the attack on the SBPAC and bring all those responsible to justice in compliance with human rights law,” Adams said. “As long as Thai security forces are shielded from criminal responsibility and long-held grievances in the ethnic Malay Muslim community are ignored, the insurgents will use the situation to try to justify unlawful attacks.”

Meanwhile the OHCHR also issued a statement condemning the attack. “The indiscriminate use of weapons targeting civilians is prohibited under international customary law and carrying out such attacks during a public health emergency is unconscionable,” said Cynthia Veliko, Regional Representative of the UN Human Rights Office in Bangkok. “We condemn this attack in the strongest terms and urge full respect for international legal obligations.”