Around a hundred people gathered in front of the Bangkok Art and Culture Centre (BACC) yesterday (13 February) for a candlelight vigil to mourn the victims of the Nakhon Ratchasima mass shooting, which took place on Saturday night and Sunday morning (8-9February), and to demand that Gen Apirat Kongsompong take responsibility by resigning from his position as army chief. 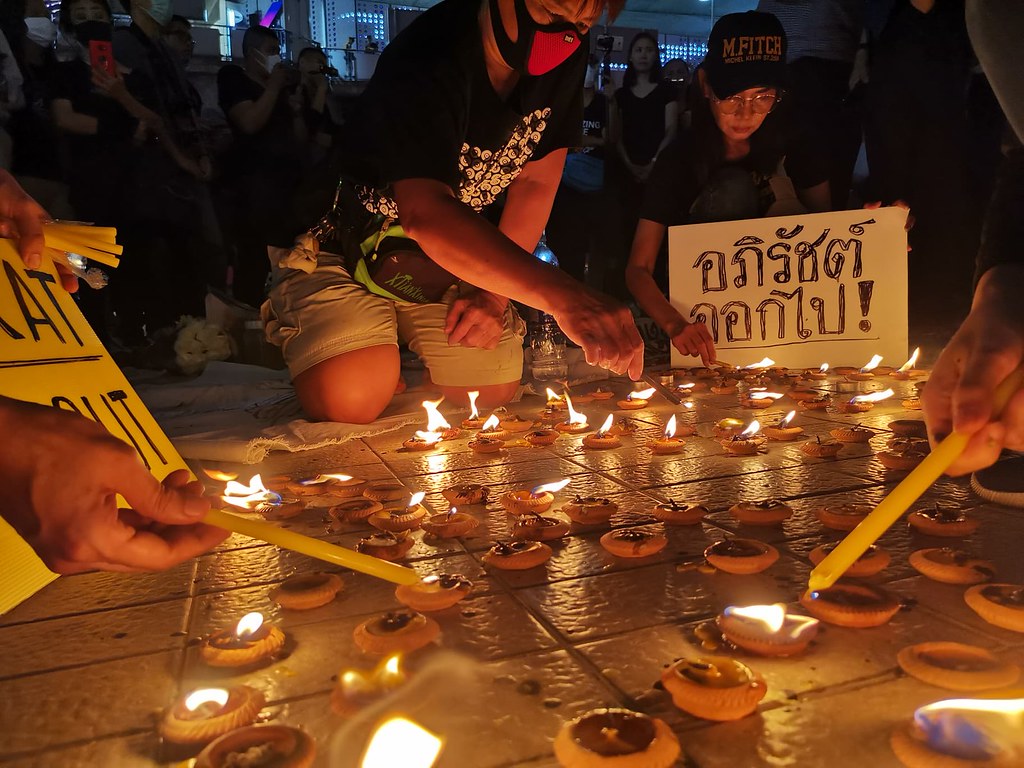 Candles were lit at yesterday's vigil. The person in the back is holding a sign saying "Apirat get out"

The vigil was organized by the Democracy Restoration group (DRG) and the People’s Party for Freedom. Flowers and candles were placed in front of the BACC, along with a blank piece of cloth on which people wrote messages of condolence. 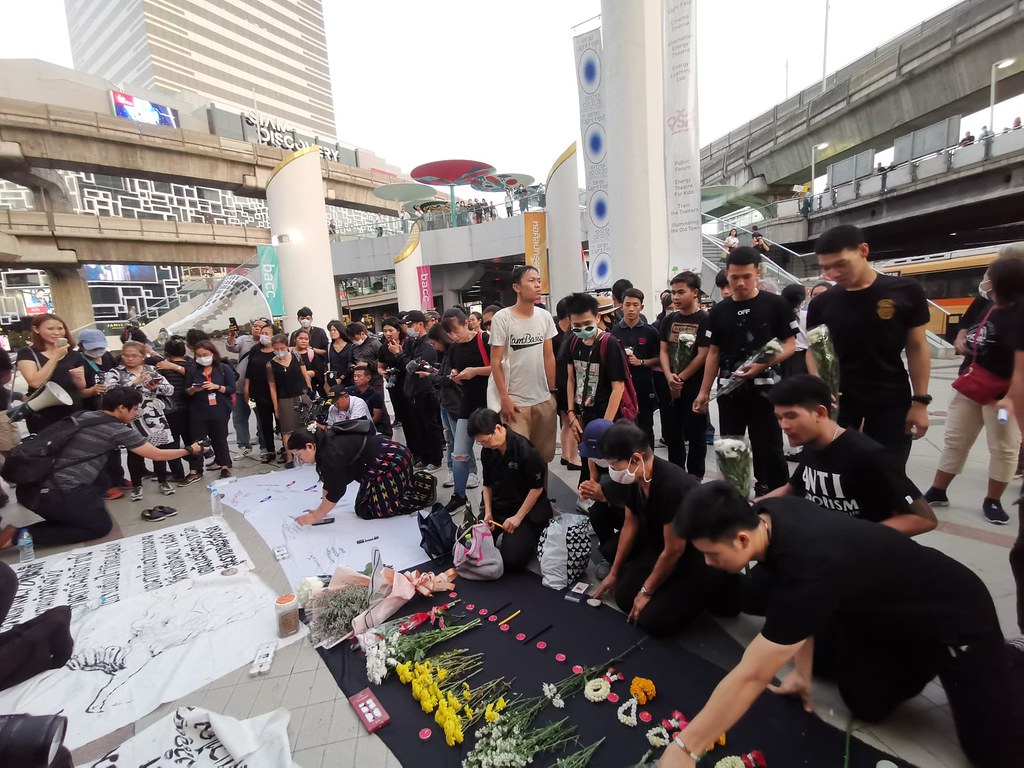 The organizers asked the participants to stand in a minute of silence and to join them in lighting candles in memory of the victims.

The group also read out a statement, which called for the army to take responsibility for the attack and for Gen Apirat to resign.

“We express our deepest condolences for the families and friends of those who lost their lives, and we send our support to the injured. We also would like to acknowledge the work of medical personnel, security personnel, police officers, several news agencies, as well as others who are involved, who joined forces and tried their best to stop the attack and limit the losses,” said the statement.

“The atrocity that happened not only brought sadness to all Thai people, but also raised concerns, as we cannot tell whether a similar incident will happen again, and who will be the next victims, as the army, which is involved with the attack in many aspects, has not shown that it recognizes its structural issues and failures, especially in how they store high calibre weapons, and has not shown that it will make changes to prevent such problems and failures from happening again in the future.” 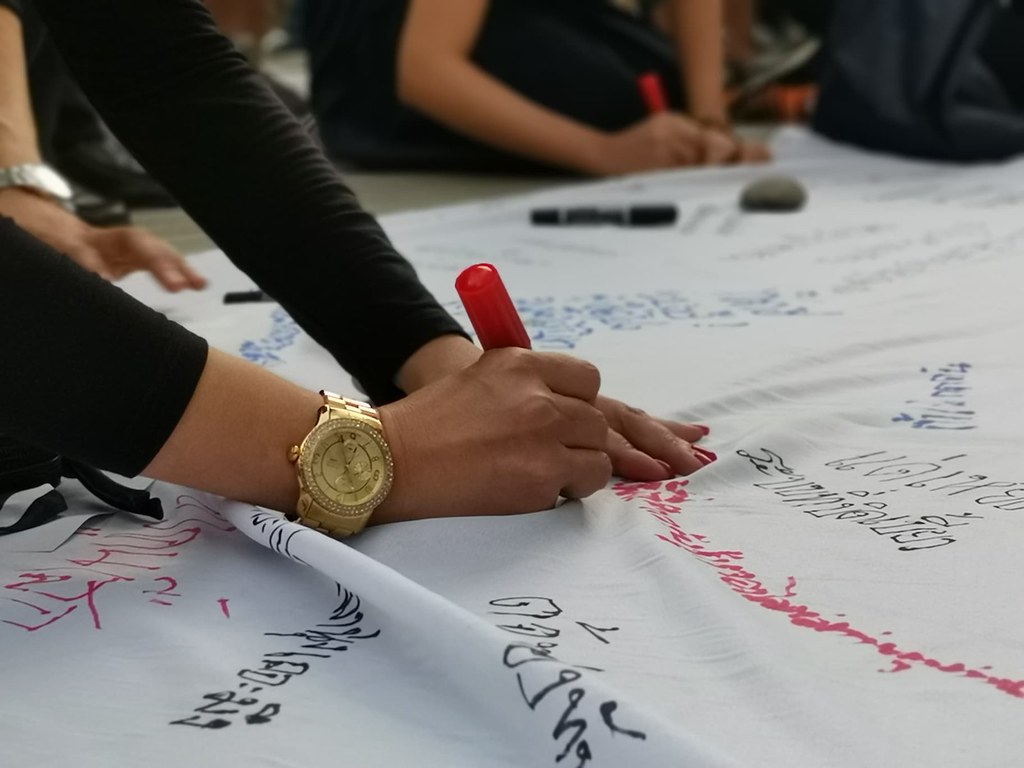 Messages of condolences were left on a piece of white clothes by those who took part in the vigil.

The statement then went onto say that the attack has its roots in the problem of businesses inside the military and the use of state land, as well as abuses of power by commanding officers. It also said that the attack shows that security at military bases and armouries is lacking, as the gunman was able to take several weapons from the armoury before going on his shooting spree.

“Even then, Gen Apirat Kongsompong, the army chief, the highest commanding officer in the army, still said that it was a personal problem that is unrelated to the army. This shows that this army chief not only lacks the ability to ensure there are no failings within the organization, but when such failings lead to a tragedy, he is also not capable to understand these issues from all aspects. We therefore demand that Gen Apirat Kongsompong resign from his position as the army chief to show his responsibility for the aforementioned failings.” 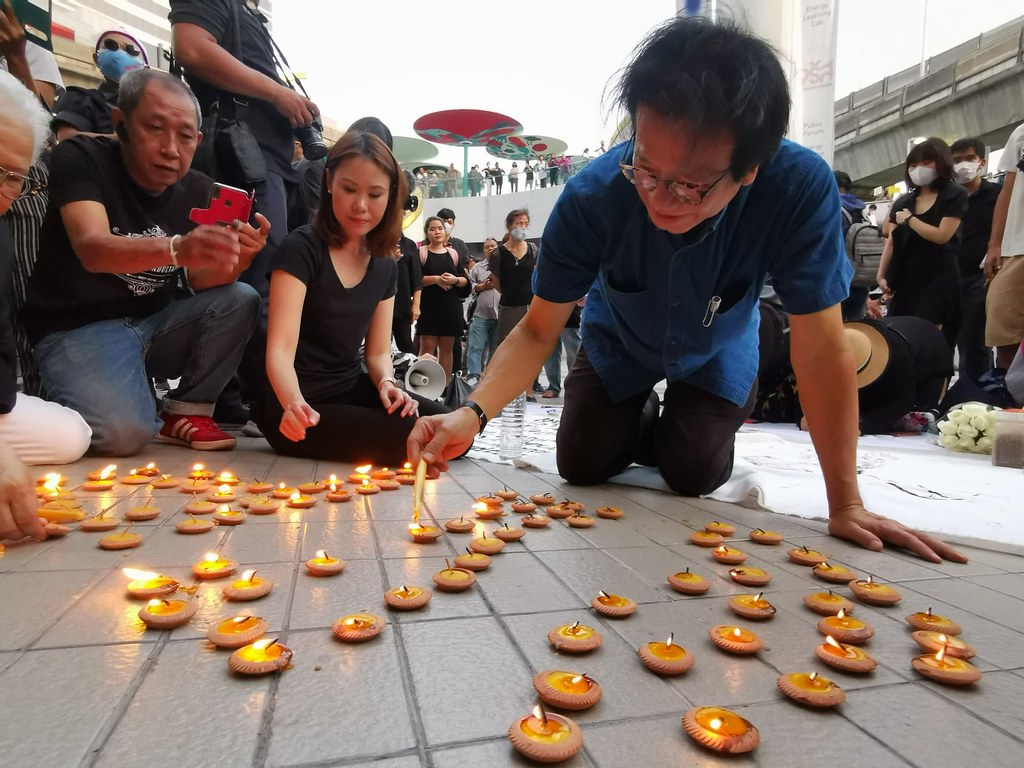 DRG, the People’s Party for Freedom, along with representatives from the Student Federation of Thailand, also went to parliament yesterday afternoon (13 February) to submit a request to the Standing Committee on the Armed Forces to investigate management issues within the army which has led to conflict of interest, abuse of power by commanding officers, and inefficiency in weapon storage.