On 23 May, the Constitutional Court ruled to suspend Thanathorn Juangroongruangkit’s MP status after accepting the Election Commission’s request to consider disqualifying him for holding shares in a media company.

Thanathorn Juangroongruangkit, 40, leader of Future Forward Party, denied the allegations saying that he transferred the stakes on 8 January, long before he registered to be a MP candidate on February 6. Thanathorn Juangroongruangkit in the news conference

“I would like to say that I, the leader of Future Forward Party, and 79 other MPs, still have not given up hope,” said Thanathorn. “Even though today I was suspended from acting as an MP by the decision of the Constitutional Court, I am still an MP, pending the Court’s verdict. I will continue to work with the people. When they refuse to let me enter Parliament, I will stand with the people as someone who has earned the trust of 6 million and 3 hundred thousand people nationwide.”

After the suspension, #StandwithThanathorn topped twitter trending in Thailand.

Even though his MP status is suspended, he was allowed by the Parliament secretary to attend the opening ceremony on 24 May. King Vajiralongkorn presided over and gave the opening speech.

Under the 2007 constitution enforced after the coup in 2006, 9 Constitutional Court judges were appointed by King Rama IX on the recommendation of the Senate. Of the 150 senators at the time, 73 were appointed and 77 were elected. Even though their tenure is limited to one 9-year term, 4 of the judges were replaced under the 2007 constitution between 2013 and 2015, 3 as a result of retirement (at 70 years old) and 1 due to resignation.

The remaining 5 should have left the bench after they completed their 9-year terms in 2017, but the National Assembly—all members of which were appointed by the NCPO after the coup in 2014 – prolonged their tenure until the 2017 Constitution and the organic laws came into effect. With the 2017 Constitution in place, the term of office is shortened to one 7-year term and the age of retirement is 60.

However, the provisions of the new constitution were not applied to the Constitutional Court judges. So 5 of them, appointed in 2008, were allowed to remain until an elected parliament starts a selection process. The other 4, who were appointed between 2013 and 2015, were also allowed to stay until a retirement age of 70 under the 2007 constitution. 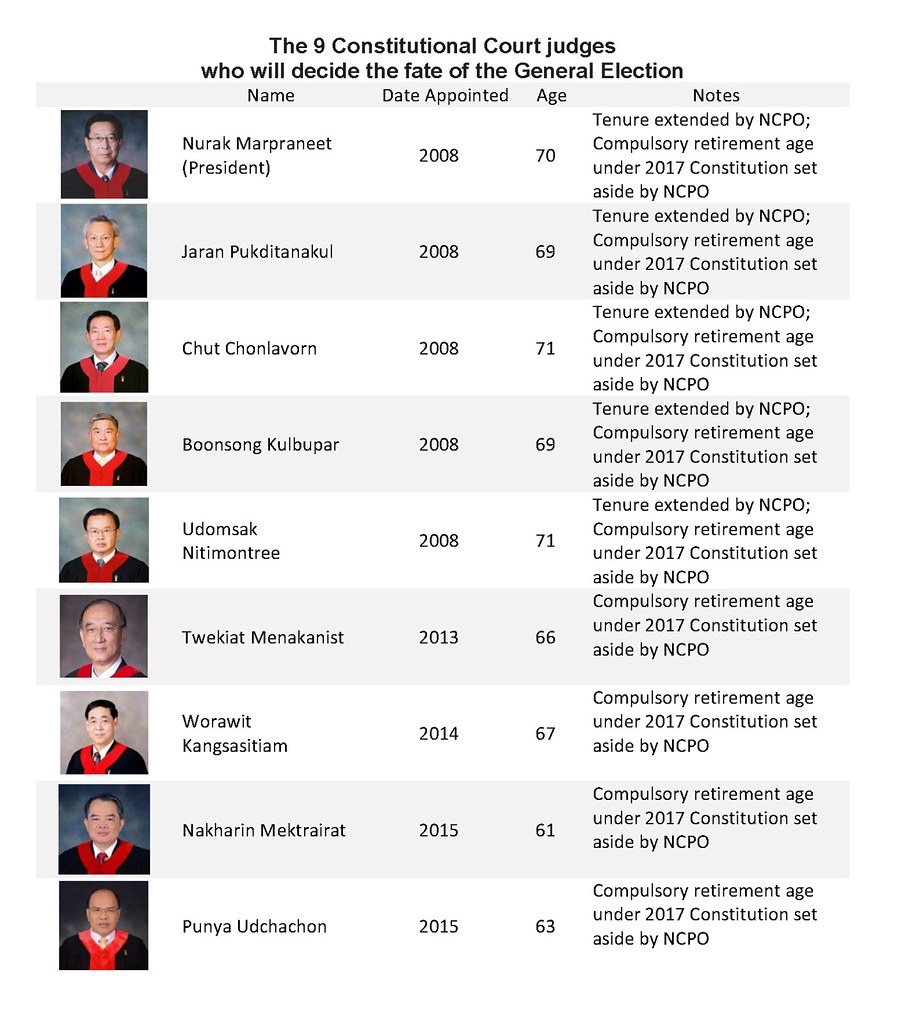 In other words, all the current judges were appointed with the approval of a semi-democratic or undemocratic legislature. In 2018, the National Assembly also increased their salaries along with those for other independent bodies. The President of the Constitutional Court got an increase from 125,590 baht to 138,090 baht per month and the other judges got an increase from 115,740 to 131,920 baht. The judges are bound by royalist culture as they have to swear an oath of loyalty to the King. Since its establishment in 1997, no woman has ever been appointed as a member of the Constitutional Court.