Poonsuk Poonsukchareon, a human rights lawyer, made 5 observations on the authority of the agency which made the announcement, the inconsistency in the enforcement of laws in the locality and the principle of proportionality in ISOC Region 4’s declaration of Bang Khao and Tha Kamcham Subdistricts, Nong Chik District, Pattani Province as a temporary special control zone.

2 rangers were killed and 4 others injured in an ambush while returning to their base in Nong Chik District, Pattani Province on 11 September.  Later, on 16 September, Lt. Gen. Piyawat Nakvanich, 4th Army Commander and Director of ISOC Region 4, held a press conference at the 46th Military Circle.  ISOC Region 4 Forward Command Announcement No. 86/2018 declared Ban Khao and Tha Kamcham Subdistricts, Nong Chik District, Pattani Province, as a temporary special control zone, under the authority of the 1914 Martial Law. All residents in the area were to bring all guns, bullets, cars, motorcycles and boats to the military for examination from 17 – 23 September 2018 at the Nong Chik District Office. 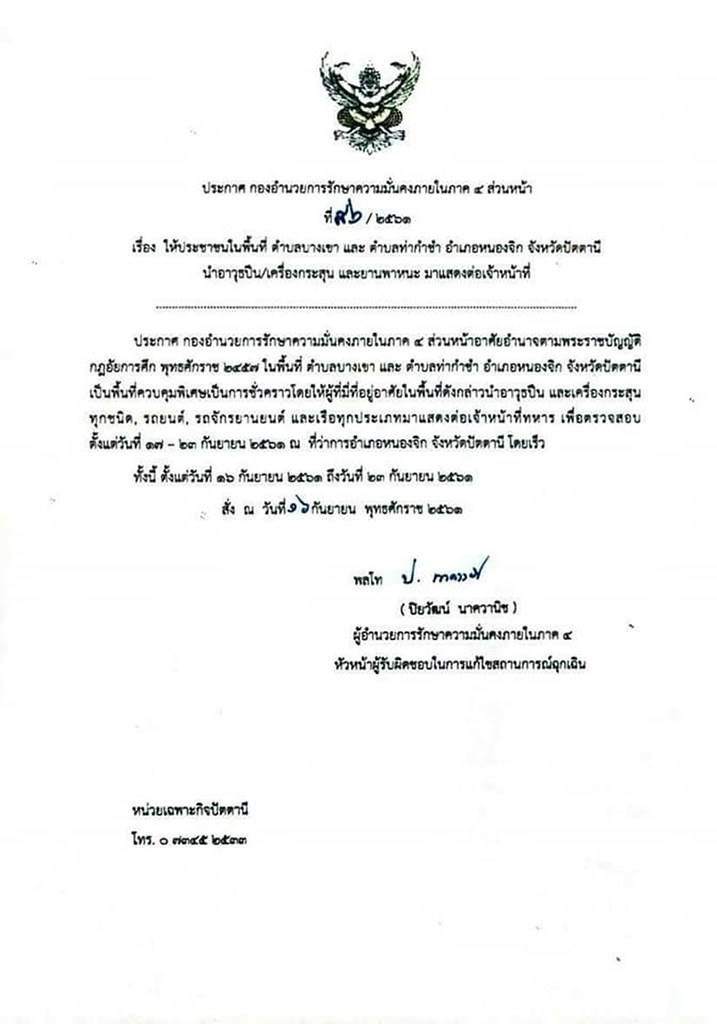 On 20 September 18, Poonsuk Poonsukchareon, a human rights lawyer, made 5 observations on the ISOC Announcement.

“The issue of violence in the southern border provinces is complicated and has multiple dimensions. The use of authority under security laws began in 2004 when martial law was enforced, followed by the Emergency Decree on Public Administration in a State of Emergency in 2005 and the Internal Security Act in 2008. In this area, apart from having no results and seeing no end to the problem, it is in fact found that the judicial process and law enforcement has had an effect on people and further complicated the solution to the problem. Only a judicial process that respects the right to fair trial and the principle of the rule of law will be one of the paths leading to peace,” Poonsuk concluded.