Home » Role of Singapore and ASEAN in the Trump-Kim D?tente

Role of Singapore and ASEAN in the Trump-Kim D?tente

Submitted on Thu, 10 May 2018 - 06:18 PM
Pavin Chachavalpongpun
The inter-Korean summit is set to transform the international political landscape of East Asia. For the first time, South and North Koreas have agreed to overcome long years of mutual antagonism. They expressed their willingness to tackle difficult issues in their relationship that had over several decades prevented peace on the Korean peninsula.
Among those difficult issues are denuclearization of the region and even a possible reunification in the future. The two countries were separated by the Korean War, which terminated in 1953. The two countries’ leaders, North Korea’s Kim Jong-un and South Korea’s Moon Jae-in, seen shaking hands at the demilitarized zone were rare images in everyone’s recent memory.
Southeast Asia reacted to the latest development on the Korean peninsula with vindication and curiosity. At first, this year’s ASEAN chair, Singapore, hailed the outcome of the inter-Korean summit. Singapore President Lee Hsien Loong praised the efforts of the Koreans to alleviate tensions and work toward a peaceful resolution of the situation facing Seoul and Pyongyang.
ASEAN also released its statement in which its leaders congratulated the two countries’ effort to pursue peace and denuclearization of the Korean peninsula. This agreement will pave the way for North Korea’s Kim to visit China and ultimately to meet with US President Donald Trump. Both China and the United States have played a crucial role in guaranteeing peace and stability in this part of the world.
For years, ASEAN had attempted to locate itself at the driver’s seat in resolving regional conflicts, including that on the Korean peninsula. Through the ASEAN Regional Forum (ARF), ASEAN provided a platform for North Korea to discuss the nuclear issue with parties concerned. ASEAN often called for North Korea to refrain from further nuclear and missiles tests—a call that has been ignored until now.
In the past, ASEAN encouraged the United States, China, Russia and Japan to actively participate in the Six-Party Talks designed to find a peaceful resolution to the security concerns as a result of the North Korean nuclear weapons program. ASEAN saw itself as a neutral party, which could gain trust from all sides of the conflict. Yet, ASEAN has never succeeded in influencing the decision of North Korea, mainly because the organization lacked enforcing mechanisms to deal with Pyongyang.
Despite lacking in ASEAN’s direct intervention, last week’s inter-Korean summit allowed the organization to vindicate its persistent support for peace on the Korean peninsula. As an immediate step, ASEAN is now embarking on renewing its endeavour to ensure the fulfilment of the agreement between the two Koreas. It is evident that ASEAN is keen to play a part in the next US-North Korea summit.
The competition between some ASEAN nations to host such summit was noticeably intense. Thailand, still under the military rule, was desperate to be recognized as an active member of ASEAN. More importantly, the military government hoped that by hosting the US-North Korea summit, its regime would in return be legitimized by the world community.
Thai Foreign Minister Don Pramudwinai told the media that Thailand was ready to facilitate and host the talks. Bangkok was among possible locations for the Trump-Kim summit, which are Geneva, Helsinki, Singapore, Stockholm, Oslo, Prague, Warsaw and Ulaanbaatar.
The Thai military government was quick to grasp such opportunity, arguing that it has been as historic US ally and also has diplomatic relations with North Korea. It is true that Thailand has no diplomatic mission in Pyongyang. But North Korea has its embassy in Bangkok, which has made dialogues between Pyongyang and the rest of ASEAN nations possible.
The Thai diplomatic activism over the US-North Korea Summit was further confirmed following a recent trip to the United States of the Thai Deputy Prime Minister and Minister of Defence General Prawit Wongsuwan. Prawit went on to impress his counterpart, US Defence Secretary James Mattis, by promising to buy more military equipment from the United States.
However, Thailand was not chosen by the United States to serve as a location for the summit. The offer went to Singapore, now the chair of ASEAN. The Trump-Kim summit is likely to take place in Singapore sometime in June. Singapore has been a loyal ally to the United States. And in the past decade, Singapore has appointed itself as a leader of ASEAN, raising key geopolitical issues from the conflict in the South China Sea to the maritime terrorism. As a world’s financial hub, Singapore views the stability on the Korean peninsula as a fundamental factor for its own survival.
President Trump’s choice of Singapore is strategic, as it symbolically portrays the US position as an impartial party in the North-South divide, by not picking either North or South Koreas as the venue of the summit. Moreover, the US seems to give a prominent part for ASEAN to play in the ongoing balance of power shift on the Korean peninsula.
How can Singapore, or indeed ASEAN, maximize this opportunity in putting itself at the forefront of the Korean issue? ASEAN must find a way to upgrade its engagement with North Korea from this point onwards. Apart from being a member of ARF, North Korea in 2008 acceded to ASEAN’s Treaty of Amity and Cooperation (TAC), the cornerstone treaty for ASEAN’s external relations. But the level of the relationship between ASEAN and North Korea has not progressed beyond the ARF and the TAC.
It is therefore timely for Singapore and ASEAN to hold a serious dialogue with North Korea regarding the latter’s status as the organization’s full dialogue partner. This could lead to an establishment of a summit-level relationship between ASEAN and North Korea. In the past, North Korea was left out from other regional initiatives, including the East Asia Summit. Inclusiveness could help North Korea to familiarize itself with the regional norms and practices, and ultimately to become a responsible member of the world society.
Pavin Chachavalpongpun is associate professor at Kyoto University’s Center for Southeast Asian Studies. 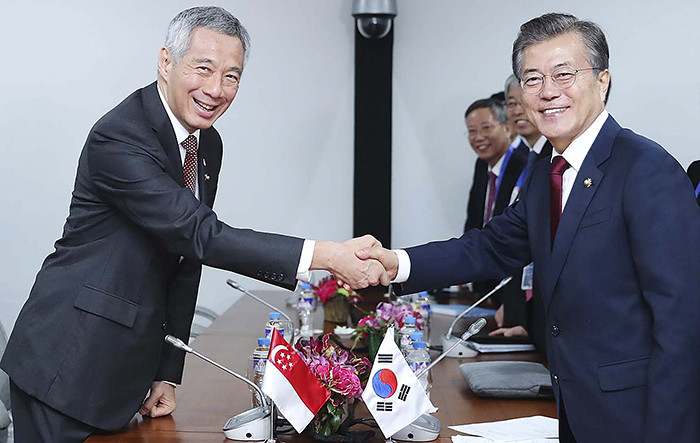