Submitted on Fri, 4 May 2018 - 03:38 PM
Kornkritch Somjittranukit
Instead of investigating human rights violations, the National Human Rights Commission (NHRC) has been mandated to defend the image of the military government and this new measure is likely to be permanent, said Human Rights Watch.
Two weeks ago, What Tingsamitr, the NHRC chairperson, told the media that the commission is initiating an investigation into the human rights report recently released by the US State Department. What stated that according to the 2017 Constitution, the NHRC is responsible for scrutinising reports on human rights in Thailand. The Commission must decide the accuracy of such reports, and publicly release their evaluations. 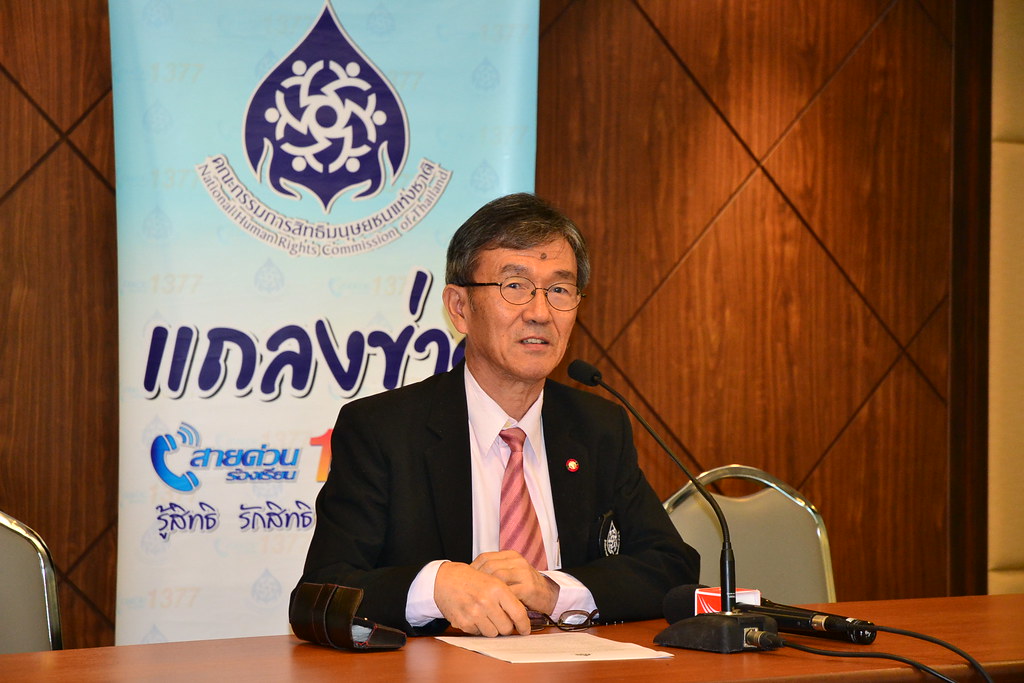 What Tingsamitr, the NHRC chairperson
The National Council for Peace and Order (NCPO) has added this new responsibility of the NHRC into the Constitution, raising the question of whether the junta is turning the independent watchdog organisation into a government spokesperson on human rights issues.
In early February, the NHRC initiated an investigation into two human rights reports published by Human Rights Watch (HRW). The reports condemned Thailand for its failure to eliminate human rights violations including extrajudicial killing, human trafficking, labour abuse and enforced disappearances.
Angkhana Neelapaijit, a commissioner, told Prachatai that the NHRC already expressed concerns to the NCPO that the commission should not be responsible for investigating human rights reports. While the Commission believes responding to international reports is a duty of the government, not the NHRC, it has no choice but to comply with the new regulations.
“The NHRC has to investigate both reports according to the law. But the NHRC is not a government spokesperson who has the duty to clarify human rights violations on behalf of the government,” Angkhana stated. “But we will investigate as a constitutional organisation which has a duty to investigate the facts when we receive reports of human rights violations.”
Despite Angkhana’s statement, the NHRC released the investigation result on 18 April arguing that the NCPO and the NHRC have made various efforts to improve the human rights situation in the country, and that HRW used unfair information in the reports.
“The NHRC has seen that the two reports contain some incorrect or unfair facts about the human rights situation in Thailand,” read the investigation result.
However, most of the so-called “correct and fair” facts the NHRC provided in response are laws and policies that the NCPO has issued in the past few years in attempts to solve human rights issues, and do not include the effectiveness of those policies.
“Despite no specific laws on enforced disappearance or torture..., the Thai government issued the Prime Ministerial Order no. 131/2017 on 22 May 2017 to establish a commission to receive complaints about torture or enforced disappearance cases,” the Commission stated in response to the HRW reports that condemned Thailand for failing to comply with the international Convention Against Torture.
Less than a month after releasing the investigation result, the NHRC initiated a new investigation on the global human rights report by the US government. According to Sunai Phasuk, advisor to HRW Thailand, this confirms the concerns in the HRW report that the national human rights body has become a mouthpiece of the NCPO in rebutting and denying reports about human rights violations in Thailand.
Sunai said that the new mandate is likely to become the permanent charge of the NHRC which is a significant backslide for the Commission itself.
“The question would be: who’s next? This will be an endless endeavour of the NHRC. Because even the status of the human rights situation in Thailand there will continue to be concerns or criticism coming from human rights organizations, foreign governments, UN bodies. Can the NHRC issue rebuttals to every one of them? Can the NHRC afford to sink that low?,” he added.
Round Up
Angkhana Neelapaijit
Human Rights Watch (HRW)
National Human Rights Commission (NHRC)
Sunai Phasuk
What Tingsamit