Submitted on Mon, 12 Mar 2018 - 11:53 AM
Sunai Phasuk
Still no justice for Somchai Neelapaijit and countless other victims
The Thai government has allowed another year to pass without resolving the enforced disappearance of prominent human rights lawyer Somchai Neelapaijit.
Somchai, the former chairman of Thailand’s Muslim Lawyers Association and vice-chairman of the Human Rights Committee of the Lawyers Council of Thailand, was abducted on March 12, 2004 in Bangkok by alleged police officers. He has not been seen since.
Because Thailand’s penal code does not recognize enforced disappearance as a criminal offense, prosecutors only filed charges of robbery and coercion against five police officers. Their trial, hampered by cover-ups and shoddy investigations, ended in December 2015 with the Supreme Court acquitting all of them. 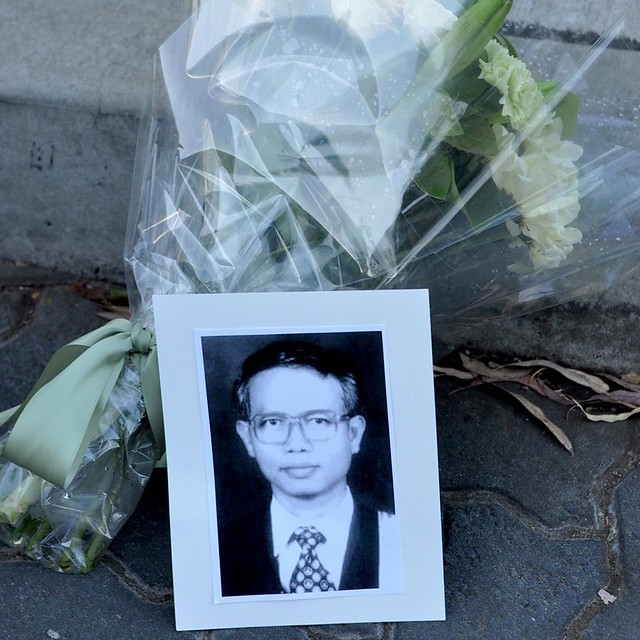 On the 14th Anniversary of Somchai's disappearance, his family places a bouquet of flowers and photo of at the spot where a witness saw him being forced into a car on Ramkhamhaeng road in Bangkok. Photo courtesy of Angkana Neelapaijit
The court also ruled that Somchai’s family could not act as a co-plaintiff because there was no concrete evidence that he was dead or incapable of bringing the case himself, setting a bad precedent that places the burden of proving enforced disappearance on the disappeared person – adding impossibility to injury.
Somchai’s case has hung over successive Thai governments as a glaring example of Thailand’s crisis of impunity for grave human rights violations. The United Nations Working Group on Enforced or Involuntary Disappearances has recorded 82 cases in Thailand since 1980. None have been resolved.
Yet the government continues to engage in practices that create conditions conducive to enforced disappearance – such as the use of secret detention by anti-narcotics units and secret military detention of political dissenters, suspects in national security cases, and suspected insurgents in the southern border provinces.
The families of Somchai and other disappearance victims need to know that their government is doing all it can to bring those responsible to justice.
Prime Minister Gen. Prayut Chan-ocha has instead sought to deflect criticism of the investigations and conceal the truth. He should act on his pledges to end enforced disappearance.
Most urgently the government should enact the Prevention and Suppression of Torture and Enforced Disappearance Bill and put Thailand in compliance with the International Convention against Enforced Disappearance. This would allow Somchai’s case to be reopened and others to be properly investigated.
Another year should not pass without us learning of Somchai’s fate.
First published on Human Rights Watch
Pick to Post
Somchai Neelapaijit
Sunai Phasuk