Submitted on Wed, 14 Feb 2018 - 02:11 PM
Surapot Taweesak
Political scientists, legal experts, academics, the media, and the general public should all unanimously declare that the National Council for Peace and Order (NCPO)’s use of Article 44 and its other orders which conflict with freedom of expression are a conflict within the junta’s own structure of governance, which has become the condition for creating conflict between the government and the people and the use of law that is self-contradictory and confusing.
The internal conflict in the system of governance is that the junta has two competing types of power. Those in power declare themselves sovereign.  If you ask under what law they claim this sovereign power, they cite Section 44, but the 2017 Constitution states that “the sovereign power belongs to the Thai people.” According to the Constitution then, the people have the supreme power and the government can only use its power within the limits of the Constitution. Under these conditions, the government cannot use its power under any laws so as to violate the rights and freedoms guaranteed by the Constitution. Therefore, Article 44 and the NCPO’s orders which contradict the 2017 Constitution should have been cancelled when the new Constitution was promulgated. 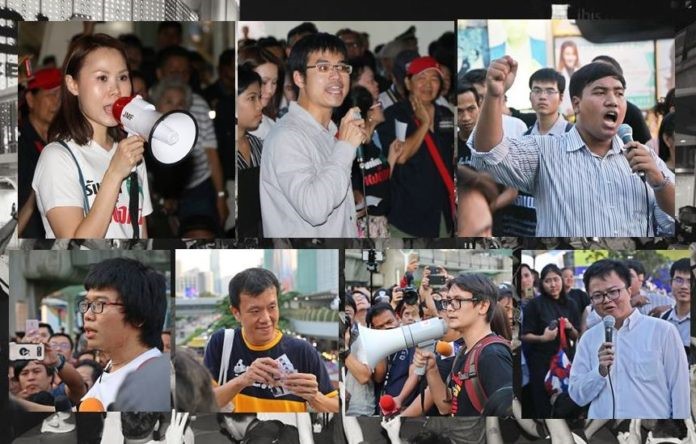 Citizens rally for democracy and are charged by state officials. Photo courtesy of Matichon
But the fact that the NCPO is still wielding Section 44 is to the equivalent of the NCPO creating two conflicting power structures, creating conditions for conflict between the government and the people.
Power exercised by Section 44 is dictatorial. Power exercised by the Constitution is democratic. (I am well aware that the 2017 Constitution is very problematic in terms of how democratic it really is, but here I want to illustrate the contrast between the two types of power.) These two governance systems in terms of political philosophy or principles are in complete conflict.
Because dictatorial power demands loyalty and obedience to the dictator, citizens have neither rights, nor power of their own, nor freedom to investigate politicians or participate in politics. But under democratic power, citizens have rights, power of their own, and freedom to investigate and enjoy political participation.
Creating a governance system with two conflicting power structures is to create a very strange system because it renders communication from the state to the people meaningless. For example, when the government talks about “stability,” the question that arises is: stability of what? If they mean stability of democratic power, this is not stable or is impossible because the sovereign power under Section 44 prevents it. But if they mean stability of dictatorial or sovereign power, there is still no guarantee that this power will endure because the people will cite the Constitution, which states that there can be no sovereign power above the Constitution, and any such power is unfounded and illegitimate.
Therefore, conflict in Thai society today is not caused by citizens calling for freedom and democracy. It comes from the NCPO’s creation of a governance system (and we don’t even know what to call it) that has two competing power structures: the sovereign power under Section 44 which violates the principle of freedom of expression; and the sovereignty of the Thai people under the constitution which guarantees freedom of expression.
The conflict caused by this dual power system is a conflict in the practices of the NCPO government itself. The dual powers that they created are causing the NCPO government to exercise power illogically and constantly in internal conflict with themselves.
For example, the NCPO declared human rights a national issue but takes legal action against citizens who peacefully protest and exercise their right to freedom of expression. While people who came out to exercise their constitutional rights to peacefully call for elections were prosecuted, another group of citizens who gathered to support a junta member were not prosecuted at all.
What is important is that no group of citizens who peacefully exercise freedom of expression should be prosecuted, because this is a right that the Constitution guarantees. Prosecuting them, therefore, is the use of sovereign power in conflict with the Constitution. 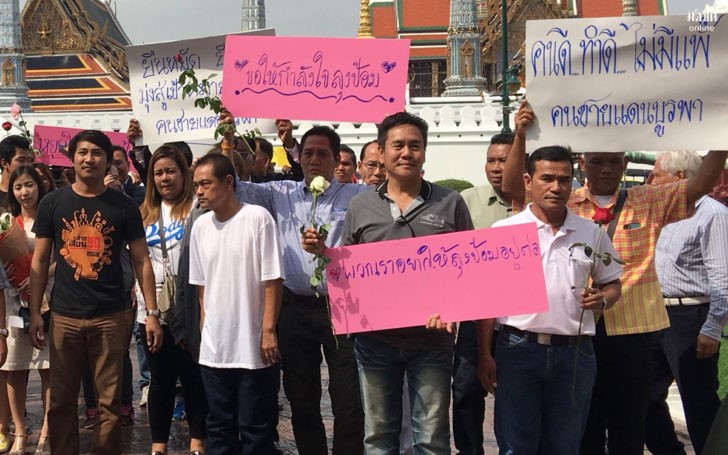 Citizens show support for Gen Prawit Wongsuwan and are not charged. Photo courtesy of Matichon
This conflicting use of power is likely to lead to the government being in conflict with citizens who exercise their constitutional rights. This reflects the conflict in the government’s own words and actions: they announced that there will be elections according to their roadmap and that they would create harmony and reconciliation in the country. In actuality, however, the junta has still not revoked its use of Section 44 and its other orders which conflict with constitutional rights.
Not revoking the use of Section 44 and other NCPO orders which conflict with citizens’ rights and freedoms guaranteed under the constitution is the equivalent of sustaining the conflict between the two power structures — and between the junta and the people. This results in the unreasonable and contradictory use of governmental power.
Communication that creates mutual understanding between the people and the junta is impossible. When communication for mutual understanding is impossible, harmony and national reconciliation cannot truly occur. Using power to silence citizens through broad-scale legal prosecution is unlikely to bring true social peace.
Our society should therefore open its eyes and be mature enough to accept the truth that citizens on all sides who exercise their constitutional right to freedom of expression are not the source of conflict. Instead, the governance structure with two contradicting power systems is the source of conflict and becomes the condition for conflict between the state and citizens of all sides, including those against the coup and those that used to support it. 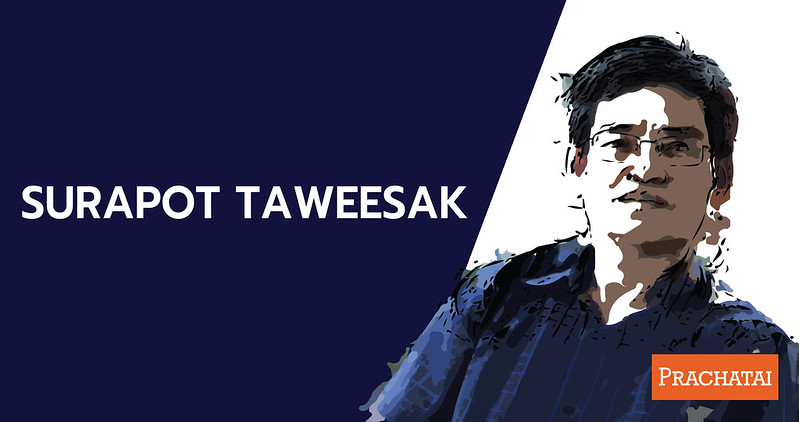