March from Bangkok to Khon Kaen to demand civil rights back

Submitted on Wed, 17 Jan 2018 - 02:09 PM
Thaweeporn Kummetha
A civil society network will march from Bangkok to Khon Kaen next week to demand the return of civil rights and public participation after these rights have been taken away during over three years of the junta. The march will also gather 10,000 signatures to propose a people’s version of the Environmental Law.
A series of activities called “We Walk, A Walk for Friendship” is organised by a group of civil rights activists called the People Go Network. The campaign focuses on four main themes: the right to universal health care, the rights of farmers, community and environmental rights, and the Constitution.
Lertsak Kumkongsak, a community rights activist and one of the event organisers, told Prachatai that the campaign is aimed at raising public awareness on the four issues where rights have become vulnerable during the junta’s regime. He expected about 200 people to join the march.
“Public participation has been very limited. It is almost impossible to propose anything regarding laws and policies because things are already dictated. Our best hope is that this march will lead to amendments to the laws. But to be realistic, I think we will at least stir debates and raise awareness among the public. We hope people will have a better understanding of the issues we’re campaigning about and that this will widen the space for the public debates that have been suppressed by the NCPO,” said Lertsak.
The activist said the campaign stems from frustrations over several moves by the junta government to enact or amend laws which gravely affect the people’s rights, while barely allowing the people to express opinions and not accepting people’s proposals. Examples are the government’s move to the Environmental Law to shorten the environmental impact assessment (EIA) process, the threat to abolish the universal healthcare system, and the move to enact an Agricultural Seed Law, which is criticised for facilitating monopolies for agricultural companies.
Although the junta’s National Legislative Assembly (NLA) is expected to enact an amendment of the Environmental Law this Friday, Lertsak said his network denounces the amendment and will gather 10,000 names to propose a people’s version of the law to the government. Hopefully, the project will be completed during the march, he said.
The campaign commences with an event on Friday, 19 January 2018, at Thammasat University, Rangsit Campus. The event comprises a play and a public forum with speakers including Jon Ungpakorn, Director of iLaw, Kannika Kittiwetchakun of the People's Health Systems Movement, and Lertsak from the Campaign for Public Policy on Mineral Resources. The march sets off from the Rangsit campus on Saturday, 20 January 2018, at 9 am after a reading of testimonies. The first stop is scheduled at Wang Noi District, Ayutthaya. There will be more activities to come along their route to Khon Kaen.
Lertsak said the group will inform the police today (Wednesday) of the planned rally so as to comply with the Public Assembly Act. He added that since the team has just announced the event to the public today, the group has not been contacted by the authorities. 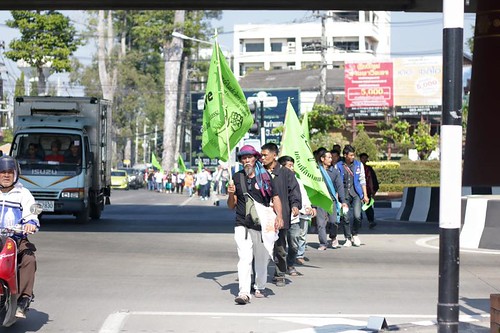