Submitted on Wed, 27 Sep 2017 - 05:50 PM
A key Thai historian has passed away peacefully. He will be long remembered as a teacher, columnist, comrade, political activist, and academic who stood against the lèse majesté law and coups d'état. 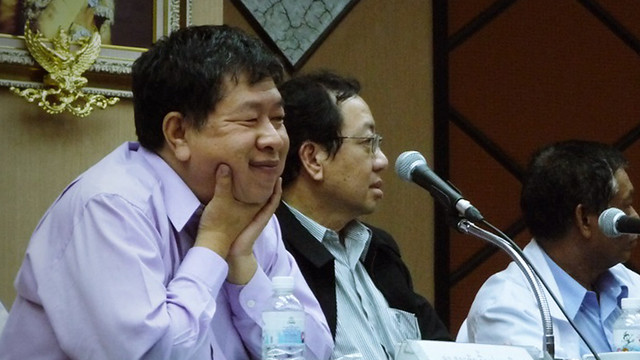 Suthachai Yimprasert
After a long fight with cancer, Suthachai Yimprasert (1956-2017), a lecturer at Chulalongkorn University’s Faculty of Arts, passed away peacefully in the early morning of 27 September 2017 at Chulalongkorn Hospital. His funeral will be held at Wat Hua Lamphong, Bangkok, from 27 September to 1 October.
Suthachai was born on 28 April 1956 to a Sino-Thai family in Nakhon Pathom Province. His involvement in politics began when he enrolled at Thammasat University. He joined the student movement and survived the massacre on 6 October 1976 before joining the Communist Party of Thailand (CPT) in Surat Thani Province with the code name “Comrade Somphon.”
After quitting the CPT, he pursued a Master of Arts in History at Chulalongkorn University and graduated in 1989. His thesis was “Political Movements against the Second Government of Field Marshal Plaek Phibunsongkhram (1947-1957).” He earned a PhD in Portuguese History at the University of Bristol, UK, in 1998 and wrote a dissertation on “Portuguese Lançados in Asia in the Sixteenth and Seventeenth Centuries.”
His master’s thesis was later published as a book “The Plan to Steal the Thai Nation” (Phaen Ching Chat Thai) and became a must-read book for students of modern Thai political history.
In addition to his role as lecturer, Suthachai was also a columnist and TV host. He wrote the column “Democracy Road” every Friday in Lokwannee newspaper and co-hosted the TV show “Democracy Classroom,” together with lèse majesté convict Somyot Phrueksakasemsuk.
He took an active stand against all coups in Thailand and opposed the controversial Article 112 of the Penal Code, the lèse majesté law. In 2008, he offered his academic position as bail for lèse majesté detainee Daranee Charnchoengsilpakul, also known as Da Torpedo, but was rejected.
In 2011, he campaigned to nullify the consequences of the 2006 coup together with the Enlightened Jurists group of progressive scholars (Khana Nitirat). He also called for the release of political prisoners.
During the last decade of his life, Suthachai was repeatedly detained. In 2010, after the Centre for the Resolution of the Emergency Situation (CRES) launched a bloody crackdown against red-shirt protesters in Bangkok, Suthachai was detained at a military camp in Saraburi Province.
During his detention, he staged a hunger strike after the authorities barred him from reading any kind of material, even textbooks.
Suthachai was also named in the controversial “anti-monarchy chart” first published in 2010 by CRES spokesperson Sansern Kaewkamnerd. The people named in the chart were shown to be somehow connected to the red shirts and the anti-monarchy movement.
Other people named in the chart include exiled anti-monarchy academic Somsak Jeamteerasakul, former PM Thaksin Shinawatra and red-shirt leader Nattawut Saikua.
On 28 April 2010, Suthachai announced he was filing a defamation lawsuit against Sansern for putting his name in the chart. On 22 March 2011, Sansern admitted to making up the chart without solid evidence.
“I was assigned to distribute the document [the anti-monarchy chart] to the mass media. The document that was distributed does not mean that those who were named in the document are involved as being in the anti-monarchy movement. But it is their connections in various ways which are for society to consider and judge for themselves,” said Sansern.
After Sansern’s admission, Suthachai withdrew the charge.
Suthachai was detained again after the 2014 coup. On 3 June 2014, he was summoned to a military camp and released the same day. He later posted on his Facebook account that the authorities asked him not to protest against the junta and to stop writing about the lèse majesté law.
“I don’t oppose only this coup. Since the coup on 6 October 1976, I’ve never seen [a coup] solve anything. They only widen the problem more and more every time. The country’s problems are solved by democracy alone,” Suthachai posted on Facebook.
News
obituary
Suthachai Yimprasert