Submitted on Tue, 14 Mar 2017 - 10:49 AM
Pawinee Chumsri, a lawyer at Thai Lawyers for Human Rights, has won the 2017 Somchai Neelapaijit Award. Pawinee urged society to action, saying that, ‘If people don’t fight, lawyers really can’t achieve anything’.
On 11 March 2017, the Somchai Neelapaijit Memorial Fund announced Pawinee Chumsri as the winner of its annual award, commending an outstanding human rights advocate. The award was presented in remembrance of the disappearance of the lawyer Somchai Neelapaijit 13 years ago.
Pawinee took the chance to acknowledge the work of other groups who dare to fight against injustice, risking prosecution, death and enforced disappearance. But society cannot be changed by any single human rights defender alone.
“The lesson I’ve learnt in my position as a lawyer is that if people don’t fight, lawyers really can’t achieve anything. Everything stems from [people’s] uncompromising bravery.”
Pawinee believes the greatest obstacle to her work is the concentration of power in Thailand’s authoritarian government. Checks and balances are not implemented in practice, with the judiciary rarely fulfilling its duty to investigate problematic laws.
The Somchai Neelapaijit Award was presented along with three other awards recognising significant contributions to human rights. The awardees were Jatupat ‘Pai Dao Din’ Boonpattararaksa, a student activist struggling for democracy; the Khon Rak Ban Koed Group (We Love Our Home), established to protect community rights from the mining industry in Loei province; and 14 Myanmar workers who have taken a chicken processing company in Lopburi to court in order to uphold migrant worker rights.
Wiron Ruchichaiwat, a representative from Khon Rak Ban Koed Group, agreed with Pawinee that obstacles to the protection of community rights come not only from the government, but from the ordinary people that make up society as well.
“The community has to chip in itself. At first, people are happy to help but as soon as there is hardship such as prosecution, people begin to withdraw. They are focused on making a living and wonder why we are making a fuss about mines. They view us as radical protesters.
“We’re trying to communicate to our brothers and sisters that what we are saying is true, that we have a right to speak. But our spirit is cut down when even those in our community don’t understand. If communities don’t take care of each other, it’s difficult to move forward,” said Wiron.
“We can think discouraging thoughts,” Wiron summarised, “But we cannot be discouraged. If we don’t fight, [our communities] will cease to exist.”
The activist finished by drawing attention to the draft Mineral Bill, a junta initiative intended to facilitate the mining industry’s activities. Wiron urged affected communities to stand united against the bill, which she believes will have disastrous consequences.
Pai Dao Din was represented by his mother Prim Boonpattaraksa, due to his ongoing imprisonment. To Prim, her son is a young adult able to see the problematic state of society, the issues that trouble villages and the distress of those who call the villages home.
“Son and mother share the same heart. Pai has a heart that cares for his community. I’m so proud of him,” Prim said.
She emphasised that the fight against these social issues will take time, since it is no easy task to make the junta understand. “If we let power be, but never object, these situations will become our everyday reality. Legal legitimacy requires conscious consent.”
The 14 migrant workers who faced off against a major chicken processing company as both plaintiffs and defendants, were represented by Yaeyae who, speaking through an interpreter, recounted the violation of their rights.
Yaeyae stated that the group’s passports and work permits remain in their employer’s possession. When the group asserted their rights through a lawsuit, the company filed a counter-lawsuit accusing the workers of burglary. During the investigation, police attempted to force the group to sign documents in Thai that they could not read.
While the 14 workers have resigned from the chicken processing factory, the legal case against them is ongoing, as does their own case demanding compensation for the company’s violation of their rights.
The Somchai Neelapaijit Memorial Fund was established in 2005 by Jon Ungpakorn, the founder of Prachatai and the director of iLaw. The Somchai Neelapaijit Prize aims to give encouragement to exemplary individuals, groups, media work and academic work aiming to shine a light on human rights abuses in Thai society. 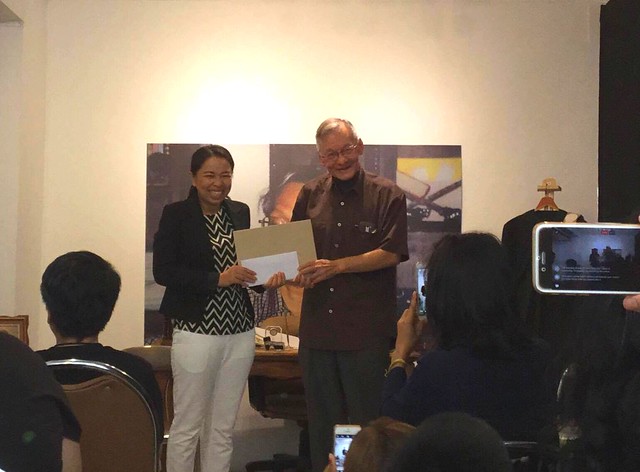