On 16 October 2016, police officers took a suspect accused of violating Article 112 of the Criminal Code, the lèse majesté law, to a police station in Koh Samui District of the southern province of Surat Thani.

The suspect is accused of posting Facebook messages deemed defamatory to Gen Prem Tinsulanonda, the current Regent of Thailand, and about the funeral of the late King.

According to a Facebook page called Southerners United, it took two days for the police to arrest the suspect. Locals physically assaulted her after she was arrested.

The suspect was later ordered to prostrate in front of King Bhumibol’s portrait, but the crowd was still unsatisfied.

The crowd only agreed to disperse after the police promised to proceed with legal procedures against the suspect. 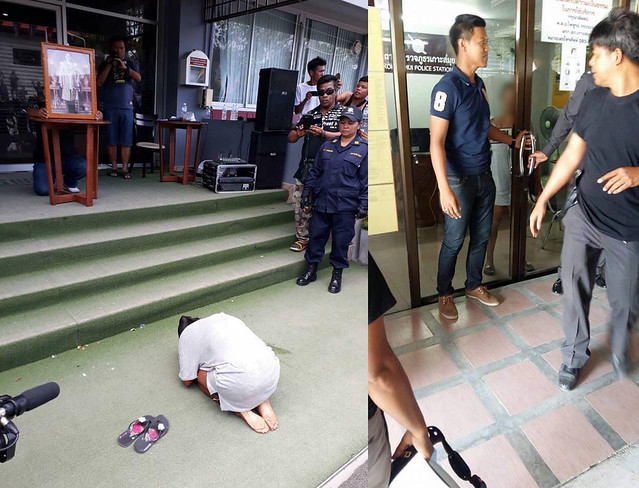 On the same day in Phuket Province, the Manager Online reported that police arrested Mano-rusdeen (surname withheld due to privacy concerns), from his house in Thalang District of Phuket.

The police accused him of using a Facebook account named ‘Phayak Rai Haeng Nakhon Koh-ann’ to post messages allegedly violating the lèse majesté law. The police also found an amphetamine pill in the suspect’s house after searching his house.

The suspect has so far refused to be interrogated by the police. He is now under custody at Tha Chatchai Police Station in Phuket.

The search was carried out after reports the shop’s owner had allegedly posted Facebook messages violating the lèse majesté law.

From the search, the authorities found that the owner of the shop was illegally lending money for interest and possessed several fake documents together with imitations of firearms.

After the death of the highly respected King Bhumibol after a seven decade long reign last week, many social media users also reported that they were harassed for not wearing black.

Khaosod English reported that a well-known cartoonist Narong Jarungthamchot, who goes by his penname Kuat Kaihuaror, wrote online that two diners at a restaurant had hissed at him for wearing grey striped shirt on 15 October. “Evil, he’s probably not a Thai, look at his shirt,” Narong quoted one of them as saying.

One eyewitness in Bangkok also reported that on 15 October, he saw a pickup truck driver shouting at a messenger on a motorcycle during a traffic jam on Ratchadamnoen Avenue for not wearing black, Khaosod English added in the report.

The controversial Article 112 of the Criminal Code, or the lèse majesté law, states that anyone who “defames, insults or threatens the king, the queen, the heir-apparent or the regent” shall be punished with up to 15 years in prison.

Many people have argued that wording of the law does not protect the late monarch. Given the hyper-royalist environment and tremendous grief that many Thai people are sharing after the recent death of King Bhumibol, many people fear that the law will be interpreted more widely.