An angry mob has stormed a roti shop in Southern Thailand, accusing the owner’s son of posting lèse majesté messages on Facebook.

At night on 15 October 2016, a large mob of at least 100 people stormed a roti shop in Takua Thung District of the southern Phang Nga Province to look for a seaman of the Royal Thai Navy who is the son of the roti shop owner.

The mob accused the seaman of posting messages on Facebook deemed defamatory to the Thai monarchy and demanded that he apologise for such action publically.

The Facebook message believed to be defamatory to the Thai monarchy reads, “Have you ever treated your father this way?”. At press time, no other alleged lèse majesté messages are found on the Facebook of the accused.

Many police and administrative officers were later deployed at the scene to control the situation.

The owner of the roti shop announced through the police amplifier that his son was not at home and that he would tell his son to apologise once he returned, but the angry mob was still unsatisfied.

Attempting to calm the situation, the police told the mob that if they find enough evidence that the message violates Article 112 of the Criminal Code, the lèse majesté law, they were welcome to file a complaint against the seaman. However, the angry crowd was adamant not to leave.

They only agreed to leave when a local navy officer and the Deputy Governor of Phang Nga arrived at the scene.

The navy officer promised the mob that the seaman will face prosecution in accordance to the lèse majesté complaint against him, adding that the shop owner’s son is a seaman of the province’s 3rd Region Division of the Royal Thai Navy.

The Deputy Governor also promised the crowd that authorities will spend 15 days investigating the matter and will inform them of the findings.

The participants of the mob then sang the Royal Anthem before leaving the roti shop. 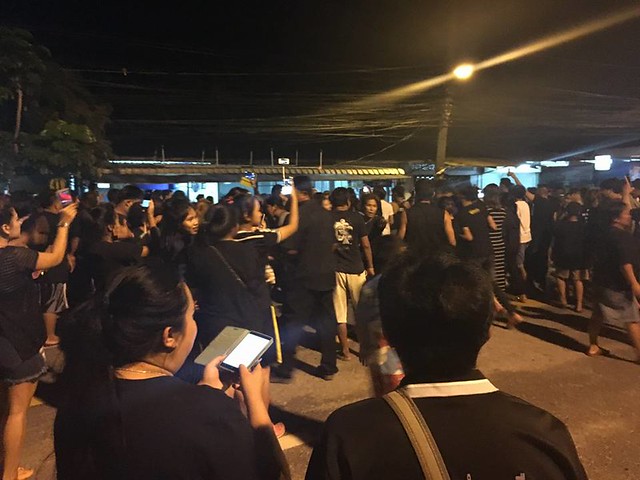