Update: Thai junta rejects involvement in Joshua Wong’s detention. Lt Gen Sansern Kaewkamnerd, the spokesperson of the Prime Minister's Office, said the government has no involvement with the detention against Wong but it is actually the judgement of immigration officials, reported BBC Thai.

The Thai authorities have detained Joshua Wong, a leading student activist from Hong Kong’s pro-democracy movement, at the request of the Chinese government.

“Joshua Wong has been confined at the immigration in Thiland because there's a request from Chinese government to Thai authority” [sic] Netiwit wrote on his Facebook status.

Netiwit reported that Wong was detained by Immigration at the request of the Chinese government. He is expected to be deported back to Hong Kong.

“I would like to ask the authority to assure that he will be sent back home safely. I hope that people all over the world will pay attention to his situation. Thank you.” Netiwit added.

Wong was invited to the Faculty of Political Science, Chulalongkorn University, to give a talk on politics of the new generation at an event commemorating the 40th anniversary of the 6 October massacre of over a hundred pro-democracy students and bystanders at Thammasat University in 1976 by military and paramilitary forces.

According to Netiwit, prior to his journey to Thailand for the 6 October event, Wong travelled to Japan and Taiwan and many other developed countries.

In response to his detention, Wong’s political group issued a statement condemning the Thai authorities.

“Demosistō strongly condemns the Thai government for unreasonably limiting Wong’s freedom and right to entry, and requests the immediate release of Wong. In the meantime, we request the Hong Kong Immigration Department’s assistance in assuring Wong’s safety,” stated Demosistō. 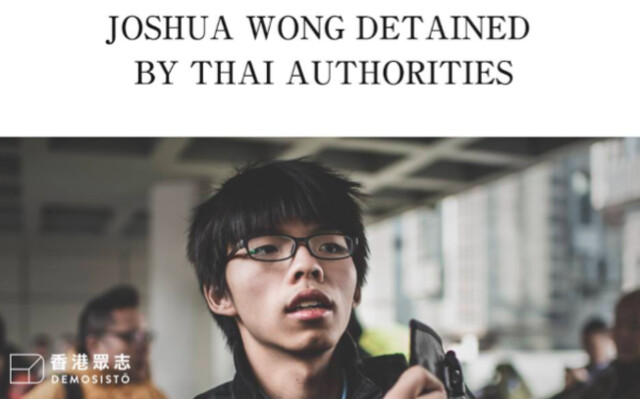