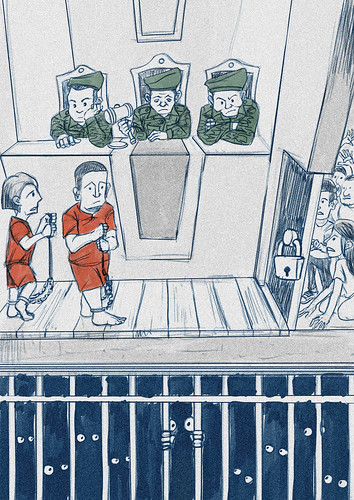 NCPO Head Order No. 55/2016, released on 12 September, was seemingly a sign of Thailand’s improving human rights situation. The Order states that any national security crime committed after 12 September will be tried in a civilian court, rather than a military court (read the text of the Order here).
During the two years of the junta regime, 1,811 civilians have been tried in military courts. Most were charged for weapons offenses, but the total includes opponents of the junta facing charges under Article 112 for lèse majesté; Article 116 for sedition, or NCPO Order No. 3/2015 for violating the junta’s ban on public gatherings.These defendants were unable to appeal their cases under the military justice system. Rights advocacy groups have repeatedly urged the junta to stop trying civilians in military courts but with little response from the junta until now.
But then without any warning, the junta issued NCPO Head Order No. 55/2016. But is Thailand’s junta really moving forward to democracy? Will this order improve the country’s human rights situation? According to various experts who closely follow Thailand’s human rights situation, the order does not necessarily mean the junta is becoming more democratic.

Pimsiri Petchnamrob, a representative of FORUM-ASIA, believes that the motive behind the junta’s order is a follow-up session of Universal Periodic Review (UPR), which will be held on 23 September. The UPR is a mechanism used by the United Nations Human Rights Council (UNHRC) to review human right situations in countries across the world.
In the UPR in May, various countries urged Thailand to stop trying civilians in military courts, including the Netherlands, Greece, New Zealand, Norway, the USA, Australia, Belgium, Canada, Costa Rica, the Czech Republic, Germany and Luxembourg. By issuing Order No. 55/2016, the junta will therefore gain significant credibility from the international community.
“The junta may believe that it can control the country’s situation now that the draft charter has been passed by referendum. It might want other countries to see it as progressing towards civilian government,” Pimsiri told Prachatai. “Meanwhile, the junta still has other mechanisms [to suppress the opposition]. Order No. 13/2016, the suppression of influential figures, is still there and Article 112 (the lèse-majesté law) still exists as always”
However, Foreign Minister, Don Pramudwinai, has denied that junta’s order is the results of international pressure, saying the junta issued the order because the country’s situation is much better. 'He also said that he has been informed about the revocation order a month before it was announced.

A political suspect (name withheld), who has been tried in a military court, does not believe that the junta really wants to strengthen freedom of expression or democracy. She told Prachatai that the junta merely wants to reduce the burden on military courts, which have to deal with too many cases with very limited human resources.
“I have talked to a prosecutor’s assistant. He said that military courts right now are overloaded. Previously, the courts only took care of cases involving soldiers, but after the coup, all cases of national security have been added while the number of court staff remains the same. So I think that the order [55/2016] might merely aim to reduce the burden on military courts but doesn’t yield any tangible benefit to people,” said the suspect.
However, the suspect is optimistic about the recent order as she feels more comfortable fighting a case in a civilian court than a military court. But she believes injustices will still occur in civilian courts as long as the junta remains in power and can influence the justice system
“If I had to choose between civilian courts and military courts, I can defend myself more comfortably and receive more justice in a civilian court. However, even though the order restores the role of civilian courts, everything is still in the junta’s control and so it might not make any difference,” the suspect added.

Yingcheep Atchanont, a worker at the human rights advocacy group iLaw, pointed out that the trying of civilians in military courts is just the tip of the iceberg. The real problem suppressing freedom of expression in Thailand is a number of undemocratic laws issued by the junta.
Yingcheep revealed to Prachatai that he does not see the recent order as a significant sign because many political activities, like gathering in public in groups of more than five people, remain criminalised. He said the junta should abolish these unfair rules, rather than just transferring all cases back to civilian courts.
He further explained that in principle, new laws should have a retroactive effect if they yield benefits to defendants. But Order No. 55/2016 states very clearly that it applies only to crimes that occur after 12 September 2016.
Yingcheep’s argument is supported by Winyat Chatmontree, a lawyer who has pleaded the cases of various anti-junta activists. Winyat said that the order barely improves Thailand’s human rights situation since NCPO Orders No. 3/2014 and 13/2016 are still in force and not covered in the recent junta's order. The junta, therefore, has full power to arbitrarily arrest the opposition. He stated that junta should cease all prosecutions against political prisoners, suspects and defendants in order to create real social reconciliation.
*Note: An earlier version of this article contained an error concerning the UPR process.  This has now been corrected.
Round Up
iLaw
junta 2014
Lèse-majesté
military court
NCPO Order No. 13/2016
NCPO Order No. 3/2015
sedition law
Thai Lawyers for Human Rights (TLHR)
Winyat Chatmontree
Yingcheep Atchanont

Dry fasting to be escalated further in 3 days if demand not met, says lawyer