After the deputy junta head promised to organise nationwide debates on the controversial draft charter, a well-known anti-junta activist group challenged the junta-appointed constitution drafters to a debate.

The letter invites CDC members to debate with the NDM on the controversial junta-sponsored draft constitution on 31 July 2016.

Amorn said that the CDC is ready to debate with all parties, but will have to consult first, adding that the debate should be fair and should not cause conflict.

The CDC spokesperson added that the National Council for Peace and Order (NCPO), the formal name of the Thai junta, does not suppress freedom of expression as the public referendum on the draft constitution is drawing near and many civil society groups have criticised it.

Earlier, Gen Prawit Wongsuwan, the deputy junta head and Defence Minister, on Wednesday, 20 July 2016, told the media that the regime will organise debates about the draft constitution ahead of the draft charter referendum nationwide.

The deputy junta head said that he authorised provincial governors and officers of the Election Commission of Thailand (ECT) to open such debates, adding that it would be open for participants from across the political spectrum.

“I have ordered [the authorities] in all provinces to organise debates on the draft constitution, which will be supervised by the ECT and the provincial governors,” said Gen Prawit.

When asked if government has any plan if the draft constitution is rejected through the referendum, he vaguely said that the NCPO will amend a certain constitution, but did not specify which one. 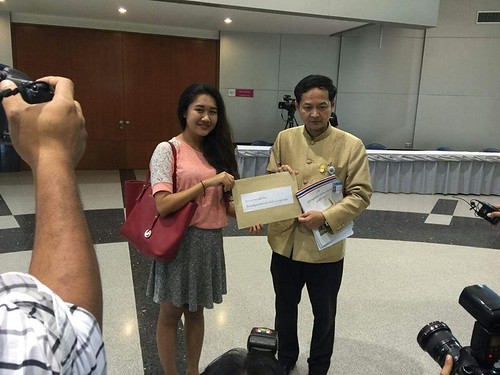 Chanoknan Ruamsap, key member of the New Democracy Movement, hands their letter to the CDC spokesperson on 21 July 2016