After a stand-off with anti-junta activists over leaflets criticising the junta-sponsored draft charter, the Thai authorities say that the leaflets cannot be distributed as they distort facts about the draft.

Somchai Srisuthiyakorn, of the Election Commission of Thailand (ECT), on Thursday afternoon, 14 July 2016, told the media after a meeting with the Constitution Drafting Committee (CDC) that leaflets entitled ‘7 Reasons Not to Accept the Draft Constitution’ are not allowed to be distributed.

He said that the leaflets published by the New Democracy Movement (NDM), a well-known anti-junta activist group, distort facts about the draft constitution specifically on the policies for universal health care, 12 years of free schooling and allowances for senior citizens.

“The ECT and CDC have agreed that the leaflets distort facts [about the draft constitution]. Therefore, they cannot be distributed to the public and people who distribute them may be charged,” said Somchai.

The ECT added that people who have shared or posted electronic copies of the NDM leaflets must remove them from the internet.

Somchai, however, told the media that his statement is not the final decision of the ECT and the CDC to outlaw the NDM leaflets, but maintain that it cannot be distributed.

On the same day, Cholticha Jang-rew and three other NDM members submitted a letter to the Thai authorities at Parliament while the ECT and CDC were meeting.

The letter demands that the CDC and ECT clarify in detail what content of the NDM leaflets ia deemed as a distortion of the facts and asks why the ECT allows the authorities to intimidate people who possess or distribute the leaflets.

The NDM letter also states that the CDC and NDM are parties in the conflict. Therefore, the ECT should consider opinions from both sides before reaching a conclusion in the matter.

Under the controversial Article 61 of the Draft Referendum Act, anyone who publishes or distributes content about the draft constitution which deviates from the facts, contains rude and violent language, or threateningly discourages voters from participating in the referendum, could face up to 10 years imprisonment, a fine of up to 200,000 baht and loss of electoral rights for five years. 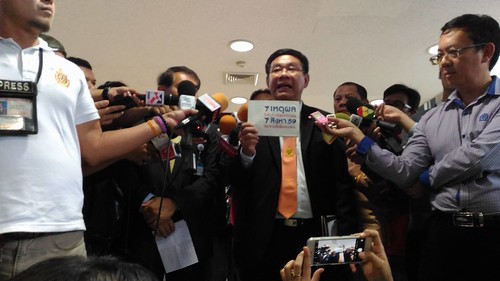