Prachatai on Friday celebrated, under martial law, its 10th anniversary as a non-profit alternative online media in Thailand.

About 60 guests joined the event to celebrate its 10th anniversary on Friday night.

The event was by invitation only and kept secret until Friday night for fear that the junta’s National Council for Peace and Order (NCPO) would force the cancellation of the event. 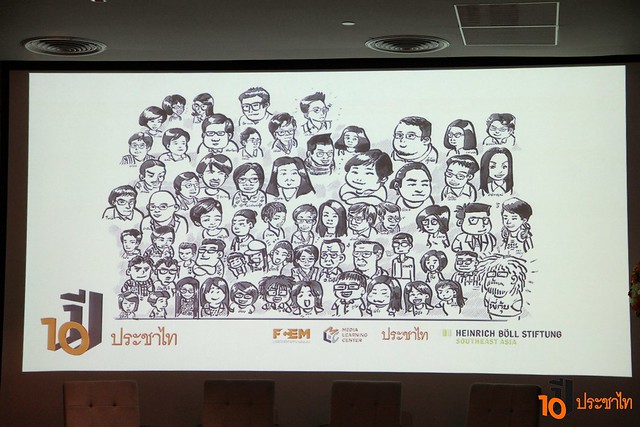 Prachatai initially planned to organize an open event to celebrate its anniversary in October 2014 but due to the junta’s tough crackdown on public seminars and events, the organizers decided to postpone the event and changed the format.

The welcoming speech by Sureerat Treemanka, the president of FCEM, was followed by short speeches by Prachatai/FCEM founder Jon Ungpakorn, Somkiet Chantarasima, the first editor of Prachatai, and FCEM Director Chiranuch Premchaiporn.

Tyrell Haberkorn, in a video presentation, presented her book “Voice of a Free Media,” which is composed from interviews with 25 Thais and 16 foreigners involved with Prachatai. The book focuses on the outlet's successes and failures in the past ten years and the prospects for the future.

This was followed by a speech entitled A Decade of Prachatai by Prof Nithi Eawsriwong.

Prachatai will publish another report on the content of the presentation, panel discussion and speeches on Saturday.

Sunai Phasuk said Prachatai has been providing space for news which is not available in the mainstream media on issues which are underreported under martial law.

“Prachatai is one of the few remaining outlets that has been demanding accountability on part of the government,” said Sunai. “Prachatai should re-open the web forum to provide space for the exchange of ideas with its audience and wider society. This is something I really miss at Prachatai.”

Pravit Rojanaphruk, The Nation senior reporter, said Prachatai has an instrumental role in opening the forum for alternative ideas which are very limited in the mainstream media. It has been the most comprehensive and persistent and has a clear anti-coup stance.

“As the way forward I wish that Prachatai would try to reach out to a wider audience who might not agree with Prachatai, but it has to prove that it will not sacrifice its ideals,” said Pravit.

Yaowalak Anupan, Head of Thai Lawyers for Human Rights, said “When I think of Prachatai, I think of a courageous media outlet, a free media that give voices to the new generation. After the coup, however, I think that Prachatai has been stepping back, but it is a real challenge for Prachatai to decide whether to maintain its ideals during this time. One thing which I miss the most is the web forum which allowed people to freely engage in dialogue. It would be great if the web forum could be opened again.”

Isariya Paireepairit, co-founder of Siam Intelligence Unit and Blognone.com, said “I think the biggest challenge for Prachatai is to come up with a business model in order to sustain itself. In the past, Prachatai staff might have ignored this because they think of themselves as journalists and business is not their specialty. However, Prachatai has to live and learn how to sustain itself amid the challenges, including financial ones. Moreover, I think Prachatai should also produce more economic news which is directly related to society.”

Prachatai was founded in June 2004 under the Foundation for Community Educational Media by Jon Ungpakorn. The news which made Prachatai well-known concerned the Tak Bai Massacre in early 2006. Prachatai’s major breakthrough was its role as the only anti-coup media during the 2006 coup. Prachatai English was founded in May 2007 as a volunteer-based online media after Prachatai realized that non-Thai and foreign media lacked sources to present anti-coup voices.

"The Principle of Prachatai English" by Pitch Pongsawat