Submitted on Fri, 26 Sep 2014 - 09:58 AM
Hoang Duong Thien
Can Tho - Vietnamese civil society groups gathered in preparation for an upcoming official public consultation about the Don Sahong dam in Lao. Its poor Environmental Impact Assessment (EIA) has raised some major controversies and concerns over the trans-boundary impacts in Cambodia and Vietnam, according to reports from Can Tho city, Vietnam, in the Mekong delta.
After the 20th annual Mekong River Commission (MRC) meeting on 26 June in Bangkok, even though the Laos government did not officially recognize the Don Sahong dam as a Mekong mainstream dam, the MRC agreed to conduct a public hearing and exclusive consultations among the neighbouring Mekong countries.
In order to prepare for the forthcoming official Procedures for Notification, Prior Consultation and Agreement (PNPCA) meeting in Vietnam, the Vietnam River Network (VRN) together with local authorities recently held a pre-public hearing on 21-22 August in Can Tho City, in the Mekong Delta.
More than 150 participants at the meeting represented local authorities, academics, experts, community leaders, the Women’s Union, the Youth Union, the Farmers Association, and Can Tho University. 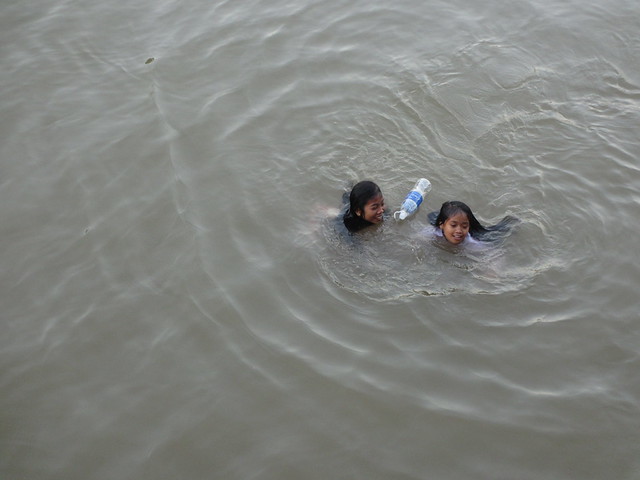 Swimming on the Mekong River (Don Det, Siphan Don, Laos)
The PNPCA implementation process
Don Sahong dam is a run-of-river hydroelectric facility. Its developers are Mega First Corporation Berhad and the Lao Government, with Pöyry company as technical consultant. It will be located in Siphandone, Champasak Province of Lao PDR. The dam area is part of the downstream Mekong River, located at the end of the Hou Sahong channel between Don Sahong and Don Sadam islands. Most of its 260MW electricity generation capacity is expected to be exported to Thailand and Cambodia.
In terms of environmental impacts the dam will potentially cause an imbalance in the river, affecting the well-being of the Mekong people. The Lao government is obliged to conduct a PNPCA in neighbouring countries within six months, according to the 1995 Mekong River Commission Agreement for sustainable development of the Mekong basin.
It has been almost nine years since the Memorandum of Understanding on the Don Sahong Dam was signed between Mega First and the Lao Government in March 2006, until the day of feasibility survey for the project. The Lao Government does not recognize Hou Sahong as a mainstream dam on the Mekong River. However, Le Anh Tuan, Associate Professor and Deputy Director of the Dragon Institute, stated in his representation “The Hou Sahong channel receives and releases water in the mainstream Mekong, so it’s a Mekong mainstream dam”.
Moreover, Hou Sahong plays a very important role in the dry season (from March to July), when it becomes a major fish migration channel, especially for Pangasius krempfi. Therefore, the Don Sahong dam will greatly contribute to the extinction of Mekong fish. Tuan also said that the Lao Government should follow the PNPCA process as required by the MRC Agreement 1995 and respect neighbouring countries to achieve sustainable development together.

The proposed Don Sahong Dam is situated on the Mekong River in Siphandone area of Champasak Province, southern Laos. It is located less than two kilometers upstream of the Laos–Cambodia border Photo courtesy of Chiangrai Times
Poor EIA report on Don Sahong dam
More importantly, Nguyen Huu Thien, a freelance researcher, pointed out that the environmental impact assessment (EIA) of the Don Sahong dam, provided by Pöyry, a Finnish international consulting and engineering company, was poorly conducted with insufficient evidence.
He pointed out that, first of all, the fish impact mitigation method, called “fish transportation”, means putting fish on a truck and carrying them upstream over the dam, which is not a natural fish migration. Don Sahong dam is crucial for fish migration, and if the 32-meter high dam is built then the fish will not be able to migrate. The proposed fish ladder is also proven to be unsuitable for Mekong fish.
Second, the report did not include mention of the cascade impacts from the Xayaburi dam and other upstream dams in China as well as trans-boundary impacts. Only five villages at the construction site were consulted and involved in the EIA study.
The last point is that the hydraulic statistics were collected in Pakse, which is 150 kilometres upstream from the project site, and there was no downstream assessment. The Mekong River is a unique international river with a total amount of water in the rainy season (August - September) 30 times that in the dry season (March - April). Only five channels of the total of 17 in the proposed dam site were studied: Hou Sahong, Hou Sadam, Hou Chang Pheuk, Hou Chang Pheuk Noi, and Hou Wai. Thus, the results of the study are very unreliable.
Moreover, saline intrusion and lack of fresh water has already threatened parts of southern Vietnam such as U Minh Forest (meaning ‘dark and cloudy’), a huge mangrove forest covering 1,000 square kilometres of Cà Mau and Kiên Giang provinces, the largest mangrove forest in the world after the Amazon rainforest.
North U Minh forest was recognized as a National Park in 2002. It is the home of about 243 species of plants and 24 species of mammals belonging to 10 families and seven orders. Ten of these 24 mammal species are nationally or globally threatened, including four listed in the Red Data Book of Vietnam (2000), five listed in the IUCN Red List (2000) and five listed in the Convention on International Trade in Endangered Species of Wild Fauna and Flora (CITES). The U Minh forest used to be very humid, even in the dry season; now has become very dry throughout the year. In March of this year, the National Park even had to close for fire prevention. 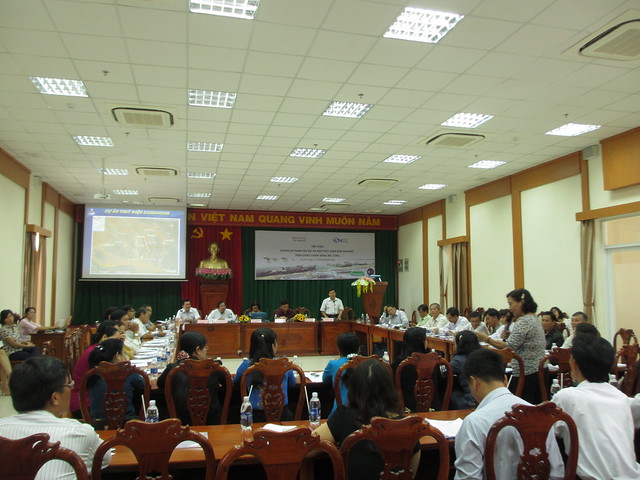 The public hearng in Can Tho city
Towards effective public hearings in the Mekong
With regard to the principle of prior consent, local leaders and association representatives expressed the view that even if the presented EIA is official, they have not been informed much about the Don Sahong dam. They can hardly imagine that local farmers, who are also stakeholders, can possibly know about the positive or negative impacts of the dam.
At the moment, Vietnamese farmers also agreed significant changes have already occurred in the Mekong River. For example, water levels are decreasing, there is less underground water, and saline water intrudes into their farming areas. Since the water level is lower and becoming more salty, many rice farmers in the Mekong Delta have switched to shrimp farming. A participant in the public hearing mentioned that as a consequence, women are left aside, since only men can work in shrimp farms as it seems to be heavy work.
As a matter of fact, the Don Sahong dam concerns not only the Lao government and people, but more than 18 million people who depend on the Mekong River and its delta. It is crucial that the Lao government respects and follows the PNPCA. Governments and dam developers must take public opinion from all Mekong peoples from six countries into account more seriously, not merely through conducting a public hearing.
“This year a group of Thai villagers filed a case against the Lao government over the Xayaburi dam construction” said Dr Tuan. “95% of the energy will come to Thailand, but they are strongly against the dam now, and even though Vietnam will face the most severe impacts, the voices of NGOs and the public on this issue are still very low”. Therefore, the Vietnam River Network (VRN) together with many stakeholders is trying to provide information and raise public awareness and opinions to contribute to the PNPCA meeting, and to create not only an official public hearing but one where informed Vietnamese citizens will attend. 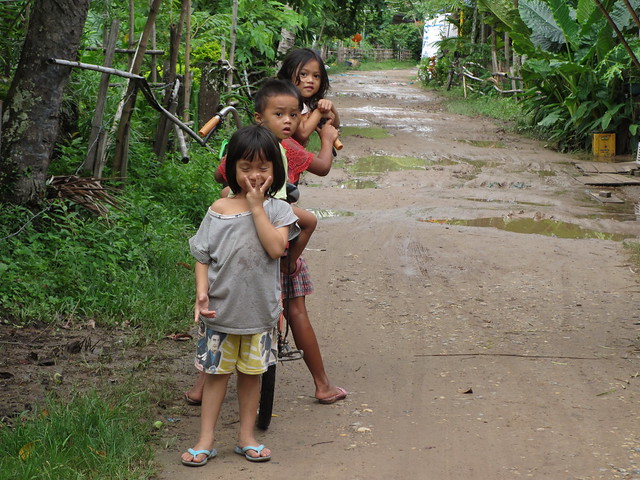