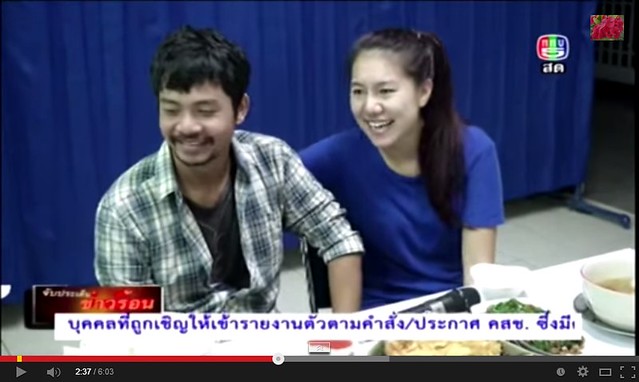 Kritsuda (R) and her boy friend (L), who was also detained smile, and laugh on TV
The spokesman pointed out that during her appearance on TV, she did not pretend to be happy because, as can be seen on the programme, her smile was natural and her eyes looked bright and lively. Her face showed that she was not forced to be happy.
Kritsuda, therefore, falsely accused the Army, giving unfounded information to the public to discredit the NCPO, said Winthai.
He suspected that Kritsuda has “changed” after she met the same kind of people who used to be around her, who are now hiding abroad, or she may have changed her mind after calculating the risk of being charged against threats from people who are affected by the information she gave to the authorities.
He added she should not have worried about the risk of being implicated because the authorities have given her a promise [not to pursue the cases against her.]
Kritsuda was detained by the military on 27 May at the house of her boss, Mananchaya Ketkaew, aka "May E.U.," in eastern Chonburi province.
Mananchaya is a low-profile red-shirt figure who represents pro-Thaksin “Red E.U.” of the red shirts in Europe. The group’s main activity is to give financial assistance to red shirt political prisoners, victims of political violence, and fund tuition fees for children of red-shirt supporters. Under Mananchaya, Kritsuda reached out to many red-shirt political prisoners, most of them arrested after the 2010 crackdown. There has been a rumour that the group is financially supported by former Prime Minister Thaksin Shinawatra.
Read related news: Kritsuda reveals military tortured her to link Thaksin to hard-core red shirts
News
coup 2014
human rights violation
illegal detention
Kritsuda Khunasen
Mananchaya Ketkaew
NCPO
pre-charge detention
red shirt
Thaksin Shinawatra
torture
Winthai Suvaree