Home » The Art That Scratches

The Art That Scratches

Submitted on Tue, 15 Oct 2013 - 02:17 PM
Suluck Lamubol
Nitimonster, a network of young artists and activists based in Chiang Mai, wants their art exhibition to be provocative, and touch upon the hottest political issues of the day. But what they did not foresee was that their artwork would cause all the staff in the gallery to go on strike, and earn them an f-word curse from the chef in the restaurant opposite on the opening day.
“A Tale of Phantoms,” now on display at WTF Gallery on Sukhumwit 51 until Oct 31, was the second exhibition by Nitimonster. Their premier exhibition was installed in Chiang Mai last year under the theme “Invisible Men,” referring to the issue of political prisoners in Thailand.
The exhibition poster, dim pink with a demon-like creature on a black background, was inspired by the cover on the Devil’s Discus, one of the books banned in Thailand since it was published in 1964, which deals with the mysterious death of King Rama VIII in 1946. The name of the exhibition “Sing Muang” (haunting the city) is printed above the devil on the poster. 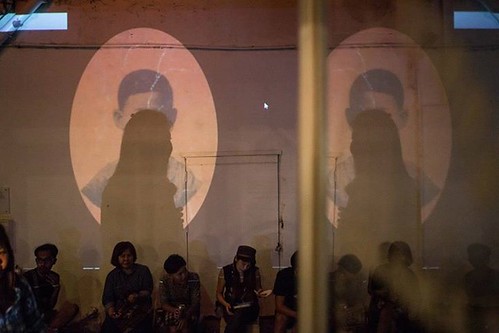 (photo credit: Sirichoke Lertyaso)
The opening of the exhibition on Oct 4 featured a series of short clips screened in front of the gallery, which includes “The Devil’s Manifesto,” stating that the exhibition was aimed at “the marginalized and the resistance” in Thai society. It was followed by four short clips taken from the 8 pm Royal news, of which the last piece was the funeral of a PAD member which the Queen attended in 2008.
The art performance wrapping up the opening was accompanied with music by the Jebpuad (painful) band. One shirtless Thai man was running around screaming out Article 112 of the Criminal Code, or the lèse majesté law, and then he filled the microwave near the crowd with bunches of chili, garlic and basil. It was heated long enough for a teargas smell to ooze out, sending the audience running in multiple directions. The chef from the opposite open-air restaurant yelled out an f-word to the group for disturbing his customers.
“We just want to disturb the space of the hipster,” said one of the artists from Nitimonster group, who requested to remain anonymous. He explained WTF Gallery was a good place to exhibit such artwork because Nitimonster wanted to send out messages to normal people who may be more apathetic than others, especially the “hipsters”.
The curator of the exhibition, who preferred to keep her name undisclosed, said the audience was intentionally aimed at wider, general public in Bangkok.
"We want to talk about art and politics to audiences who wandering in the city of angel. We want to communicate, we want to raise a political issue, and we create art."
"One of the good signs here, on the opening day is that troop of people who don’t usually attend any art opening, or go to any gallery. And I am sure this is the first art opening party for some of our guests. Positively, it’s an early step of our goal to talk about art politically. So we pointed at the flashy spot of art," she said.
The main exhibition was staged on the second floor of the gallery. On the way up, the audience would inevitably have to step on a variety of books – typical Thai secondary school textbooks and contemporary Buddhist teachings like that of V. Vajiramedhi. It was a part of an artwork entitled “stairway to heaven.” 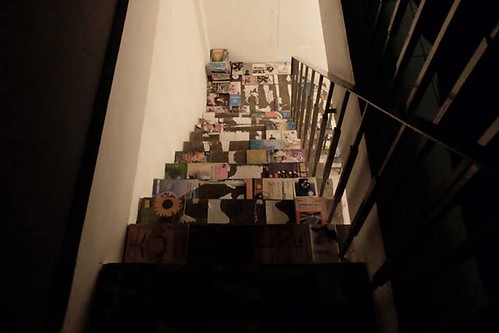 "Stairway to Heaven" (photo credit: Nitimonster)
“The housekeeper of this gallery cursed us to hell for stepping on these books” said the curator. “The staff in the gallery also all refused to go upstairs to clean unless the books were taken away.”
Books are considered rather respectful objects by Thais. They deserve to be held as high as the head and must in no way be touched by the feet or “low” objects.
The curator said she was quite surprised by the reactions. But it might have proved that the aim of the work – to challenge the norm, traditions and beliefs deeply rooted in Thai society – to certain extent may succeed. Though some books were taken off the steps, most audience members seemed undisturbed by the books beneath their shoes.
She explained further that hostile feelings came from social and cultural construction, similar to “demonization” which is the central concept of “A Tale of Phantoms.” “Nothing is evil by itself, but it was made evil,” she added. 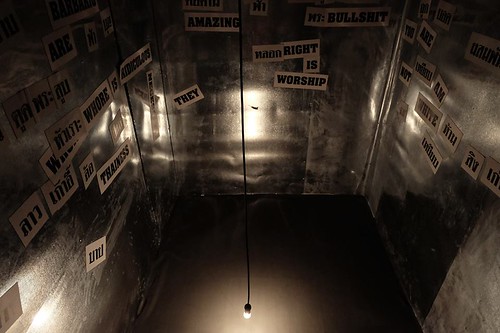 "Lexical Modification" (photo credit: Nitimonster)
“The problem with art done by activists or social movements was that it victimized what happened too much, and did not focus on the ideology or concept,” said the curator. “Why is Article 112 [of the Criminal Code, or the lèse majesté law] problematic? Why do we still have political prisoners?” she asked.
“We need to focus on the fact that we are equally human,” she said.
“A Tale of Phantoms” is on show through Oct 31, WTF Café & Gallery, Sukhumwit Soi 51
News
Art
lese majeste
Nitimonster
political prisoners