Home » A Thai Freedom Diary: Thanthawut on His Release from Prison

A Thai Freedom Diary: Thanthawut on His Release from Prison

On 1 April 2010, a group of policemen knocked on Thanthawut Taweewarodomkul’s door and proceeded to search his condo, seize his computer and other electronics, and arrest him. He was taken to Bangkok Remand Prison and was subsequently charged with alleged violations of Article 112 of the Criminal Code [“Whoever defames, insults or threatens the King, Queen, the Heir-apparent or the Regent, shall be punished (with) imprisonment of three to fifteen years”] and Sections 14 and 15 of the Computer Crimes Act (CCA) in relation to his work as the webmaster of the NorPorChorUSA website. After ten months of pretrial detention during which he was denied bail, his trial began in the Criminal Court on 4 February 2011. On 15 March 2011, the Criminal Court returned the decision that he was guilty, and he was sentenced to a total of thirteen years in prison -- ten years under Article 112 and three years under the CCA. His application for bail while he appealed the decision was denied.

In mid-2012, Thanthawut withdrew his appeal and applied for a royal pardon along with Surachai Danwatthananusorn and Wanchai Sae Tan. On 4 June 2013, Wanchai was pardoned. A month later, on 5 July 2013, Thanthawut was pardoned and he walked out of the Bangkok Remand Prison to rejoin his teenage son in freedom. Five lèse majesté prisoners remain behind bars. Surachai, who applied for a royal pardon at the same time as Thanthawut and Wanchai, is still awaiting news on the pardon. Somyot Prueksakasemsuk, Ekachai Hongkangwan, and Daranee Charnchoengsilpakul (the only female lèse majesté prisoner) are continuing to fight their cases. Yuttapoom Martnok is still awaiting trial.

One of those who did not survive to be pardoned was Amphon Tangnoppakul, also known as Ah Kong, the 61-old grandfather who was sentenced to 20 years in prison for allegedly sending four SMS messages with anti-monarchical content to the personal secretary of Abhisit Vejjajiva. Amphon died in prison on 8 May 2012. While Amphon was still alive, Thanthawut was one of those who looked after him in prison. When he died, Thantawut wrote an illuminating account of the events leading up to his death. It was a story of Amphon’s humanity, and Thanthawut’s solidarity, against the overwhelming inhumanity of the prison system.

What follows below is a different kind of story. This is Thanthawut’s account of his day of release, originally published in Thai on Prachatai on 12 July 2013. He describes the process he went through on the day of his release and his experience of the pardon. This is a story of Thanthawut’s walk through the series of barred, iron doors that led him from inside the walls of the prison to the world of freedom outside. 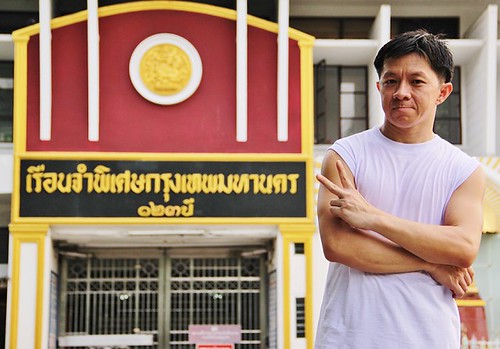 For the Record: Day of Freedom

Daybreak, Friday, 5 July 2013. After we finished saluting the flag as per the norm, my name was announced over the microphone and I was summoned to the Area 1 office. I was startled -- what was so urgent that I was summoned in the morning like this?

Many officials from outside Area 1 were in front of the door to the office. Out of the ordinary. Awww ... the Director of the Prison Custody Bureau himself. He beckoned me with his hand to come inside the office of the head of Area 1 for a conversation. For certain, I thought, there must be some issue. Slightly puzzled, I walked into the meeting.

The Director invited me to sit down. It was very quiet and the moisture of the cool air made the room cold. He gave me a slight smile.

Hey, Director, don’t tease me. I started to feel goosebumps, and a few tears escaped my eyes.

Prepare yourself, collect your belongings, cut your hair. Today you can go home to see your son.

Really, Director? (My tears flowed freely and unceasingly now.) I hugged the Director and joyfully thanked him. And I wondered: is this a dream?

As I walked out of the office, my face was crumpled, but I was full of joy. My left hand was raised above my head. Those around me looked at me questioningly. Ai hia, what is he so happy about?

When they learned the truth, everyone came to share their delight. Some grasped my hands and arms. Some hugged me. Some pinched my cheeks. Some pulled my hair. You name it. Whatever anyone wanted to do, he could do it. Because after today, I will not be here any longer.

I ran to be the first to tell Ajarn Surachai [Danwattananusorn]. Was the news really true, he asked. Was I the only one to be pardoned? I answered truthfully. Ajarn Surachai expressed his joy for me. I caught a glimpse of disappointment on his face. His name should have been included on the list of those pardoned too.

As soon as the news that I was pardoned spread, friends came to convey their happiness. They came from all over the prison, not only Area 1, my area. A lot of people knew me. Of course -- I was in for three full years. I bade farewell, wrote notes of friendship, and distributed my things. When I divided my personal belongings, I was thronged and surrounded in front and behind with people who came to ask for them. It was 3 pm by the time everything was divided.

Given the special circumstances, the warden opened the sleeping cell for me so I could bathe and get ready. I said goodbye to Ai Bum, who is a suspect in the case of murdering Ekayuth Anchanbutr along with Ai Bom, who was laying down in the cell. I carried three bags, filled primarily with books that kind people bought and gave to me. The most important was a sack of what I cherished the most: the emails and letters that I looked after closely during these three years.

A person walking through the doors of the prison with three tattered bags of documents. A person soaked in sweat, but with a smile of happiness across his face. I was sent into a large hall. Preparations for a ceremony for the reading of the royal decree were underway. An official told me to light incense in front of the large Buddha in the center of the room. I closed my eyes and sat peacefully without moving for many minutes. Tears flowed continuously from my eyes: “I cannot be dreaming this, right?”

Sorasit Chongcharoen, the commander (of Bangkok Remand Prison), walked into the large hall that had been prepared for the ceremony. He wore a fully decorated uniform, like the ones that MPs wear when Cabinet is sworn into office in front of Government House. The ceremony proceeded with solemnity and sacredness. I kneeled in front of a picture of the king. The commander read the royal pardon decree. The volume of the royal anthem increased. When it finished, the commander instructed and advised me on the path of my life after being released from prison. Photographs were taken to include in the report back to the Royal Household Bureau.

The ceremony ended. The commander sent me to be fingerprinted in order to verify my identity, which is an ordinary procedure in the prison. Then I was given a certificate of innocence. The certificate indicated that from now on, my status is no longer No. Cho. [nakthot chai, male prisoner -- trans.]. I again have the status of Nai [Mr.].

The process of documentation was complete and in order. Just a little longer, and the moment I awaited would arrive. I picked up my three bags and walked past the warden to a door that I knew well. A door of thick iron. An immense door. A door that opens and closes electrically. A door that I rarely walked through. This is the door that is closest to the door to the outside world. I only passed through this door when I went to the court. I crossed the door’s threshold. When I saw my friends waiting in front of the prison, my tears fell once again.

The warden in charge of the prisoners’ deposit accounts and the objects I left upon first entering gave me the few thousand baht left in my account. He gave me my old watch, which had long since stopped moving and was covered in rust. I signed my name in receipt. And then I walked out the door of the prison with the greatest happiness ... I am free now.